Under the bridge to Skye

I set off on a chilly but quiet morning from Kyle of Lochalsh to paddle north to Plockton, then return to Kyle.  The whole coast between the two is dotted with islands and skerries noted for wildlife and owned by the National Trust for Scotland.

At Neap tides and with almost no wind Kyle Akin (Hakon's Narrows - a hint to the Norse influence here) was quiet.  At Springs and with some wind, it's a very different and challenging stretch of water.  Ahead, the Skye bridge spans the Kyle.  This bridge, opened in 1995, replaced the Calmac ferry and reduced queues, but was very controversial because of the punitive tolls.  The eventual removal of tolls on this and all bridges in Scotland was due largely to ordinary people making a principled and obdurate stand.

You can still travel as in the words of the famous song, "over the sea to Skye" by using the Glenelg Ferry which runs from April to October.  It's by far the most pleasant way to reach Skye, and thoroughly recommended. 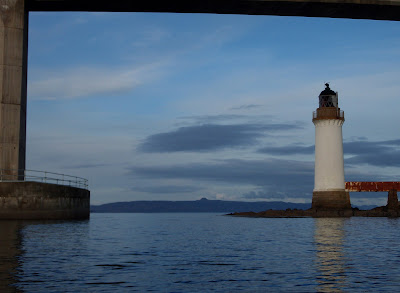 Under the bridge on the Lochalsh side stands the Eilean Ban lighthouse.  Built in 1857 by Thomas Stevenson, it's no longer lit but is still a daymark.  It's now pretty much overshadowed by the bridge.  The prominent hill in the background is Dun Caan on the island of Raasay. 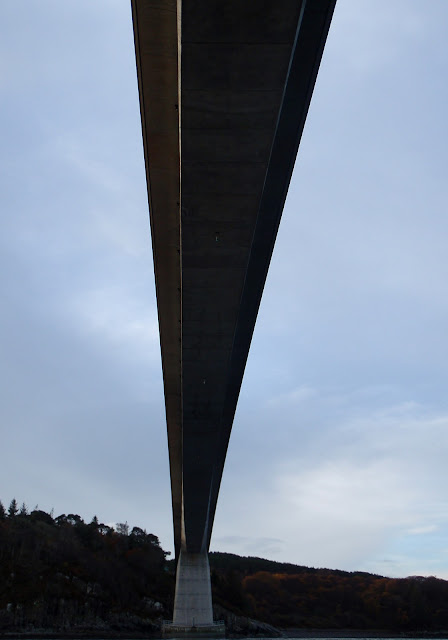 From most angles the bridge is a fairly unremarkable concrete span, but from directly below it has a undoubted slender grace.  I now left the traffic and bustle to paddle north along the coast.
Posted by Ian Johnston at 10:23