A narrow window of weather prior to a series of deep Atlantic low pressure systems gave an opportunity for a paddle, then a hillwalk the following day.  I chose the Dundonnell area and stayed at the very comfortable Sail Mhor Croft. 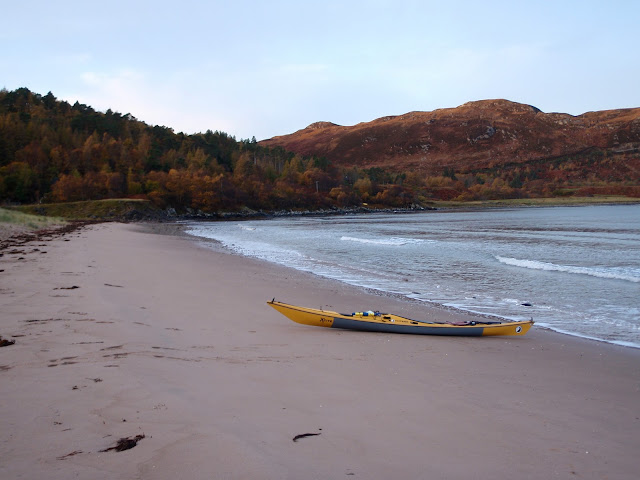 A short drive in the morning got me to the beautiful Gruinard Bay to get on the water before 8am.  As I was packing the boat, a radio programme about the poet Norman MacCaig was being broadcast on BBC Radio Scotland's "Out of Doors".  Once I paddled out of the bay, I'd be able to see some of the mountains which so inspired him.

Setting off into a chilly morning, the bay was echoing with the weird calls of Divers (Gavidae sp).  I saw at least two Great Northern Divers and (I think) a pair of Black Throated Divers.  The birds are difficult to identify in winter plumage, but their wailing calls made a very atmospheric sound. 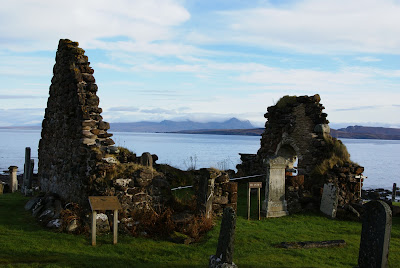 Heading west along a rocky coast, a low but powerful swell was angling in from the Minch.  The first useful landing spot was at the village of Laide, where this burial ground and ruined chapel command a view northeast to Assynt Coigach.  The chapel dates from mediaeval times and would originally have been thatched.  The burial ground is surrounded by a ditch and rampart crowned by a drystone dyke which looks much older.  The ruin was becoming unstable, but has been secured with a steel brace. 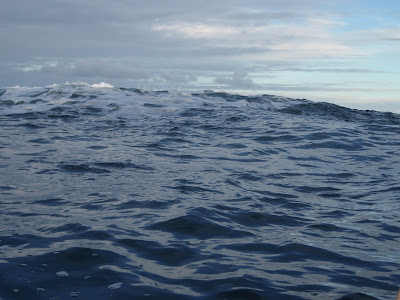 Now turning north along the coast, I had lunch and brewed a cup of tea on the beautiful beach at Mellon Udrigle before continuing north toward Greenstone Point.  The swell here was markedly bigger..... 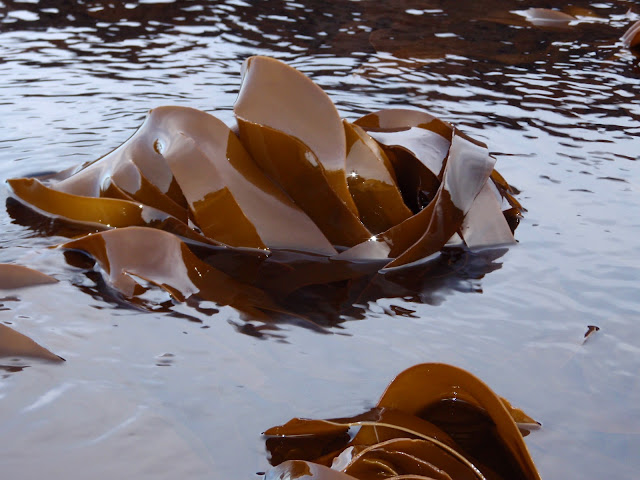 At low water (this was around Spring tides) one of the pleasures of exploring the rocky coasts is paddling among the forests of seaweed.  I think this is a type of Laminaria - I really must learn more about seaweed!
The fronds and holdfasts are incredibly tough to withstand the pounding of the waves, and so shiny that they reflect a passing kayaker with a camera!

My next stop had been considered for some time.  Anyone knowing the recent history of Gruinard Island will probably have just a slight doubt about landing.
Posted by Ian Johnston at 09:58