Into the shadows on Loch Broom

It seemed likely that the south shore of Loch Broom would give more sheltered conditions than I'd experienced along the north side, but this would involve an open crossing of 8 kilometres.  I felt that conditions were OK to make this crossing, and that it would be better to make it before the flood tide started and opposed the wind, which would make things more difficult.

An hour and a half of steady paddling in choppy conditions and I was looking back at Ben More Coigach from the shelter of Annat Bay.  The cloud had lifted from the summit ridge, which looks completely different from this angle.  Although I was now getting good shelter, I was to be in the shade for the rest of the day and it was chilly! 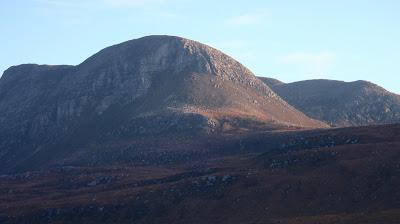 Beinn Ghobhlach (Forked Hill) is a small but prominent hill on the Scoraig peninsula which separates Loch Broom and Little loch Broom; it looks very fine from Ullapool.  Beinn Ghobhlach is also a hill particularly suited to being climbed by paddling to the base.  The hill itself and the long ridge below the western end were blocking the low angle sunlight.  One pleasant surprise was a close view of a Sea Eagle on the cliffs, such grand birds.

I crossed the narrow mouth of inner Loch Broom to Ruba Cadail (Sleep Point!) as the sun was setting.  The sunset was firing the clouds above Beinn Ghobhlach with lovely purple colours and I landed to take some of images on the SLR camera.  Only when I got home did I realise that the memory card hadn't been in the camera...... 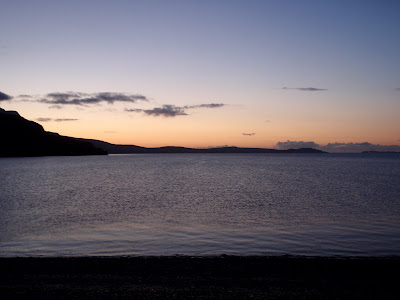 So the only photograph I have of a beautiful sunset is this one from my compact camera.  The afterglow lasted a long while, but the temperature was rapidly dropping as I arrived back at Ardmair.
Posted by Ian Johnston at 10:03