Guests in the garden at Inverkirkaig 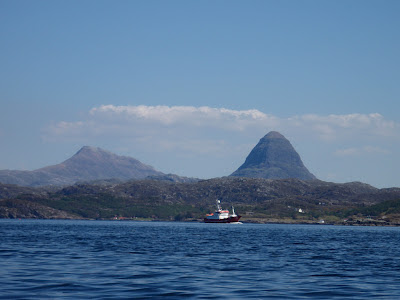 Leaving Soyea Island, my route back to Inverkirkaig first went across Loch Inver to Kirkaig Point.  A modern looking fishing vessel passed ahead of me on her way out of Lochinver; the "Kambur" (FD 454), a Faroese registered trawler. 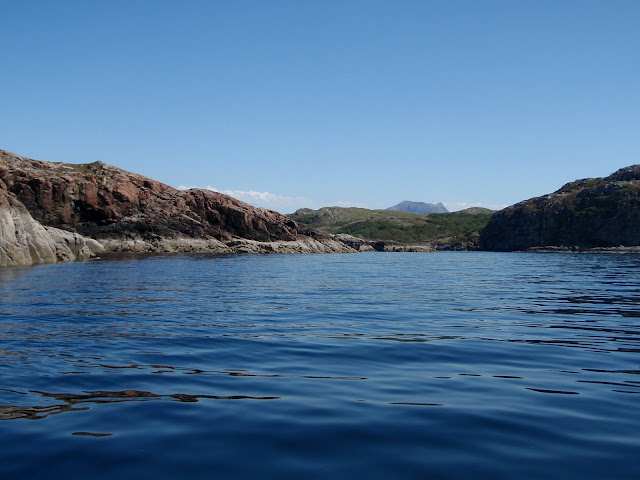 South from Kirkaig Point, the entrance to Loch Kirkaig is another which is not immediately obvious from seaward. A small skerry lies in mid channel and the enclosing rocky arms conceal views of the loch on the approach. 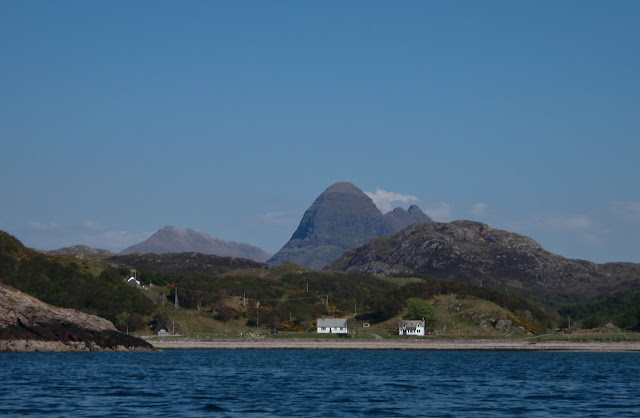 Once past the skerry the view opens up nicely.  Loch Kirkaig is shallow and dries out for a kilometre at low water.  As along much of this coast, Suilven dominates the view inland.  The name Kirkaig derives from the Norse "Kirku vik" (church bay) indicating that there was once a church in the vicinity.

In this view, our accommodation at Kirkaig Chalets can be just made out as the shoreline building at the left end of the shore. 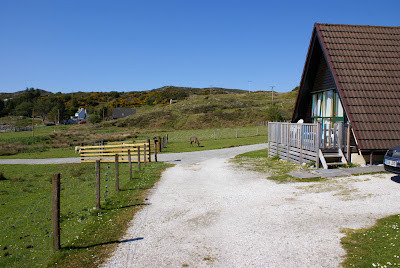 I was able to land at high water just in front of the chalet.  Carrying the boat up it seemed that we had guests... 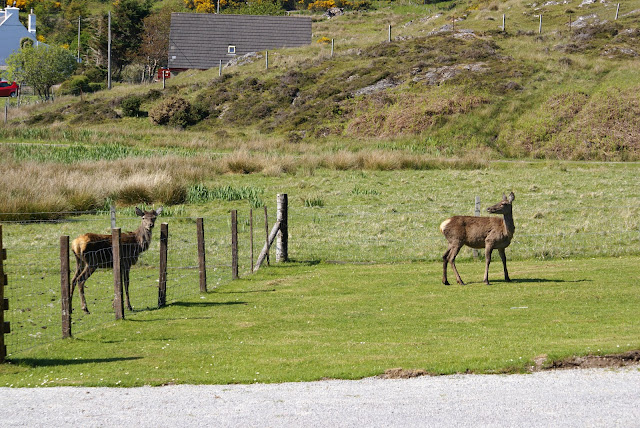 Two Red Deer were busily cropping the grass, one of them on the enclosed garden area.  Both seemed to be quite young animals and were fairly small and skinny, perhaps reflecting the lack of really good grazing on this coast. 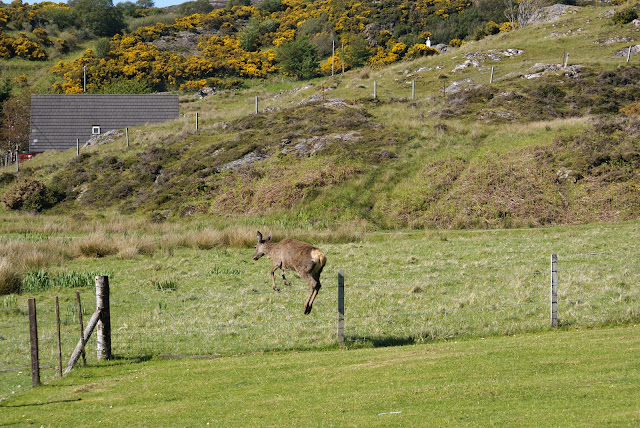 The deer were quite accustomed to being in close proximity of people and allowed fairly close approach.  Although the gate was shut and a fence enclosed the grassy garden, the method of entry and exit presented no problems!
Posted by Ian Johnston at 18:25 No comments:

The clear waters of Soyea 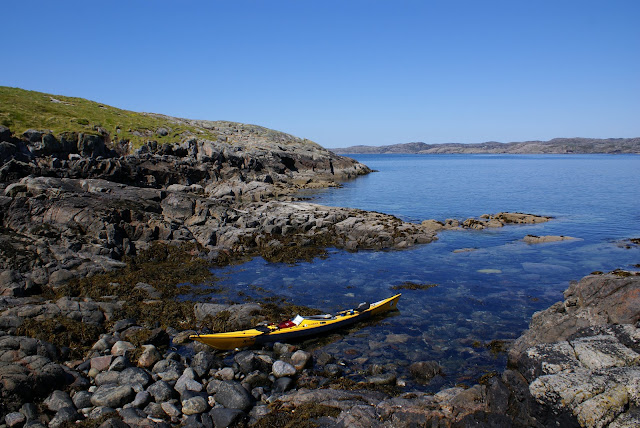 As expected from the map, the north side of Soyea appreared to offer no easy landing place.  This rocky inlet looked to be the best option, but would only be feasible in weather as calm as this.  Soyea may be a version of the Norse "Soay" (sheep island), and is certainly grassy above the rocky shoreline. 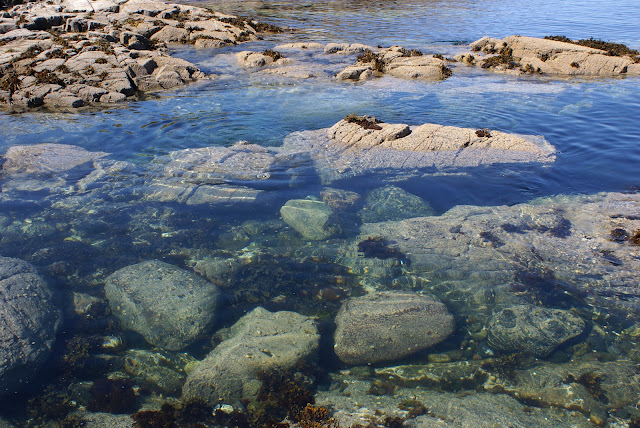 The tiny lagoon in which I landed had crystal clear water; I spent some time exploring this miniature environment. 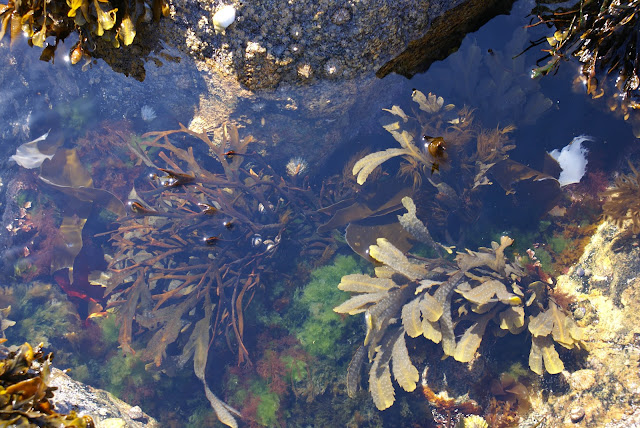 Brightly coloured weed was growing in layers between the rocks and concealing a fascinating world. 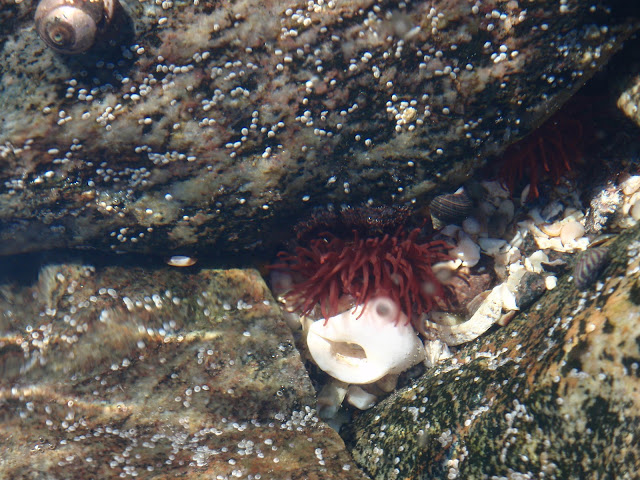 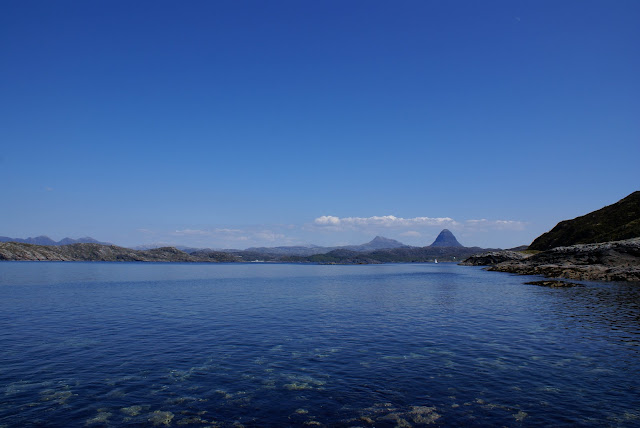 Lifting my eyes from the macro world of the rockpool, the widescreen view to Loch Inver and Suilven was a huge contrast.  It was an easy spot in which to linger but the rising tide was my cue to move on as I hoped to land at Inverkirkaig near high water.
Posted by Ian Johnston at 19:10 No comments: 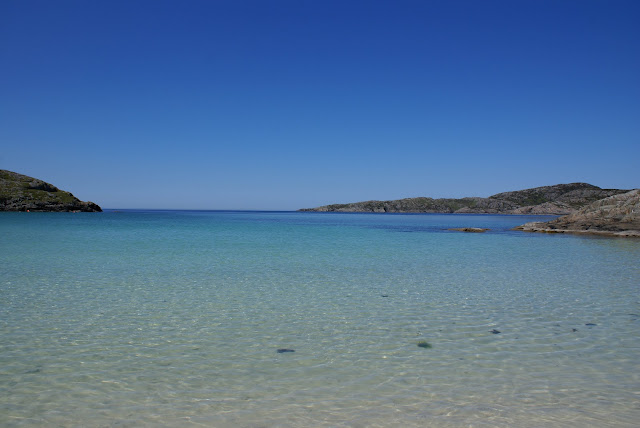 After lunch at Clachtoll we headed back to Achmelvich, the afternoon sun warm on our backs.  From here I would continue south with the intention of paddling right back to our base at Inverkirkaig. 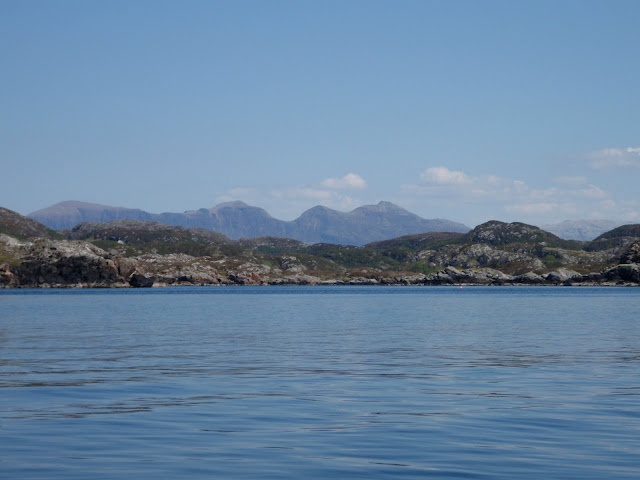 South from Achmelvich lies the narrow inlet of Loch Roe. The entrance takes a sharp double turn before opening out into a pleasant loch with woods at its head.  This is the view from seaward showing how difficult the entrance is to identify - it's there somewhere! 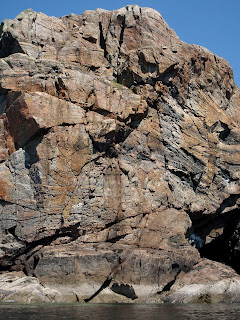 Continuing south, the point of Rubha Rodha was reflecting back the heat of the afternoon. 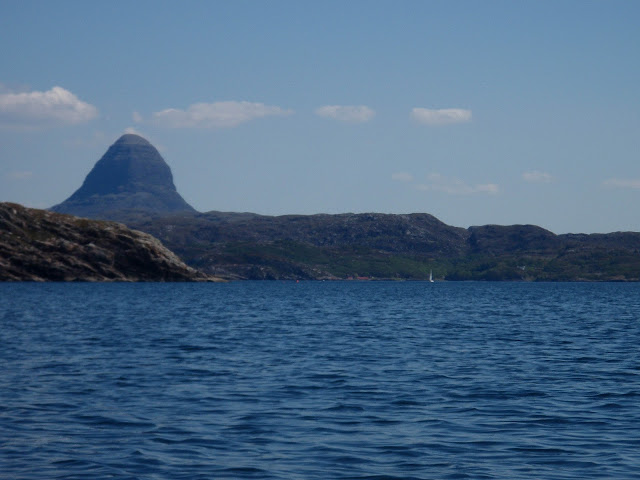 Past the point one is in Loch Inver.  The loch and town of Lochinver are dominated by the dramatic shape of Suilven (Pillar Mountain).  Suilven has a peculiar chameleon quality in that it looks completely different from different viewpoints.  From Lochinver the outline is unmistakeable. 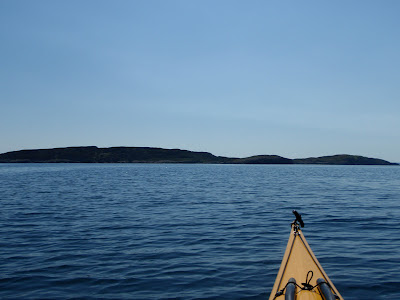 Continuing across the loch, the island of Soyea was my next destination.  Whether I'd be able to land was another matter; the map was less than encouraging with no obvious spots shown.
Posted by Ian Johnston at 19:09 2 comments:

Split Rock and a tropical beach at Clachtoll 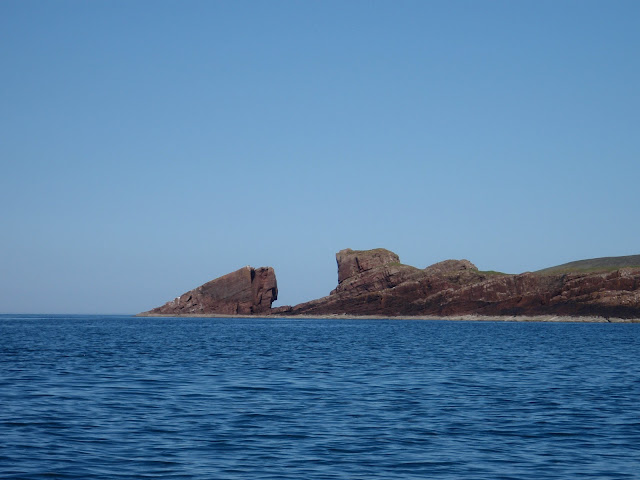 Heading north around Rubha Leumair we got our first view of "Split Rock" formation at Clachtoll.  The name Clachtoll translates as "stone hollow" which may refer to this feature. 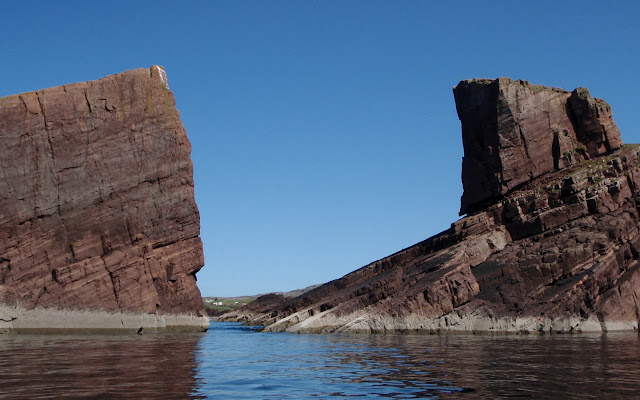 Closer in, it became obvious that there is a good gap at the base of the rock and ath half tide or above it is possible to paddle between the two parts.  The rock here is not Gneiss, but appears to be a type of Old Red Sandstone. 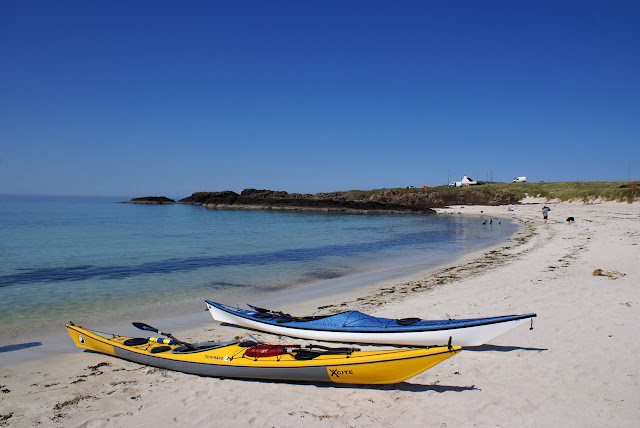 We ate lunch on yet another superb beach in the Bay of Clachtoll.  The tropical feel was enhanced by temperatures of 28 degrees Celcius - for those reading from abroad this is definitely not the norm for Scotland in May (or any other month for that matter) ! 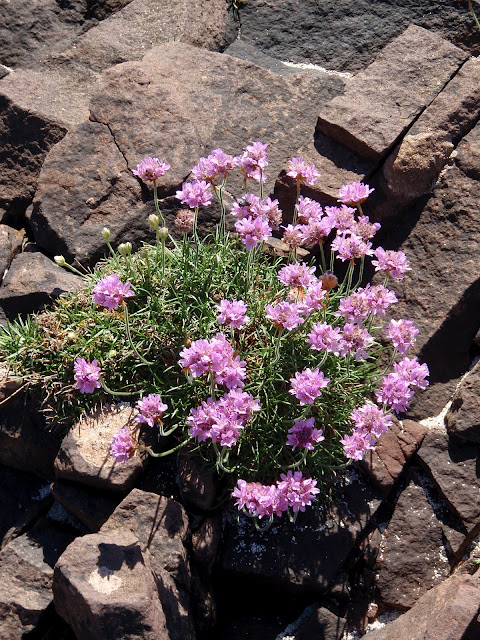 We basked in the warmth, just enjoying the moment.
Posted by Ian Johnston at 21:02 3 comments:

Turquoise, pink, white and blue - a summer morning in Assynt

The morning lived up to the promise of the sunset and was gloriously sunny. We ate breakfast outdoors and then headed just north of Lochinver, to the beautiful Achmelvich beach. There's good parking, public toilets and a small campsite here.  A trolley is handy for moving boats the 200 metres or so from the carpark to the white sand beach. 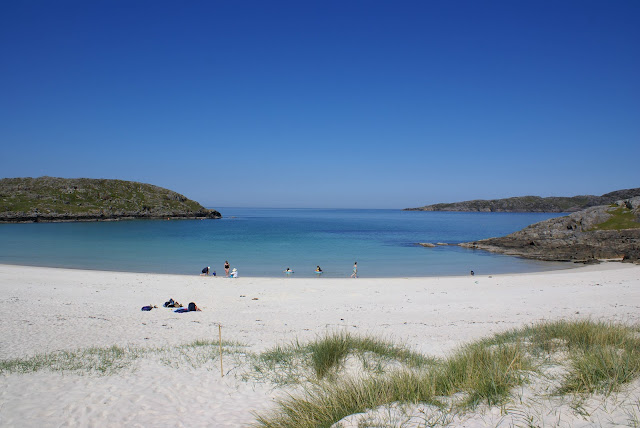 Conditions were very calm and settled, and this was something of a decider.  We planned a conservative route with plenty of get-out options and opted for shorts and single layer tops. 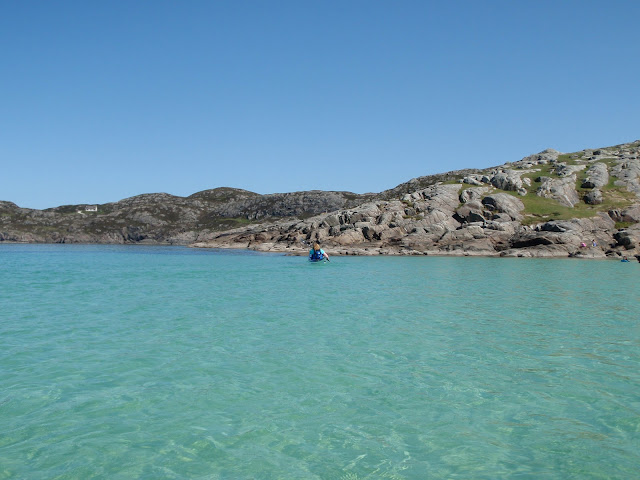 Paddling crystal clear water over white shell sand on a glorious early sumer day - what could be better? Hidden bays appear between headlands of pink and grey Lewisian Gneiss.  We envied the folk in the small cottage their view today, but we know the power of winter storms on this exposed and wild coast where the bones of the land lie so close to the surface; in the winter life here is a whole lot different. 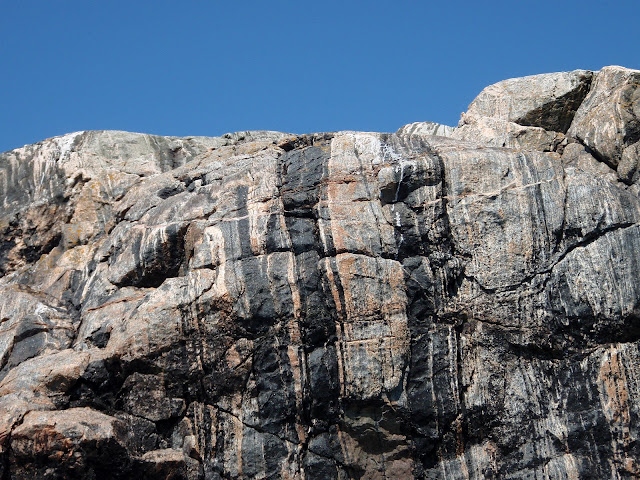 Lewisian Gneiss is some of the oldest rock on the planet, coming in at around 3000 million years old - a staggering age and perhaps summed up by the fact that no fossils are found in it because it predates all life on earth.

Named after Lewis in the Hebrides, the rock is found along the Hebridean islands and in the north west of Scotland. It is extremely hard rock which doesn't break down readily, part of the reason why the Hebrides and the north west mainland consist of bedrock with a thin skin of peat, interspersed with innumerable small lochans.

This outcrop at Rubha Leumair (? Point of the leap) shows the attractive pink, grey and black banding typical of Gneiss.

As the temperature continued to rise, the view behind us showed the unmistakable shape of Suilven (Norse - Pillar Mountain) in the haze across a glittering sea.
Posted by Ian Johnston at 21:07 6 comments:

Slowing down in Assynt

During the spell of warm sunny weather at the end of May 2012 we took the opportunity for a few days in Scotland's north west. Assynt has long been a favourite area of ours - we've been there in all weathers and at all times of the year and the place never disappoints. The weekend's forecast was outstanding and the day got warmer and warmer on the scenic drive from Inverness past Ullapool and into Coigach. 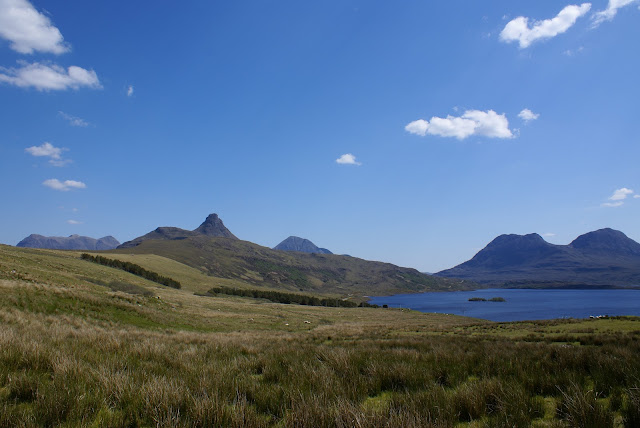 Once off the main Ullapool road, all ways to Assynt are single track roads with passing places.  Speeds drop dramatically and this is a good thing; there's time to enjoy the tremendous scenery.  This is the view from Aird of Coigach to some of Assynt's strikingly individual hills with the pointed summit of Stac Pollaidh prominent and the mass of Cul Mor to the right. 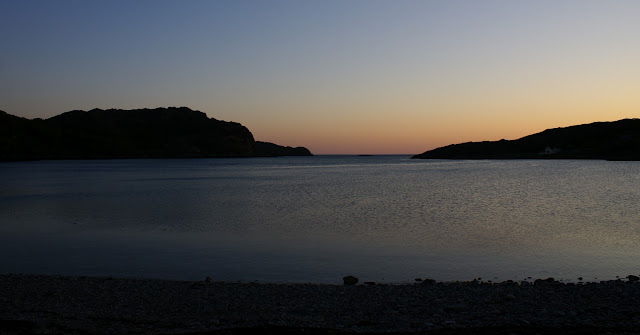 We'd booked to stay at the very comfortable Kirkaig chalets which are situated right on the shore at Inverkirkaig.  After a hot day, the cool of the evening brought a wash of colour to the view over Loch Kirkaig. 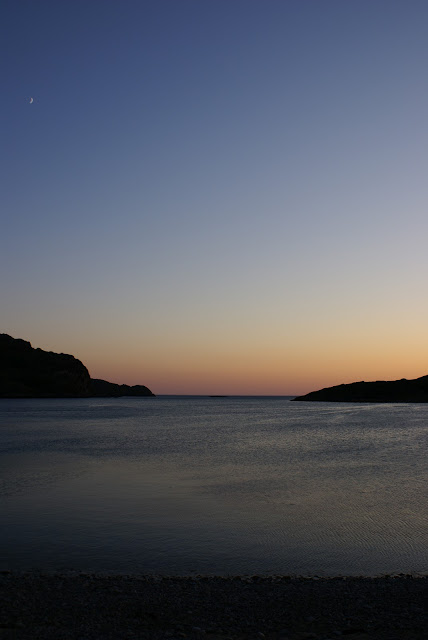 It doesn't get truly dark during the summer in the north of Scotland; well past 2300 the sunset continued to smoulder below a crescent moon.  We sat out on the balcony into the late evening, absorbing the sights and sounds of the shoreline.  Conditions for the following day looked superb.
Posted by Ian Johnston at 09:30 1 comment: