Sea kayaking expeditions can involve paddling in remote and distant locations, require detailed planning and long preparation, then lengthy journeying to reach the starting point. But what if this could be found much closer to hand? OK, so for those living in the UK there's always the north west Highlands or the Hebrides.

Perhaps something even closer might be possible? Surely you can't have adventure, wilderness and stunning wildlife encounters within 50 km of one of the UK's most populous cities....can you?

We think that you can - and what's more that an adventure needn't involve a long trip. Mike, Douglas and I set out on a small journey which would start and finish just 55km from the very centre of Glasgow. Our "planning" was essentially two texts and a phone call on a Sunday evening; we arranged to meet on the Isle of Bute on Monday morning at a time when many commuters would be arriving at work. 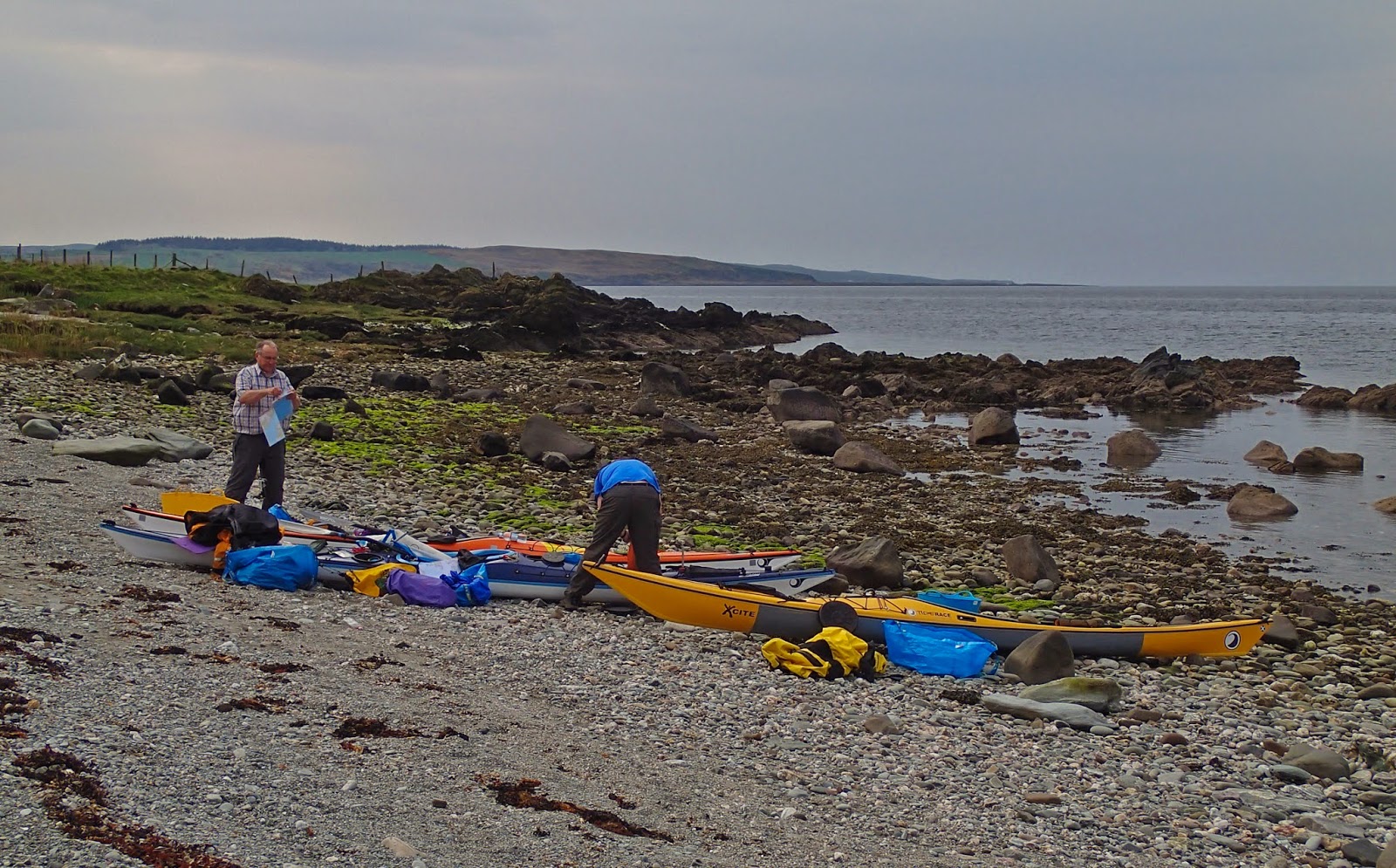 I was already on Bute visiting relatives (with a kayak and kit of course!) and after meeting the commuters off the ferry we headed over to the west of the island, a mere 10 minute drive from the ferry terminal, and got ready to launch at Kildavanan.  The morning was overcast but pleasantly warm and the forecast was for similar conditions to last through the day.

The "Kil" prefix suggests that a place is associated with one of the early Columban churchmen - it means Cill or "cell".  So here may have been the place where a monk named Davan or Davanan made his home.  Nearby is St Colmac, probably indicating another churchman, there's a stone cross near the farm of the same name.  Even older sites are nearby too, a stone circle and an ancient earthwork.  We would certainly not be the first to commute to and from this shingle beach. 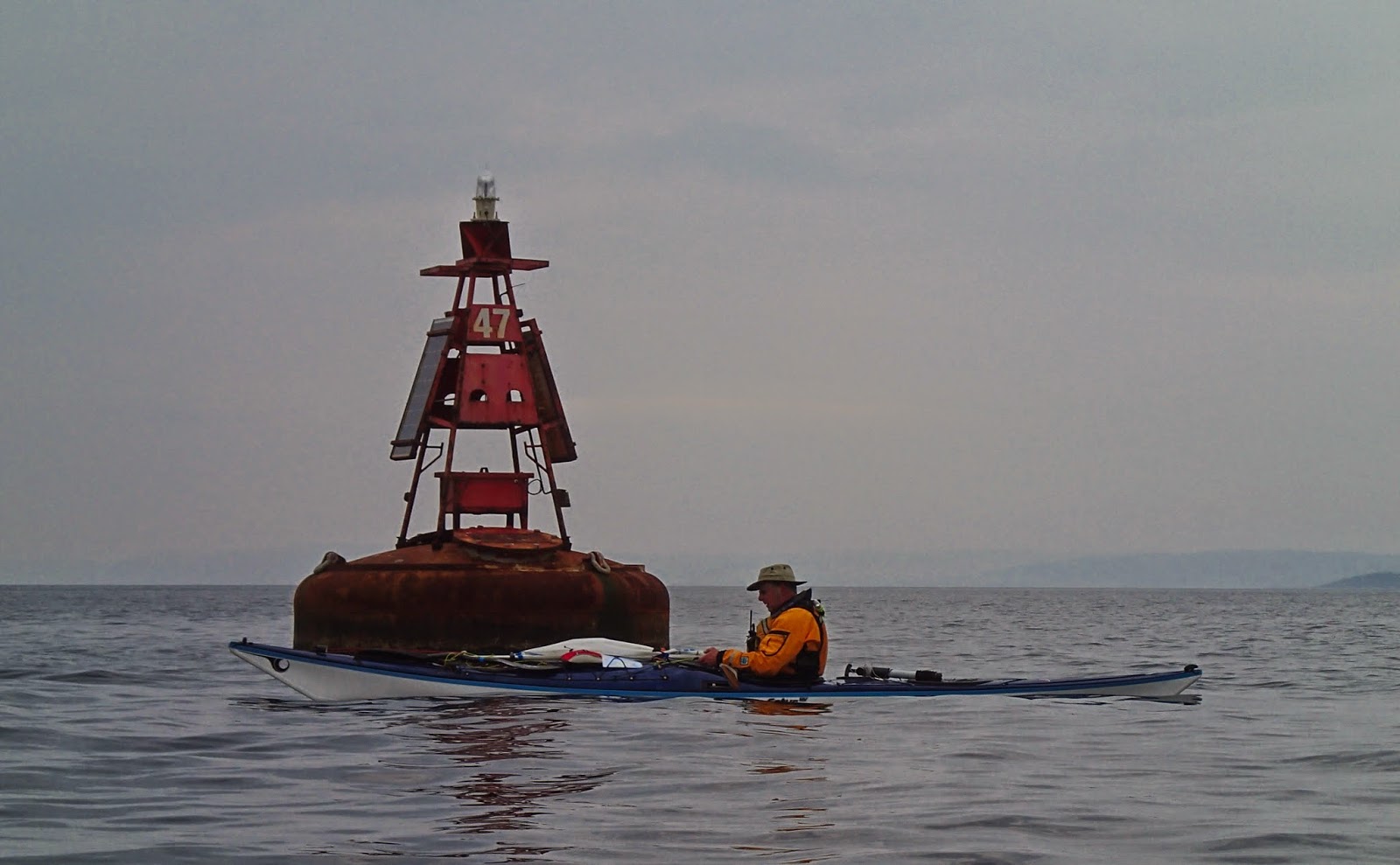 Getting on the water didn't take long and the simple rhythm of paddling was easy to re-aquire even after a long lay-off due to work.  We headed out to the Ardlamont buoy, hoping to meet "Kylie", a female dolphin which can often be seen near the buoy.  Today there was no sign of her; the sea was flat calm and we certainly would have noticed if she was around.  We thought perhaps that she was away on a commute of her own.... 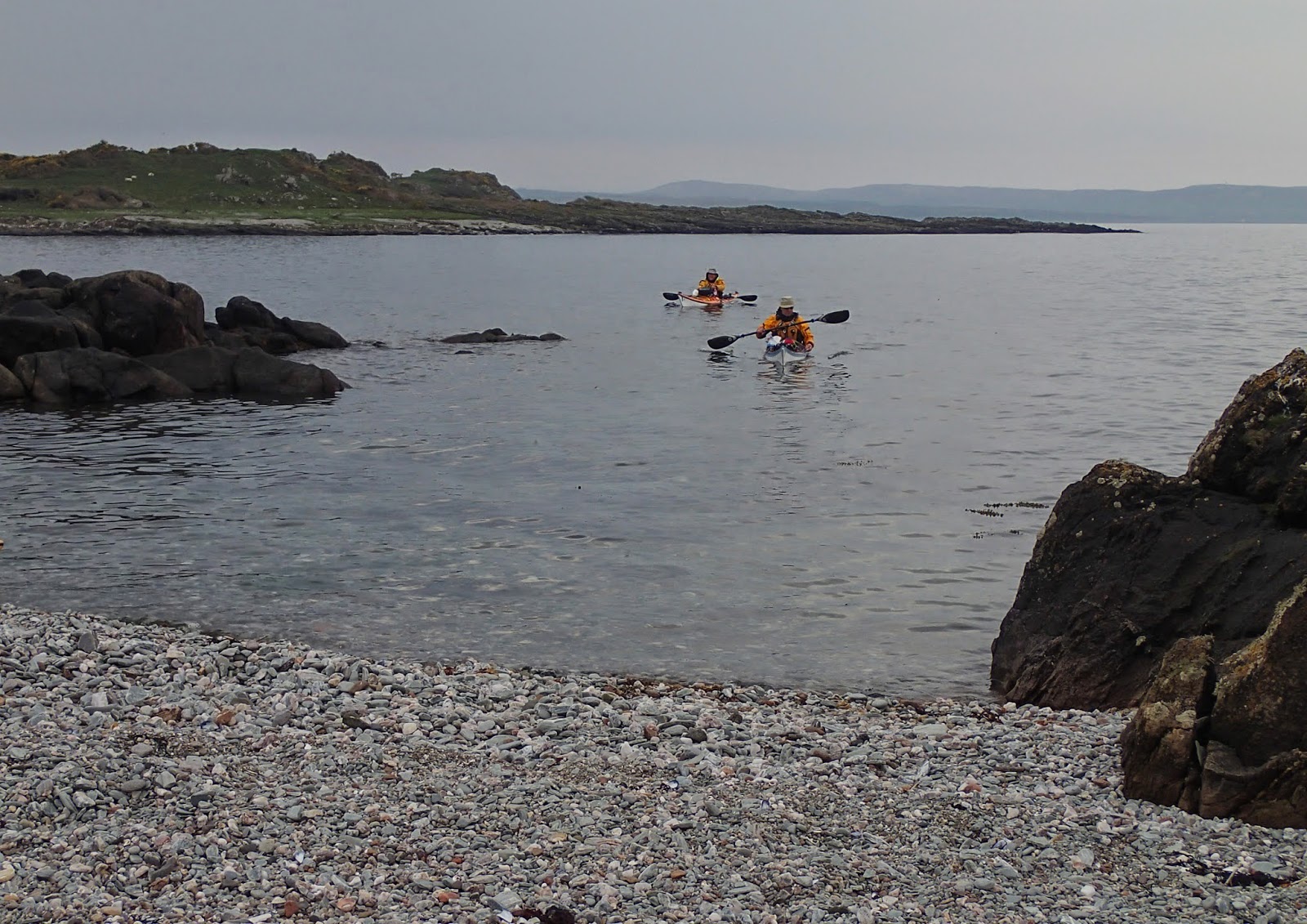 We decided that the ferry journey, drive and crossing from Bute had qualified us as overdue for second breakfast, and accordingly headed for a small shingle beach just to the west of Ardlamont Point.  There was almost no noise apart from the gentle movement of water on the shingle and the gentle mastication of three rather contented sea kayakers. 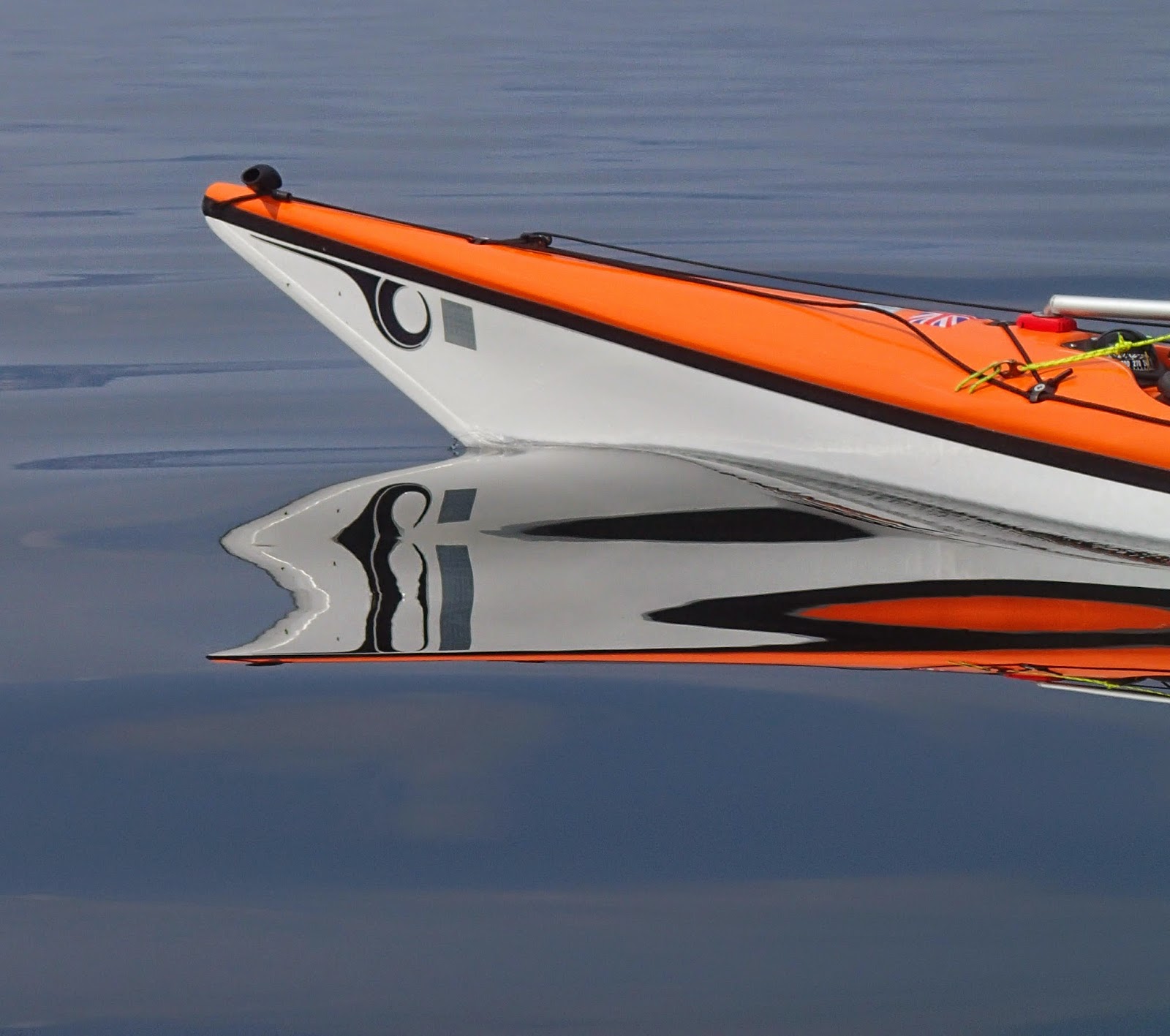 Our route would next take us across the mouth of Loch Fyne to the the shores of the Kintyre peninsula.  This stretch of water is notorious for rough seas and ferocious wind which can be funnelled out of the length of Loch Fyne making passage here a serious affair.

No such issues today though.  As we paddled colours, which up until now had been muted in the overcast conditions, bcame more vibrant and then..... 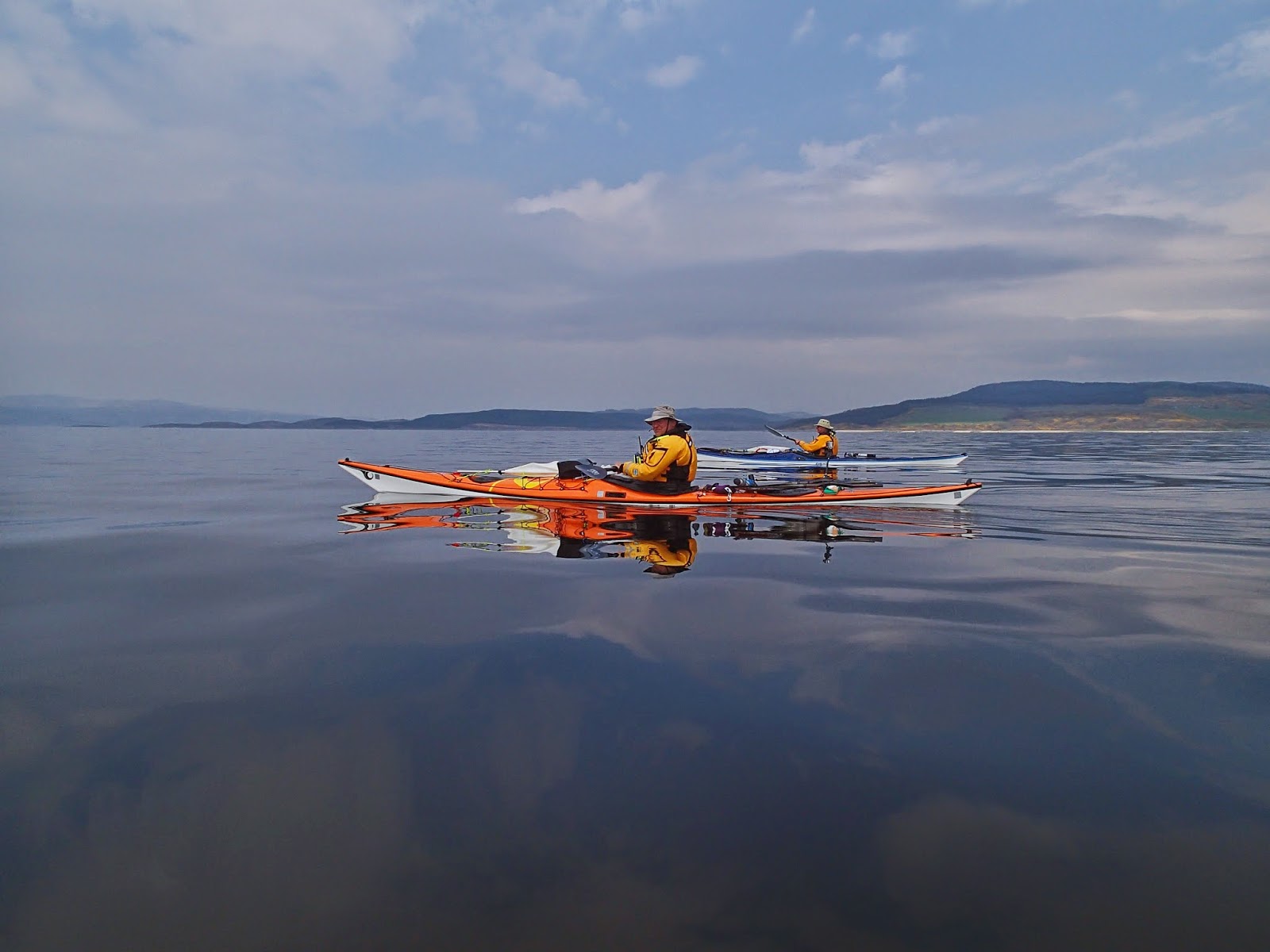 ...we were in full, glorious Spring sunshine and on glassy calm sea. It was a truly great morning to be out on the water. 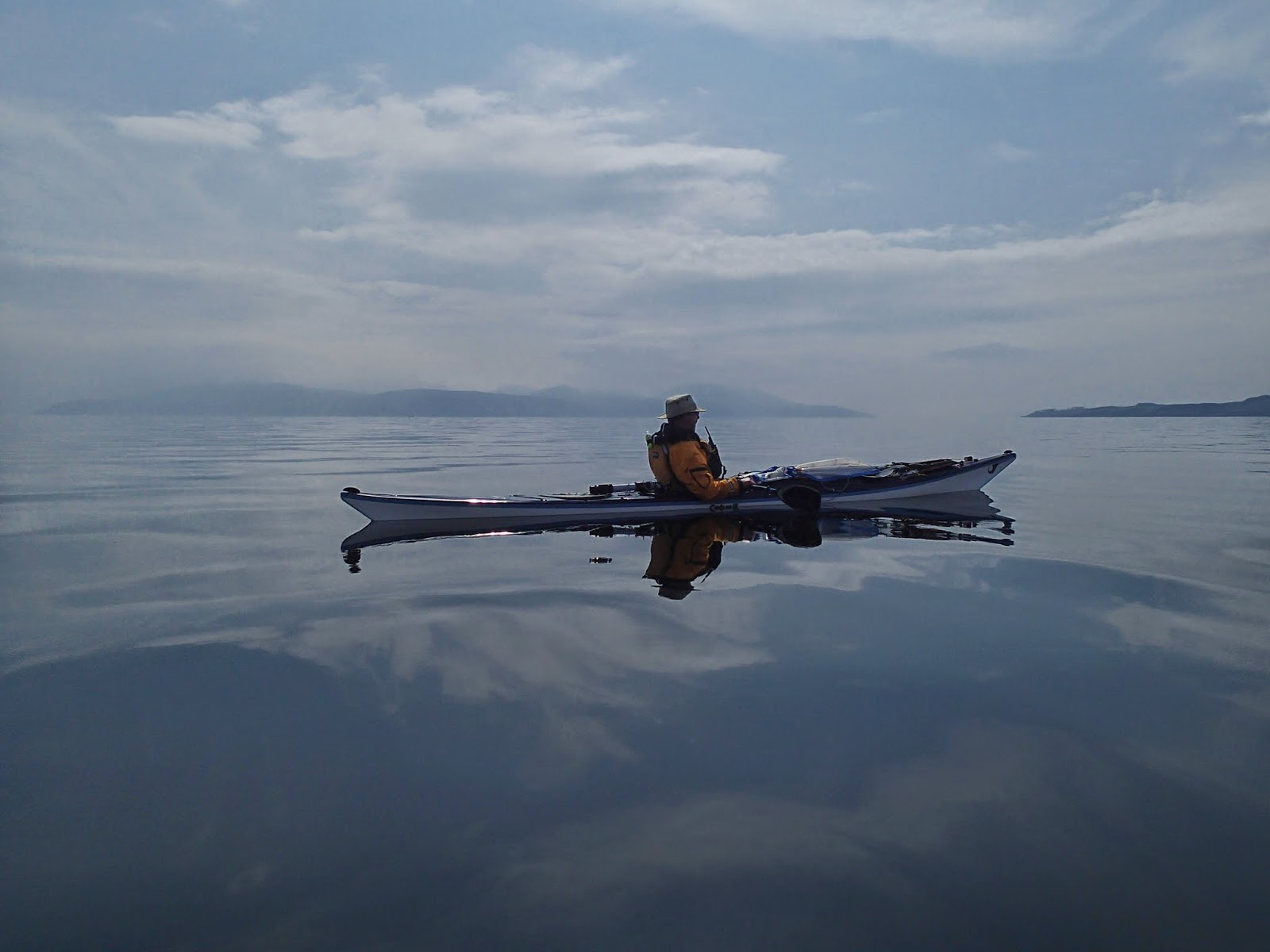 We occasionally stopped paddling to simply drift and enjoy being in this place, close in distance to a huge city but a million miles away in atmosphere.  As we drifted, a pod of Common Dolphins streaked ahead of us - moving fast and direct as they hunted for fish.  We hadn't seen Kylie, but here were some of her kin on a fast commuter route from Loch Fyne. 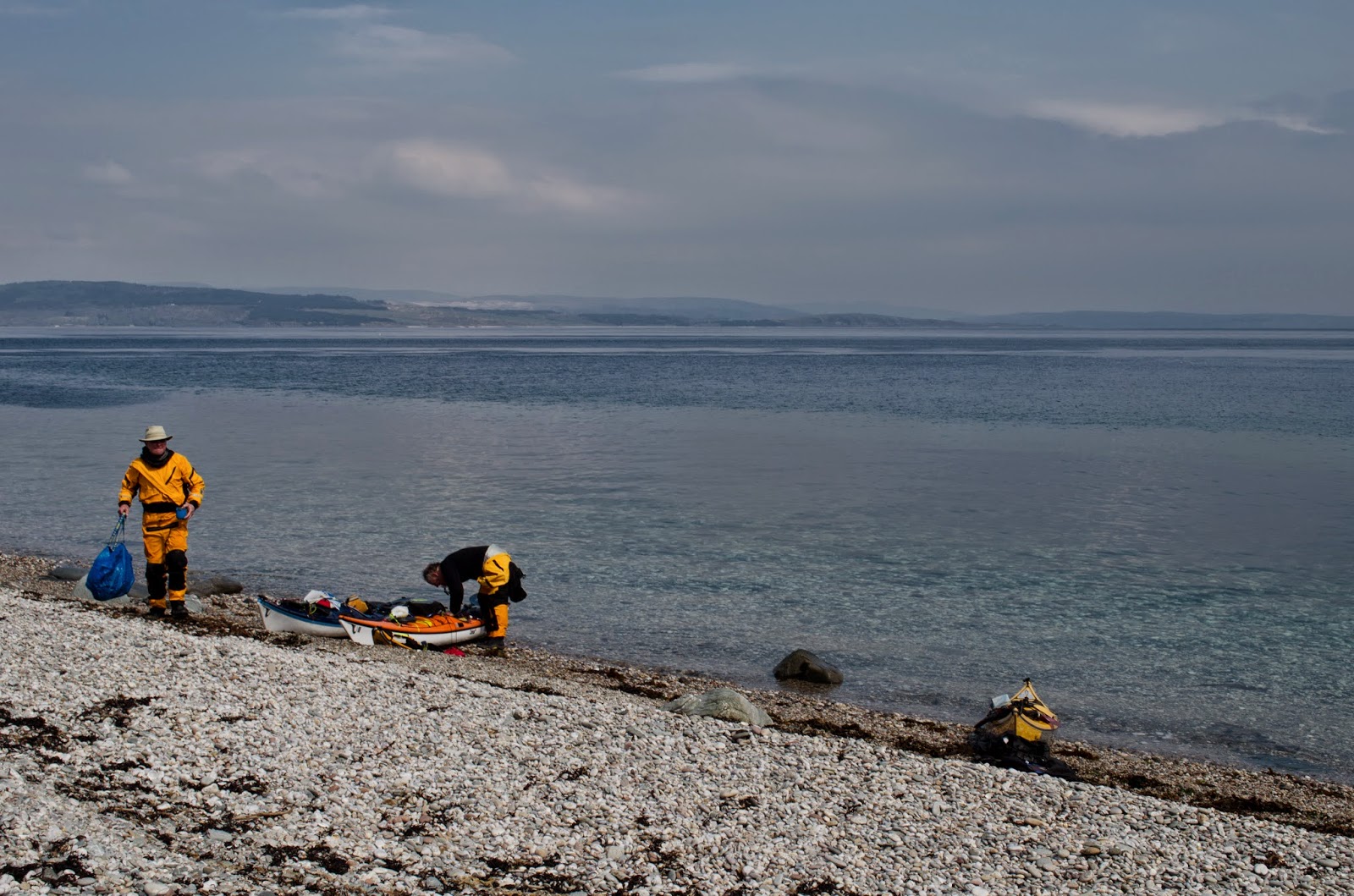 We took a rather slower paced journey to another small piece of heaven; a sparkling white beach fringed with turquoise water.  The vote was unanimous - first luncheon (*) was called!

* There's a subtle but simple distinction between second breakfasts and first luncheons on our trips
Posted by Ian Johnston at 18:56 6 comments: 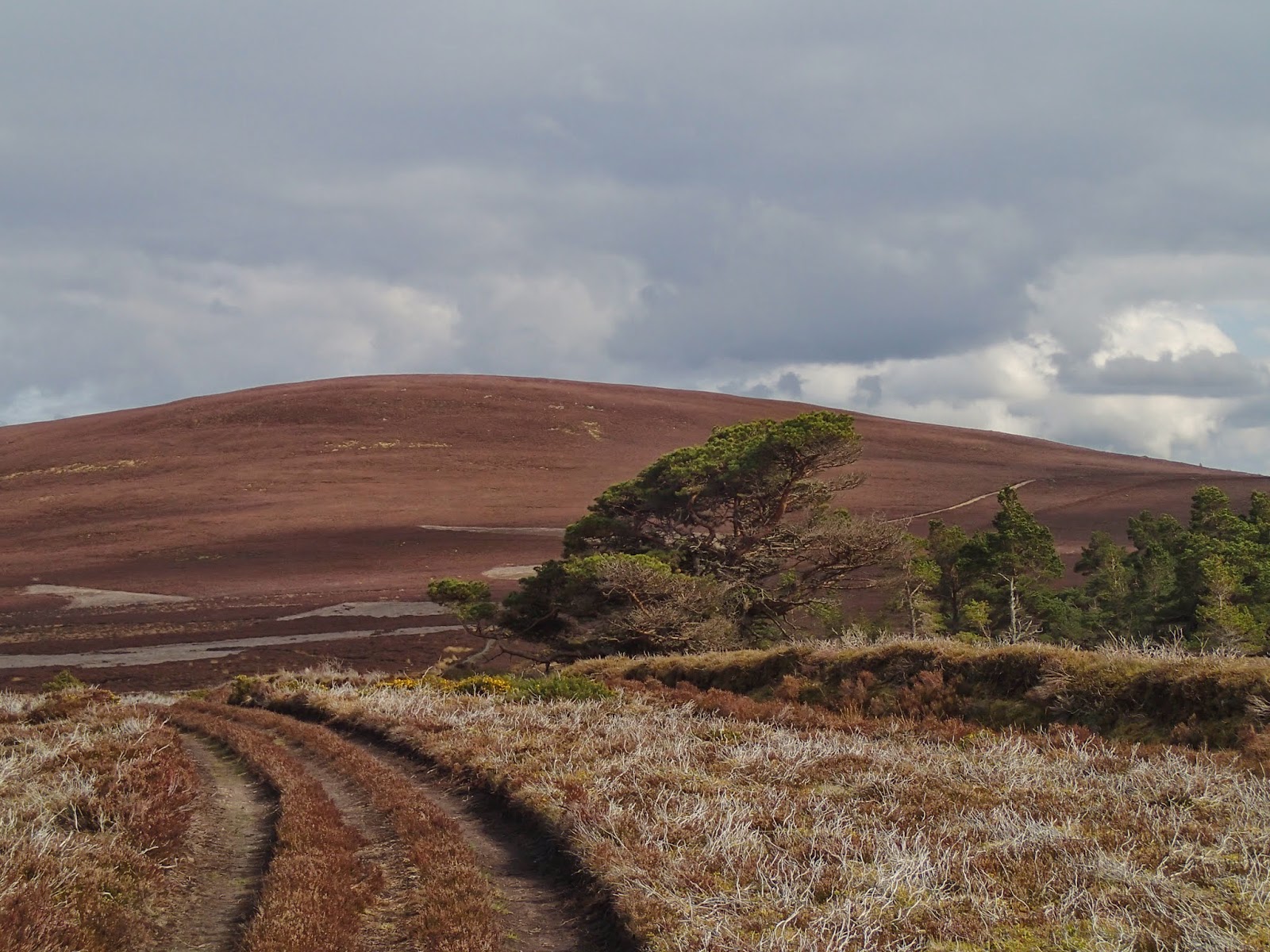 Ahead, Lord Arthur's Hill is a swelling heather dome.  Paths go to both the north and south sides of the hill so there's normally an option to stay sheltered from any adverse weather on the short climb.  The ascent from the general level of the Correen Hills ridge is just 80 metres and at a gentle angle. 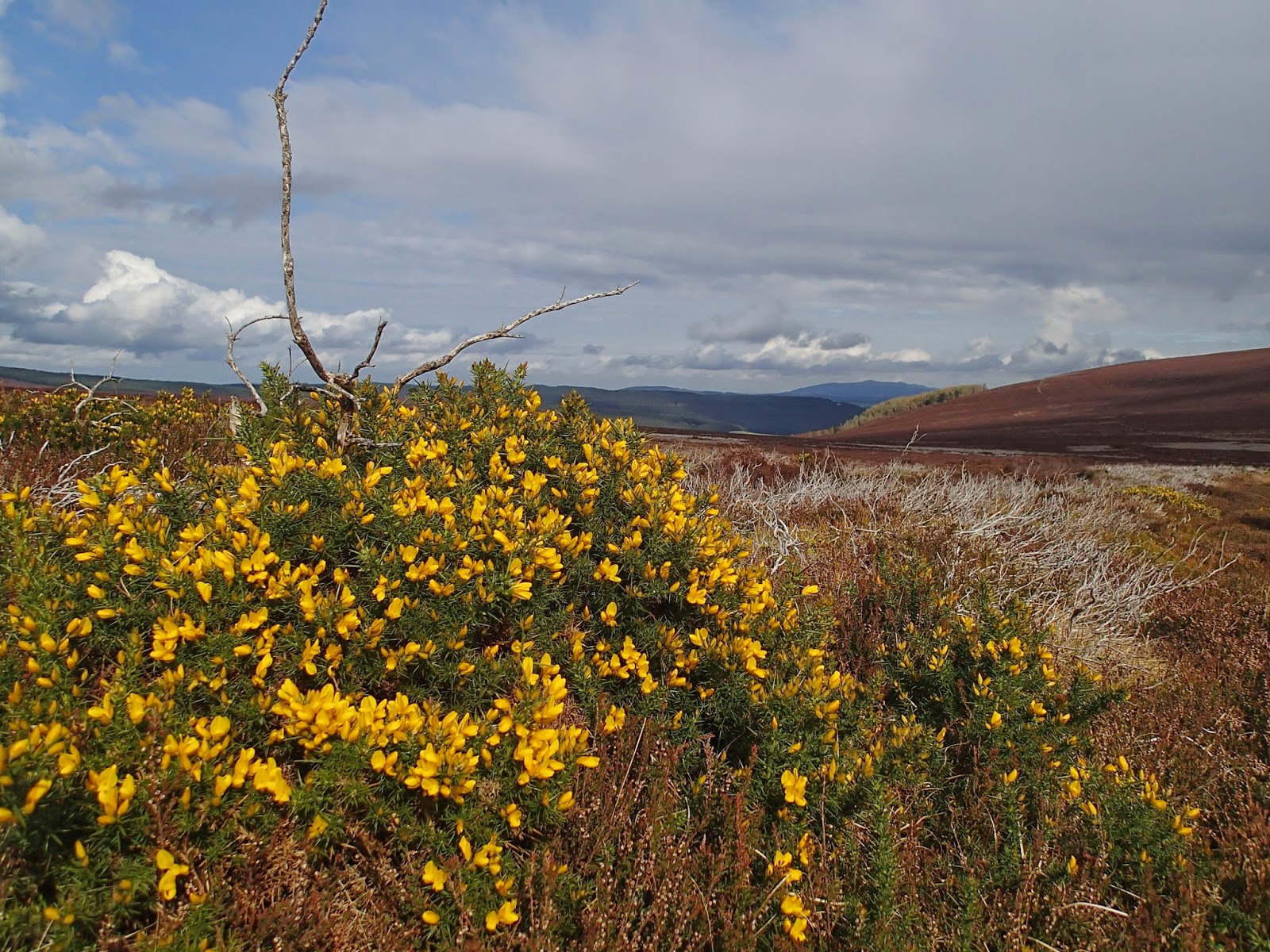 The Gorse is in full bloom even up here on the exposed hillside; the distinctive coconut smell of the flowers quite strong in the sunshine. 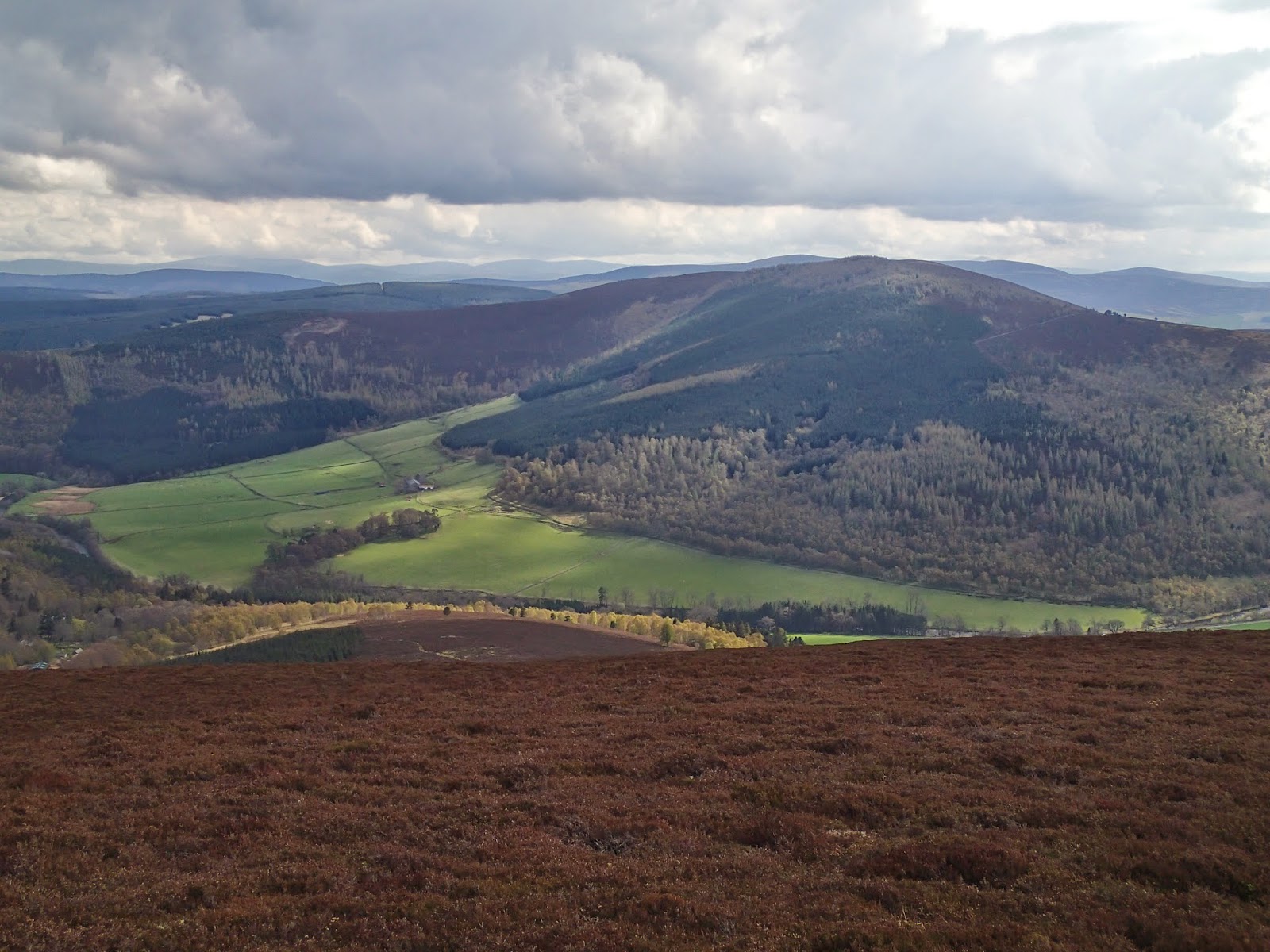 On the short climb, the view across the valley of the River Don is to Coiliochbhar Hill, the last hill I climbed prior to a long spell at work. 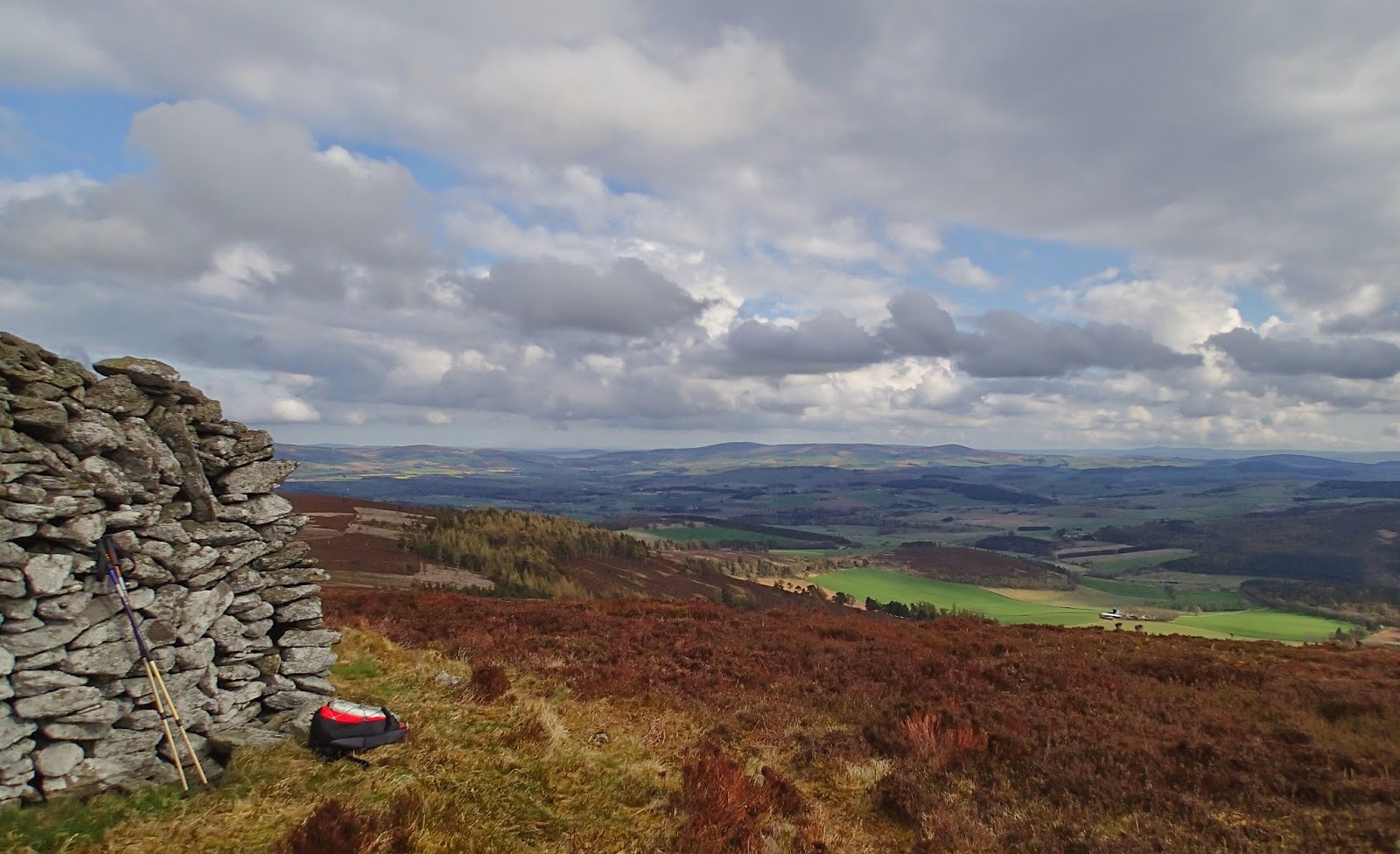 From the summit shelter on Lord Arthur's Hill the view is much wider than the modest height of 518m (1699 ft) woulod suggest.  The view to the east extends alll the way to the North Sea near Aberdeen.  Closer to hand, my route home lies down the curving heather ridge; the house just beyond the spur above the green fields. 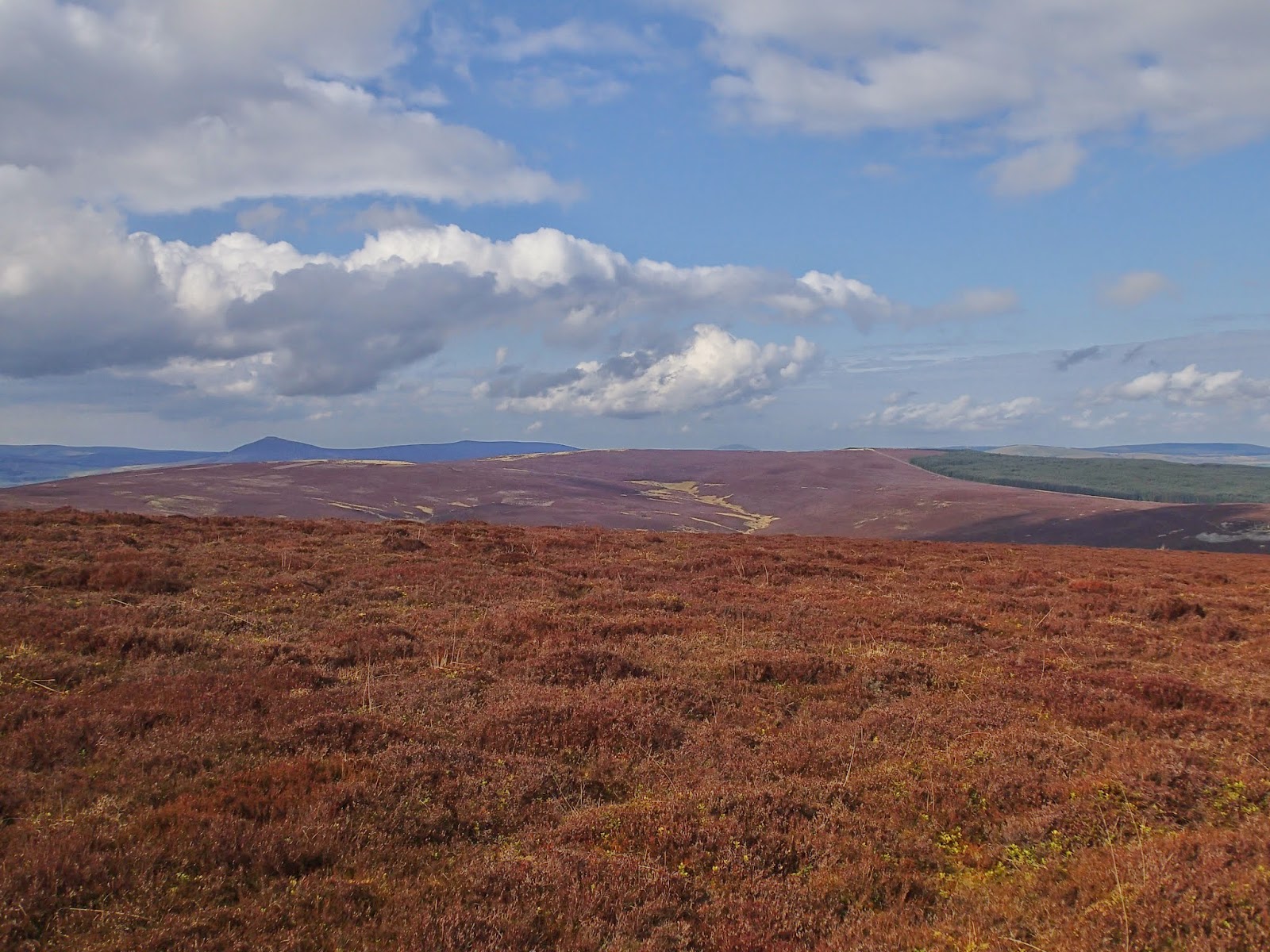 Looking back along the afternoon's walk, the full ridge can be seen.  I'd emerged from the forest just on the skyline and followed the ridge right to left.  The Correen Hills play a subtle optical trick in that distances look very long but reel off with little effort.  I consider myself very fortunate to have these super hills right on my doorstep.
Posted by Ian Johnston at 20:51 1 comment:

Marking the view on the Correen Hills 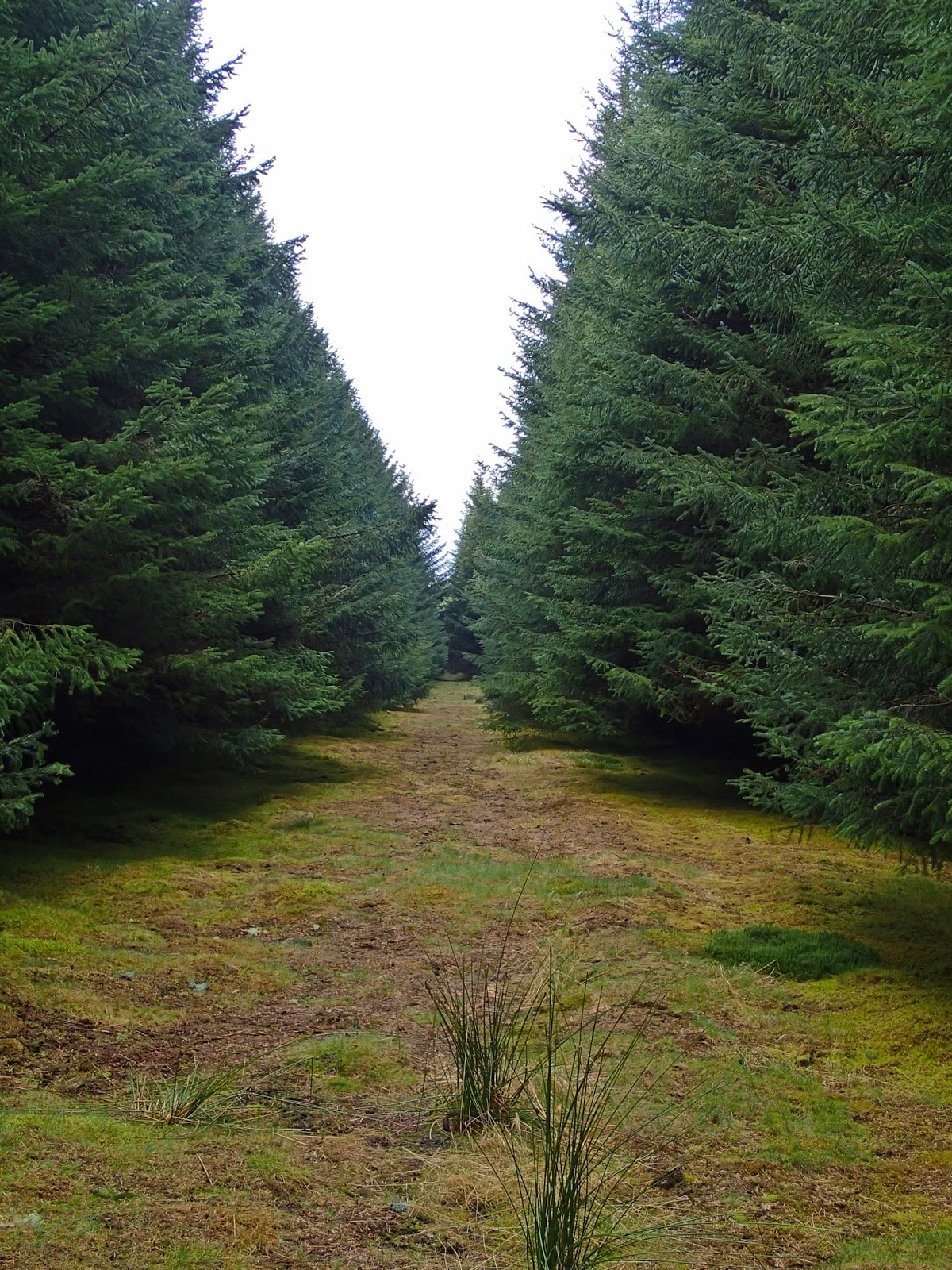 Just a short way from home, the Correen Hills give the opportunity for a variety of hillwaking routes with spacious views.  This particular route doesn't start with much of a view except for ahead and astern though!

The morning was damp and misty with light rain, but it cleared to give quite pleasant conditions by lunchtime.  The beauty of having this on the doorstep is that a hillwalking trip can be planned in a couple of minutes with little more effort than puttting a few bits in a rucsac and pulling on boots.  I cheated a bit and got dropped off at the top of the Suie Hill road, meaning that the biggest ascent of the day was already done. A broad forest track heading west from the summit of the road is followed until it reaches a high point in the forest; then a much narrower and overgrown track leads gently uphill to emerge from the tree cover near to the summit of Badingair Hill. 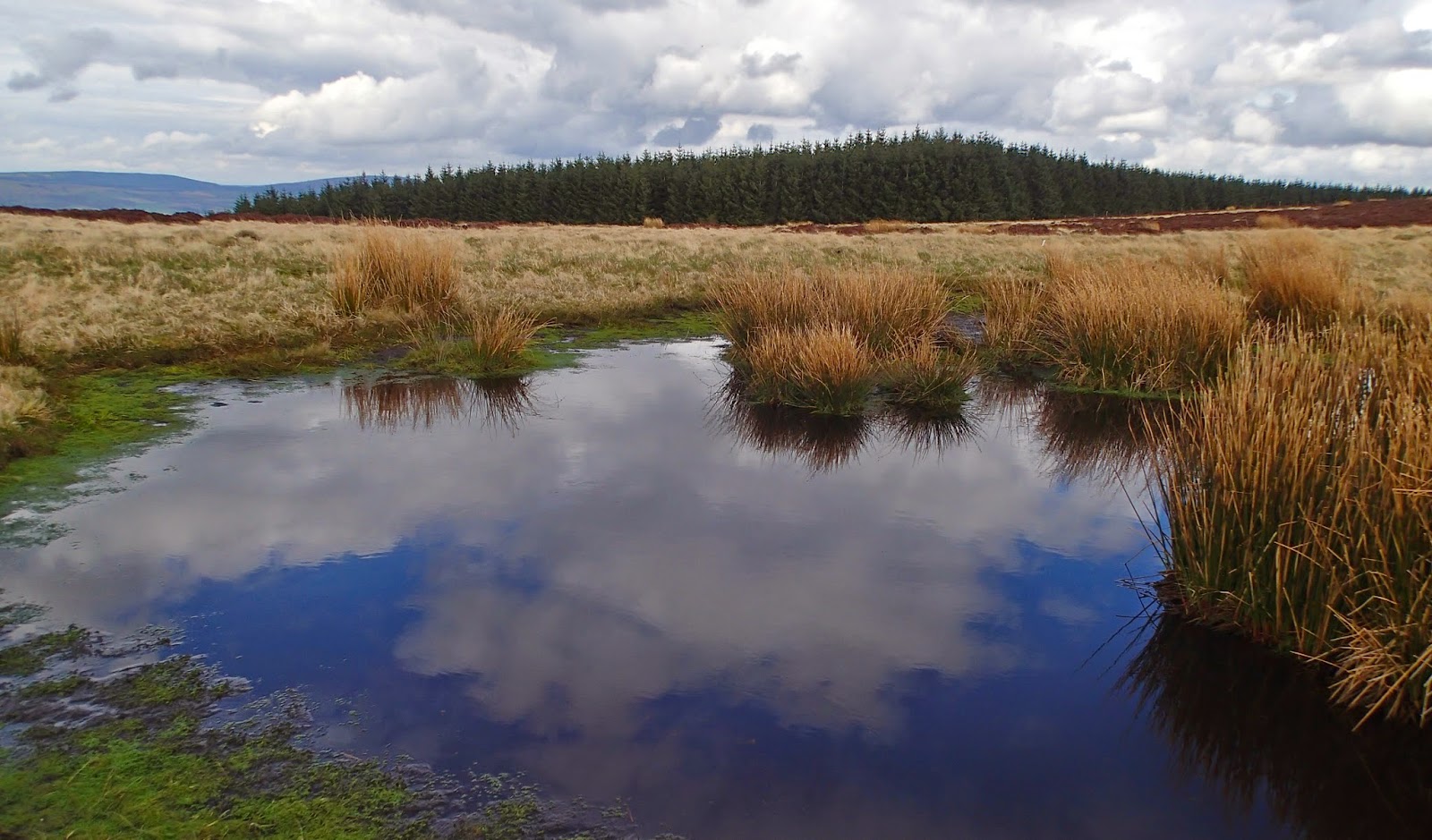 A tiny pool nearby reflected the sky, but beneath the surface it was anything but still - tens of thousands of tiny Tadpoles newly emerged from spawn were crowding the edge of the water where it was slightly warmer. 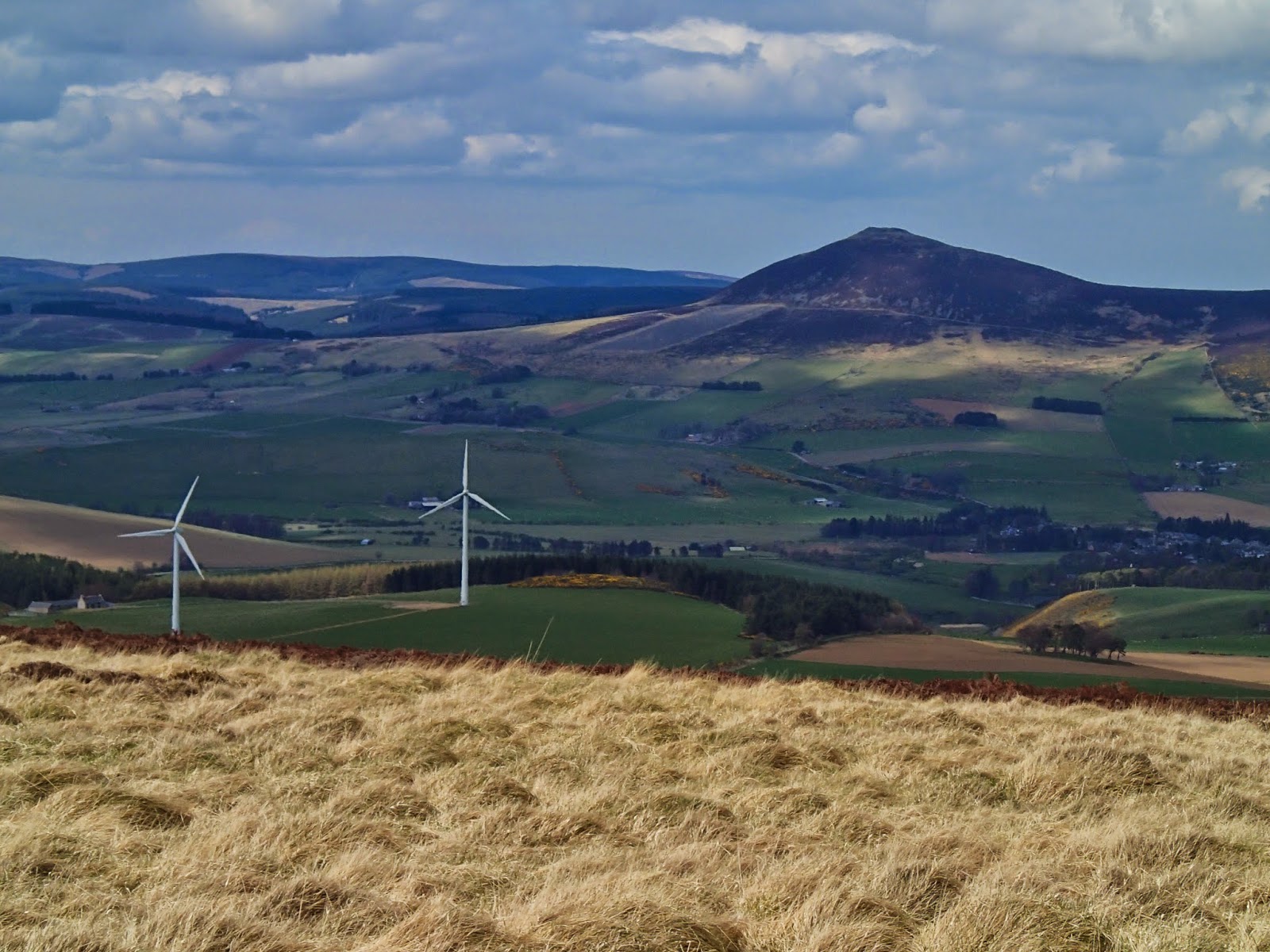 The view to the north is largely dominated by the distinctive flattened cone of Tap o' Noth, the summit of which is a large hillfort.  This view has been altered substantially by the erection of three 81 metre high wind turbines at Cairnmore above the village of Rhynie. Planning permission for a further five turbines has recently been refused.  Many of the views from these hills are now altered by wind turbines - I was able to see four wind factories from this one viewpoint. 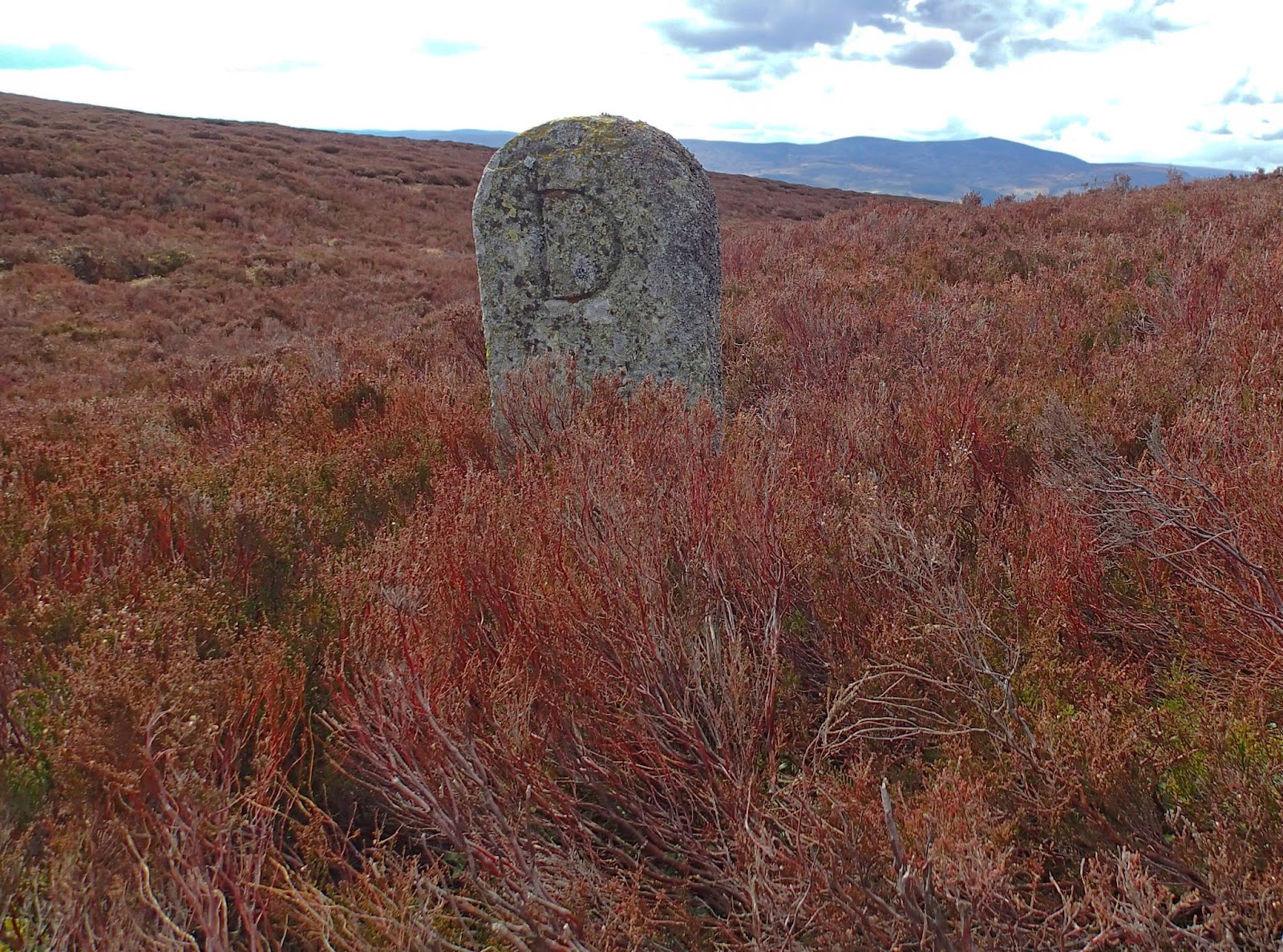 The walk southwest is on good ground for doing effortless distance, turf and cropped heather with a bit of a track.  Brux Hill and Edinbanchory Hill rise barely 20 metres above the general level of the broad ridge so the views stay wide and spacious.  Near to the point where the ridge arcs sharply to the southeast is a reminder that stamping a mark on the landscape is nothing new.  A Victorian boundary marker, one of several along the ridge, is incised with a large letter D, probably denoting the Deskie estate boundary. 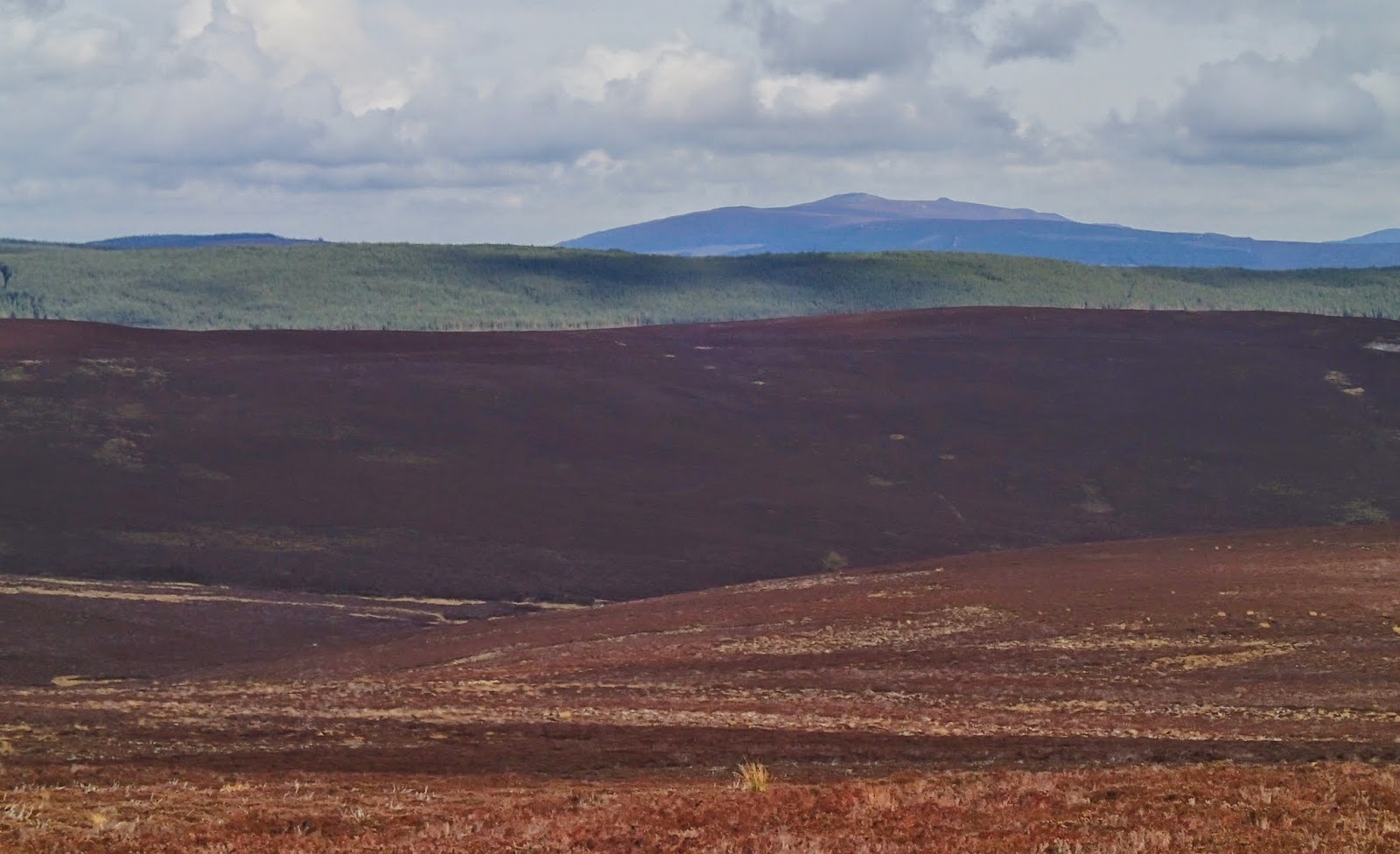 Looking across to the east the view was marked on an altogether grander scale, the gentle spurs radiating from the Correen Hills ridge forming a series of contasting colours, the bright burnt orange of the sunlit heather backed by the purple of the ridge in cloud shadow followed by the rich green of the forest near Suie Hill.  Beyond is Bennachie, which is ever-present in this part of Aberdeenshire.

A herd of Red Deer were moving across the ground ahead of me, just visible in the heat haze shimmering off the ground in the spring sunshine.  I continued southeast towards the highest point of the day; though the ascent wouldn't be at all hard going.....
Posted by Ian Johnston at 10:54 2 comments:

After the best part of five months spent away from home, it's good to be back.  Waking up to sunny and warm mornings has been a bonus; often there is lying snow at this point in April.  Spring is everywhere - the first sounds heard on waking are birdsong; the wild bubbling call of Curlews and the metallic "kleep" of Oystercatchers which come inland to breed on higher moors and farmland add to the more usual garden birdsong.

Spring flowers are much in evidence too... 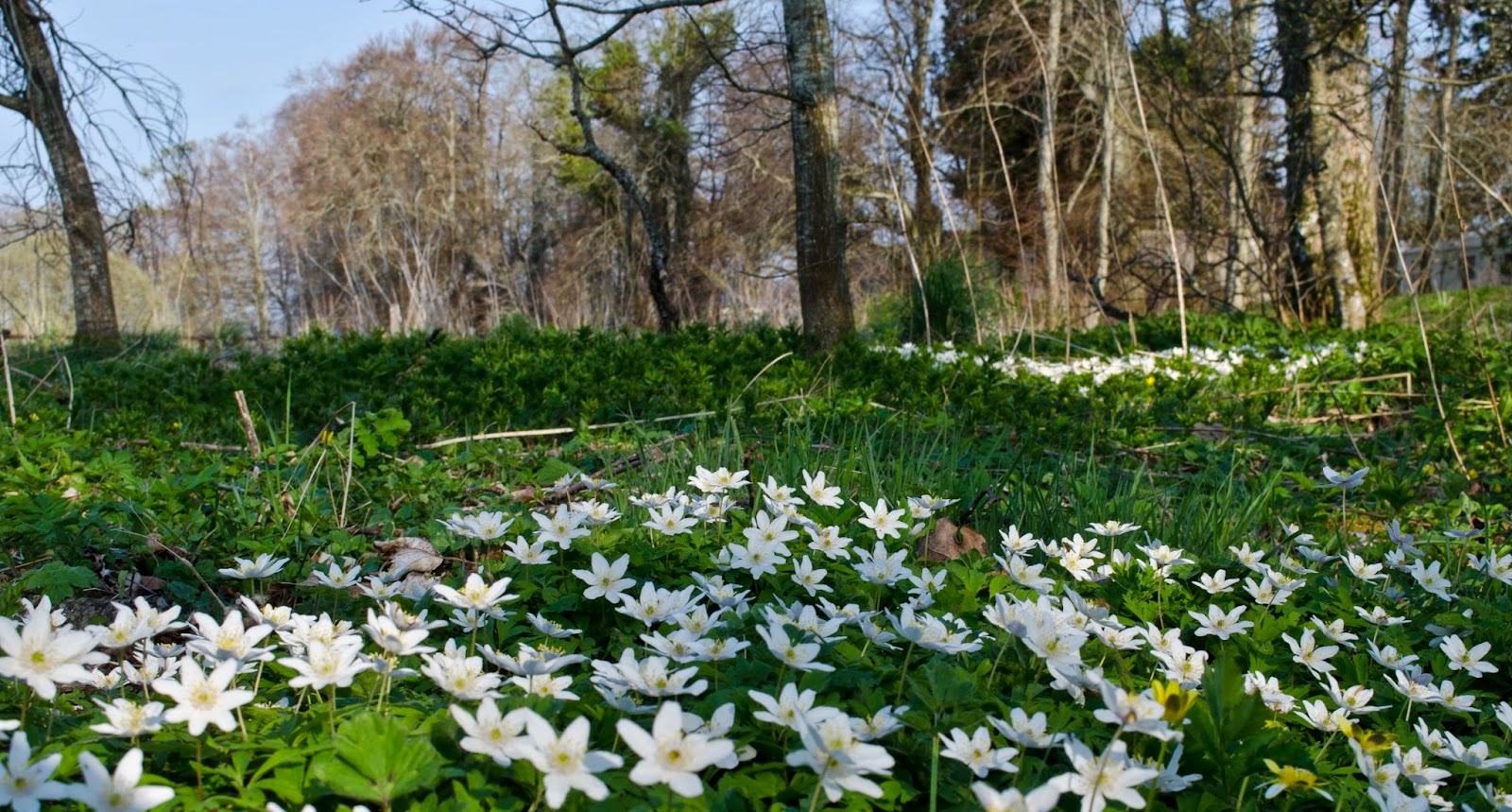 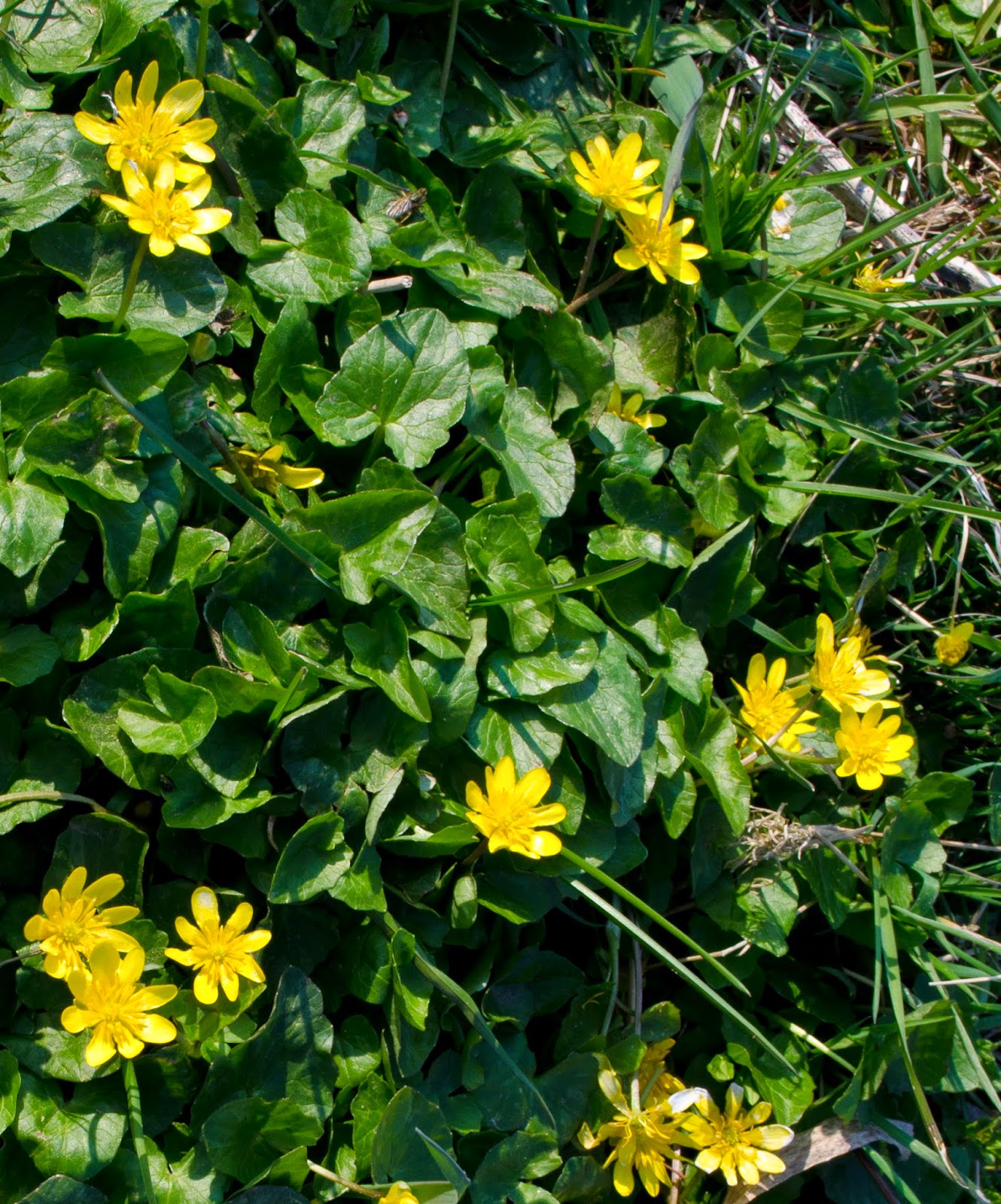 By the riverbank and in the damper areas, Lesser Celandine (Ranunculus ficaria) makes a cheerful sight, the bright yellow flowers set against the glossy green of the leaves. 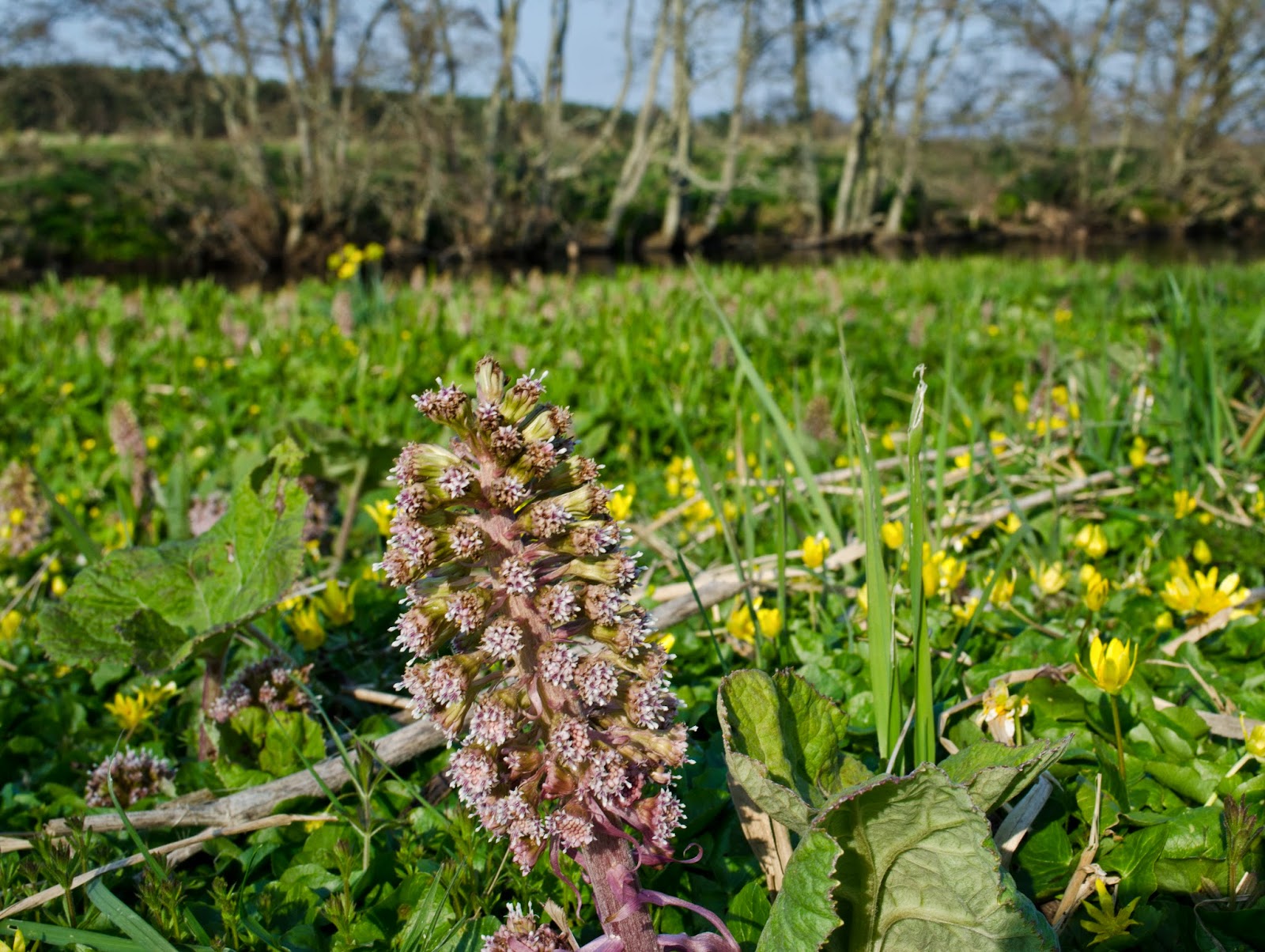 Amongst the banks of Celandines is a patch of Butterbur (Petasites hybridus), a plant found mostly near rivers and unusual in that the cone-shaped inflorescences develop well before the leaves, in fact it often seems to flower when everything else is dormant. 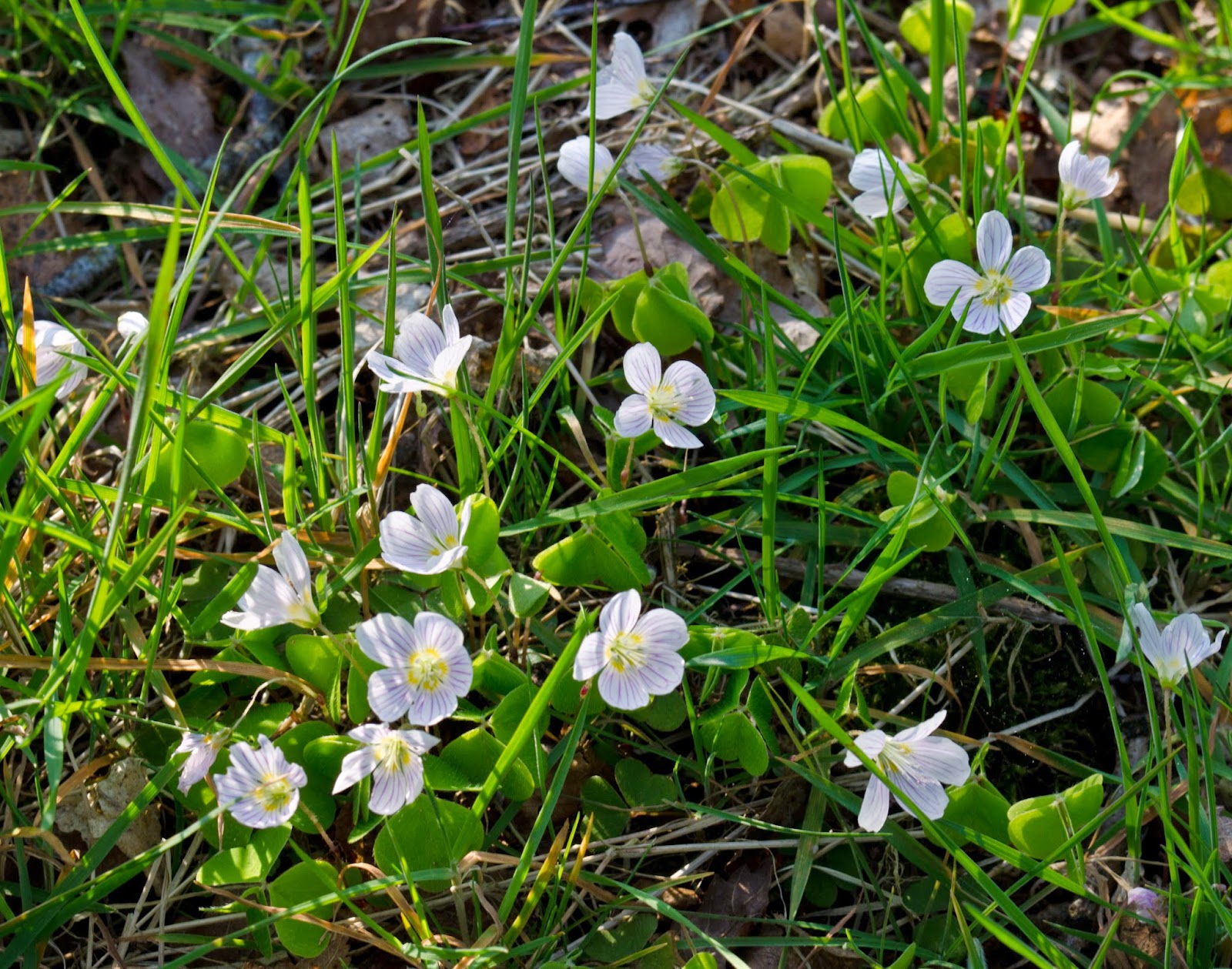 Back into the woods and the first of the Wood Sorrel (Oxalis acetosella) is flowering in sunny open areas.  The leaves of this plant can be chewed to freshen the mouth, they have a pleasant lemon flavour.  Like the Wood Anenomes it's an early Spring flowering plant, taking advantage of the light before the spreading canopy of the trees puts the woodland floor into shade.

Wood Sorrel flowers are things of delicate beauty, and it has one of the loveliest and most descriptive of Gaelic names - Feada-Coille; "Candle of the Wood". 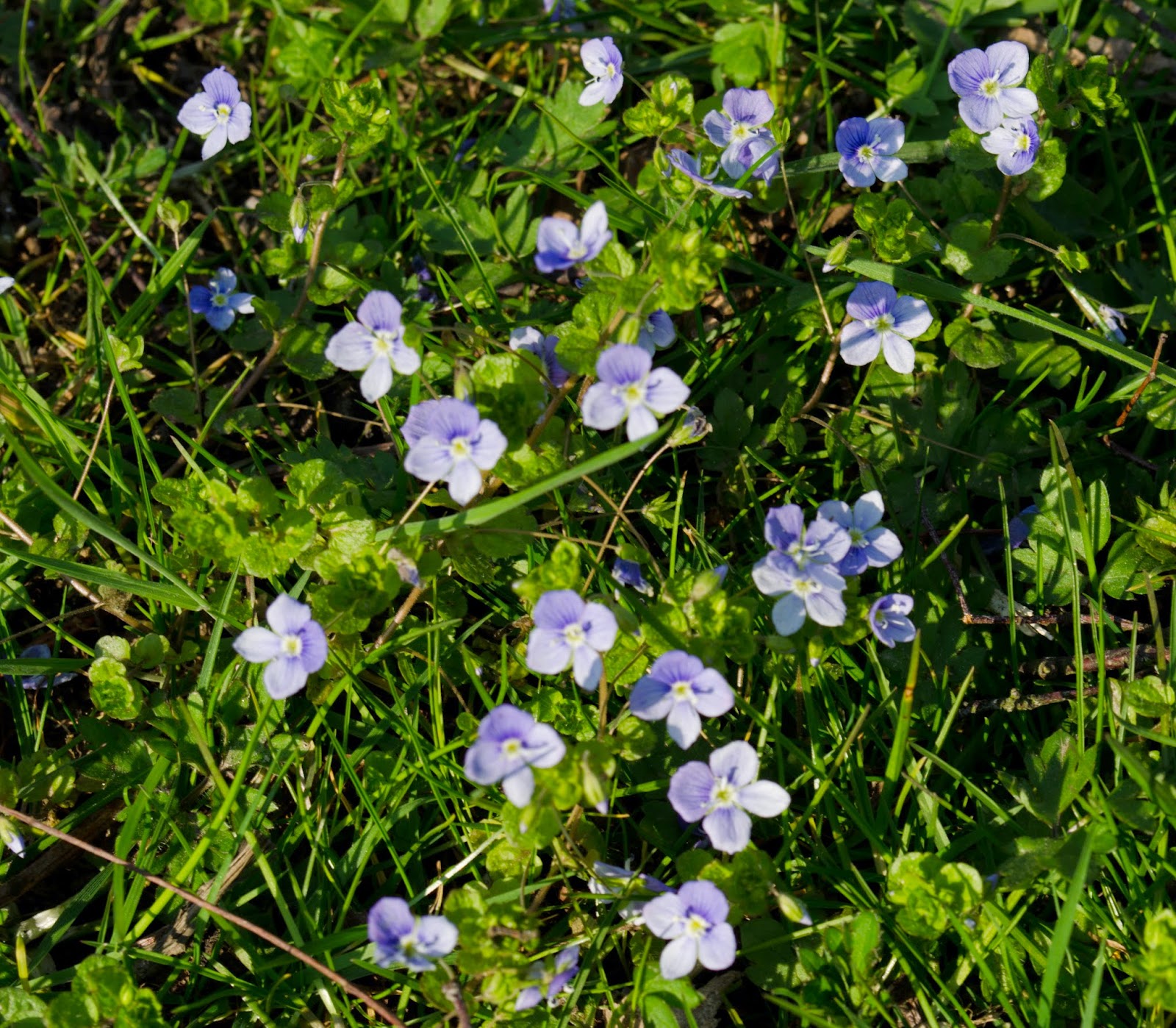 On sunlit banks, Speedwells are beginning to brighten the grass....... 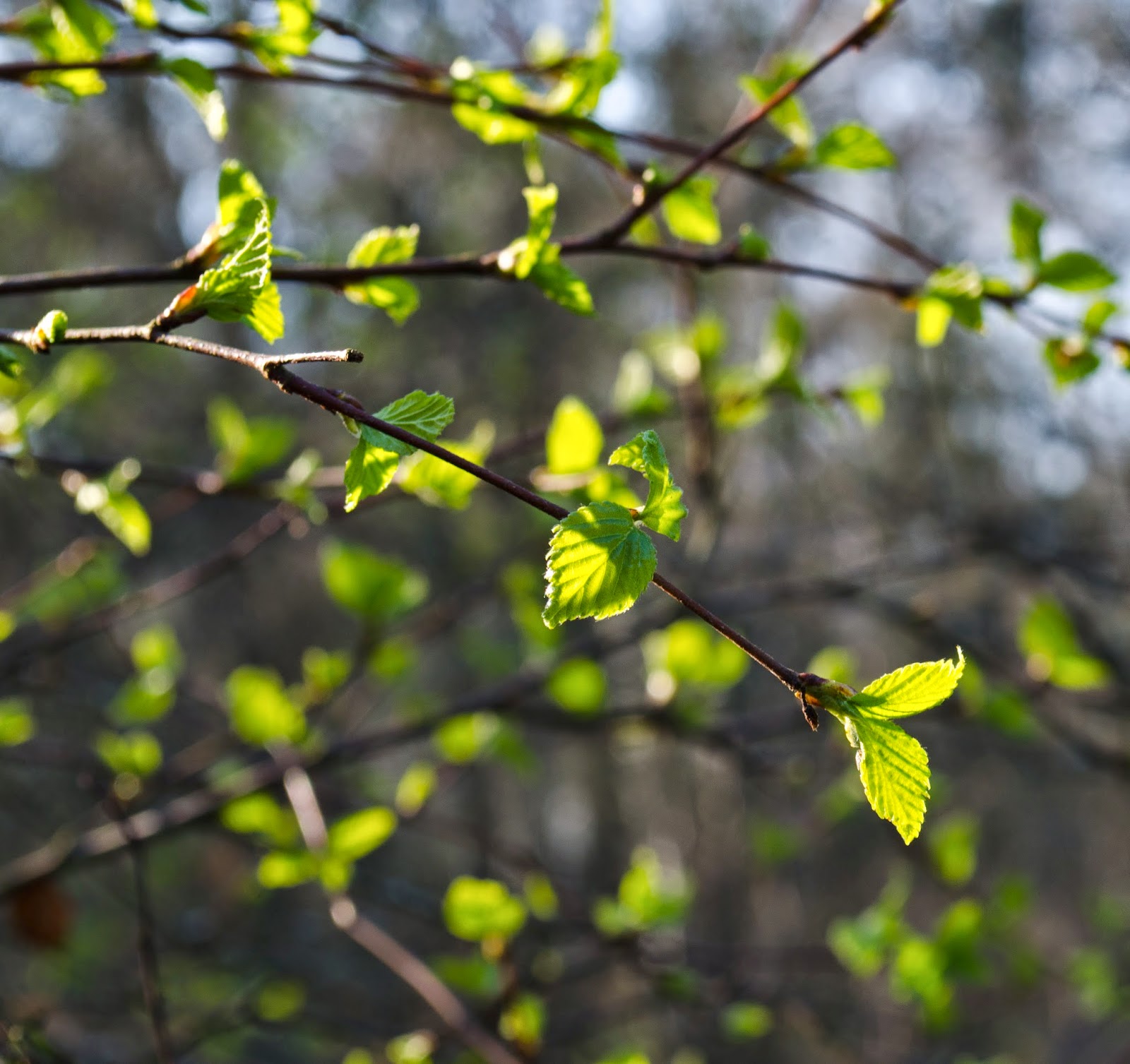 ......while above them, Birches in full sunlight are just starting to open brilliant jewel-green leaves less than a centimetre long from the buds which have blushed the wood with purple throughout the winter. 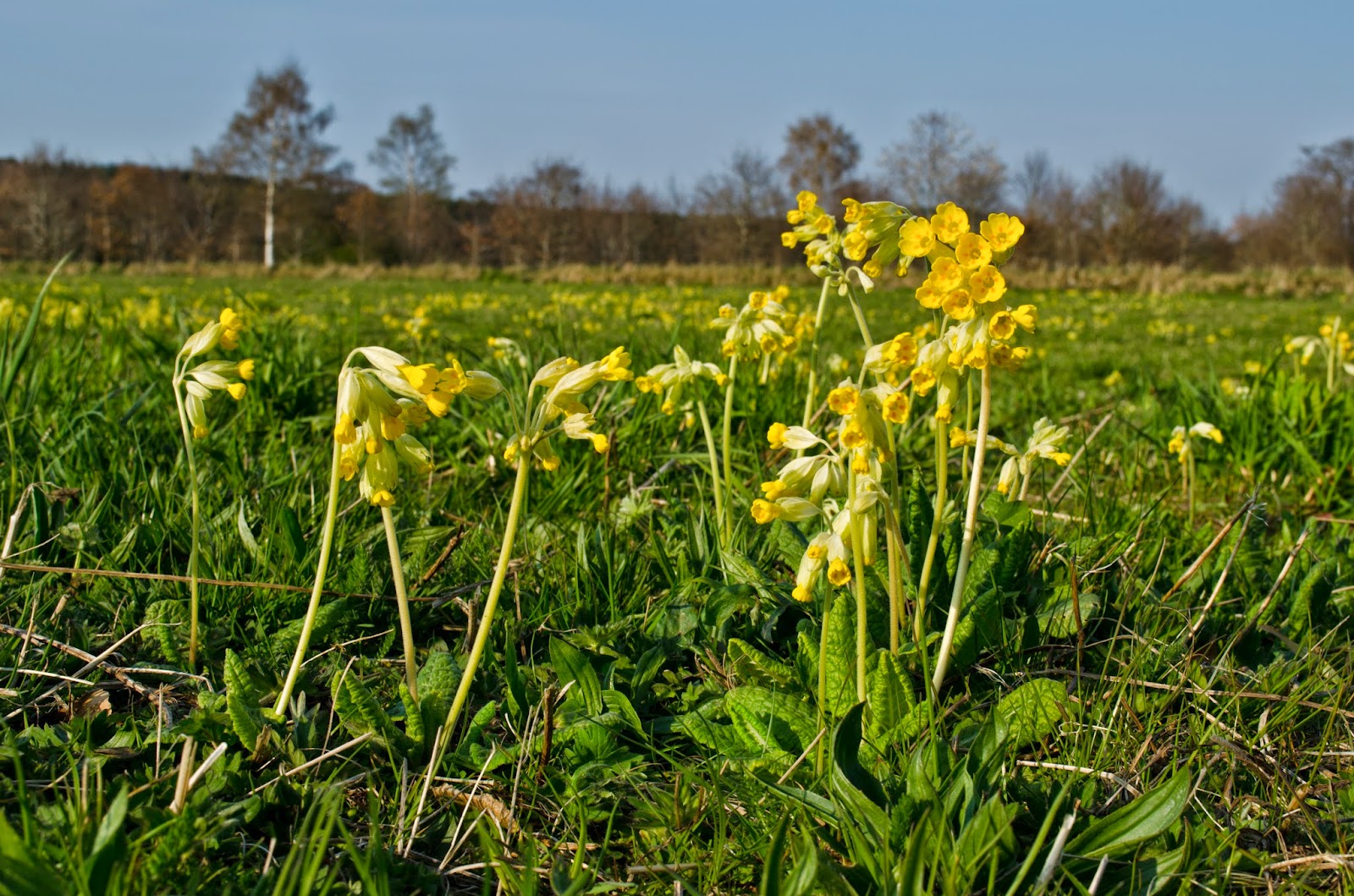 Returning along the riverside, a meadow area is covered with Cowslips (Primula veris), more common here than in many parts of Scotland where its close relative the Primrose is abundant. 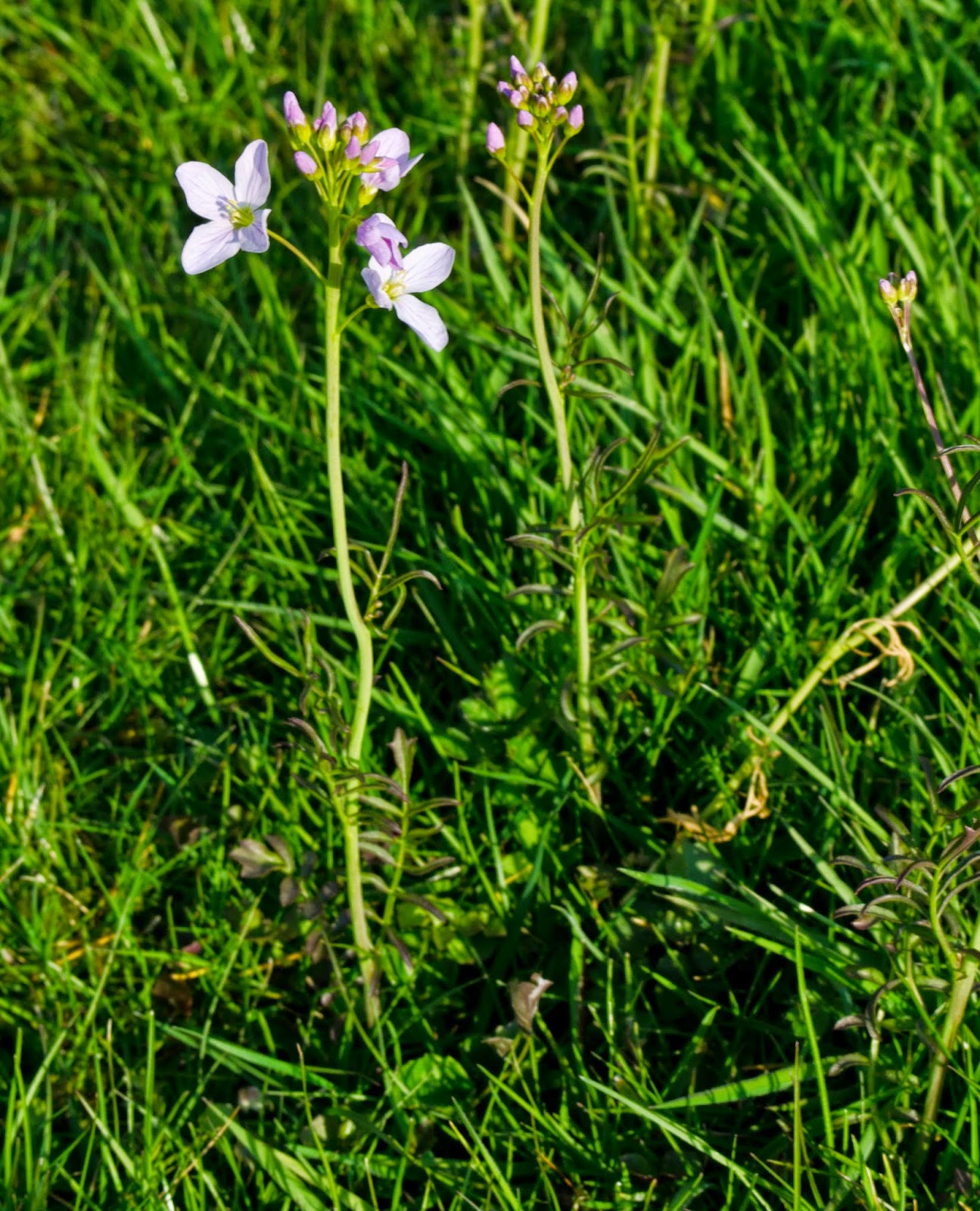 Even our garden has small Spring flowers - Cuckooflower (Cardemine pratensis) - also known as Lady's Smock, has sprung up from newly cut grass.  Most years the snow shovel is a more useful garden tool than the lawnmower in mid April! 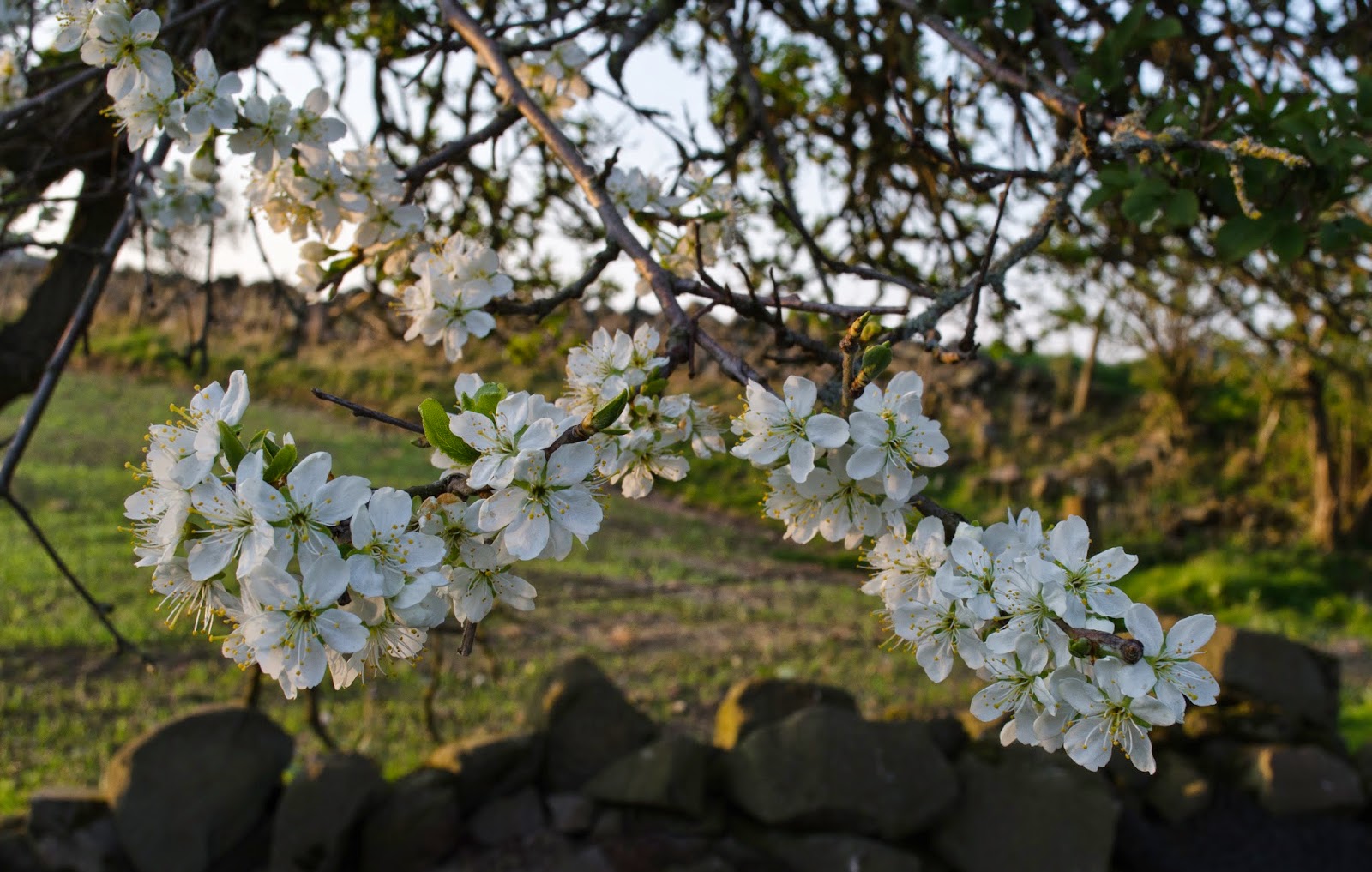 ...and if the frosts stay away for a while, the abundant blossom on our Plum tree bodes well for late summer fruit.

There will no doubt be some harder weather to come before Spring moves into early Summer, but the new growth and life everywhere is so uplifting.