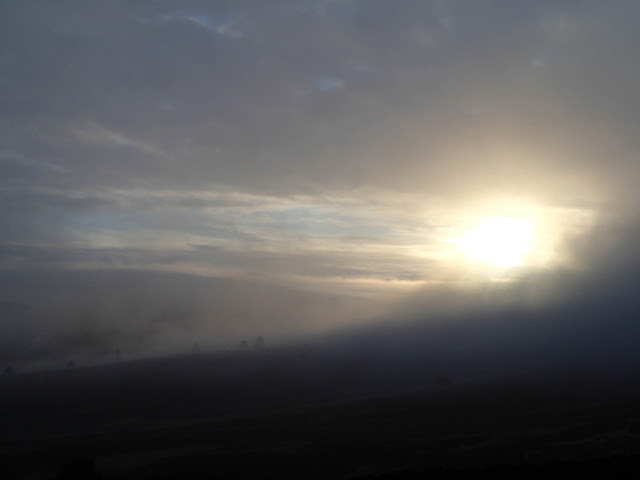 Descending from Coiliochbhar Hill towards the ruined farmstead at Tibberchindy I walked down through the mist which had clung to the eastern slopes of the hills all day.  As the evening was approaching it began to break up, giving soft focus effects as the pale winter sun began to emerge. 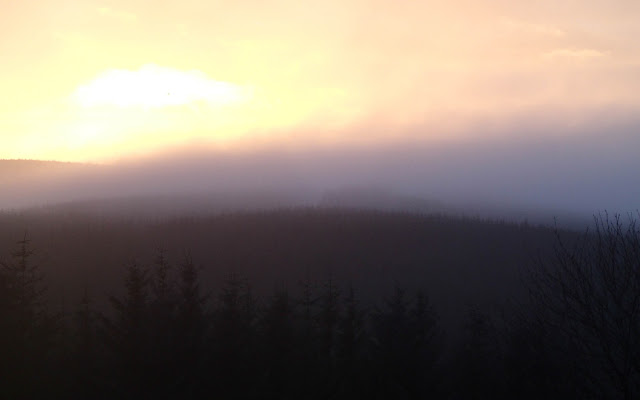 A growing blaze of colour began to spread across the horizon as the sun dropped.  The effect was reminiscent of  J.M.W Turner's paintings of sunsets 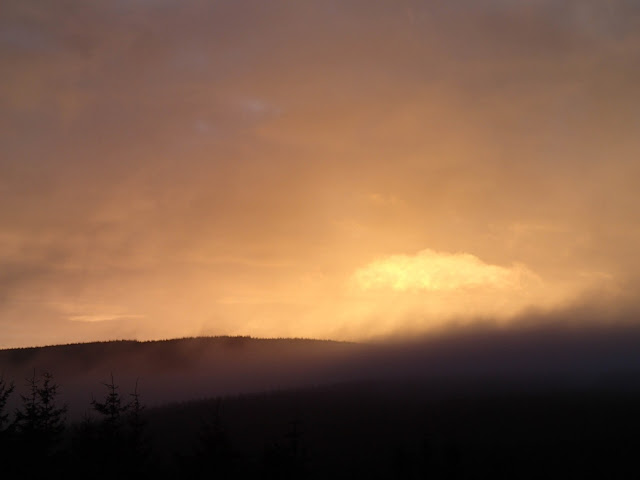 The colour developed to a gorgeous golden glow which washed the ambient light, changing subtly by the minute.  I knew that hanging around would mean walking along the roads towards home in the dark, but this was not to be missed.

Soaking up the atmosphere on Coiliochbhar Hill


The summit area of Coiliochbhar Hill is approached from the track via a wood of Larch trees; this wood is very prominent in the view of the hill from the A944 road along the River Don from where Coiliochbhar appears to block the valley. 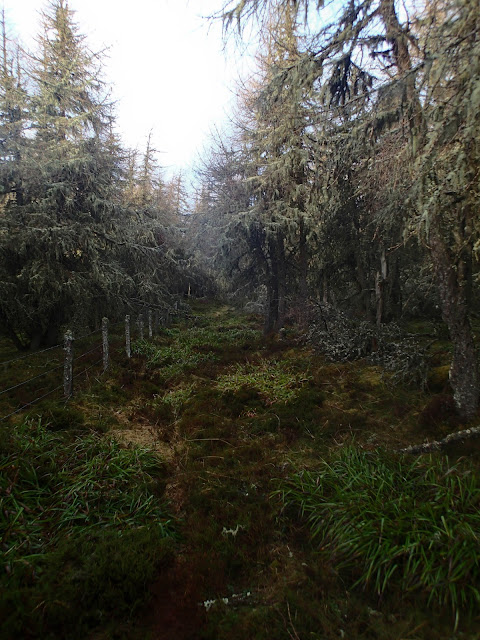 Even in winter this wood is a really atmospheric place.  Carpeted with mosses and woodrushes, it has the feel of a cloud-forest, an almost other-worldly pace. 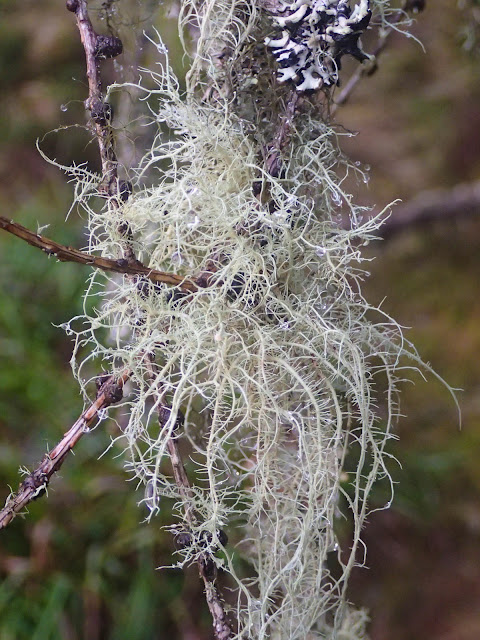 The branches of the Larches are draped with enormous quantities of lichens of various types, all dripping wet in the misty atmosphere. 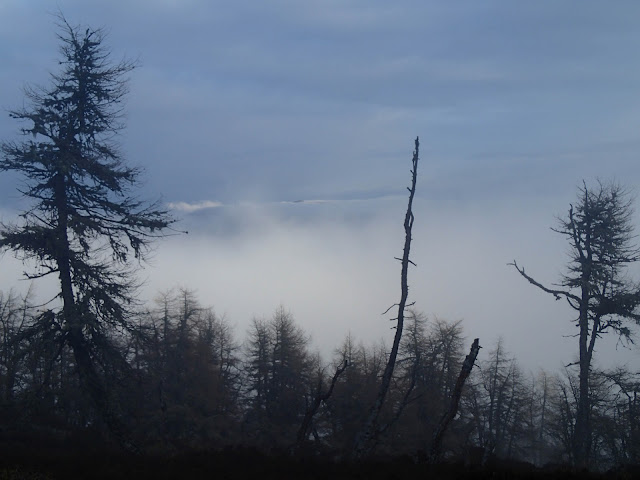 Emerging from the wood, the view to the east consisted of shades of grey and black, stark tree silhouettes and softer shapes of cloudbanks and hills beyond.  The wider view reminded me in some ways of a Japanese scene. 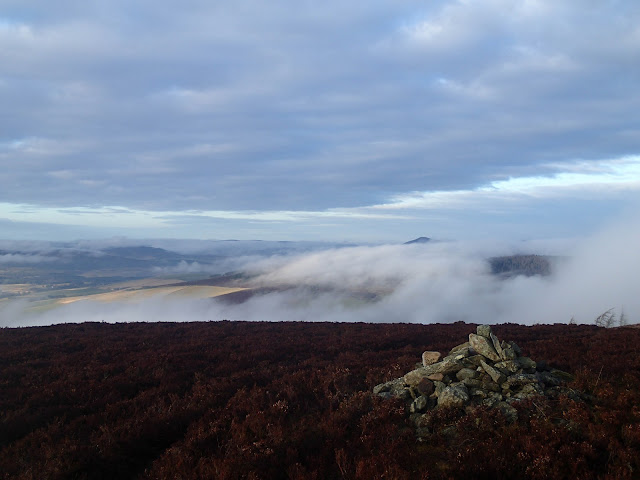 The top of Coiliochbhar Hill is marked by a small cairn adjacent to a fence line.  For such a small hill (533 metres/1749 feet) there is a fairly wide view over the farmlands of Donside and across to the Ladder Hills.  the summit peeking above the mist is Bennachie - that most distinctive of north-east hills. 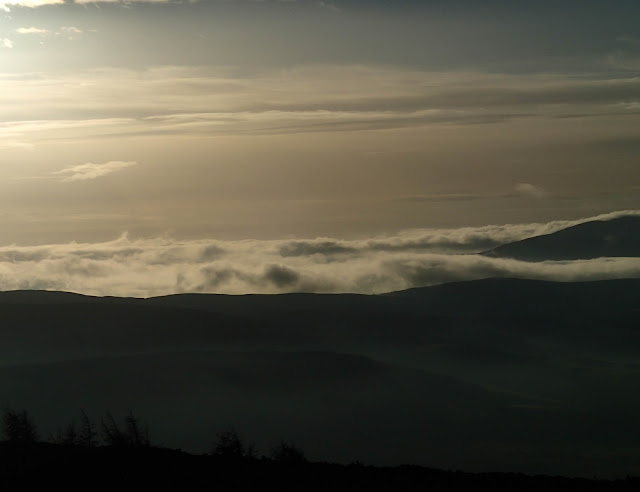 To the west, the sun was burnishing the mist to a  pewter hue; beyond the lowering cloud-bank gave warning to the approach of the snow which has since blanketed much of the north of Scotland. 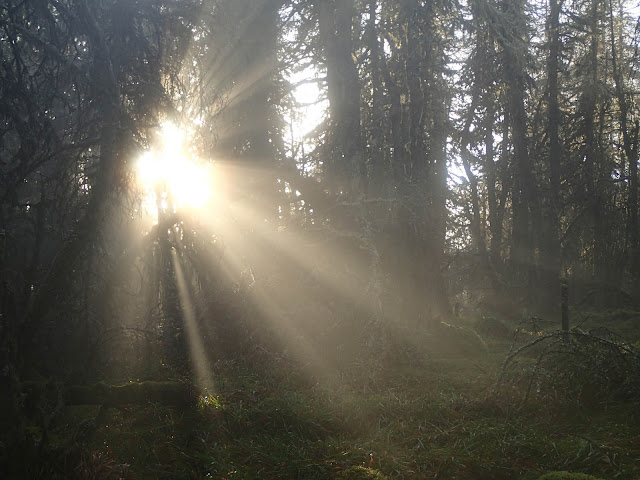 Returning to the Larch wood, I came across probably the highlight of the day as the sun burst through the mist and threw gorgeous shafts of light through the trees.  The effect was spellbinding and I took many, many images in an attempt to capture the atmosphere of this special place.  Just moving one's head a few feet to left or right gave completely contrasting effects - just magical. 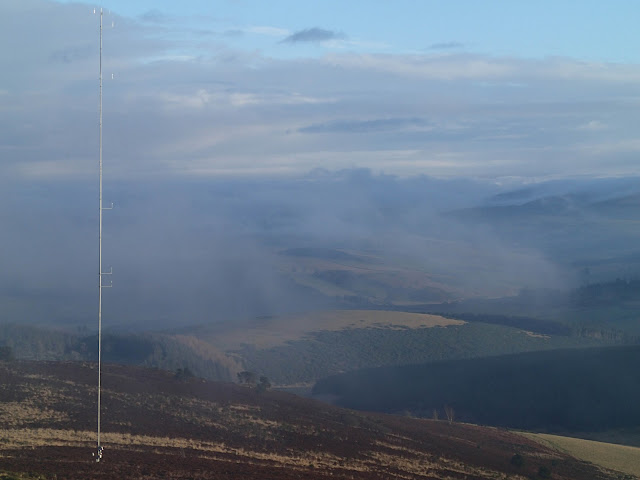 If you climb Coiliochbhar Hill (and you really should if you're able to), do it soon.  On the line of my descent towards the Howe of Alford is this anemometer mast.  There are plans to put a wind factory of large turbines on the slopes of this hill.
Posted by Ian Johnston at 21:05 2 comments:

A spectre in the mist 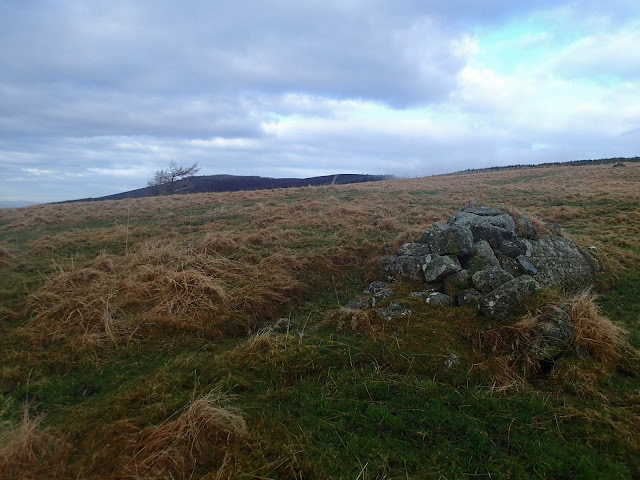 In the short daylight of winter, the lower hills can give great days.  On a grey and frankly unpromising day I planned to walk over Coiliochbhar Hill which would give the option to be dropped off at the start of the walk and to finish by walking back home.

A short walk along a minor rural road led to the start of a farm track heading up onto the open hillside.  Higher up I passed several very old grouse butts. These are small stone, wood or turf constructions used to give cover to shooters.  The grouse are then driven over the line of "guns" and the downed birds recovered by gun-dogs.  The construction of these butts is particularly old and the moor hereabouts is now used as rough grazing rather than grouse moor. 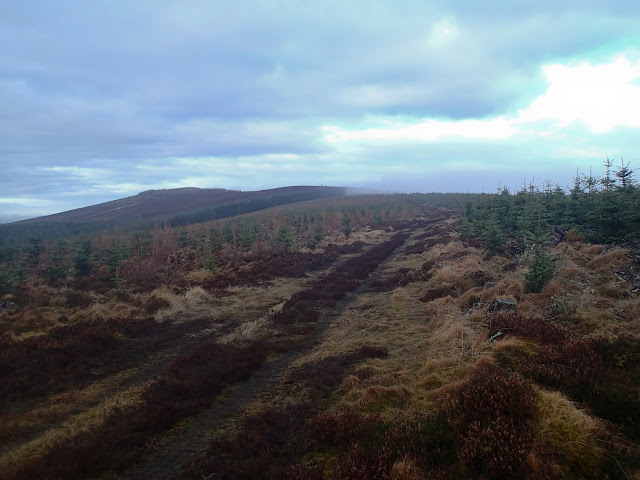 Above the grazing is a young plantation of spruce and pine trees.  At this age the trees give good habitat for wildlife; I saw tracks of Roe Deer and Fox on the track and was pleased to see a Black Grouse (Tetrao tetrix) near this wood as they're not at all common either locally or nationally.

Looking ahead beyond the plantation I could see the summit area of the hill - it really is a very easy ascent. 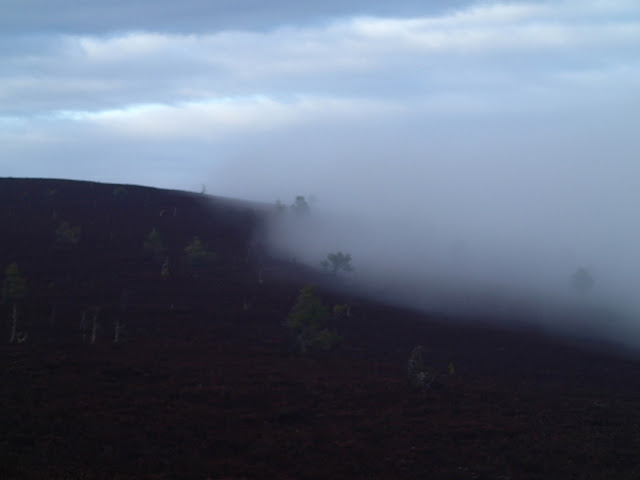 The weather was quite strange - on the east facing slopes of the hill a thick mist was rolling up towards the summit but never quite making it right to the ridge; the west facing slopes were completely clear. 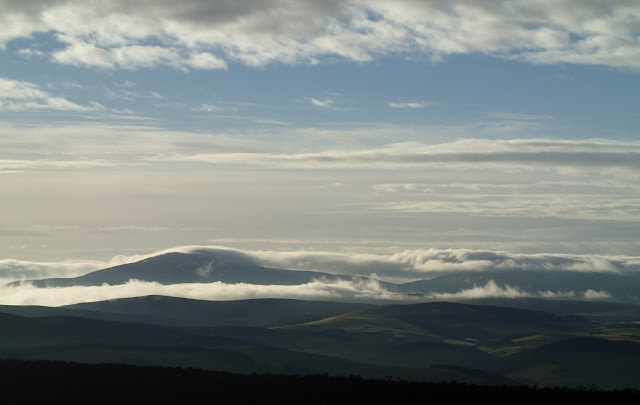 This pattern of mist and clear air was repeated across all the hills and valleys which I could see.  This is a view of Morven.  The glimpse of blue sky to the west was encouraging, offering the chance of some sunshine. 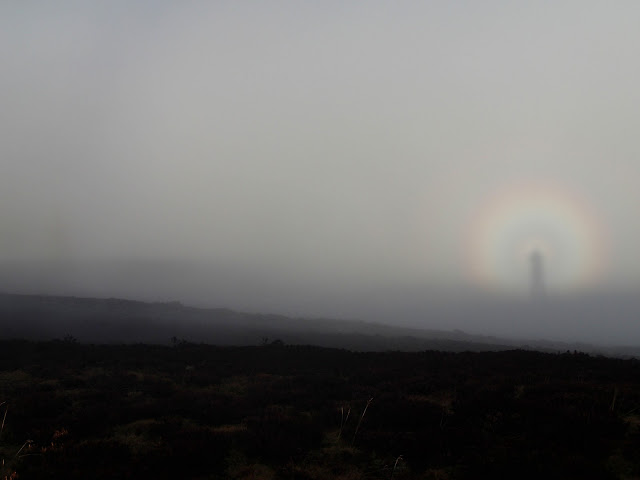 As the sun emerged from the cloudbank, it illuminated the mist below the ridgeline and the alignment of the sun behind me throwing my shadow onto the mist produced a nice Brocken Sprectre. 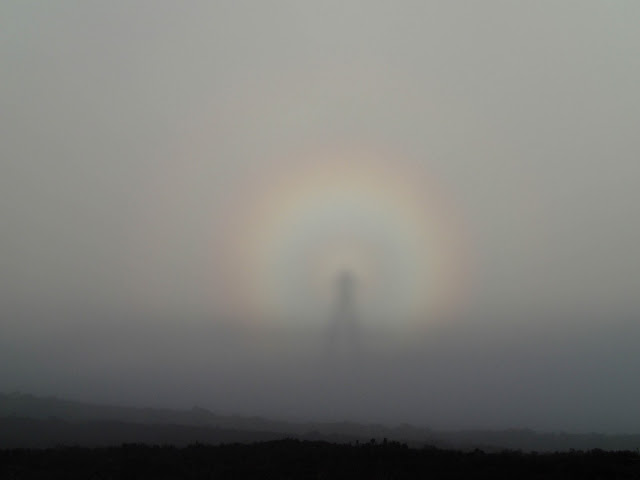 The conditions necessary to produce a Brocken Spectre aren't that common so I took several images (none of which show that the shadow and halo are pretty big).  I then walked along with my spectre towards the Larch wood which surrounds the summit of Coiliochbhar Hill.
Posted by Ian Johnston at 20:26 No comments:

A slow winter evening on the Moray Firth 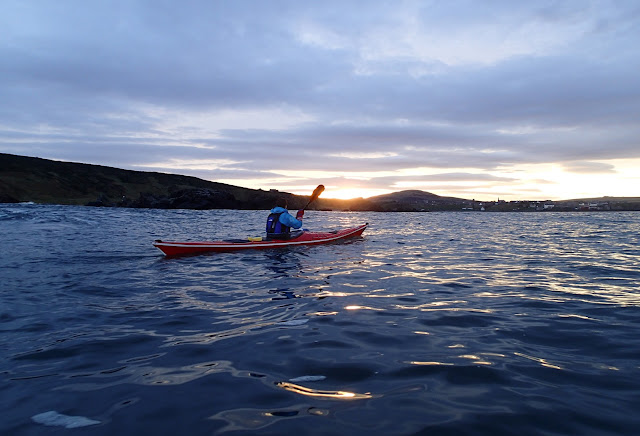 During the short winter days, the sun both rises and sets over the land to the south of the Moray Firth.  After a visit to the pebble beach of Strathmarchin Bay we paddled back around the East Head and into a  wash of light from the setting sun. 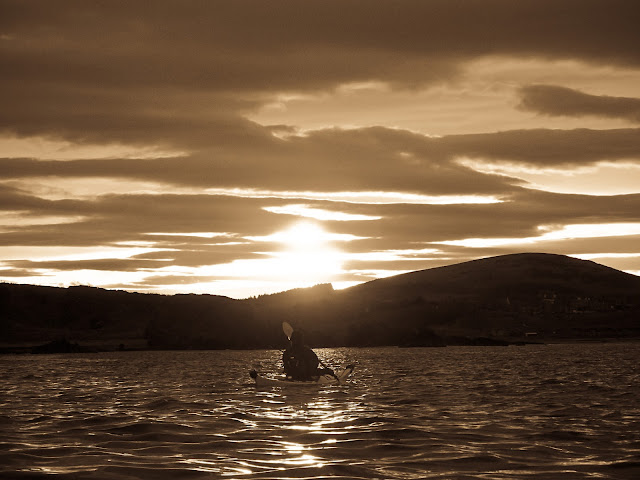 The wind had now completely died away; we paddled back towards Portsoy in a peaceful blaze of light.  Our pace had unconciously slowed - I don't think any of us really wanted to hurry towards the finish of such a fine day. 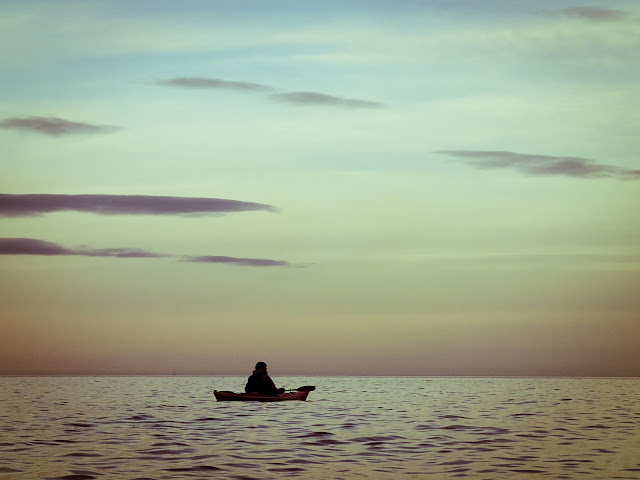 The evening was much better suited to a slow pace, just enjoying and absorbing the change out to sea as the sunset washed the sky with pink and pale gold.
Posted by Ian Johnston at 09:32 7 comments: 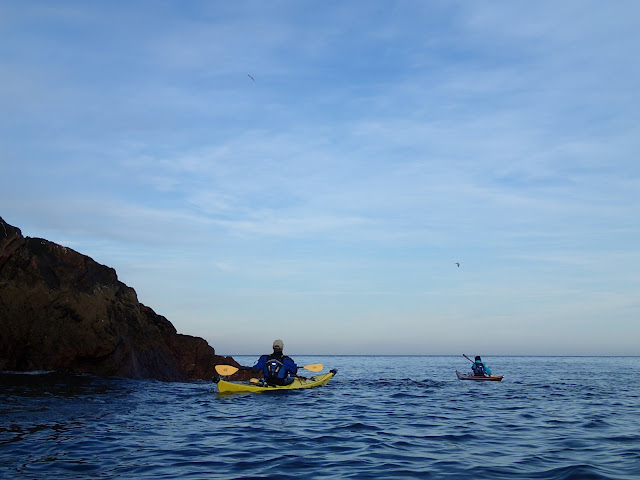 After a run of windy and inclement weather, conditions on the Moray Firth settled to relative calm, with a low swell forecast as a bonus.  Time to get back on the water!

I met up with Allan and Lorna at Portsoy for a leisurely first paddle of 2013.  We headed out of the harbour and turned west, rock-hopping along the cost towards the West Head.  Conditions were pretty much perfect; very little wind, mild temperatures and a low swell which gave some interest without being a problem.

A feature of the day was the number of Long-Tailed Duck (Clangula hyelamis) we saw.  These birds are fairly numerous winter visitors on the Moray Firth, but are normally shy and quick to take flight.  Today most seemed content to allow a closer approach. 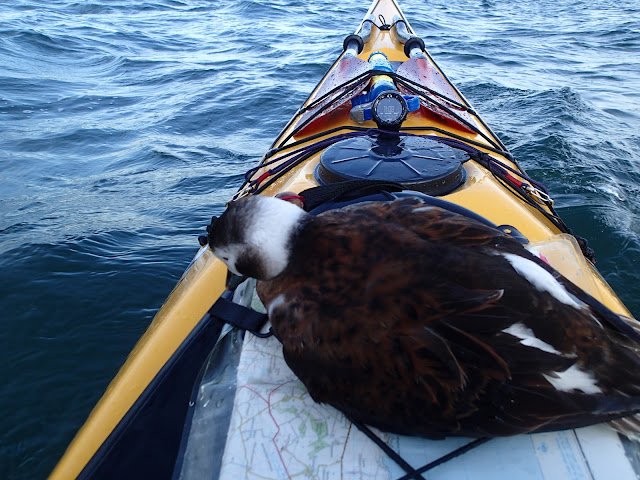 Then we came across this female which was clearly struggling to stay upright in the water.  I fished her out and put her on deck - she just sat without struggling and was obviously in some difficulty.  We carried her for a couple of kilometres along the coast to a beach where we could put her close under a ruined croft - above the tideline and away from any passing Gulls.  Sadly, we didn't hold out much hope she'd survive and wondered if the reluctance of the other birds to fly indicated an illness in the ducks. 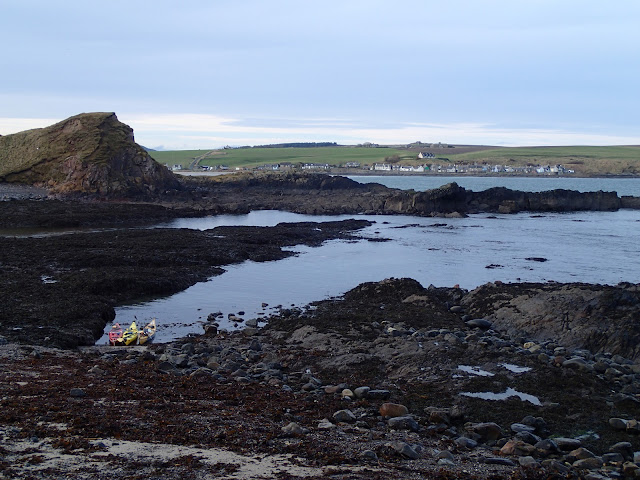 Having landed our passenger we decided to push on over Sandend Bay to Sandend for lunch.

A small wind got up during the short crossing to Sandend, the strongest that it got all day.  Even this small breeze died away whilst we had lunch above the tiny harbour. 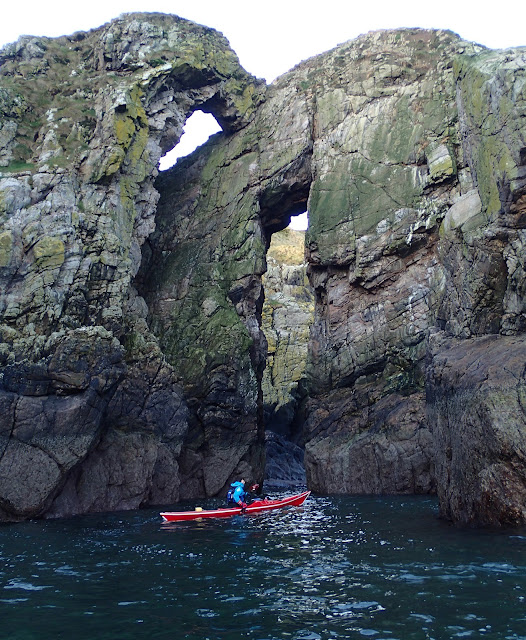 After lunch we headed back around the West Head to Portsoy Bay and checked out this arch.  The tide had been too low to paddle it on the way out, but with a nextra couple of feet of water it was now an easy passage.  It's a strange "disappearing" arch in that it is almost invisible until you're rit next to it.

As the weather was continuing to be so benign we decided to extend our paddle by going a little to the east of Portsoy.
Posted by Ian Johnston at 21:09 No comments:

"First footing" on the Correen Hills

"First footing" is the term given to the tradition of visiting a house early in the New Year. The 1st January dawned bright and cold - a good chance to first foot some local hills.

The Correen Hills form a broad horshoe ridge separating the Howe of Alford and Strathbogie.  The ascent is relatively gentle and the going underfoot good on grassy tracks and short heather - perfect to do some distance on a winter day.

20 minutes walk from home and I started the climb up Contlach Shank, a broad spur leading to an old quarry site.  The view back down to the valley shows the bleached winter grass of the farmland contrasting with the spruce plantations of Knockespoch forest.  A thin veil of cloud had appeared, but not for long.

Up on the ridge near Badingair Hill the northwesterly wind was bitingly cold and was discharging volleys of snow and stinging hail.  To the north is the distinctive hill of Tap o' Noth which has a large Pictish hillfort on the highest point - which must have been a cold place on a day like today!

Near to here I got a nice view of a Snow Bunting (Plectrophenax nivalis).  Not common locally, they are sometimes seen at valley level in hard winter weather.  The small bird was a brave sight and seemed perfectly at home amid the wind and hailstones. 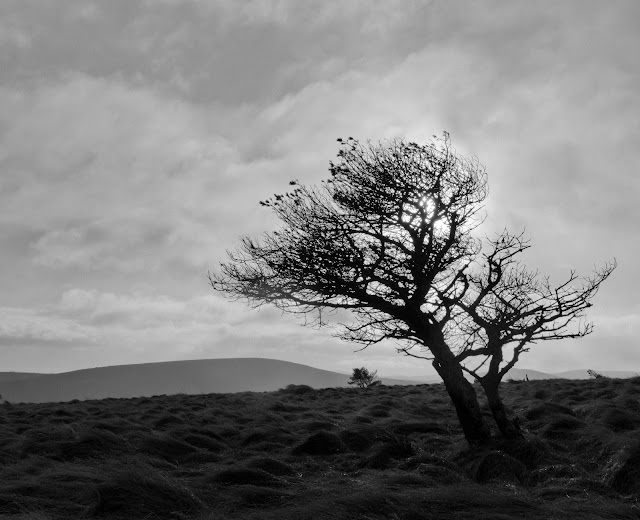 The day's highest point, Lord Arthur's Hill (at just 518 metres/1700 feet) looks a long way from Edinbanchory Hill, but the walking is easy on a grassy track and the distance just reels off - a feature of the Correen Hills as a whole really.

I was glad to turn south east and put the wind at my back - the tears were streaming out of my eyes it was that strong and cold.  Looking straight south east, the backdrop is Bennachie and Millstone Hill. 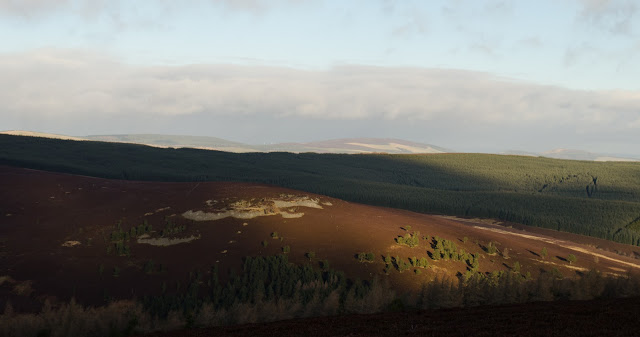 From the summit of Lord Arthur's Hill, the start of the ridge at Contlach Shank was lit by shafts of sunlight in an almost stroboscopic effect.  The light was deceptively warm looking where it touched the russets of the heather.  The quarry spoil heaps are clearly visible, and the dotted lines up the hillside are grouse butts, concealment for grouse shooters.  Both aspects of the former use of these hills.

I'd been the "first foot" for three hills, but a couple of walkers descending Lord Arthur's Hillhad enjoyed the year's first ascent of that hill.  No matter; first, second or whatever number, this was a fine way to start the new year. 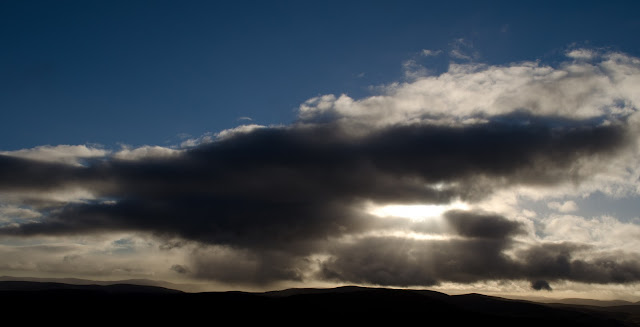 Already the sun was getting low, just skimming the southern horizon at a visible rate.

My descent from the summit goes across the heather dome of Black Hill and on down towards the Howe of Alford, which seemed to have been in sunshine most of the day.

A good hillwalking start to the year with 21 kilometres walked and some great views just a short walk from home.
Posted by Ian Johnston at 12:04 2 comments: