This week has seen some very stormy conditions around the north of Scotland.  The surf forecasts for the Moray Firth coast were indicating swells of 5 metres/16 feet which is very much higher than the norm.  The Shipping Forecast confirmed the conditions would be lively...."Faroes, Fair Isle, Cromarty...northerly severe gale force 9 occasionally storm 10, heavy snow showers, good becoming poor in showers..." - it was definitely weather worth seeing from safely onshore. 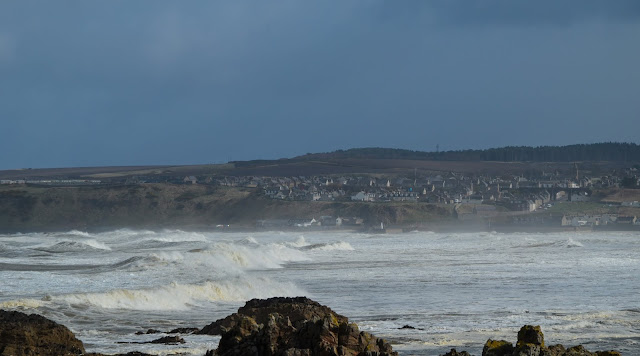 Lorna, Allan and I met at Cullen to take a walk along the shore and experience the weather. We managed to find parking spaces tucked behind buildings in the village otherwise we wouldn't have been able to safely open the doors of the cars! The whole bay was a mass of breaking white water and the wind so strong that walking against it was a considerable effort.  For context, severe gale force 9 winds are between 41-47mph sustained - storm force 10 is 48-55mph sustained.  On the beach it was comfortably in the region of 45mph. 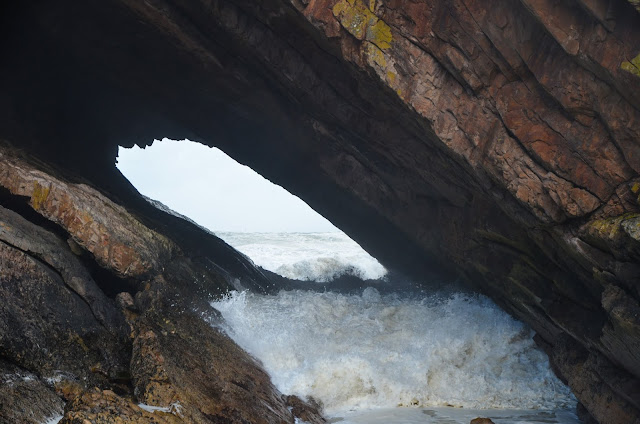 This is the Whale's Mou', a long cave-arch that we regularly sea kayak into and through.  On this day it was receiving huge breaking swells right through - surging up the cobbled beach on the shore side - a sobering view. 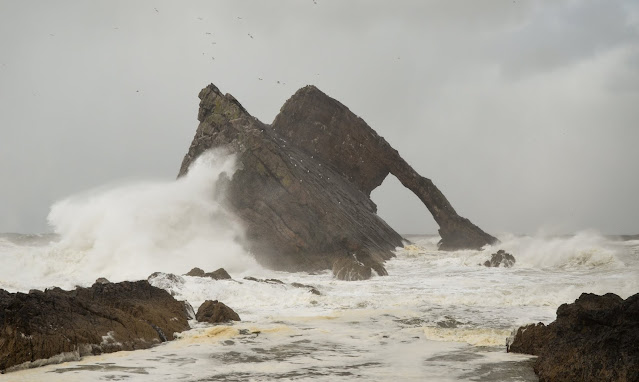 Even more impressive was the view of the Bow Fiddle.  This graceful arch is a favourite spot to paddle and to see it like this was a real eye-opener.  The scale shouldn't be underestimated - check the size of the rock in these posts - then look at the height of the waves in this image and the video below!

It was such a wild and spectacular experience - the air was filled with salt spray and on the cliff between Cullen Bay and Portknockie we found it really difficult to stand upright in the strength of the blast which was coming straight from the Arctic, bitingly cold and laden with snow and hail showers. The strength of the wind on this headland, accelerated up the cliff, was just incredible. 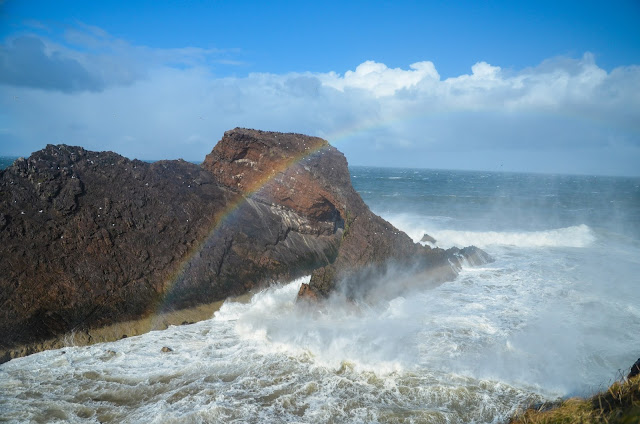 In bursts of sunshine the Bow Fiddle was creating its very own rainbow as big swells surged through - the bay in which it stands was a maelstrom of seething surf. 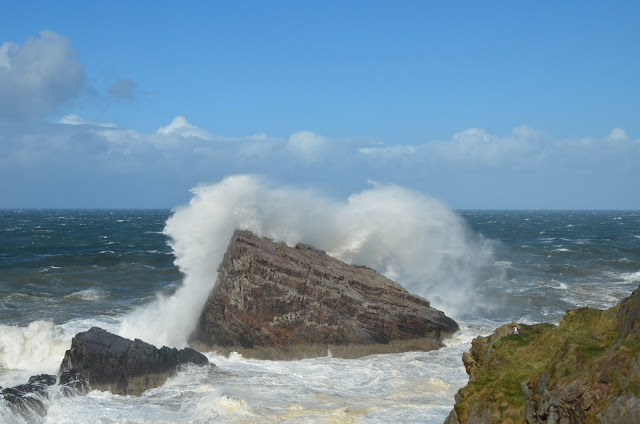 Standing square-on to the weather, the stack of the Craig (actually named "Shitten Craig" from the bird guano which covers it in Spring and Summer) was being battered by the swells.  Early nesting seabirds would have had no chance of remaining in place unfortunately, the whole stack was being covered by solid water at times.  At least this early in the season any birds which lose eggs or nests will be able to start again. 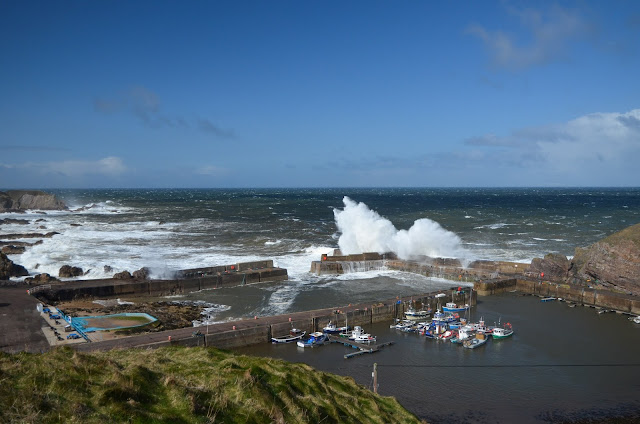 The outer harbour at Portknockie was doing its job!  Swells hitting the outer wall were being flung high into the air, but the boats in the inner harbour remained snug and safe - the impacts of the biggest of the swells could be heard even above the roaring wind - we wondered at the forces that were being unleashed.....

Allan commented later that it was the first time he'd travelled anywhere specifically to see some weather...we all agreed that it had been a very worthwhile experience!

Posted by Ian Johnston at 19:29 No comments: