Birds and rocks, Spring on the Moray Firth

After an enforced gap in my paddling and hillwalking of four months due to work, a calm and sunny day seemed too good to miss. 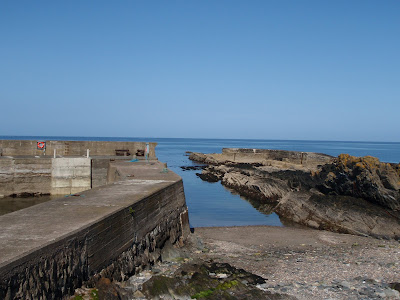 I set out from the little harbour of Sandend, which is situated where a deep channel cuts through the rock.  Just out of shot to the right, a sweeping sandy bay is a popular spot with surfers - not today though in the calm conditions 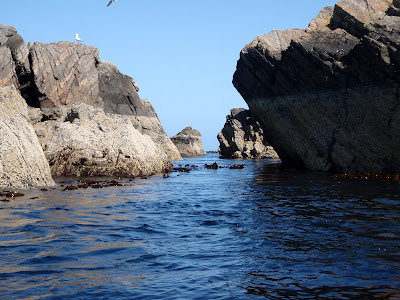 Heading east across the bay, I meandered out to the West Head, rockhopping along the rugged cliffs.  The West Head has a couple of channels cutting right thorough it.  In the more usual conditions of swell on this coast they make intimidating paddling with surf and amplified swell surging through.  This is the wider of the two, and today was easy. 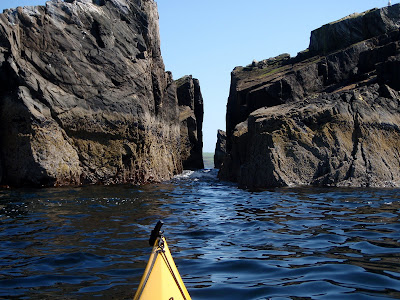 This is the narrower channel.  I've only ever managed to paddle through this once; even with today's low swell it looked difficult, the powerful surges creating a rise and fall of about two metres.  I backed off again! Going around the point, soupy conditions showed that an occasional swell was still running.

Spring on the east coast brings seabirds in their tens of thousands. Although quite early in the season, Kittiwakes, Gulls and fulmars are on nests. uillemots, Razorbills and the gorgeous Black Guillemots are in rafts off the cliffs along with Eider and Long-Tailed Ducks. Farther offshore Gannets pass in dazzling white lines from their breeding cliffs near Troup Head. A Kestrel was calling constantly at the gulls passing it's cliff nest site; it's going to be a stressful season for this bird! And, a very special sighting. Heading purposefully east toward Troup Head was a Sea Eagle. I had to double and treble check; I've never seen one on the east coast, perhaps this is one of the birds released in Fife. Fantastic to see, hopefully this will be the start of a repopulation of these great birds. 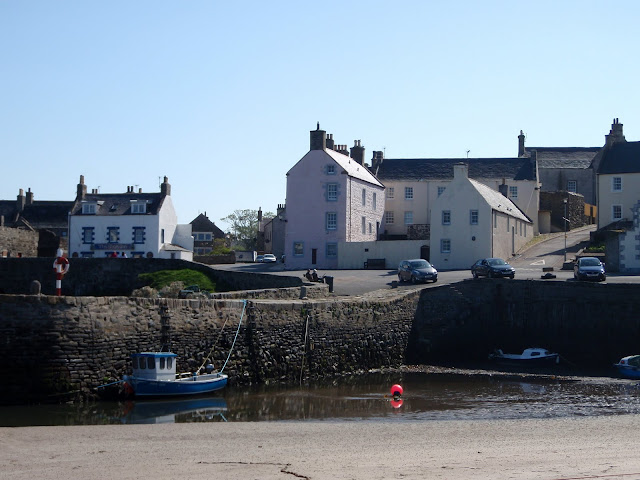 I stopped for a lunch break in the pleasant harbour of Portsoy.  Peaceful today, the village hosts a Traditional Boat Festival each summer which brings throngs of folk from all over the country and beyond. 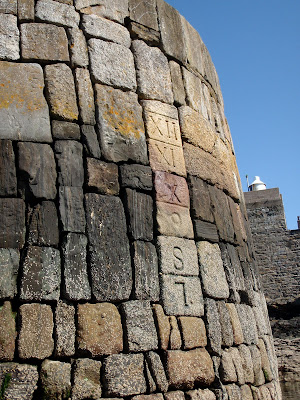 Theharbour wall at Portsoy is unusual in that it's built from stones placed vertically.  I don't know of any other harbours in the northeast of Scotland built this way.  The depth is indicated by numbers inscribed on stones - interestingly the numbers change to Roman numerals half way up - perhaps the mason couldn't fit the Roman equivalents for 7, 8 and 9 on the faces of the stones!

A slow paddle took me back to Sandend where the sun was hot and strong.  It's good to be back!
Posted by Ian Johnston at 20:34 No comments:

A colourful day on the Dorset cliffs

Whilst I've been at work, I've had a few opportunities to explore the Dorset coast on half day walks.  It's a surprisingly wild coast in parts and very varied.  In superb Spring weather yesterday, the walk along the stretch from Bowleaze to the White Nothe was truly beautiful.  The air was alive with birdsong, and I had my first view this year of a Common Sandpiper - the migrants are arriving in force.

The view to the east was truly exceptional 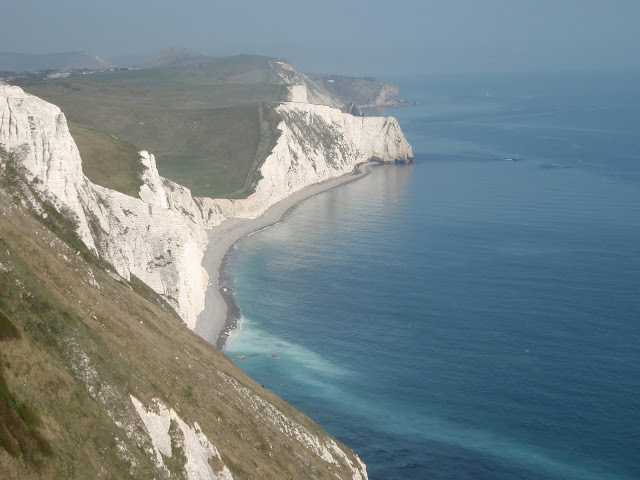 The chalk cliffs of this part of the coast were dazzlingly white and contrasting superbly with a calm and very blue sea.  This is the view from the headland of White Nothe looking over Bat's Head and Lulworth to the distant Purbeck Hills.  The top of the detached arch of Durdle Door is just visible immediately beyond Bat's Head, which itself has a small arch 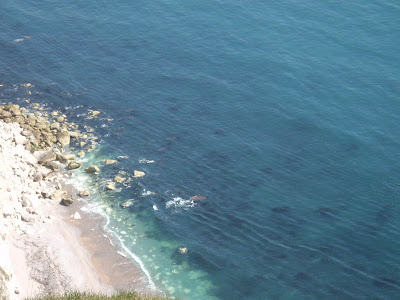 Looking down from the cliffs, the water was clear enough to see every detail of the reefs.  I sat in the sun, enjoying the warmth and thinking what a great day it would be for sea kayaking.  As if by magic.... 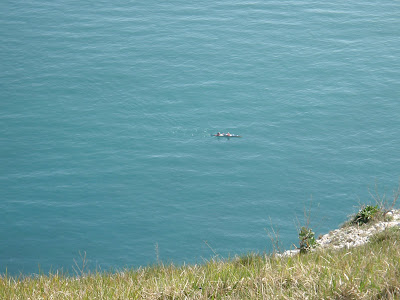 First a double kayak passed, the air so still that I could clearly make out the voices and paddle splashes way below 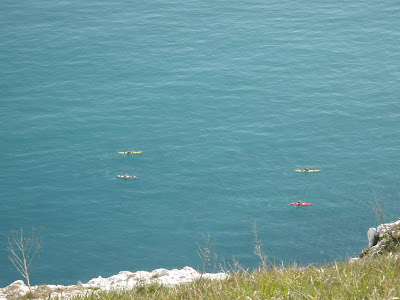 And then four brightly coloured singles passed, all heading west toward Ringstead..  I lost sight of the lucky paddlers as they passed Ringstead, maybe heading to Weymouth.  They (and I) were treated to a great day, a real hint of the summer to come.

I fairly caught the sun, my face was glowing during the eveening - one more colour to add to the day!
Posted by Ian Johnston at 21:34 4 comments: