In icy conditions the soles of walking boots and shoes are seriously compromised in terms of grip, and some form of traction is very desirable.  On steep ground or on the hill, especially in the mixed conditions typical of Scotland I use 12-point articulated crampons with stiff mountain boots but this combination is not well suited to tracks, forest roads or footpaths.
In autumn 2020 I purchased a set of Kahtoola Micropsikes to use on my regular walks when things got icy.  This review is based on regular use through winter 2020-21 which proved to be exceptionally cold and prolonged even by Aberdeenshire standards.  The Microspikes have been used in temperatures from 3 Celsius down to -20 Celsius and in underfoot conditions ranging from hard, frozen turf, iced forest fire-roads, refrozen snow, in hard, clear ice and melting ice. 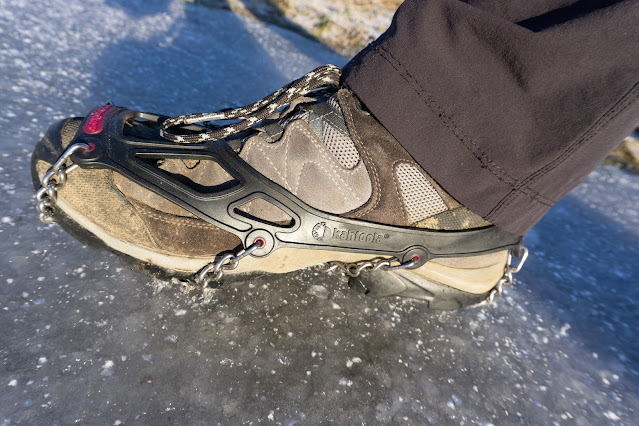 The Microspikes don't require stiff or rigid soled boots which means they should fit a range of footwear (indeed many folk use them on trail running shoes).  The upper part is a shaped Thermoplastic Elastomer (TPE) harness with reinforced eyelets which is claimed to retain its elasticity down to -30 Celsius.

The Microspikes are quick and easy to fit with a little practice and don't require footwear to be removed in order to put them on and take them off.  The technique is to place the forefoot into position then use a raised tab on the rear of the harness to pull the heel into place.  I found that I was able to easily fit and remove the Microspikes on-the-go, which is useful when they may not be needed for all of a walking route.

The design of the harness holds the spikes in place nicely and there is no tendency for the footwear to slide out even on quite steep descents.  A real positive is that I haven't experienced any pressure points or "cold spots" from pressure as can happen with some crampons.  In the image above the Microspikes are being used with a walking shoe on hard ice. 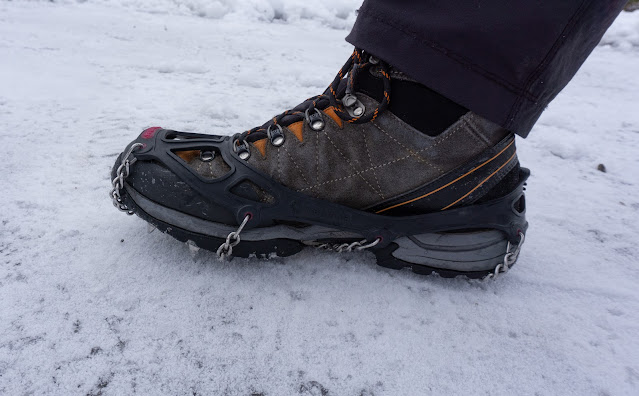 In this image they are being used with a general purpose walking boot in mixed conditions with heavy frost and frozen patches of forest road.  Unlike with crampons, it's not necessary to use a "duck waddle" modification to your natural walking style when using the Microspikes, due partly to the much shorter length of the spikes compared to crampons and also because there are no front points which could catch the ground. 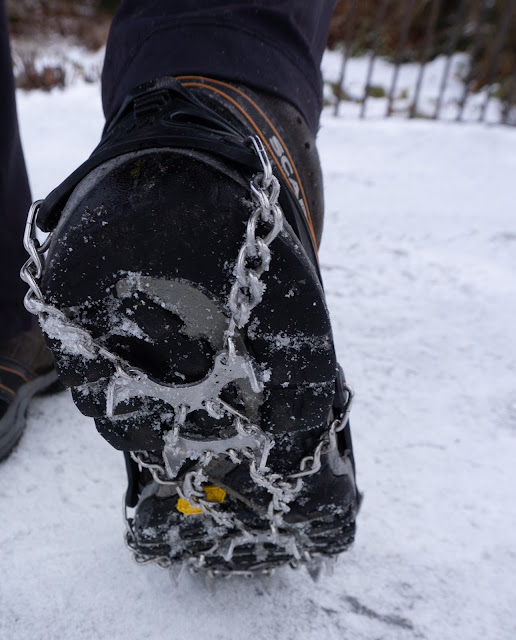 The chain and harness hold the Microspikes in place very well, I've not experienced any misalignment when walking across level or rough terrain.  Sometimes with articulated crampons strapped tightly to stiff winter boots and secured with toe bail and heel fastener there can be cold spots on the feet from the pressure.  I haven't experienced any cold spots with the Microspikes as they aren't holding the foot rigid and any pressure is distributed across the harness.
So, although for mountain walking my preferred combination is and always will be stiff winter boots and 12-point articulated crampons, the Microspikes definitely bring benefit in winter walking for lower levels, making otherwise inaccessible icy paths easy to walk.  I can also see a place for them in Spring mountain walking when most of the snow is off the hills and there are just occasional patches to be crossed which don't require front-pointing technique.
The Microspikes retail for around £50 in the UK, and I think that they're very good value at that price.  If you walk regularly on icy tracks and paths, live in an area which has winter conditions most years or walk on hills with some icy patches, they're well worth considering as part of your kit.  I purchased my set from Icegripper, a main UK importer of Kahtoola products.  The Microspikes arrived quickly, and I can vouch for the customer service - the initial set sent out were the wrong size and when I informed the company the correct size were sent out before I returned the original set.
Conflict of interest statement:  I purchased my set of Microspikes at full retail price an have no connection with either Kahtoola or Icegripper other than being a satisfied customer.
Posted by Ian Johnston at 20:42 1 comment: 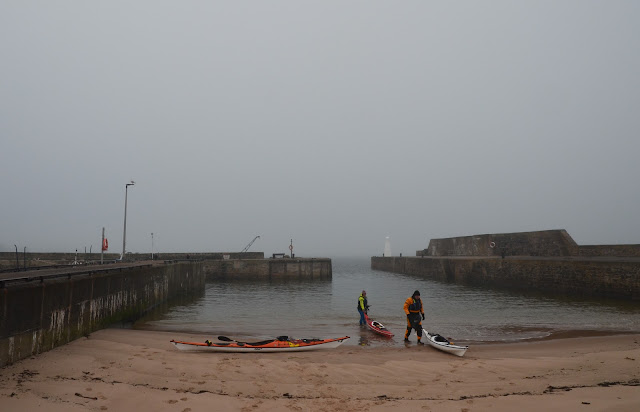 Life, work and other things meant that this blog was a little neglected during 2021.  That's not to say that I didn't manage to get out and about though, and there will be some catch-up posts coming in the next few weeks.

Just a couple of days prior to the winter solstice and there isn't much daylight here in Aberdeenshire, realistically six hours is what we get.  When Allan and Lorna and I left our homes in inland Aberdeenshire we were in bright sunshine with temperatures well below zero Celsius.....just 45 minutes drive north to the Moray Firth coast and things were a lot different; very misty conditions and the temperature a couple of degrees above freezing.  With just a light wind and a low swell we decided to set out from Cullen, paddle east to Sandend and return to Cullen.  It's an area we know very well but we took no chances with the visibility and set up a GPS in case things closed in further. 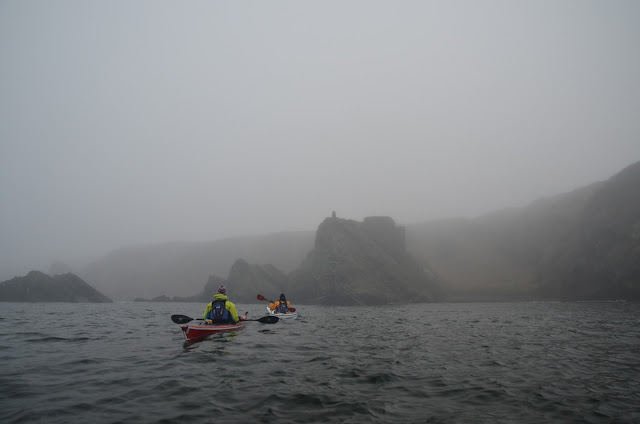 The misty conditions certainly made for an atmospheric journey through the rock stacks which are such a feature of this coast, everything seemed out of scale as towers and rocks loomed out of the mist.  We mentally ticked off known landmarks as we went and had soon warmed up from the chilly start. 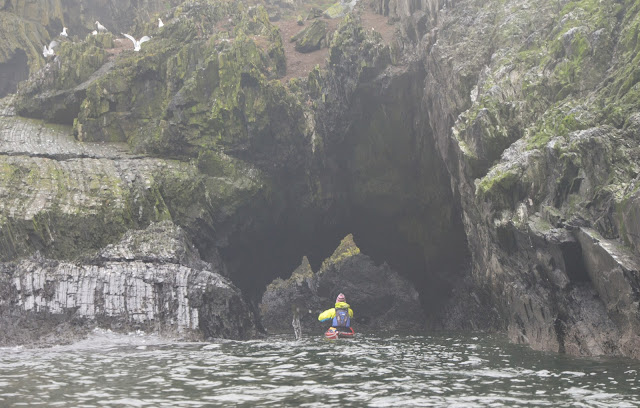 The swell was low but long-period and as is typical on this coast had "sets" of two or three much larger swells at regular intervals.  Near to top of the tide this cave-arch doesn't have much headroom, so good timing is a must! 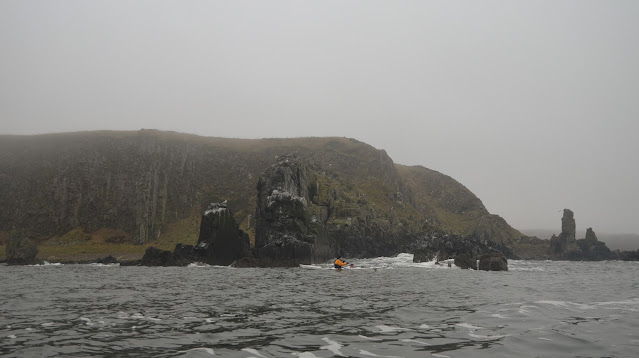 We took lunch in the tiny harbour at Sandend before heading back around to Cullen.  The mist had started to lift a little and the swell eased to give a leisurely return leg.
An unremarkable paddle of just 13km maybe, but as usual this coast gave plenty of interest, and it was a bonus to be able to get out in our kayaks right on the cusp of the shortest day of the year.
Posted by Ian Johnston at 20:04 No comments: