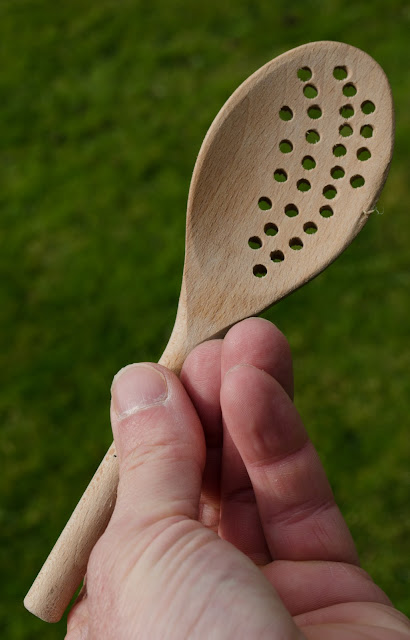 I particularly like pieces of kit which are simple, especially if an item can perform more than one function.  For cooking in a non-stick pan on camping or bothy trips I wanted a good spoon which wouldn't scratch the pot. Normally I cook and eat with a MSR titanium spoon which doubles as a tool for maintaining one of my stoves, an MSR Dragonfly, but clearly titanium would damage a non-stick pot.

I also wanted something to help when straining vegetables, rice or pasta in the pan.  I couldn't find anything which fitted the bill properly on either count, lots of Lexan spoons but none big enough to use as a cooking utensil, and all the strainers were to big to carry easily in a rucsac or a boat.  So, I decided to make my own.

A wooden spoon from my local hardware store cost less than a pound.  I cut off about half of the handle, measured so that the spoon would fit inside the non-stick pan but still be long enough to use for cooking with.  Then I used a drill to make a series of holes in the spoon so that I could use it for straining. The longest row of holes are drilled to follow the profile of the pot rim, though it's not really necessary to be so precise!

So here it is the Spoon-Strainer - or "Sprainer"!  I can report that it works rather well, and is a good deal less expensive than some of the alternatives :o)
Posted by Ian Johnston at 22:27 5 comments: