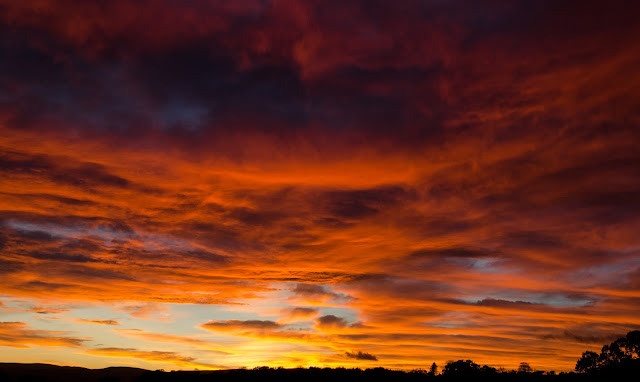 Yesterday evening's sunset over the Aberdeenshire countryside - a stunningly rich blaze of colour.... 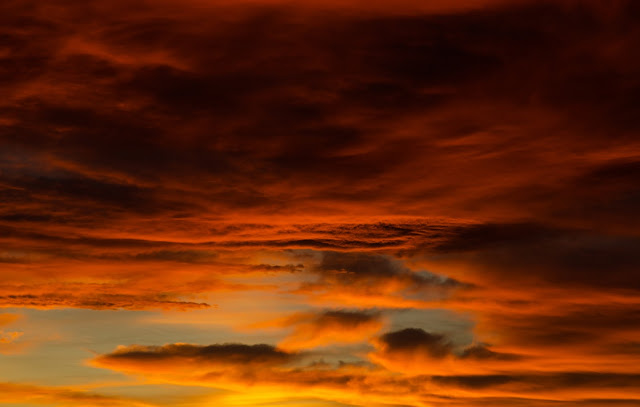 ...the intensity of which charged the whole sky with incendiary shades and changed the quality of the air around us as we took an evening walk.  One of those evenings which take the breath away.
Posted by Ian Johnston at 08:02 8 comments: 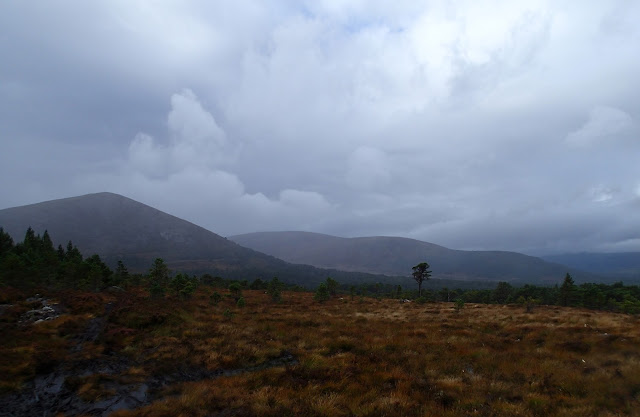 Afte two days of really lovely October conditions the weather broke.  I was staying at Rothiemurchus Lodge and through the night the whole building was shaken by violent gusts of wind - my thoughts were with the Duke of Edinburgh's teams over on Deeside but actually they had quite calm conditions low down in Glen Derry.

I set out into heavy rain and scudding cloud.  What this image can't show is the violence of the wind; tearing gusts which blew sheets of rainwater from the ground and roared through the trees. 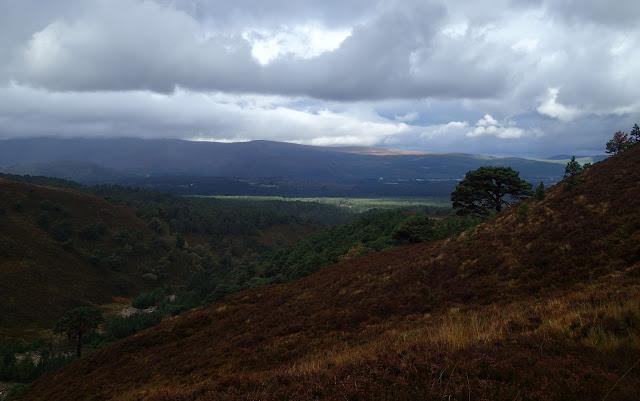 Climbing high above the woods of Rothiemurchus, a glimpse on sunlight on the far side of the Spey valley would be the last for some hours. 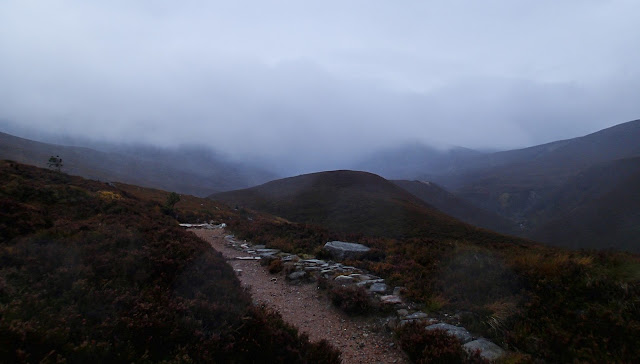 Ahead, the weather looked particularly challenging as cloud and rain belched out of the jaws of the Lairig Ghru.  The rain now set in with real venom and the wind, dead against me, slowed progress right down. 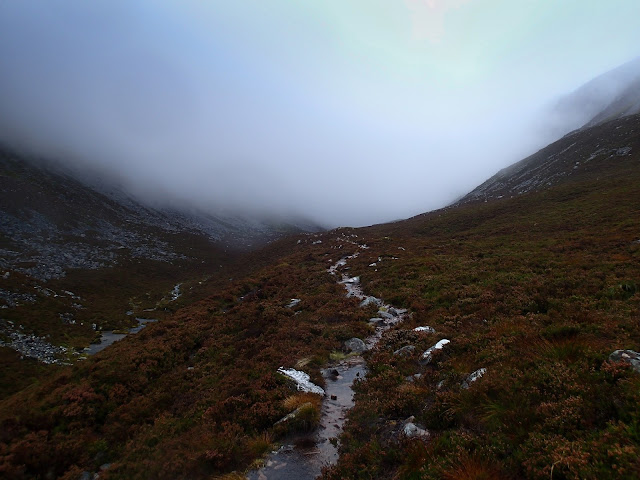 At some points I simply had to turn my back to the wind and rain as it became too painful to face into the combination of 60mph wind, lashing rain and gravel blown from the path.  The Lairig Ghru is one of the great through-routes of the Cairngorms, and indeed of Scotland.  A huge former glacial breach linking Deeside with Speyside, it slices through the Cairngorm plateau reaching 835m at its highest point.  Today it was perfectly orentied with the wind, which was roaring through, almost stopping progress at times.

In normal circumstances I'd have avoided heading up into such weather, but I intended to meet the D of E teams as they came through the other way.  They would have this weather at their backs but would still find it more challenging than previous experiences in the hills. 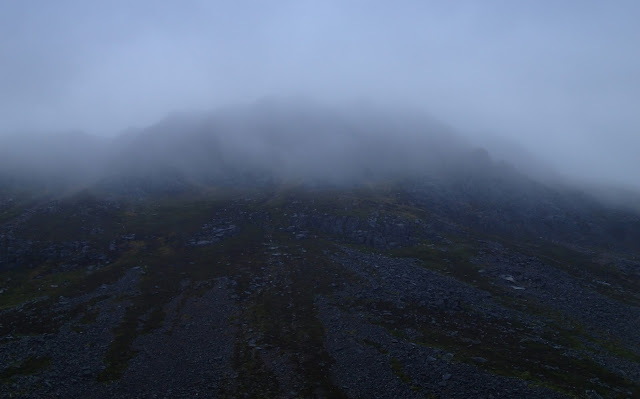 Hunkered down at the Pools of Dee, a few small lochans near the high point of the pass, I watched the clouds racing past.  The main plateau lies some 400 metres above the Lairig and I could only imagine the power of the wind up there as it raced unchecked over the dome of the Cairngorms in the first real "blow" of the autumn.

In these conditions, and particularly in winter, the wind is a relentless foe.  I've had some of my hardest fights not too far from this spot, the wind sapping energy, strength and willpower - a fundamental and fierce experience.  There's a wild pleasure in being able to operate on the hills in such conditions though - a feeling almost impossible to explain to someone who doesn't walk or climb in the mountains. 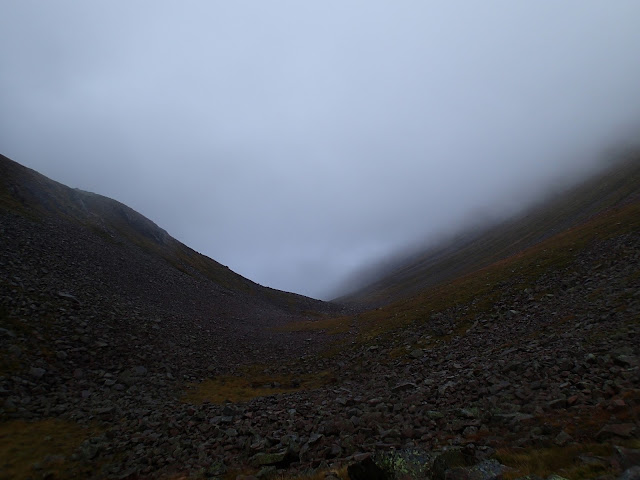 Briefly poking my head up occasionally to scan for folk coming through, I settled down for what might be a long wait. 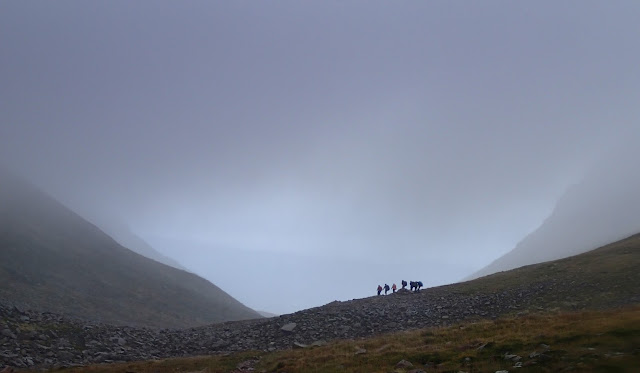 But remarkably, both teams were keeping good time and going well - impressed but not overawed by the conditions.  It was a relief to put my back to the wind as I headed after them - progress suddenly seemed so much easier and now th trick was not getting blown over. 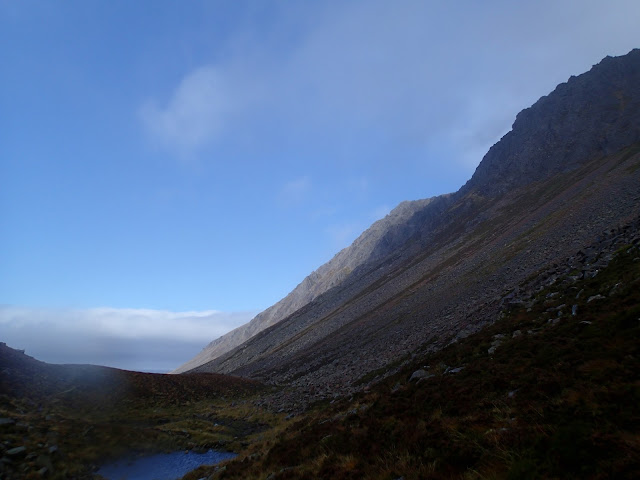 And then, one of those moments.......the rain ceased and the cloud tore apart as if a curtain had been pulled; we walked into bright sunshine and clear air.  The wind stayed at the same severe gale force, but what a difference! 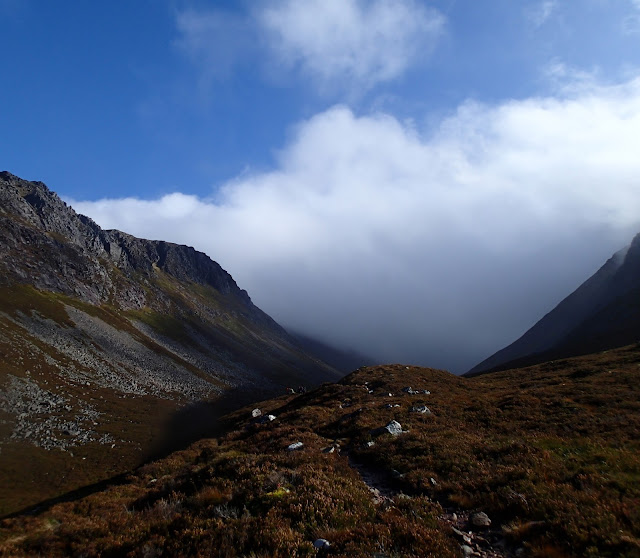 Looking back up into the Lairig, the cloud was now racing across the pass rather than straight down.  The shif of wind as a front passed had totally altered the conditions in the space of a few moments - a real Cairngorm contrast.
Posted by Ian Johnston at 21:44 2 comments: 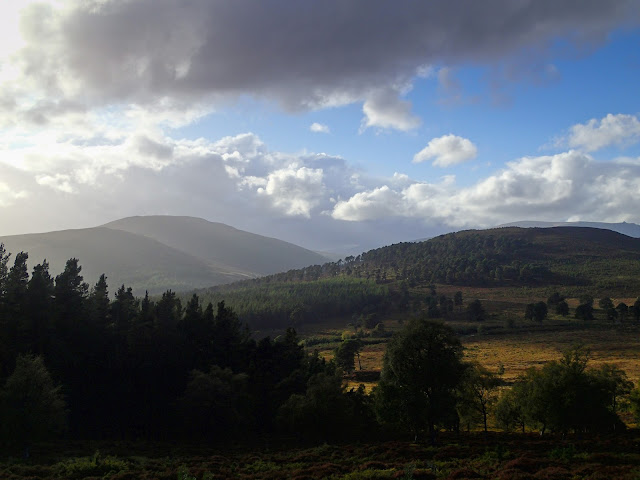 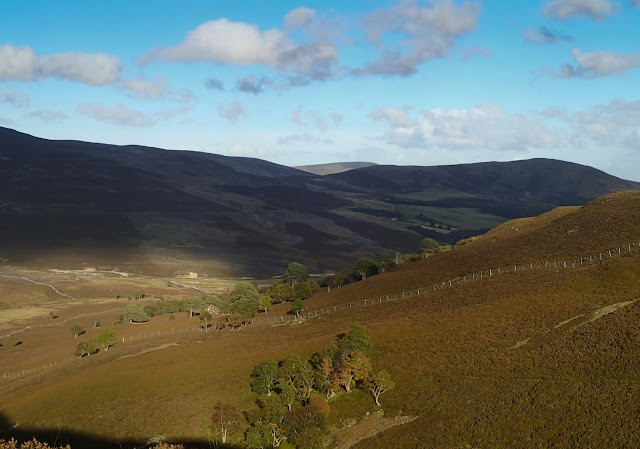 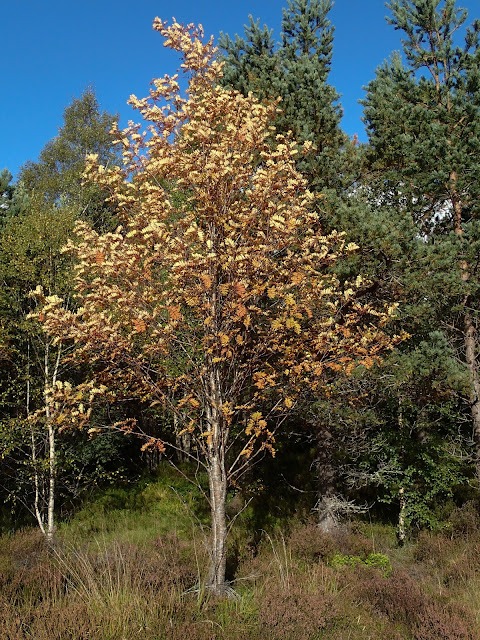 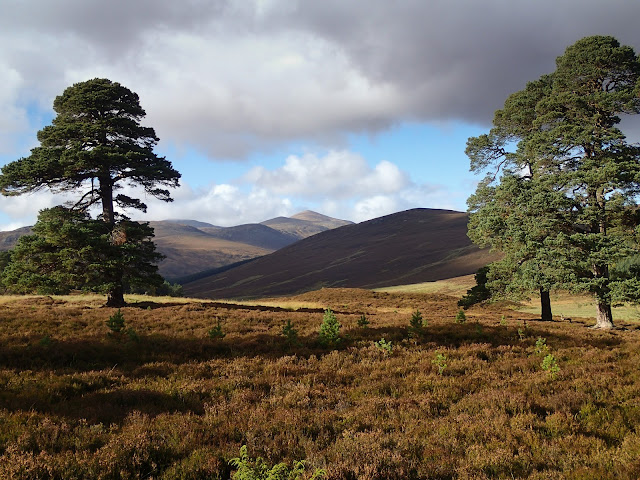 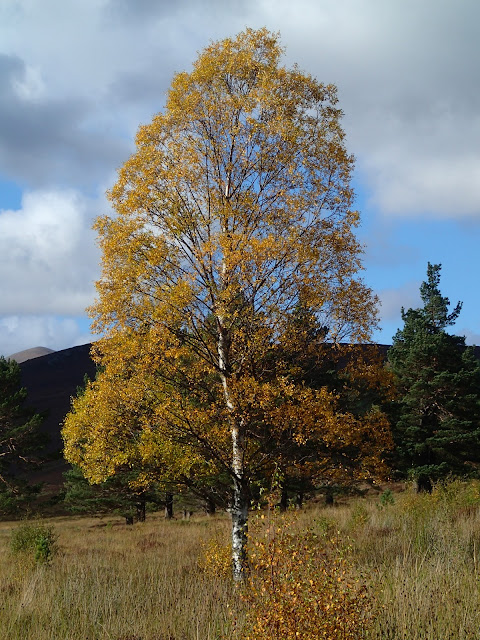 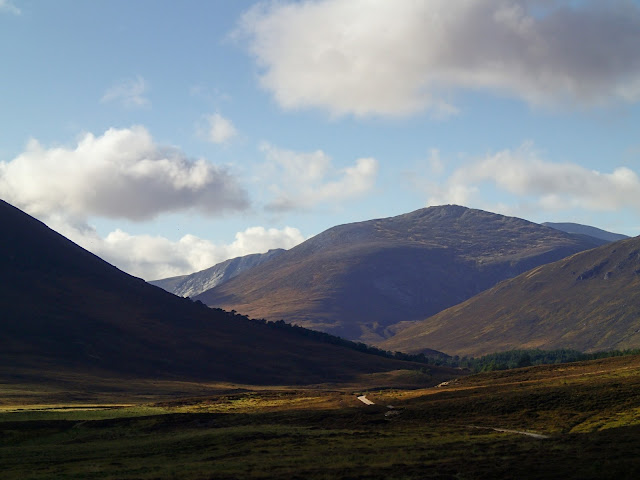 ........because the corrie at the base of Derry Cairngorm is called Coire Craobh an Oir (Corrie of the tree of gold).  The teams would journey around the base of Derry Cairngorm and below the dark spur of Devil's Point which can just be glimpsed centre left in this image.  Although the weather looked settled, the forecast told a very different story and their day would bring them challenge in plentiful supply.
Posted by Ian Johnston at 12:20 No comments: 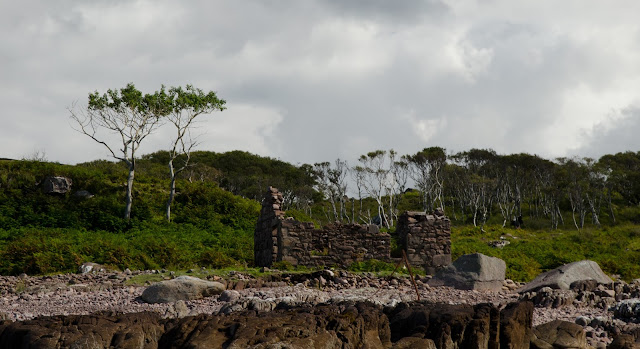 Continuing our paddle along the north side of Loch Torridon, Allan and I paused at this ruin.  It may have been a croft or a fishing station, but would have been a tough place in which to make a living. 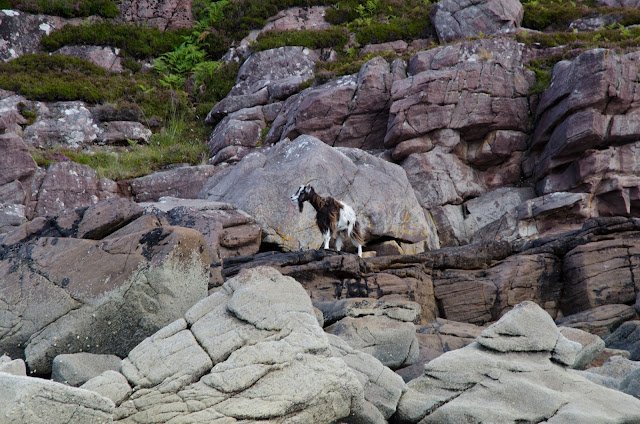 For most of this part of the loch the shore is steep and rocky - difficult to walk along...unless you happen to be perfectly adapted of course.  We saw several goats and I've met with them previously in this area. 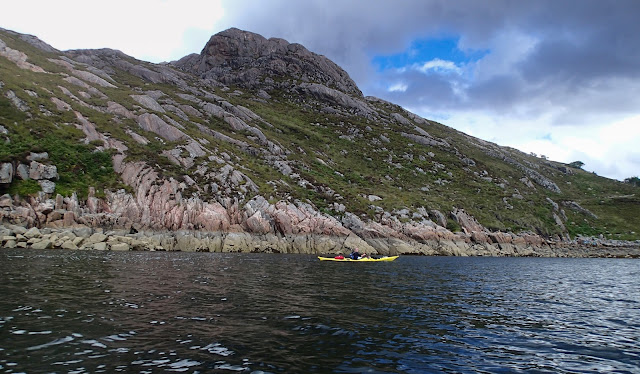 Approaching Loch Diabaig, there's a change in the geology from sandstone to Lewisian Gneiss and the scenery becomes suddenly more rugged but with very few landing places...... 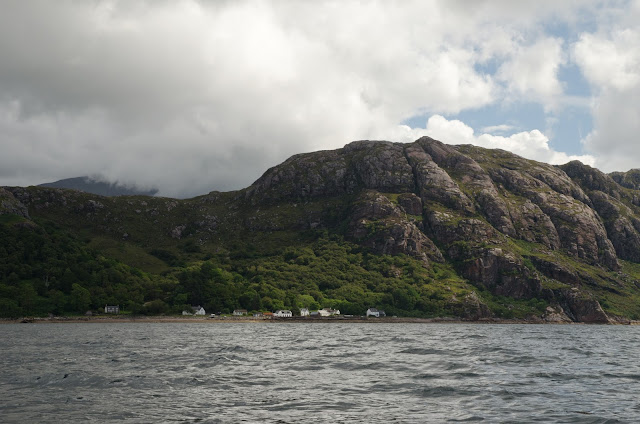 .....apart from the shore at the head of Loch Diabaig.  The settlement of Lower Diabaig must be one of the trickiest places in Scotland to reach by road, a minor road at the end of a long minor road which twists over the Bealach na Gaoithe (pass of the winds) before descending steeply to sea level again - truly between a rock and a hard place. 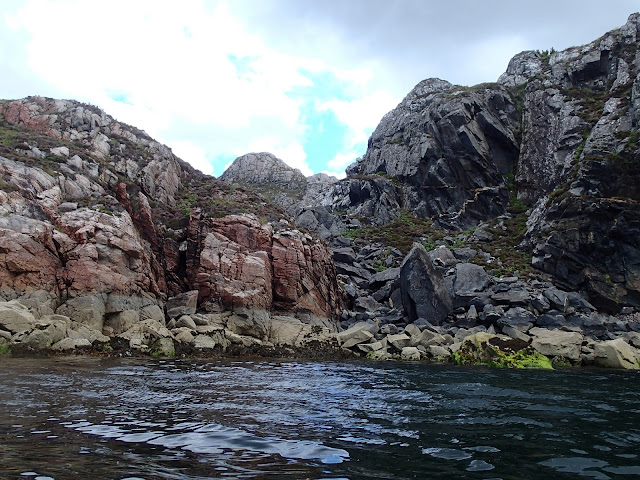 Heading out of Loch Diabaig and towards the narrows separating outer and middle Loch Torridon there's another change in the rock type and this time the contact zone is unmistakeable.  On one side of the contact there's a pink sedimentary rock, and on the other a dark metamorphised igneous rock. 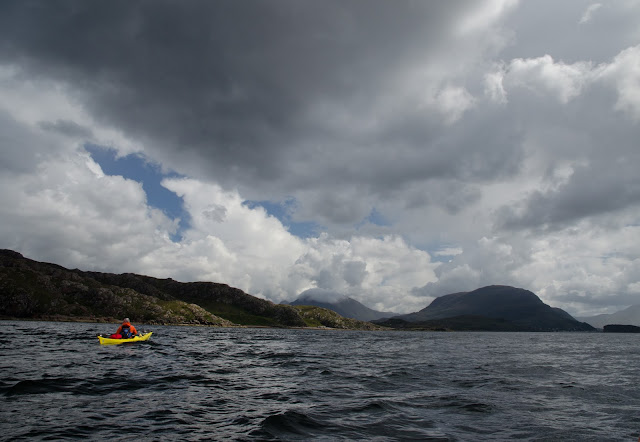 We were by now looking at a couple of options for a second night camping.  There are surprisingly few good spots; we checked out one I've used before on a small promontory before deciding on a patch of level ground on the south shore of the loch.  As it was quite early in the afternoon we decided to paddle part of the upper loch before pitching our tents. 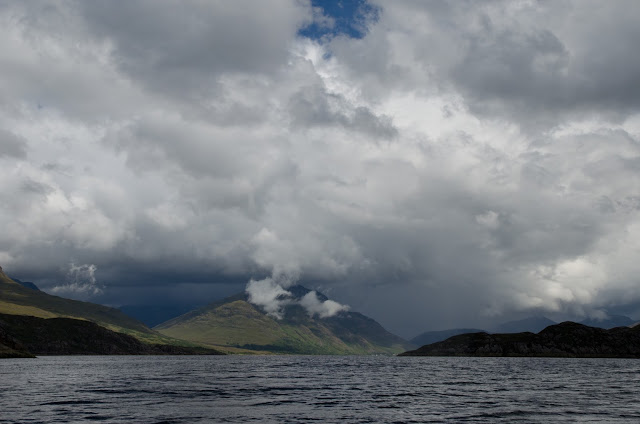 As we passed through the narrows by Eilean a' Chaol (Island of the kyle (narrow)) the view up to the head of the loch showed that a change in the weather was approaching.  The big Torridon hills were obscured by thick cloud and we could see heavy rain falling.  As this was headed our way we started back towards our intended campsite, but the rain beat us.

As the rain started the wind dropped to a dead calm - and we knew exactly what would be waiting for us on the shore!  Almost as soon as we stepped from the boats we were attacked by midges which seemed undeterred by the rain.  We now had a fairly easy decision - we were only about half an hour's paddling from Shieldaig and our car; and we could easily get home that evening if we chose to.  The prospect of a night confined to our tents to shelter from both rain and midges wasn't that appealing - after all, our trip ws meant as a relaxed couple of days! 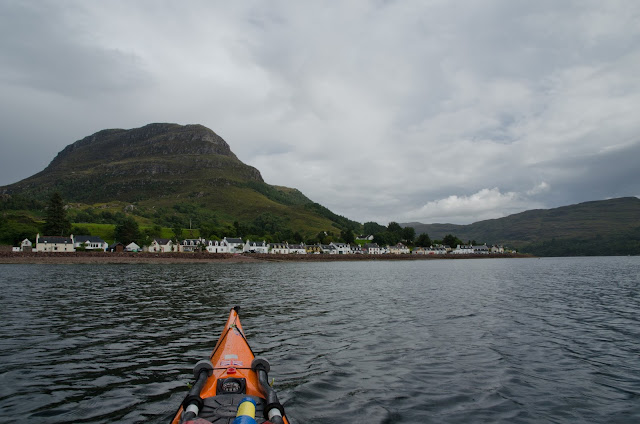 We arrived at a decision pretty quickly and got back in the boats to paddle across to Shiledaig.  Even on the main street of the village the midges were biting us as we loaded the boats onto the car.

Loch Torridon had given us a good couple of days paddling and had fulfilled the aim of sheltered options in very changeable winds and weather.  When the wind is in the north or south it's a good alternative to more exposed parts of the north west coast, though the topography of hills and the loch does tend to funnel any easterly winds.
Posted by Ian Johnston at 19:37 1 comment: