A February day in Glen Quoich 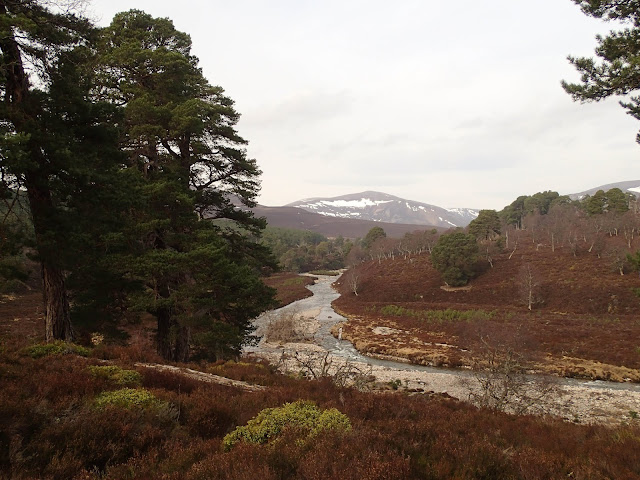 February has continued to be unseasonably warm with temperatures more usually associated with late Spring than late Winter.  On a "normal" February day a walk up Glen Quoich would need most of the gear required for winter hillwalking, but certainly not this year.  The glen is entirely bare of snow and even the mountains only have patches of old snow.  So complete is the thaw that the Quoich Water is at a low volume - most of the snow having already melted. 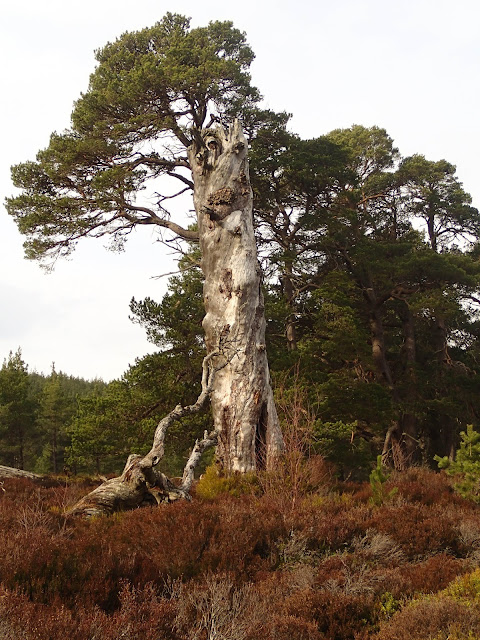 There are some wonderful areas of old growth Caledonian pine forest in the lower part of the glen, standing deadwood mixed in amongst mature pines and, pleasingly, lots of young trees.  It's not so many years since you could walk in this area and see lots of Red Deer but very few young trees.  The National Trust for Scotland took a decision to reduce deer numbers on the ground and the result is a much more healthy regenerating forest.  A healthier forest will also be good for the deer going forward as they're animals of forests rather than moorland.

The spiral grain of a Scots Pine (Pinus sylvestris) can be clearly seen in the dead trunk above.  This is a characteristic of the species and seems always to spiral clockwise.  It's thought that spiral grain is an adaptation which strengthens the tree and enables it to resist wind stresses better.  Some mature pines have huge crowns and of course retain their needles through the northern winter so an adaptation to resist wind stress seems to make sense. 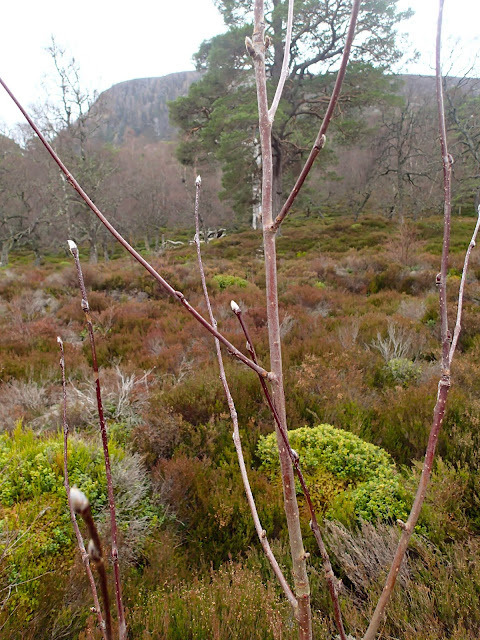 At the opposite end of the scale from the huge dead pine trunk, there are clear signs of the coming Spring, especially in the smaller trees like this Rowan (Sorbus aucuparia), even though the colours of the wood are generally muted at this time of year it won't be too long before the fresh greens of Spring emerge. 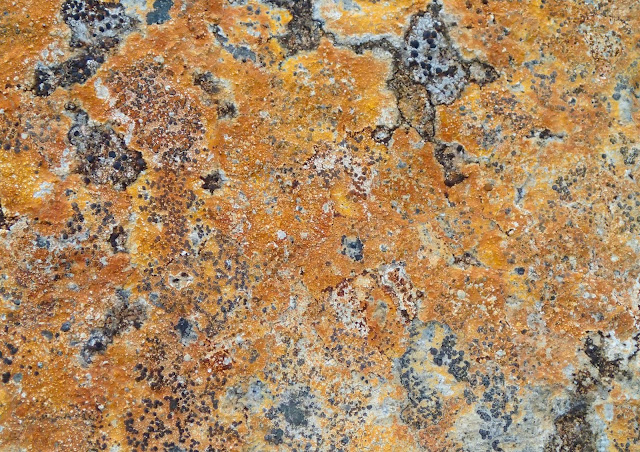 Much more colourful was a large granite boulder covered in orange lichen - quite beautiful in it's own way. 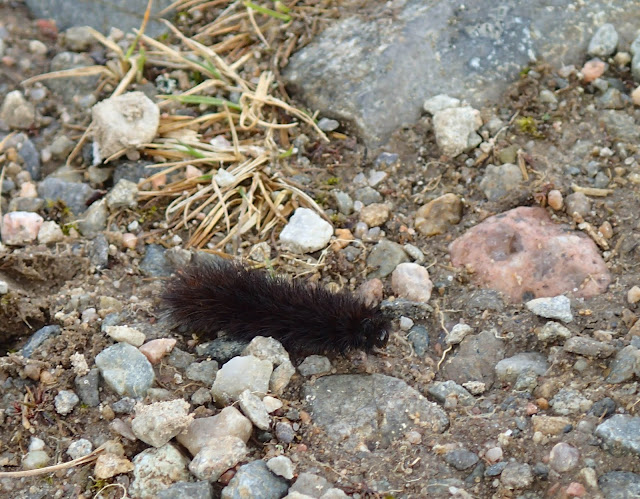 At our feet we noticed a number of dark brown or black hairy caterpillars crossing the path.  I've not been able to identify the species - so if anyone knows what type of caterpillar this is please let me know! 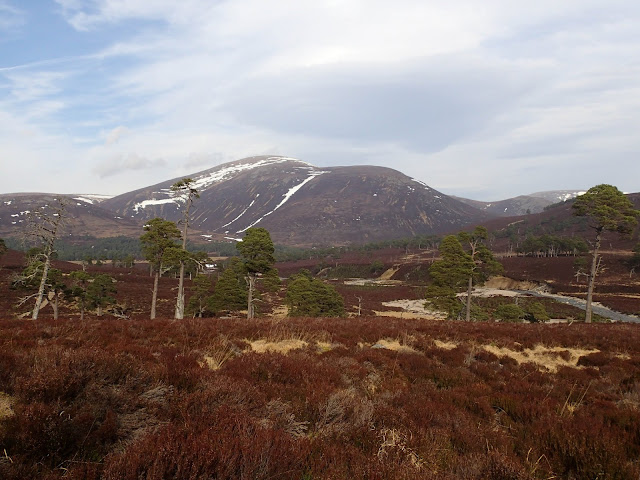 As hazy sunshine began to break through we looked up to a great view.  Across upper Glen Quoich the southern spurs of the sprawling Ben a' Bhuird dominate the view. We sat and "brewed up" tea, enjoying both the view and the warmth of sunshine on our backs. 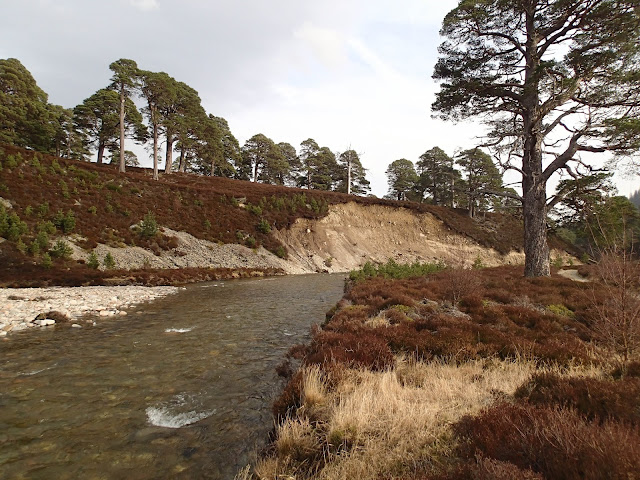 We kept close to the Quoich Water on our way back down the glen.  Flowing off hills of granite rocks, it's a clear lively river.  As can be seen by the landslip on the bank in this image, it's also a dynamic river which thrashes around in times of spate. 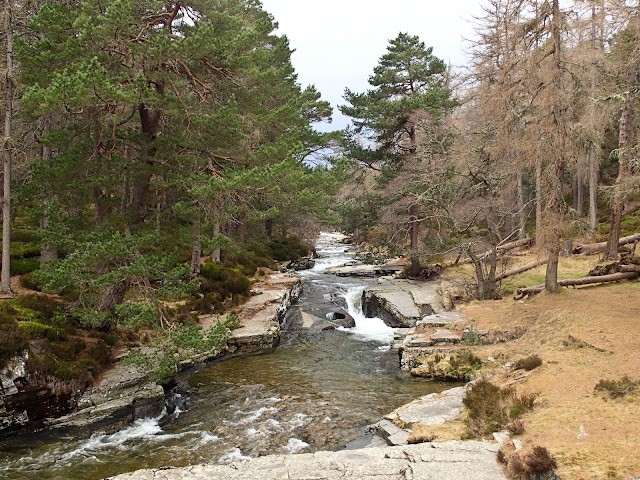 Near to where the Quoich flows into the River Dee is a favourite spot of ours. A series of small falls are formed where the river drops over shelves of rock.  One of these rock shelves has a waterworn hollow known as the Earl of Mar's Punchbowl.  Local legend has it that the Earl of Mar had this hollow filled with punch during a hunting trip to toast the Jacobite cause in 1715.  He'd be disappointed today though as one side of the hollow is worn through allowing water to pour out. 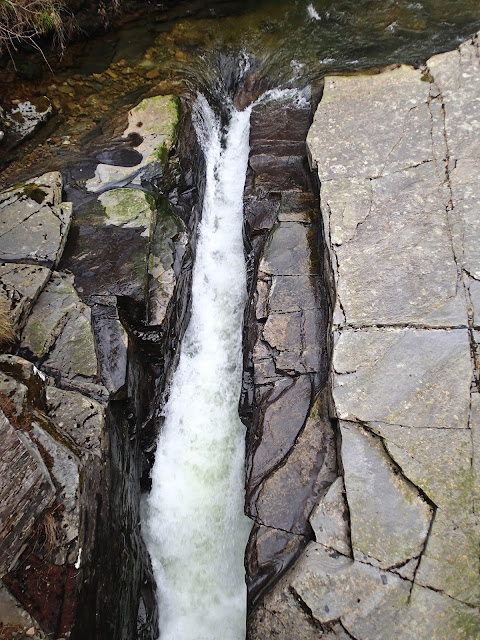 Below the Punchbowl a wooden bridge crosses over the river above the Linn of Quoich (a Linn is a narrow constricted channel) where the whole volume of the river roars onto a narrow gorge.  In spate this can be a fearsome sight. 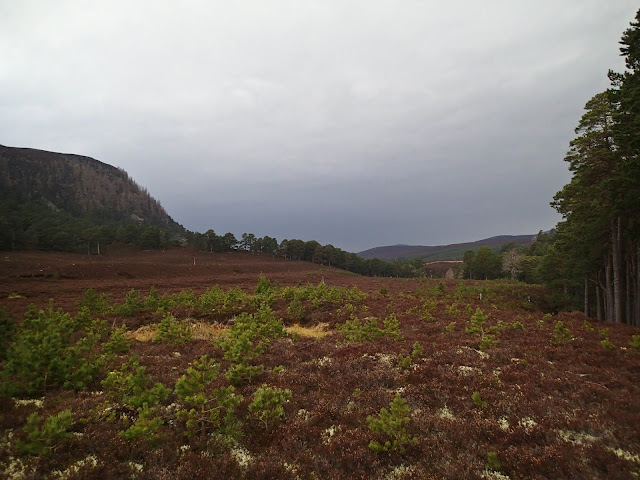 Walking back up from the Linn of Quoich we looked back up the glen to see that a dark bank of cloud had obscured any sun.  The forecast was for afternoon rain and it looked like the forecast was absolutely accurate! 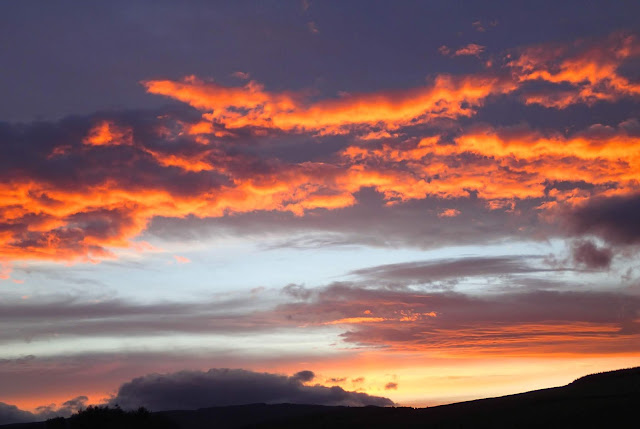 The rain passed through during the afternoon, and back at home we were treated to a fine show as the sun set.  It had been a very pleasant winter day.....
Posted by Ian Johnston at 20:59 2 comments:

A hint of the Spring to come

A run of remarkably mild and sunny days in the north east of Scotland has brought a hint of Spring, in mid-February; and nature has responded.  Birdsong increased noticeably, where there had just been Robins singing they've been joined by Great and Blue Tits, and yesterday a Thrush belting out song from the top of a Birch tree. 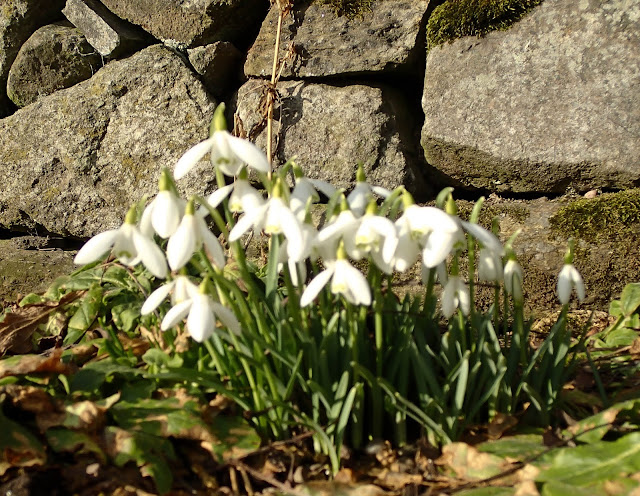 The flowers have responded to some warmth too - Snowdrops (Galanthus nivalis) usually flower in February but have fully opened their flowers in the sunshine. 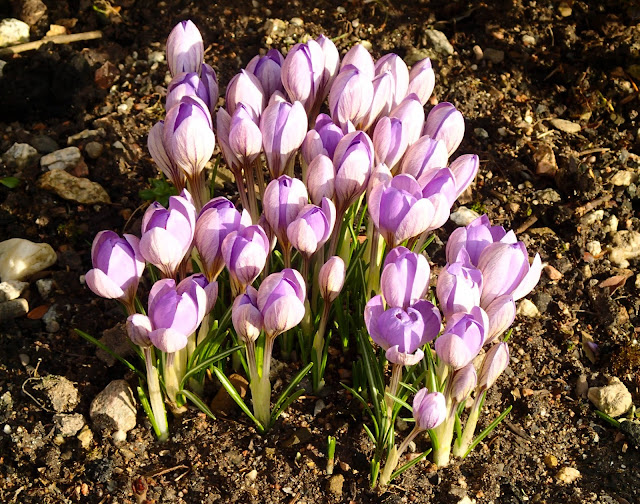 The Crocuses in a small flower bed next to a south facing wall visibly grew over two days, a couple of weeks earlier than expected they're much more a Spring flower than a winter one! 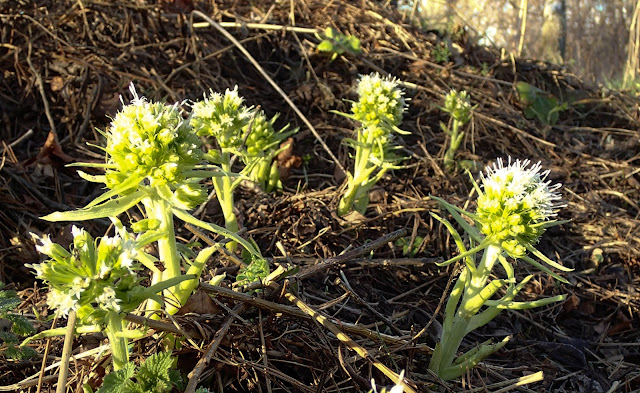 On a walk by the lower reaches of the River Spey, a sunny and sheltered spot in a wood was full ofa plant which seemed familiar, but not completely so.  We have Butterbur (Petasites hybridus) growing near to home and this was similar but somehow different. 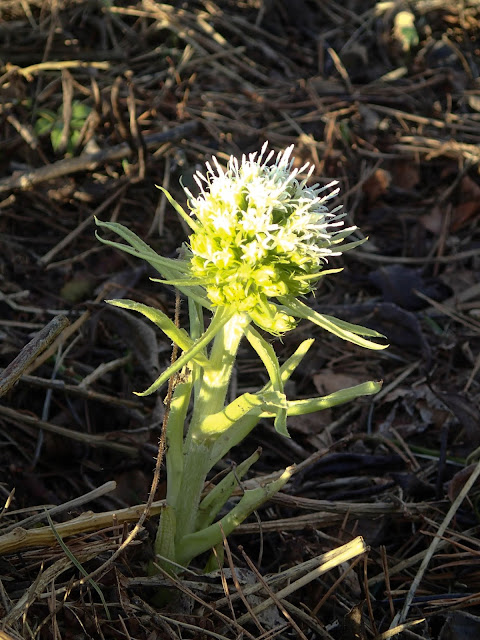 A bit of research revelaed that the plants are White Butterbur (Petasites albus), a non-native variant introduced to Britain in 1683 from southern Europe.  It apparently thrives along watercourses in the north east of Scotland and can be invasive as it spreads via underground rhizomes and can out-compete other species.

There's no doubt more of winter to come, but it was certainly good to feel a hint of the coming Spring!

A gem of a winter day at Loch Muick 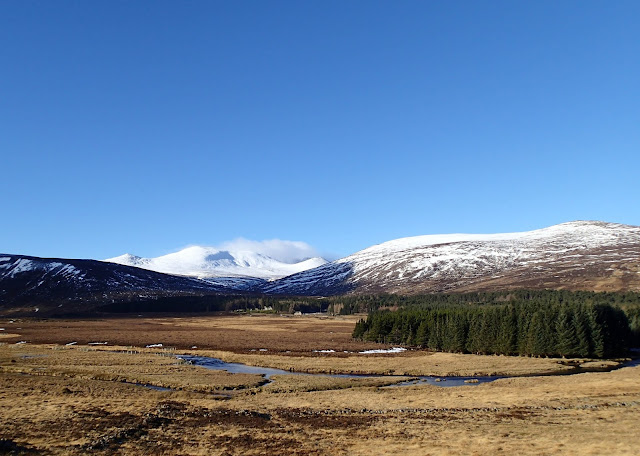 After Storm Erik had swept across Scotland there was a day of rare winter perfection; cold but not frigid, clear blue skies and crisp winter sunshine.  We decided to take a walk at Spittal of Glenmuick and drove the short distance from home through Ballater and up the single track road to the head of the glen.

Just as you approach the car park at the end of the road there's a great view across to Lochnagar, which was looking very fine under a full cover of snow. 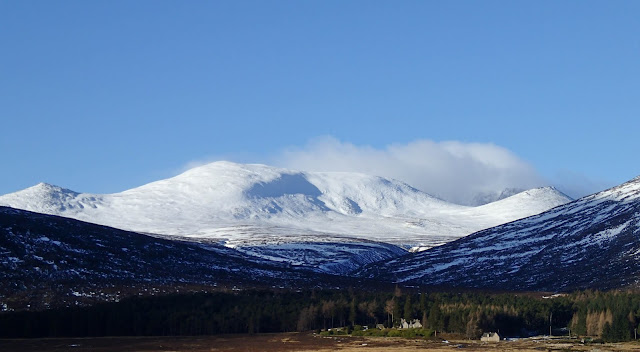 You don't get to see all of Lochnagar from this angle though, the great corrie which is the defining feature of the mountain is hidden behind the upper slopes.  A cloud cap was streaming over the western arm of the corrie and then dissipating into the clear sky. 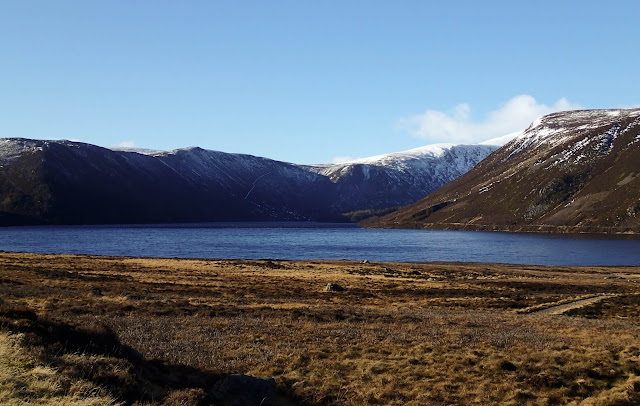 The term "Spittal" indicates the site of a medieval staging point for travellers on the drove road between Deeside and Glen Clova - termed as a hospital or hospice but having the meaning of a shelter from wolves and robbers.  There are some fascinating remains of quite a sizeable township, described on the Canmore site record.

The end of the road is a car park owned by Balmoral estate - there's a charge for parking which was originally quite reasonable but is creeping rapidly up - £4 per car currently.  There's also a small but very interesting visitor centre in a former cottage and some public toilets.

We'd originally intended to walk around Loch Muick but noticed an information poster indicating that a bridge over a large burn near the head of the loch has been washed away.   There would be no easy crossing of the burn so we decided to walk out along the west side of the loch and return the same way.  The loch is a real glacial feature, wild and surrounded by steep hills for most of its length.  Although a level, loch-side walk it needs to be remembered that Loch Muick is at 400 metres/1300 feet and can experience ferocious weather.  On this day, in the winter sunshine it was a stunning blue jewel among the muted winter hills and a perfect foil for the sky. 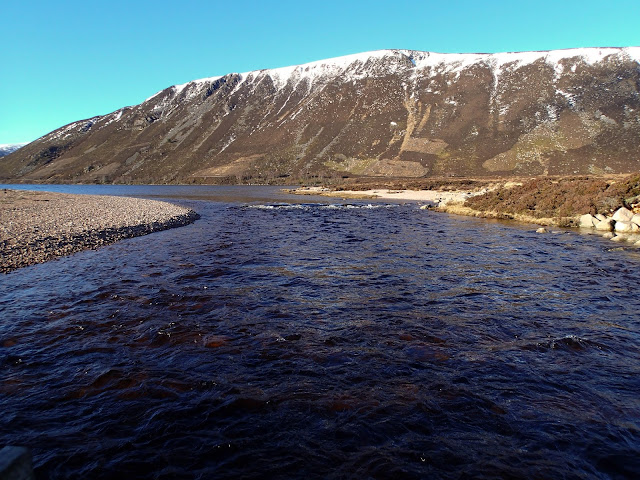 The River Muick drains from the end of the loch and flows north to eventually join the Dee near Ballater.  A dark brown yet not peaty, I've always found the Muick an interesting river - it starts sluggish and meandering and picks up speed well below the loch, tumbling and surging down a gorge to join the Dee - almost the reverse of most rivers. 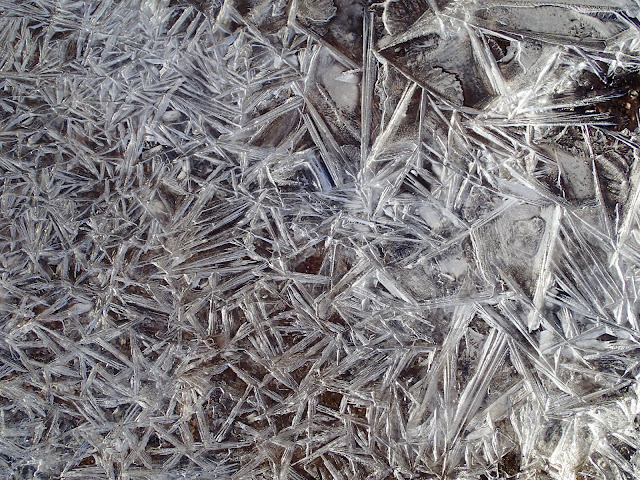 Along the path every bit of moisture had been frozen hard, there were smears of hard grey ice and puddles crazed with beautiful crystal patterns. 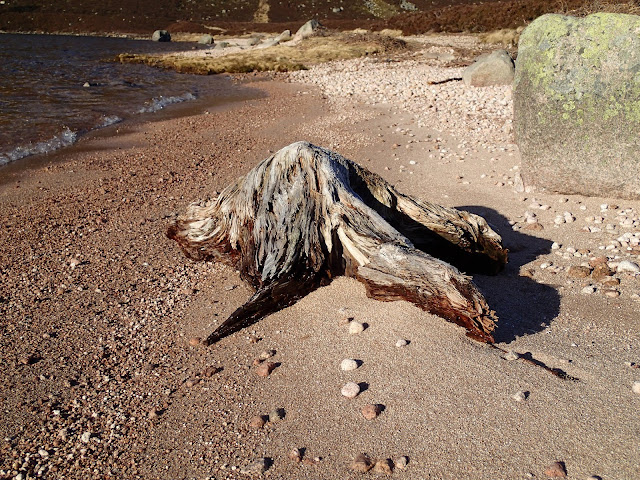 On the warm coloured granite sand at the end of the loch there are signs that this was once a well wooded area - historic climate change and changes in land use have left it mainly bare, though the trees are beginining to return along the loch with help from the estate in fencing and reducing deer numbers.  Fifty years from now there should once again be a natural wood all along one side of the loch, extending up the slopes. 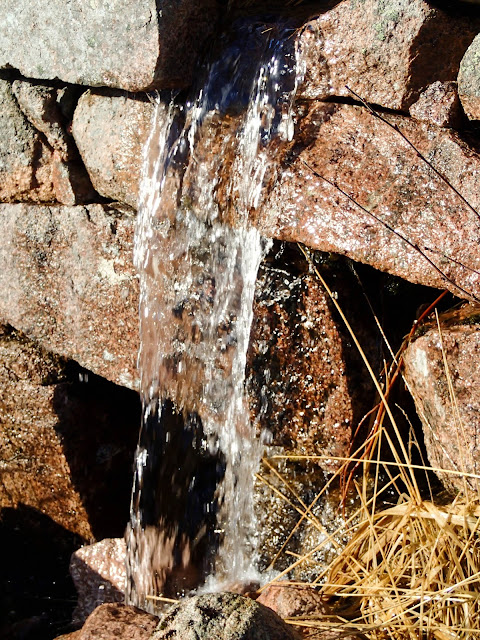 The track along the west side of Loch Muick is built to a very high standard with drainage ditches and retaining walls of pink granite blocks.  This was built to service a quite remarkable building and one which is quite unexpected..... 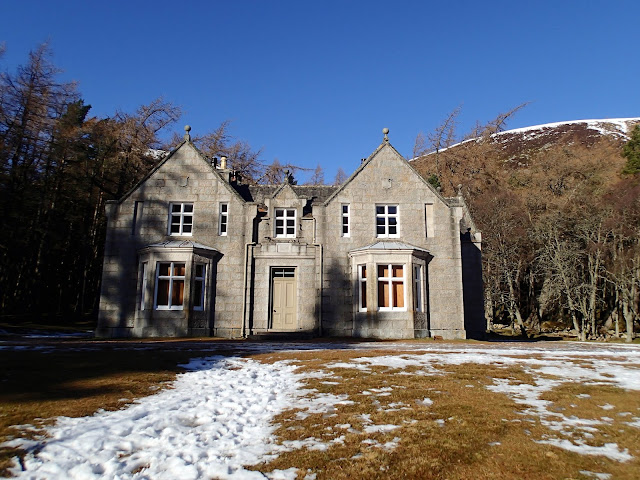 Glas-Allt Shiel was built on the site of a much smaller cottage for Queen Victoria who loved the place for its remoteness and peace.  Built after the death of Prince Albert, she seems to have preferred it because there were no associations with her late husband - she found Balmoral and the small hideaway of Allt-na Guibhsach too full of memories.  The name is taken from the burn which rushes  down off Lochnagar and into the loch - the Glas Allt (grey water)

Still owned and occasionally used by the Royal family, this is perhaps one of the best situated of all the great lodges.  At the rear, an outbuilding is an open bothy cared for by Dundee University and the Mountain Bothies Association. 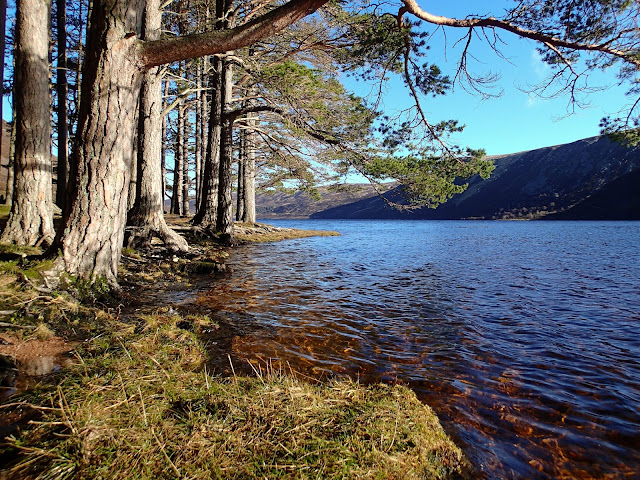 We found a sheltered spot by the loch side in the wood surrounding the lodge and spent a pleasant half hour in the sunshine eating lunch - there was even some warmth in the February sun.  We left reluctantly; Victoria was right about the peaceful setting of Glas-Allt Shiel. 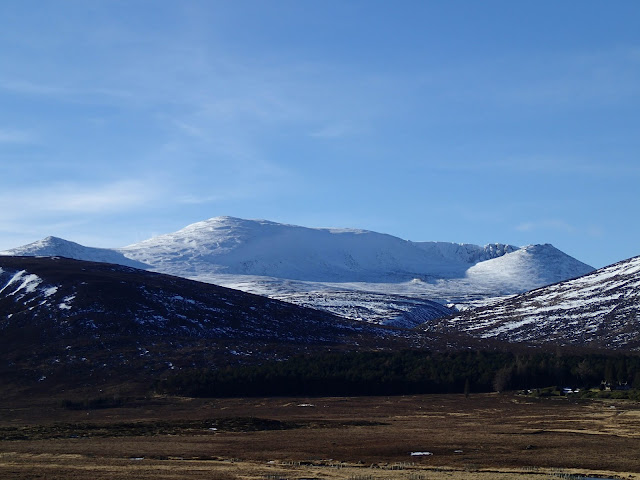 We strolled the 6km back to Spittal of Glenmuick in alternating cold winds and warm sunshine, the wind beginning to pour down from the higher ground.  From the car park we could see that the morning cloud had burned away to reveal the edge of Lochnagar's corrie - it had been a gem of a winter day.