A celebration on "Mica Beach" 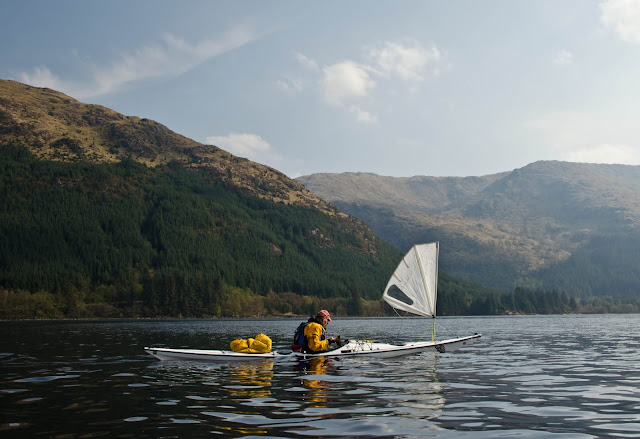 By the time we'd paddled about half way down Loch Shiel and the mountains had begun to recede on either side, the wind had dropped to a very light breeze.  It was still an assistance though and we would eventually cover the length of the loch at an average 7km/h despite taking plenty of time to dawdle and enjoy the situation. 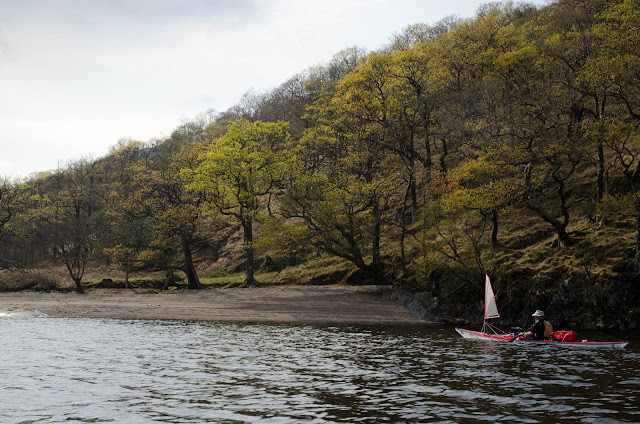 Second luncheon was on the horizon and we pulled over to the west side of the loch to land at a beach we've passed previously but not landed on.  Stark when we saw it in winter conditions, it seemed a lot more welcoming with fresh green spring leaves opening and birdsong echoing across the hillside. 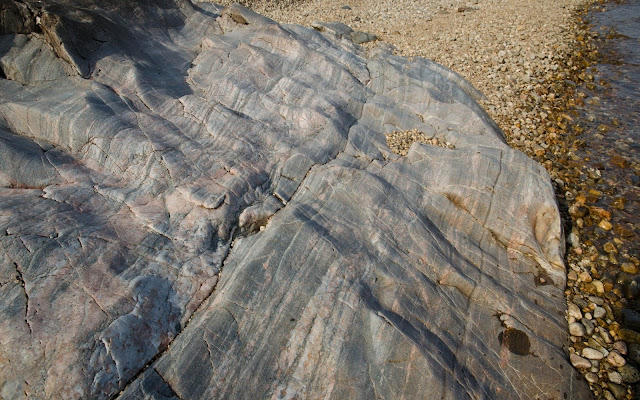 The glacial nature of the landscape is obvious in the ice-polished rock on the shore.  The geology in this area is quite complex, this looks to be a metamorphic rock type.  Among the pebbles on the beach we found some pieces of mica which were incredibly bright - almost mirror-like in their shine.  We'll know this place as Mica Beach on future trips. 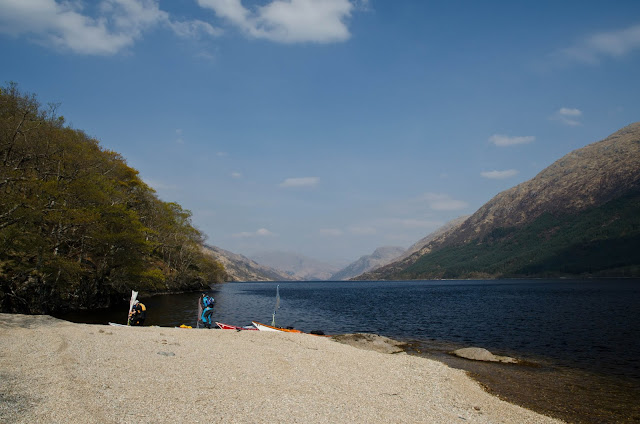 The view back up Loch Shiel was very fine, bright blue water framed by steep hillsides clothed in green and backed by a mountain skyline. 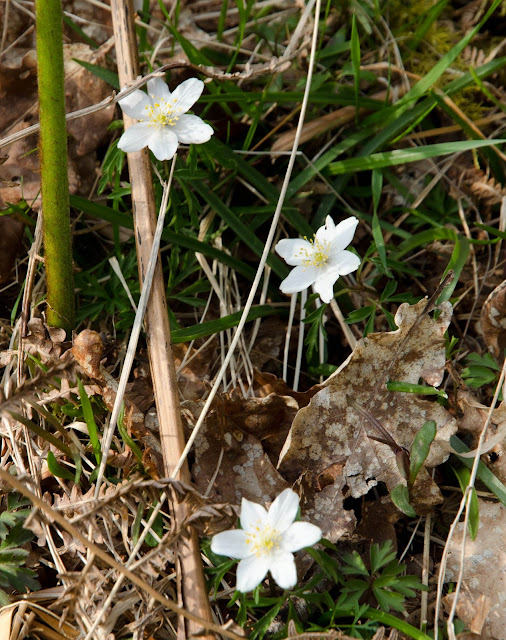 Closer to hand, the spring flowers were in evidence on a grassy bank above the beach, the beautiful flowers of Wood Anenome (Anenome nemorsa) studded the undergrowth; a welcome sight. Another welcome sight was a small libation of Caol Ila malt whisky, dispensed from Douglas' flask - for we had something to celebrate..... 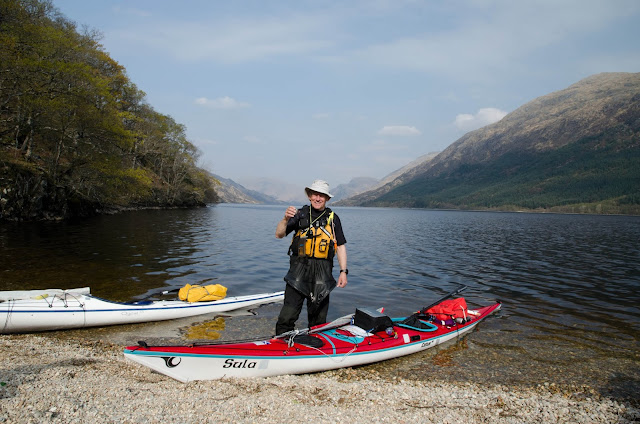 .....the first day on the water for Douglas' new P & H Cetus MV kayak.  As we were marking h=the vent on fresh water, we would of course have to hold another launch ceremony when "Sula" first felt salt water!
Posted by Ian Johnston at 21:18 No comments: 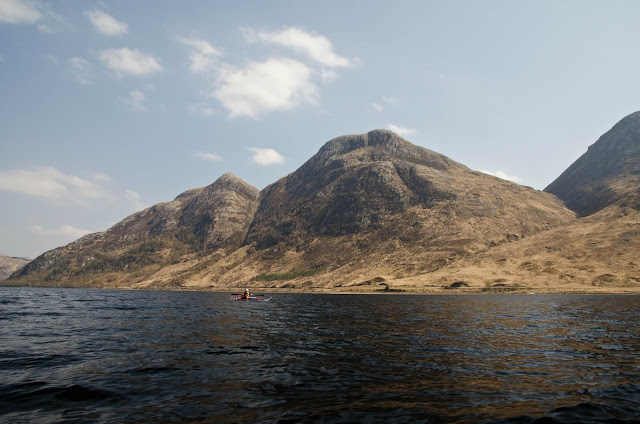 The head of Loch Shiel is among rugged mountains which enclose Glenfinnan and line both sides of the loch.  You get a feeling of being in a fjiord, and this is exactly what the loch was, a glacial trench carved out by ice which originally connected to the sea at Loch Moidart.  The uplifting of the land of the western seaboard of Scotland following glacial melt (isostatic rebound) has raised the outflow of Loch Shiel by some 5 metres capturing the water and it's now a freshwater loch. 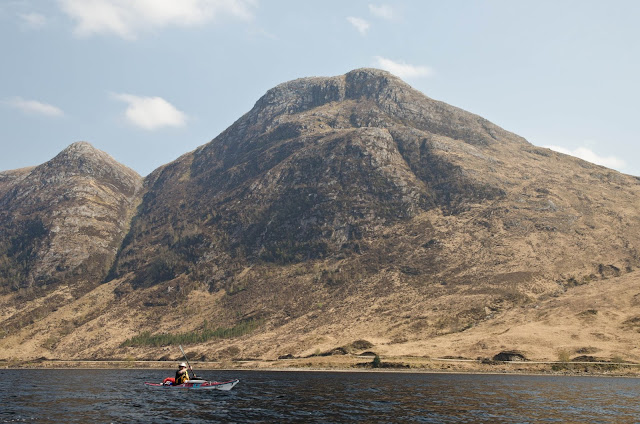 Paddling away from Glenfinan, the mountains get more impressive; tough and rocky hills with bvious signs of ice scouring and plucking.  None of the hills on either side of the loch top the magical 3000 ft/914 m contour which would confer Munro status - though there are some very fine Corbetts (hills between 2500 and 300ft).  The result is that these tend to be much less frequented than other hills - and are further defended by difficulty of access.  Until quite recently there were no roads on either side of the loch but there's now a forest track on the east shore for timber extraction. 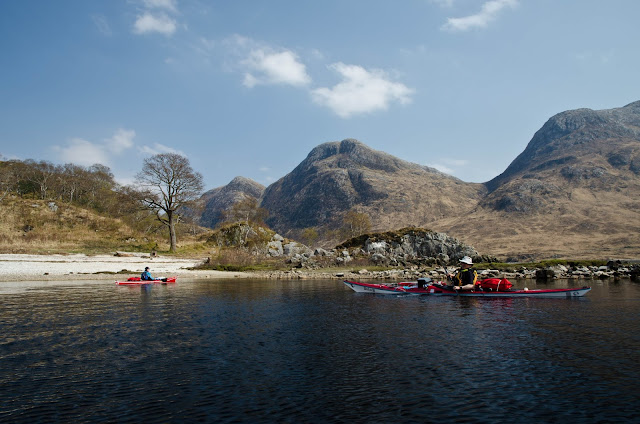 After a few kilometres of paddling we pulled around a corner to an idyllic beach of pale sand sheltered in a small bay.  We have used this beach each time we've paddled the loch; for second breakfasts and for the inevitable readjustment of packing to trim the kayaks at the start of a trip.  Douglas also took the opportunity to adjust the rigging on Lorna's sail. 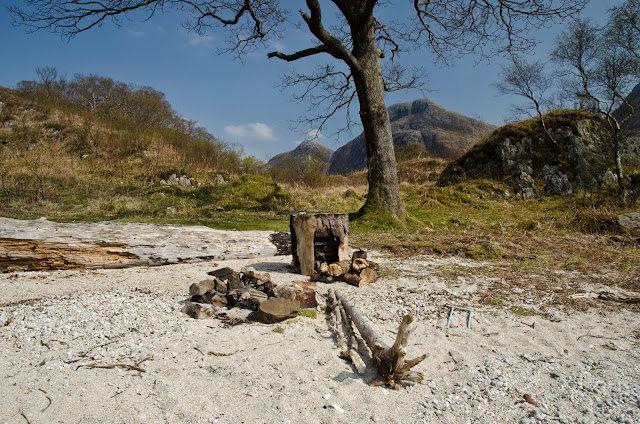 This beach is a very popular camp site for open canoeists - and there were a supply of logs laid up under a carved tree stump with a prepared fire ring - which was at least off the grass and in a place where higher loch levels would wash it away.  While this beach is probably a couple of hours paddling for an open canoe and therefore a logical first camp on a journey, the camp site we planned was some 18 kilometres further down the loch so we didn't linger long after lunch..... 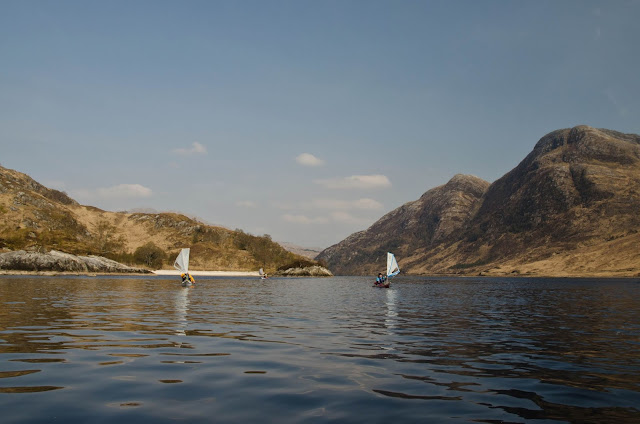 ...and were soon on our way again with a light breeze behind us and the sun warm on our faces. 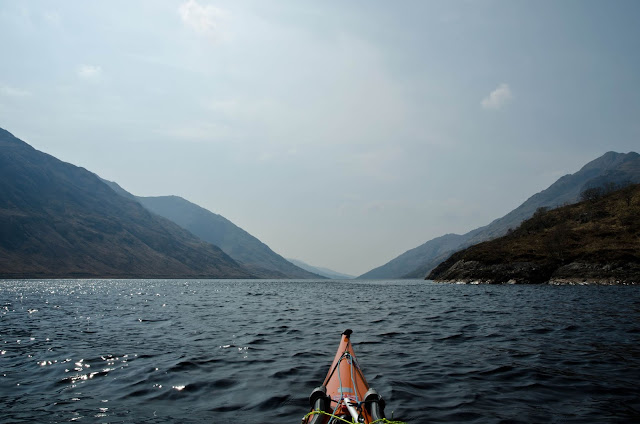 Ahead, the length of Loch Shiel beckoned - and once again we subconsciously moved out into the middle of the loch to align with the convergence point in the far distance, something which has happened on each occasion we've paddled here. 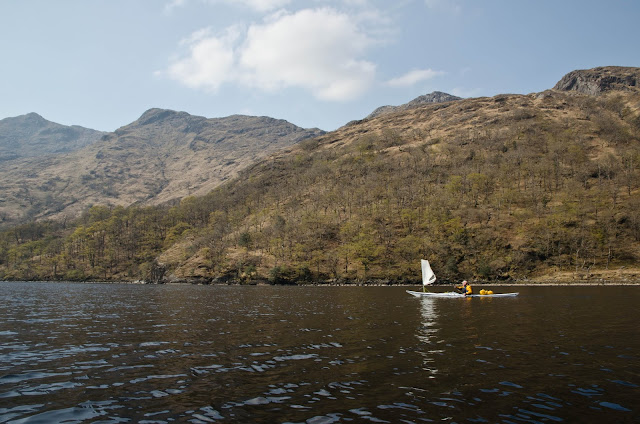 With the sun beaming down on us and the fresh green of new leaves beginning to open in the woods on the west shore, it really felt that Spring had arrived.
Posted by Ian Johnston at 20:54 2 comments:

A warm welcome at Glenfinnan 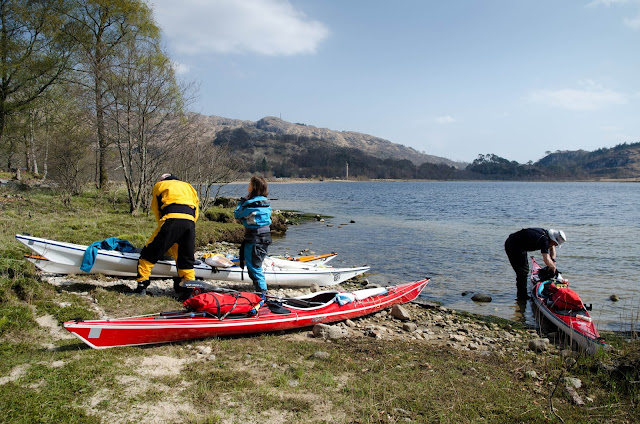 In the week leading up to Easter, Allan, Lorna, Douglas and I rendezvoused at Glenfinnan by the head of Loch Shiel.  Under a pale blue sky there was warm sunshine....unremarkable enough except that for the previous two weeks Scotland had been under bitterly cold easterly airflows with low single digit Celsius temperatures.  A change in the source of the airstream across the country had been well forecast - but none of us really believed it until we stepped from our vehicles into 20 C sunshine! 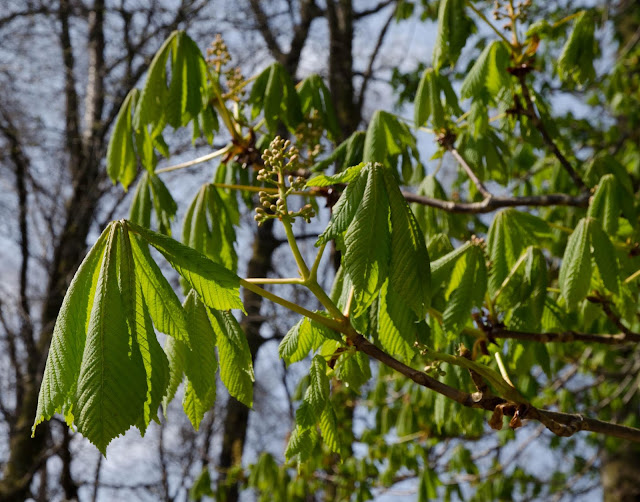 We planned a journey down Loch Shiel to the sea, then along the Moidart coast.  It's a journey we've done previously a couple of times but Allan had missed out due to illness - all the more reason to do it again!  Our last journey down the long length of freshwater Loch Shiel had been in October 2016 when Douglas, Lorna and I had enjoyed a superb display of autumn colours.  On that occasion we'd rustled through the fallen leaves and "conkers" of a big Horse Chestnut tree to get to the launch, on this occasion the leaves of the same tree were just opening - the wheel of the seasons turning.

We ran two of our vehicles to our expected finishing point and had arranged to park one at the Glenfinnan House hotel for a very reasonable parking charge.  If you do this trip - please make sure to check in advance as we did that there will be space to leave a car; the available spaces are restricted and hotel guests will obviously have priority.  The hotel staff told us of a group of Open Canoeists who had arrived without warning, half filled the car park then returned and left without paying - on a holiday weekend when the hotel was full to capacity. 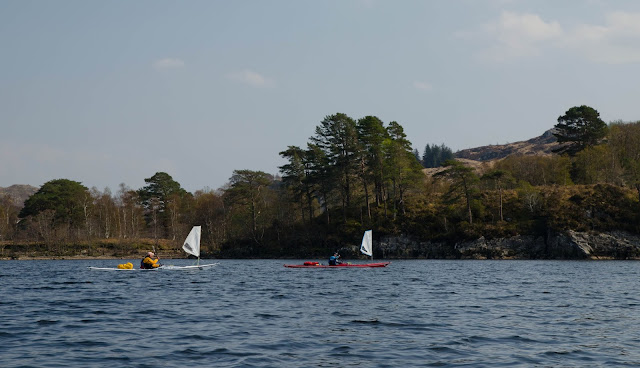 We were soon on the water in a light breeze which gave Allan and Lorna a chance to accustom themselves to sea kayak sailing - for Lorna this was the first time and Douglas had in fact fitted her boat for a sail in the car park immediately before we got on the water! 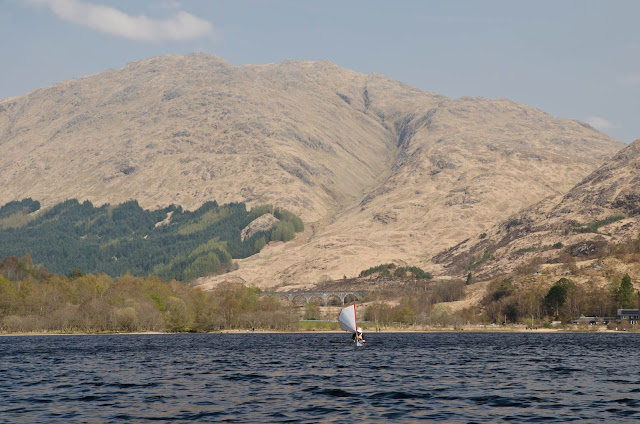 The pal ochre colours on the hills behind Glenfinnan were definitely still those of early Spring, but the temperatures spoke of summer - it was so good to be back out on the water. 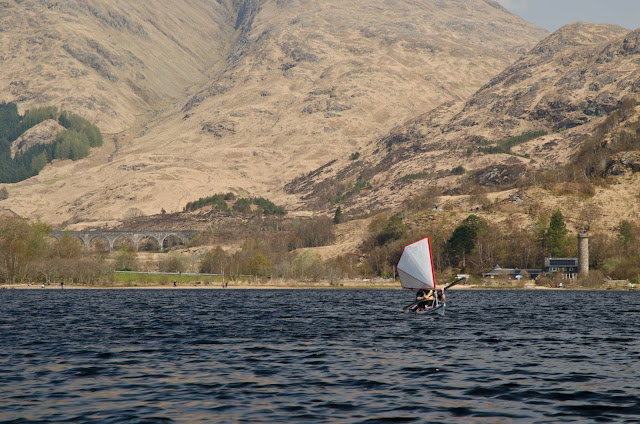 At the head of the loch you can see the two main attractions of Glenfinnan; the railway viaduct and the memorial to the ill-fated 1745 Jacobite rebellion.  The monument used to be the main draw for visitors to Glenfinnan, with the railway viaduct of interest mainly to enthusiasts of railways and concrete construction; it was completed in 1898 of the then new-fangled wonder material by Robert McAlpine who earned the nickname "Concrete Bob".

All this changed with the appearance of a certain Boy Wizard.  The second and third Harry Potter films featured Glenfinnan viaduct and the "Jacobite" steam train as it took Harry and friends to and from Hogwarts.  The explosion in tourism which followed has been nothing short of remarkable.  Traffic congestion is now a daily event and despite a second car park being constructed to accommodate visitors, both are invariably full with cars parked in all sorts of "interesting" places. 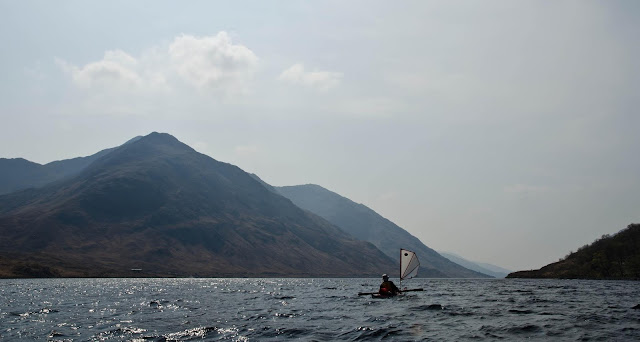 But the Harry Potter lookalikes and the sound of the traffic were left behind as soon as we headed out into Loch Shiel.  Fresh water under our hulls, miles of empty country ahead of us and the sun beaming down....we were off on our own adventures again!
Posted by Ian Johnston at 21:01 2 comments:

Backs to the wind above the Don

A catch up post from late March, when a run of bitterly cold northwesterly winds was established over the north east of Scotland.  Allan and I looked for a half day hillwalk which could accommodate the weather - we didn't intend to walk against a freezing 50mph gale! 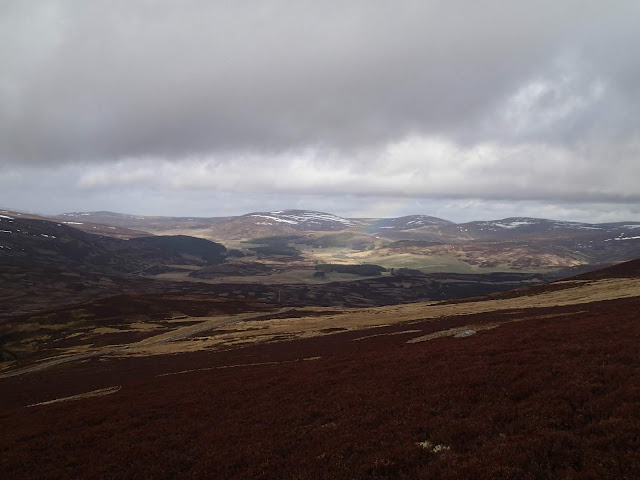 We chose the Mona Gowan ridge as we'd be able to use two cars and make a linear walk with the wind at our backs.  It's a hill I've climbed previously and enjoyed; this would be a different route for me.  At 749m/2457ft, Mona Gowan itself is a Graham and there are a couple of other smaller summits along the ridge. 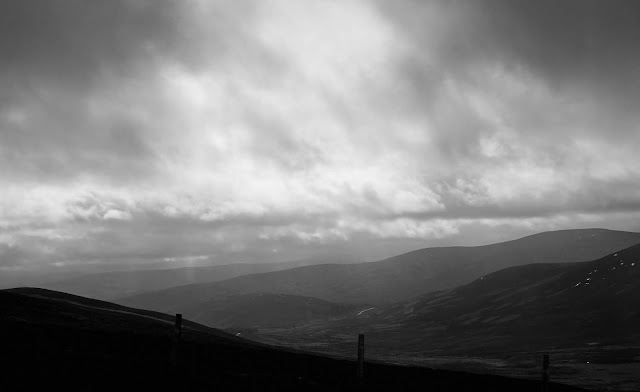 From the west there are a couple of logical starting points, one on the summit of the old military road (now the A939, but don't expect a "proper" main road!)connecting Donside with Gairnshiel.  A long layby on the east side of the road has some granite steps which lead up to a scratch  of path climbing to the summit of Scraulac.

We were glad of the hill's relative lack of height as the wind was both strong and chilling with a cloudbase just a hundred or so metres overhead.  We put our backs to the wind and plodded on up to the ridge. 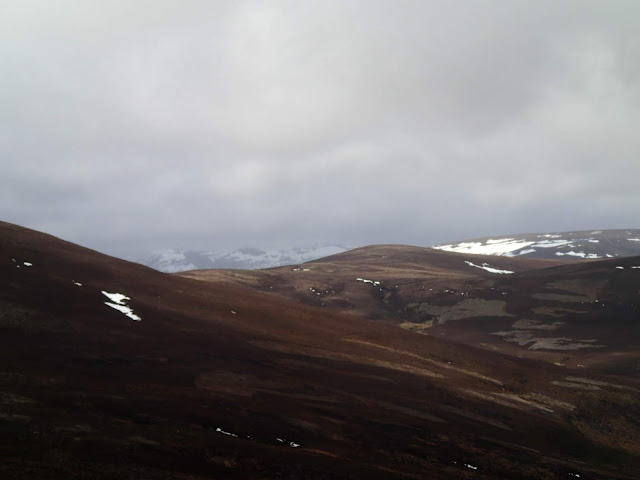 The weather forecast had indicated the passage of a cold front during the day.  We thought we might mange to complete our walk before this crossed the area, but it seemed that we'd be right in the firing line as ominous grey sheets of  rain built to the west. 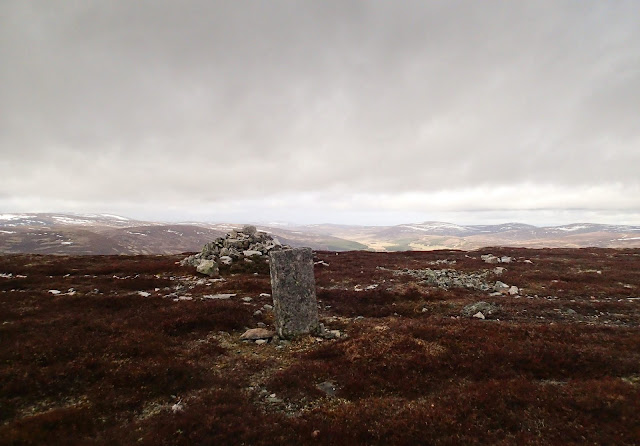 The summit of Scraulac came easily enough and we remained just below the scudding cloudbase.  I think this name translates as "scree place", and there's certainly some marble type scree here which is relatively uncommon in the granite dominated local rocks.  An estate boundary marker adjoins the cairn - I think it marks the boundary between Candacraig and Invercauld estates. 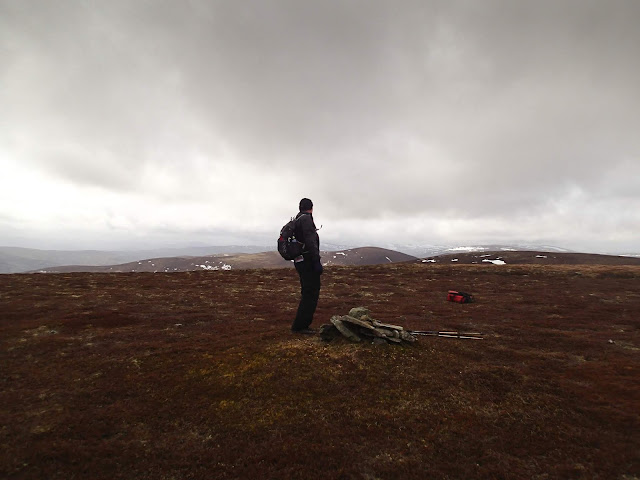 The walk from Scraulac to the next bump on the ridge, Craignagour Hill, gives great going on clipped heather - it's the type of terrain found on many areas of high ground in the area and can allow really long distances to be reeled off. There's a nice feeling of being on a broad rooftop on this walk as the ridge is separated from higher ground by distance and so gives really spacious views. 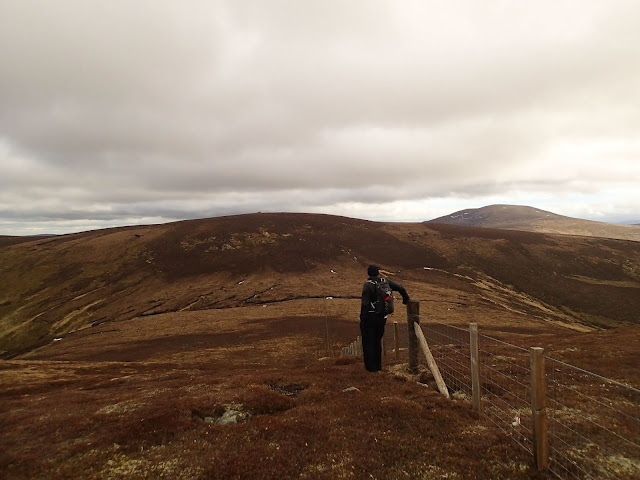 Continuing east there's a dip to a peaty bealach before a short climb up to Mona Gowan; a fence gives a useful guide down to this bealach in poor visibility. 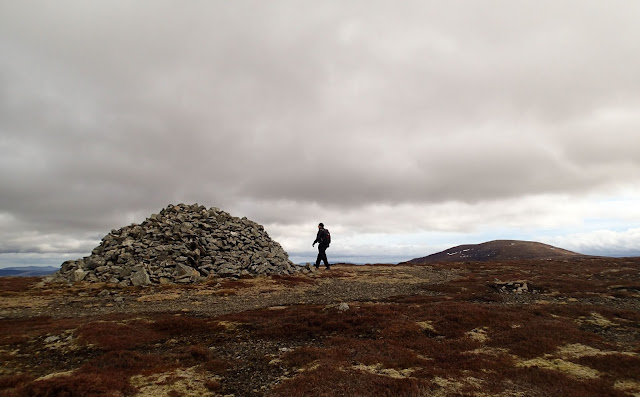 The cairn on the 749m summit of Mona Gowan is huge and visible for many miles - it was erected in 1887 to mark the jubilee year of Queen Victoria's reign. 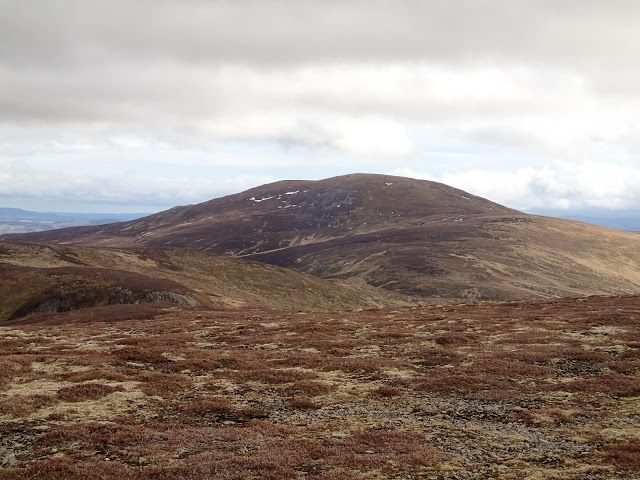 Allan and I ate lunch in the lee of the cairn which gave good shelter from the biting wind.  the view to the south east is dominated by Morven (big hill), a prominent landmark across much of this part of Aberdeenshire.

The weather caught up with us as we descended north from Mona Gowan, if anything the wind increased and there was a spell of quite heavy rain.  I took no pictures as we hurried down to the shelter of the forest above Culfork on the River Don. 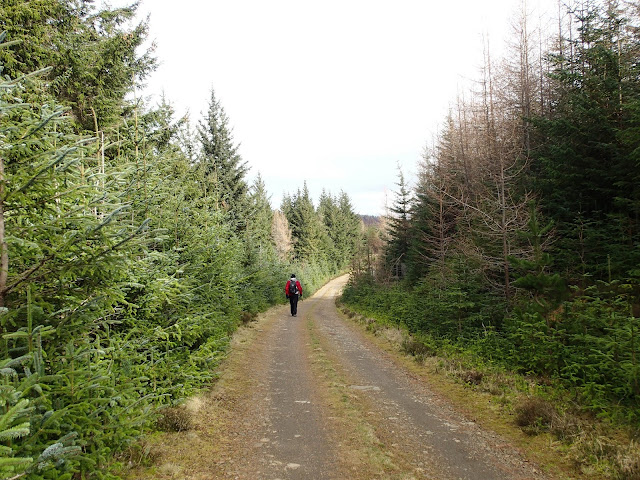 The rain stopped just as we reached the forest track and we sat to have a cup of tea before walking down the pleasant couple of kilometres to Culfork where we'd left a car.  Our route was quite short at approximately 10 kilometres but had given a good walk from unpromising weather. 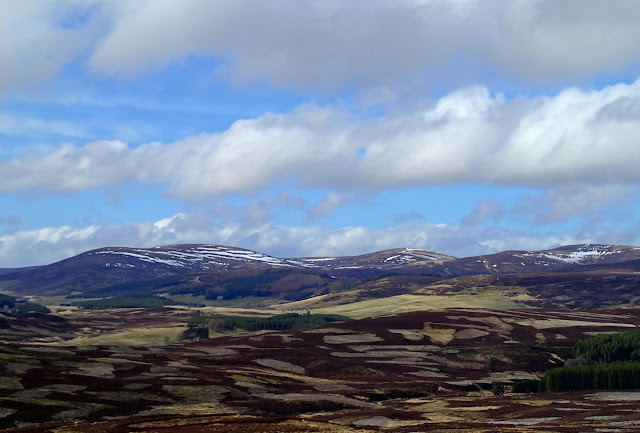 As we recovered a car from the start, the weather was already clearing after the cold front passage....but the wind certainly wasn't any warmer!
Posted by Ian Johnston at 10:24 2 comments: