At a time when farmers are having a tough time with rising input costs, pressure on farm-gate prices and huge political uncertainty, it's really uplifting to see a farm reaching out and engaging with the local community.

We visited Boghead Farm near the village of Lumsden in Aberdeenshire for an open day which would feature their sheep at lambing time. 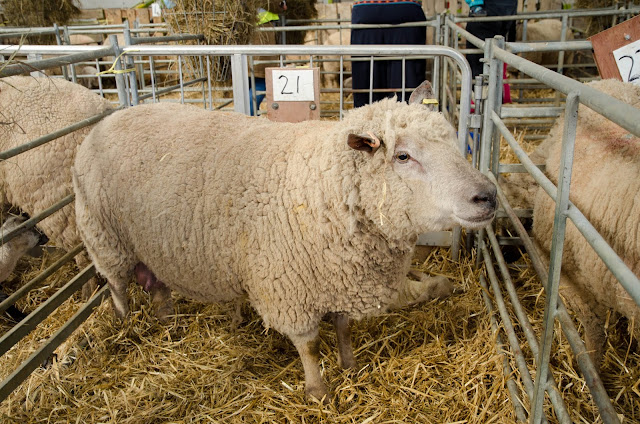 The Jacksons have around 150 Vendeen ewes in their flock - a breed I wasn't familiar with and which was only introduced to the UK from France in 1981.  A stocky breed with thick fleece,Vendeen sheep are bred for lean meat and seem to do very well here in the north east of Scotland. 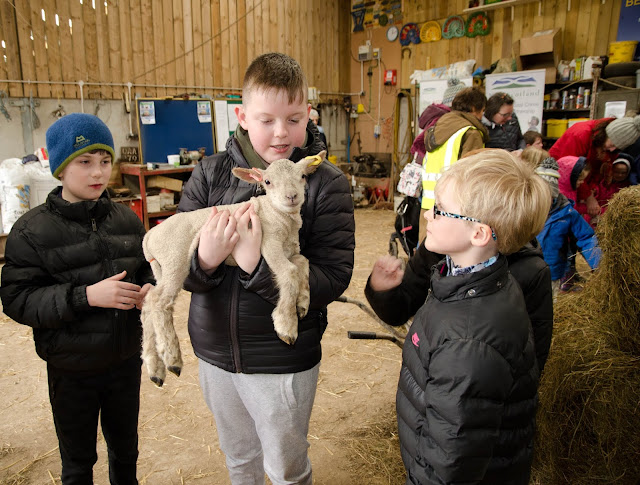 If you want to get children interested in farming and animal husbandry....this is how you do it!  Young visitors got to hold a lamb, to bottle feed some of them and to potentially watch the birth of new lambs. 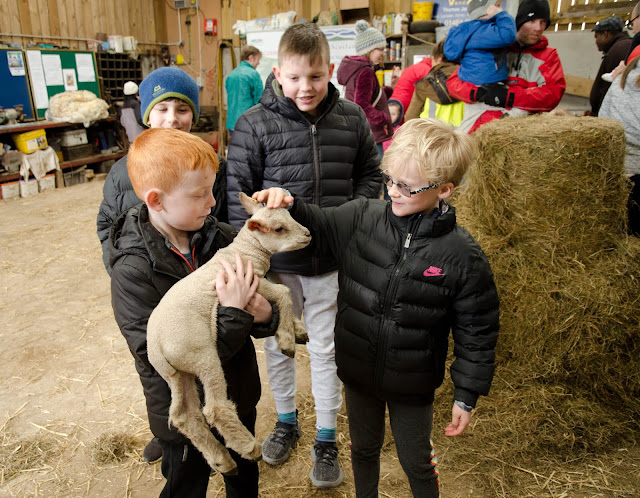 An interesting talk by Fiona Jackson introduced the breed, the lambing "maternity suite" and the lambing process.  Everything was explained clearly and without either patronising enquiring young minds or glossing over the purpose of breeding lambs. 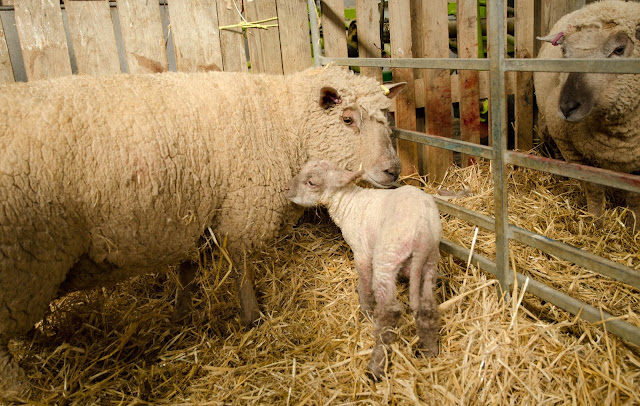 The ewes were remarkably tolerant of the audience of curious humans and didn't seem in the least put out by all the attention they were receiving. 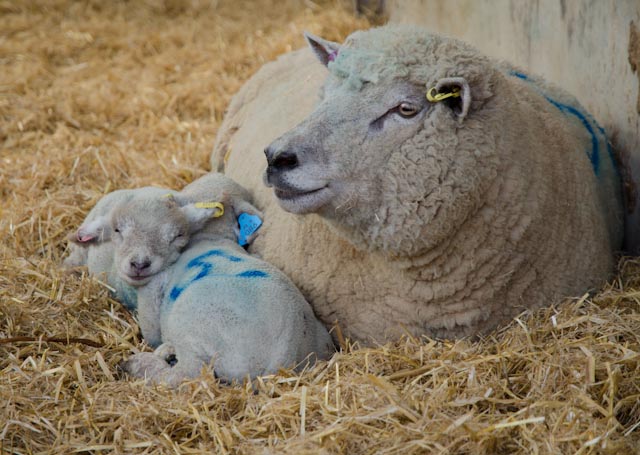 The lambs had a long day, for some it was just time to have a little nap......

We  also chatted with some of the helpers for the day from the North East Agricultural Society about farming in general, and admired the herd of pure bred Aberdeen Angus cattle which the Jacksons also have.  Originating from the nearby village of Alford, the "black beauties" can be found all over the world, and particularly in South America. 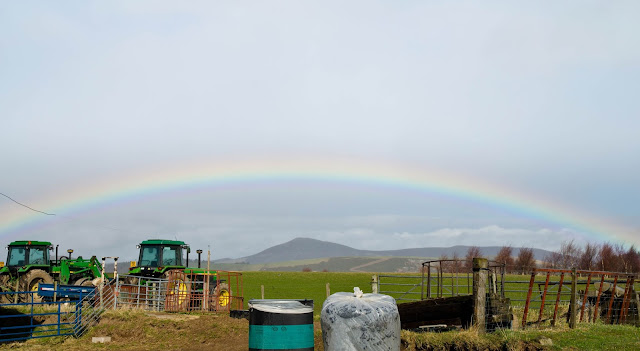 We enjoyed a really interesting visit to Boghead, our thanks to Thomas and Fiona Jackson for holding this open day.  Opening a farm to the public can never be a simple process - there's lots to consider.  Given the tragedy that befell the Jacksons in October 2018 when one of their cattle tested positive for a "spontaneous" case of BSE their decision to open up the farm is both courageous and a statement of hope for the future.  Fiona spoke movingly of the trauma of the whole situation and it was really good to see the farming community of North East Scotland supporting them on this open day.
Posted by Ian Johnston at 20:37 2 comments:

An outdoor company's designation of  "Approach shoe" can mean anything from an ultralight trainer style shoe to a semi rigid shoe almost suited to rock climbing.  A good pair of approach shoes (in my view) should sit somewhere between the two extremes and be suitable in a whole variety of situations They should offer day-long comfort, be reasonably hard wearing and offer good support without feeling rigid.

I've used Scarpa products for many years because they just seem to fit me well and although certainly not cheap the brand does make a quality product.  This review  is based on wearing the Moraine Plus GTX shoes for a full year.  Used daily for commuting and travel, they have also been worn on short walks, on long day walks at lower levels, around camp on sea kayak trips, for shopping, casual wear and just about everything else in between.  My original pair have just about got to the stage of being replaced - and I've purchased another pair of the Moraines. 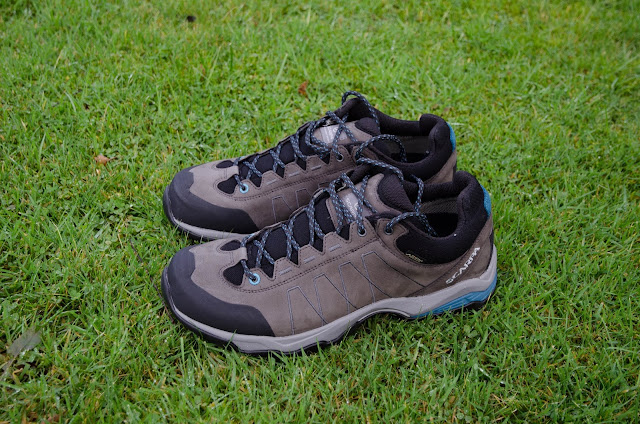 Up to 2019 the colour scheme was a smart grey with blue trim - the 2019 version is brown with an orange trim.  The uppers are 1.6mm Nubuck leather with a Goretex Extended Comfort membrane lining.  For comparison, the R-Evo GTX walking boot from the same company has a 1.8mm upper.  The weight of a UK size 8 (Euro 42) pair is 930 grams, so these shoes don't fall into the lightweight category, but neither do they seem particularly heavy.

Construction is up to Scarpa's usually high standard.  The midsole is bi-density EVA which gives a good mix of shock absorption and support.  Straight from the box the shoes are comfortable and supportive.  Initially the heel strike feels quite firm but this isn't noticeable after a short time.  The walking action is nice and natural and I've experienced no discomfort or "hotspots" at all.  There's a TPU shank in the midsole under the central part of the foot for lateral support and this works very well - it can be seen clearly on airport X-Ray machines if you are required to remove the shoes at the security search area!

Perhaps the strongest point in favour of the Moraine Plus GTX is that I simply forget I'm wearing them.  They are comfortable even on long days and unlike some Goretex lined footwear I've not felt them to be over warm.  Within the limitations of a low-cut shoe they've also been waterproof; the only times I've experienced a wet foot is when water has come in at my ankle. 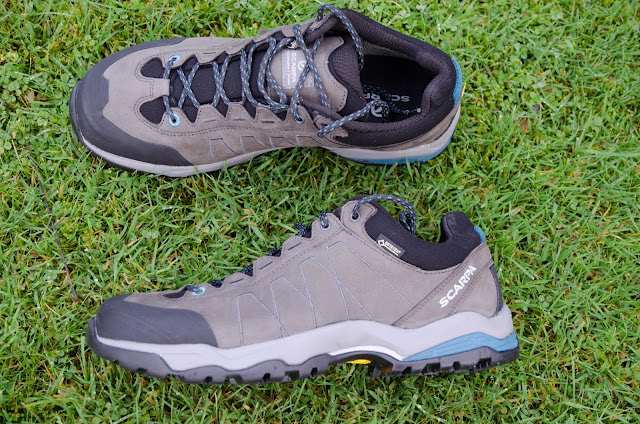 The style of the shoe is more substantial than a trainer and probably closer to a walking boot in design -in fact there's a mid height version available too.  The rubber rand at the toe does the job of protecting the Nubuck from bashes and scrapes.  The Vibram Dynatech 3 sole gives great grip on most surfaces (but be careful on shiny floors when they're brand new!) and the well defined heel breast is very effective when going down steep inclines.

After a years wear, I felt that it was time to replace my original pair of Moraines and after saving up a bit (see last paragraph!) I had no hesitation in purchasing another pair. 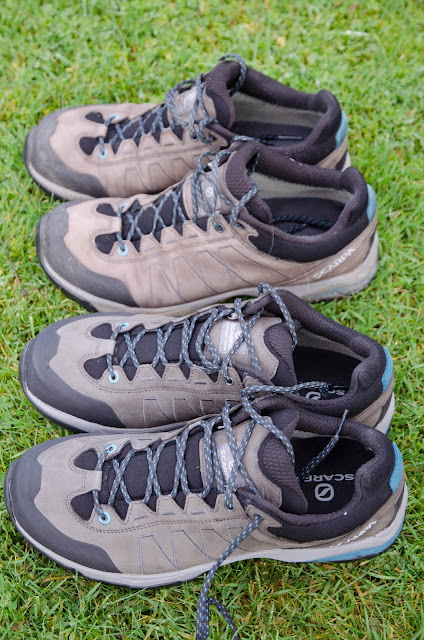 In this image the new pair are nearest the camera with the well-worn pair farthest away.  Some abrasion and fading on the uppers is obvious but the shoes certainly aren't damaged in any way - all stitching is intact and there isn't even any fraying on the laces. 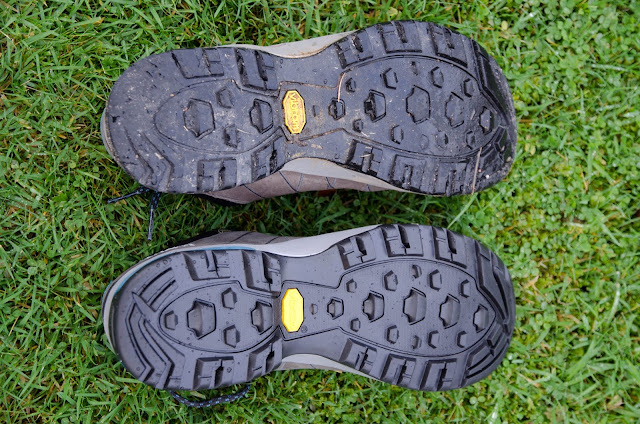 The soles have worn pretty well - I walk approximately 50km on a variety of terrain during a typical week (excluding any specific hillwalking) and the Moraines have been in daily use - so the wear shown here represents over 2500km of walking.  I wear the heel of my left foot more than any other part of a shoe due to my gait and (as expected) this has worn significantly; otherwise the level of wear is certainly not excessive. 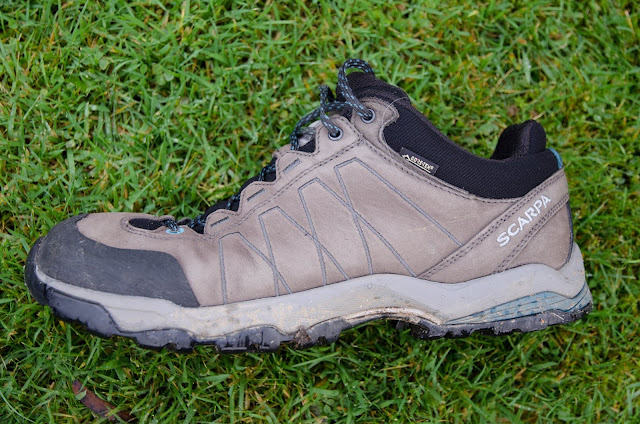 I've found the Scarpa Moraine Plus GTX to be a well-designed, quality approach shoe which is comfortable on a range of terrain.  They've lasted well - the old pair will be relegated to gardening and will probably still be going for a long time to come.

Retailing at £155 in the UK for the 2019 version, the Moraines are pitched as a premium product.  For me, the quality, performance and comfort of these shoes outweighs the high price.

Conflict of interest statement:  I purchased both pairs of shoes at retail price (less a small club discount) from a national outdoor equipment retailer and have no connection with Scarpa or the retailer apart from being a satisfied customer.
Posted by Ian Johnston at 20:50 11 comments: 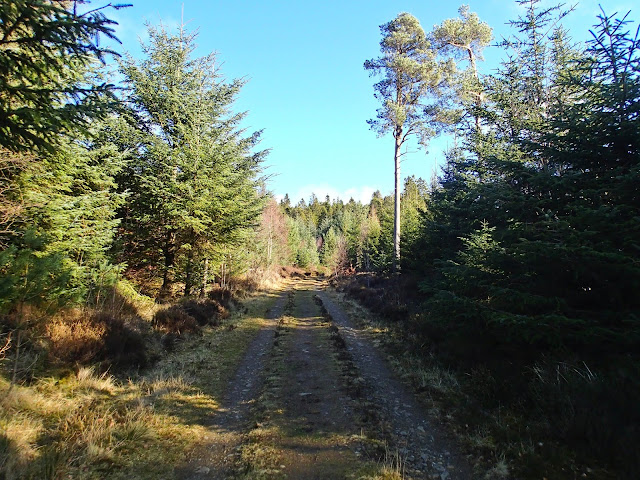 I've driven past the sign on the A96 road near Huntly which points to the Bin forest car park literally hundreds of times and yet not visited - feeling that a walk close to a busy road would be spoiled.  I'm pleased to say I was totally wrong.

On a really windy Sunday morning we parked and headed out on one of the waymarked trails which climbs steadily up through the forest. 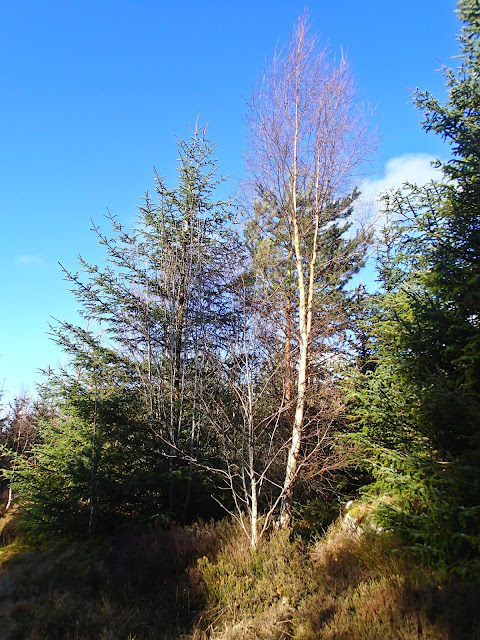 The Bin was originally planted for timber using seeds brought to Scotland by the great plant collector David Douglas, and while still worked partly as a commercial forest there's much more to it.  It's been a long time since I've visited a forest with quite some much variety; open areas alternate with denser woods and mixed stands of wood are much in evidence.  In this image there are Spruce, Scots Pine, Birch and Rowan all within a few square metres. 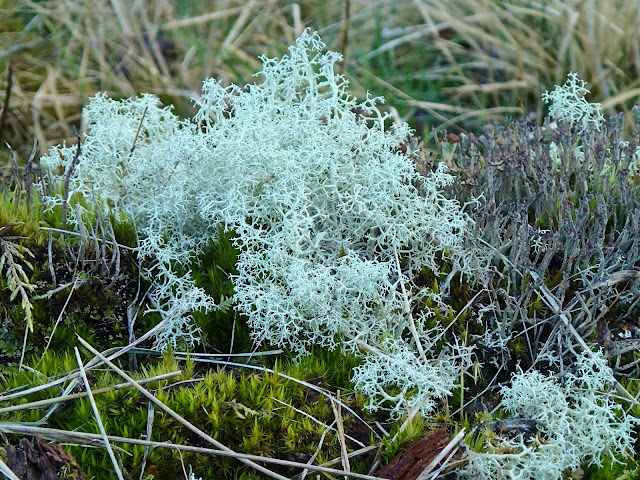 There was plenty of interest in the small scale too, miniature forests of lichen and mosses with just as much variety as the big stuff. 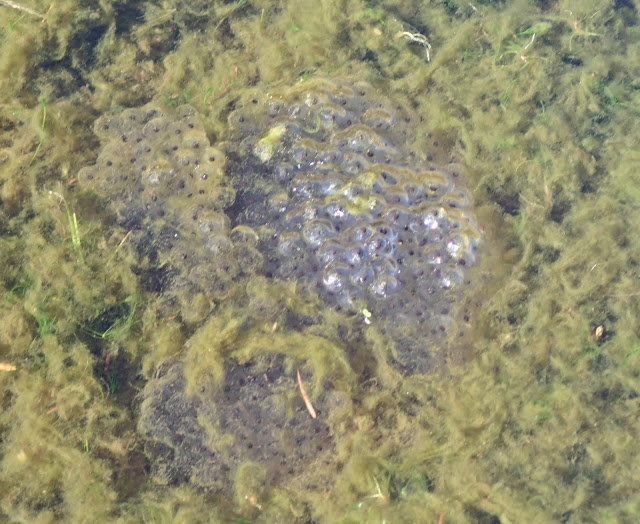 We saw the first frog spawn of the year in a pool beside the path, possibly laid the previous week in the very warm (for February) conditions.  Whether this spawn will survive is questionable with sub-zero temperatures and some snow forecast for the first week of March. 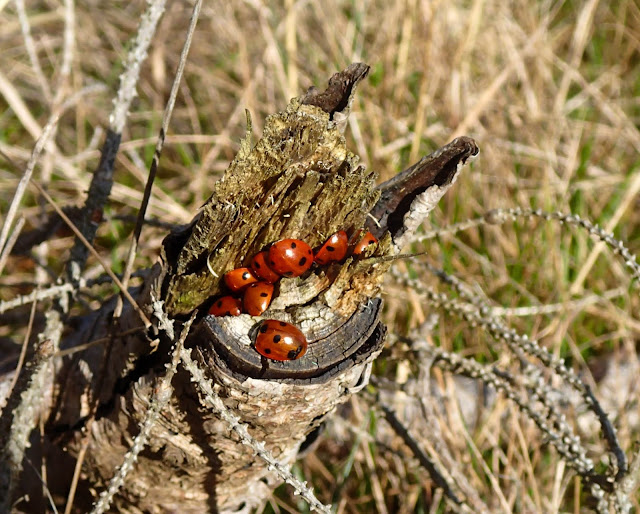 A small group of Ladybirds, probably 7 Spot Ladybirds (Coccinella septemunctata) were sunning themselves in a sheltered spot on an old pine branch.  We've seen a lot of these bright little creatures this winter, our Christmas tree proved to have large numbers hibernating among the branches which we carefully took outside and placed in similar spots in the garden! 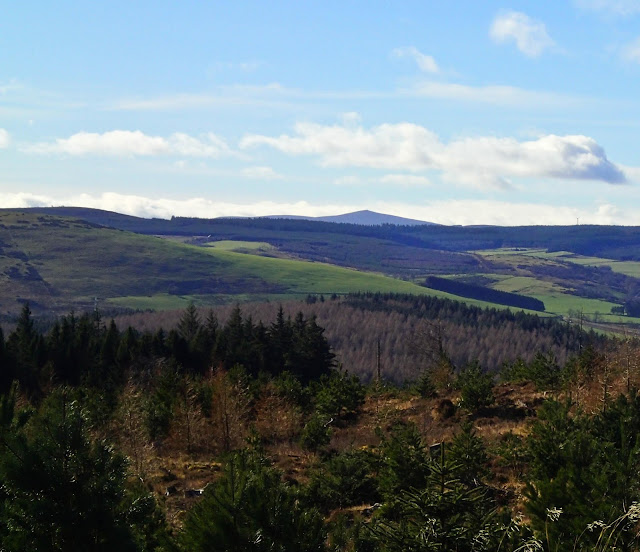 Near the top of the forest the view opens up and our attention switched from the small things at our feet to the wider landscape - this is a view to the Buck, a prominent hill above the Cabrach. 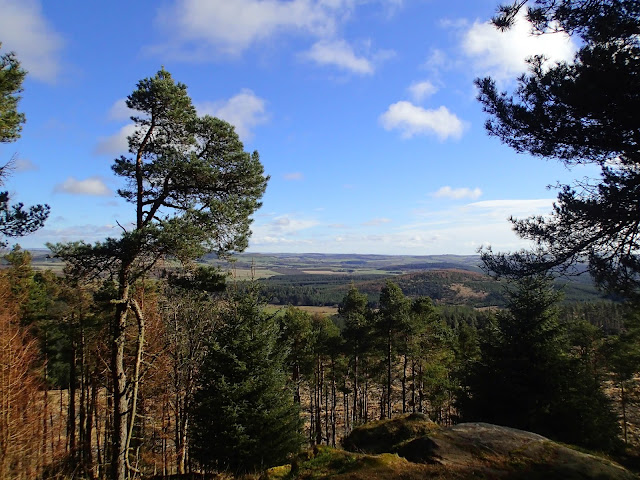 The high point of the Bin forest is the hill after which it's named, the Bin is 313m/1026ft.  "Bin" is probably a variant of "Ben", the Gaelic term for hill or mountain - there's another so named close by, the Bin of Cullen, which is almost exactly the same height.  There top is an outcrop surrounded by trees offering good views through breaks in the canopy.  A nearby pool is known as the "Gallon of Water" and was supposed to have healing powers, especially for children with Whooping Cough.  The walk to the summit followed by a "dook" in freezing water probably would have some effect, one way or the other! 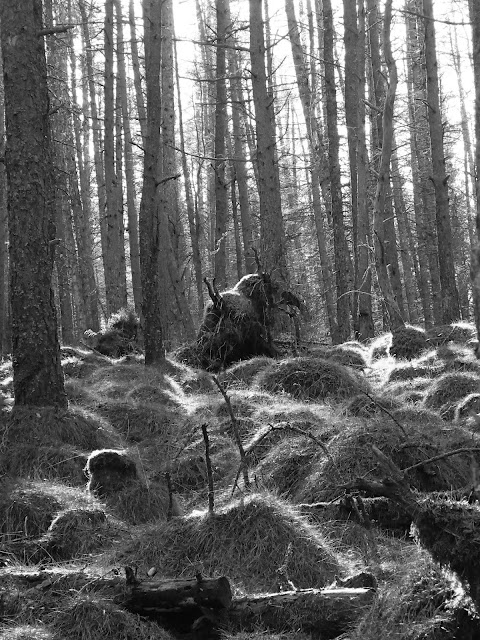 We descended back down to the main track through a wood which little ones would recognise as good habitat for Gruffalo, and half glimpsed a strange creature through the trees....we're still not sure, but it may have been? 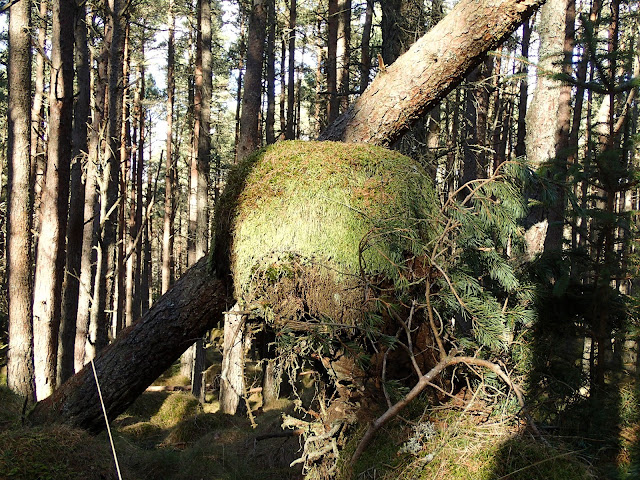 Other strange sights were present in this part of the wood - great mushrooms of mosses........ 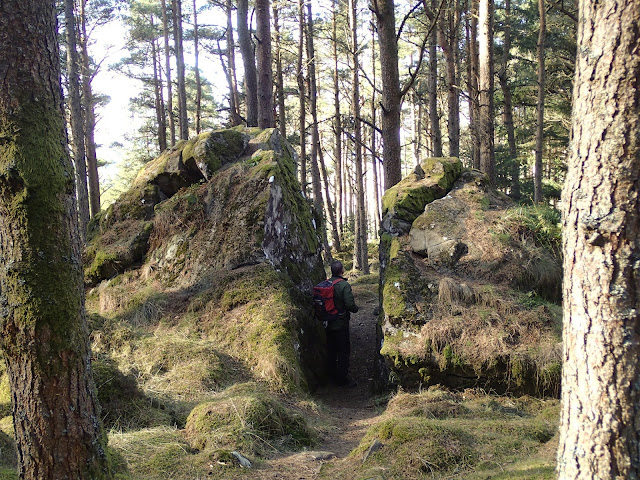 ....and a split boulder through which the path winds.  Our route took the Yellow and White trails through the forest, the longest of the options and circling the hill to arrive back at the car park.  In total our walk was 10km and has around 200m of ascent, mostly on good forest rack with some smaller path sections.  For variety and interest the Bin has lots going for it - and is certainly not rubbish!  As a bonus, the nearby town of Huntly has a number of places to eat.
Posted by Ian Johnston at 08:52 2 comments: