It's been some time since I last climbed Clachnaben, a small but prominent Aberdeenshire hill. With a forecast for bright, cold and very windy day, I spent an hour one evening looking over maps for a hillwalk relatively close to home.

My eye kept coming back to Clachnaben - the hill sort of chose itself.  My previous climbs had both been from the north, so I looked for a different route and worked out a circuit that would work with, rather than against the wind.

A small quarried area off the B974 (the Banchory to Fettercairn road over the Cairn o' Mount, which on this day was closed higher up due to snow) has been made into a parking area from where the shortest route to Clachnaben starts.  The first part of the walk rises gently through open woodland and was very pleasant with sunlight dappling the woodland floor. 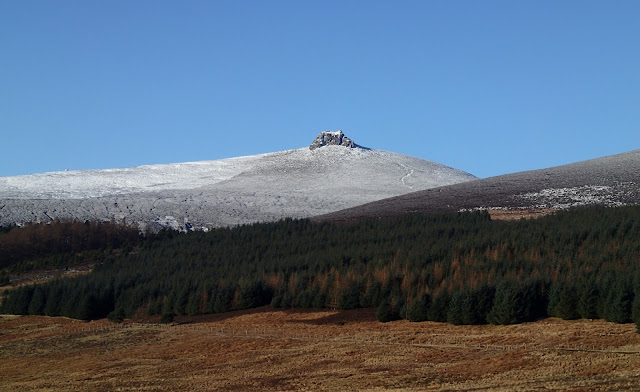 Emerging from the wood there's the sudden "reveal" of Clachnaben ahead.  The granite tor which forms the true summit is very prominent from miles around, particularly as the hill sits in isolation at the end of a ridge above the lower ground of the Dee valley.  Sheltered from the strong northwest wind, and with views like this, it was a superb morning to be out. My route diverged from the "normal" path to the summit and continued around the slopes of Netty Hill into Glen Dye.  The view down to the Water of Dye was an unexpected delight, and would make a great short walk by itself. A quicker way to this point is by parking near to the narrow road bridge at Spital of Glen Dye, but parking is limited, and on a difficult bend.

The ground was so frozen that I'd put two sets of boots in the car, plus crampons.  On looking at conditions on the drive over I'd opted not to use my heavy boots and crampons.  This was the right choice for the hill, but further along the Glen Dye track I was wishing for a third option....ice skates!  The whole track was covered in thick blue-grey ice...there aren't any photographs from this part of the walk as I concentrated on staying upright. 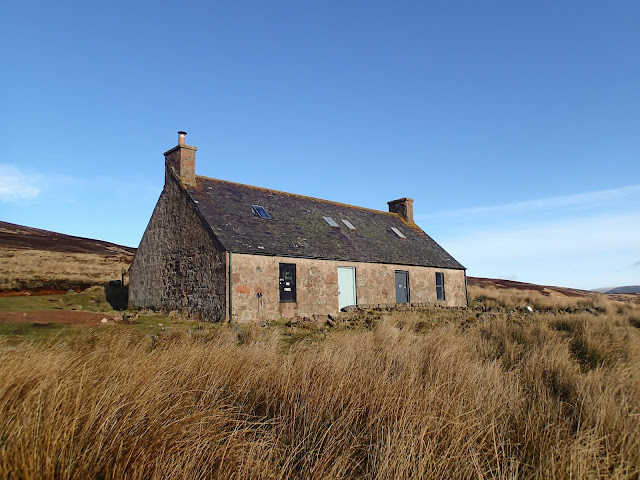 I managed to reach Charr with only one or two "skitey" moments, one of which had me doing a fair impression of Bambi on Ice.......

Charr is now an MBA bothy, and sits in a wild and lonely place; it seems much more isolated than the distance from the road would suggest. 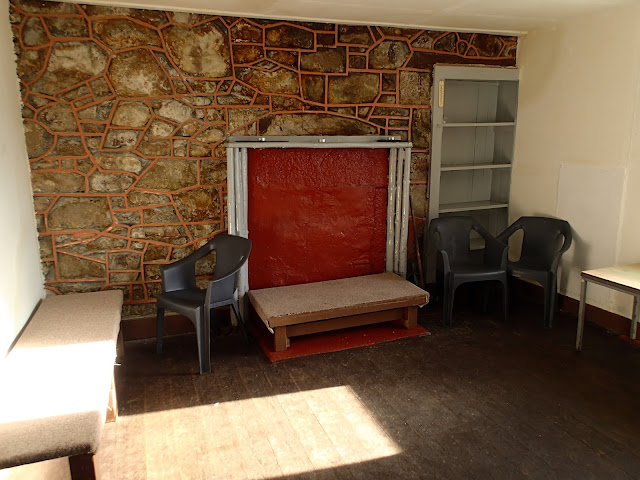 The bothy occupies three rooms in part of the building, the remainder is retained by Fasque estate.  There's no fire or stove here but the place is clean, dry and bright.  I've visited previously but not (yet) stayed here.  I met another walker heading home to Fettercairn over the hills having been dropped at Spital, Charr is on a number of potential routes between Deeside, the Mearns and the Angus glens - which is food for thought for future walks. 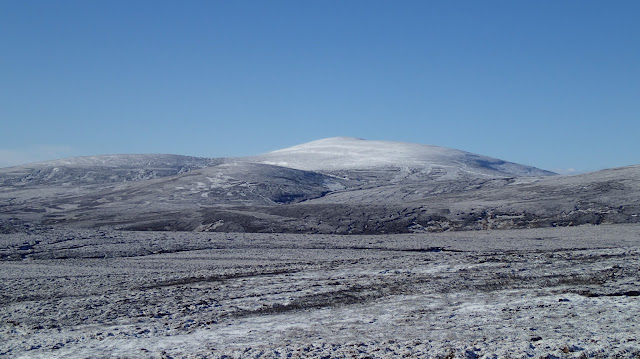 After lunch and a "brew" of tea in the bothy ("Char" at Charr?!) I headed back out and tackled the steep climb up the track beside the Bracky Burn.  Emerging onto the open hill at the top exposed me to the wind, which was absolutely biting.  This was the only leg of the walk where I'd be heading into the wind; I'd planned the route to have it with me on the high ridge leading to Clachnaben. 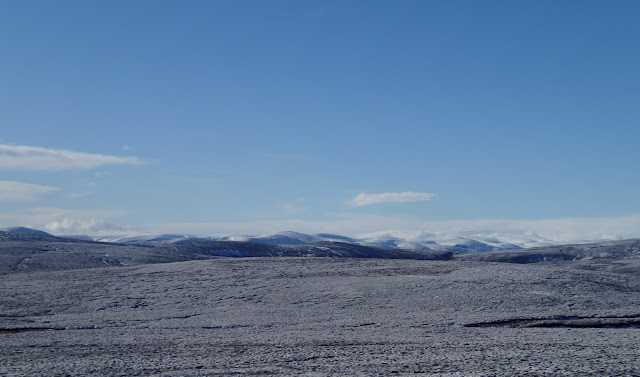 To the west there's a wonderful view of wild, open country with the higer hills leading to the Cairngorm plateau beyond.  It is, essentially, a view of absolutely nothing - and that's a precious thing.  There's word that a windfarm is planned near here with giant turbines; if the planning application goes ahead I will be objecting - this is a landscape which shouldn't be industrialised. 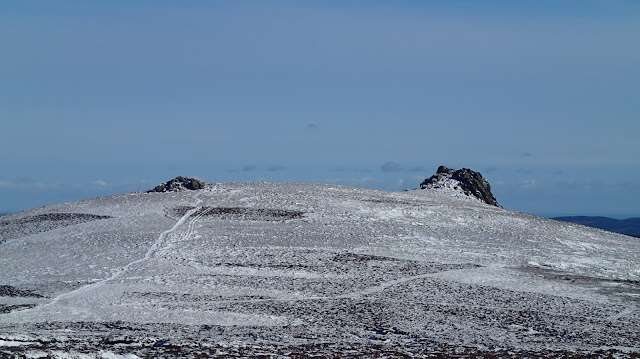 The climbing continues to meet a track between Mount Battock and Clachnaben, where I was really glad to turn and put the wind from my starboard bow to my port quarter, it was searingly cold as well as strong.  Clachnaben's tor is well seen from here, but the view is of the shorter side rather than the full height.  The ground on this ridge is bare and broken, and marked by ATV tracks - it's better under snow than not for this reason. 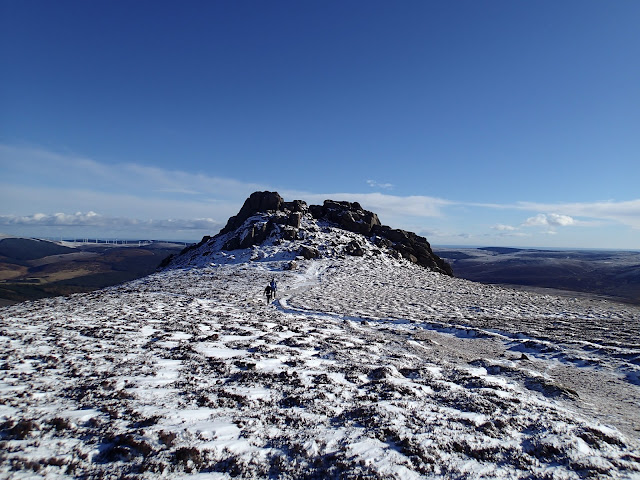 This is one of the hills where the trig point isn't the actual summit.  The scramble up onto the tor is easy in most circumstances but with a combination of ice and the gusting wind I elected not to stand up on the very top block! 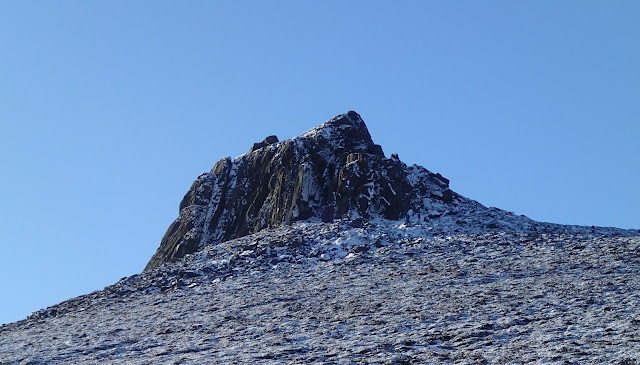 On te direct descent (which is the usual ascent path) the tor is seen at its best. A granite plug, the tor has been plucked by ice and from most angles appears as a "wart" on the slope of the ridge. 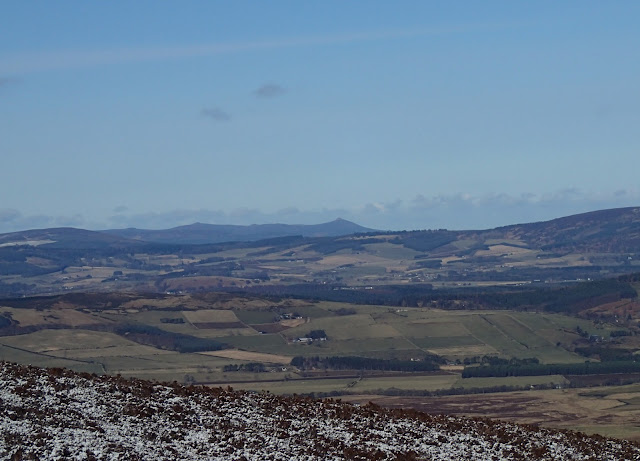 Away to the north there's a good view of that other much loved Aberdeenshire landmark, Bennachie. The distinctive shapes and proximity to the coast of these two fine hills gives rise to the old rhyme :


"Clachnaben and Bennachie, are twa landmarks frae the sea"

On the way back down Clachnaben this set me thinking - would it be possible to climb both hills in a day using a bike to get between them?  A long day for sure, but just maybe......

My circular route was 16 kilometres with around 500 metres of ascent.  I took a little over four and a half hours including a brief stop at Charr bothy.  Other circular routes are possible from the north which can take in Mount Battock and the connecting ridge.  The shortest route is a simpe up-and-down from the B974, but in my opinion this fine hill deserves more than that.
Posted by Ian Johnston at 20:20 3 comments: 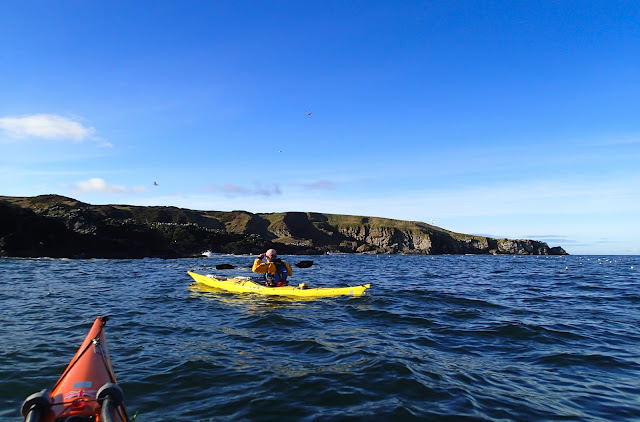 The first weekend of February brought a brief period of calm weather, so Lorna, Allan and I took advantage by planning a paddle at one of our favourite local spots.  Launching from Sandend on a bright but cold afternoon, we headed west towards Cullen.  The plan was just to enjoy some time on the water and to get in among the rock features of this great stretch of coast.

We struggled to see landward in the low winter sunshine - but certainly weren't complaining about a sunny February afternoon! 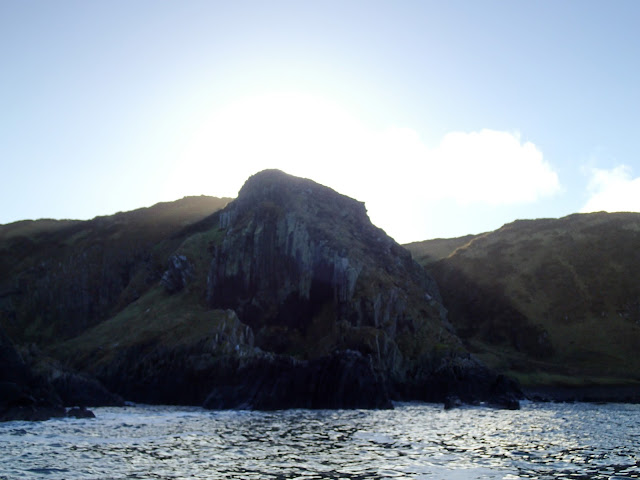 Closer in we were in the shade; the sun streaming over the top of the cliffs creating some great halo effects.  These north facing outcrops see no sunlight through the winter months and can be very cold places. Despite this, the seabirds are beginning to arrive back for their breeding season.  Gulls were loafing around the skerries, as were Shags - while Fulmars already seem to be occupying territories and threatening all intruders. 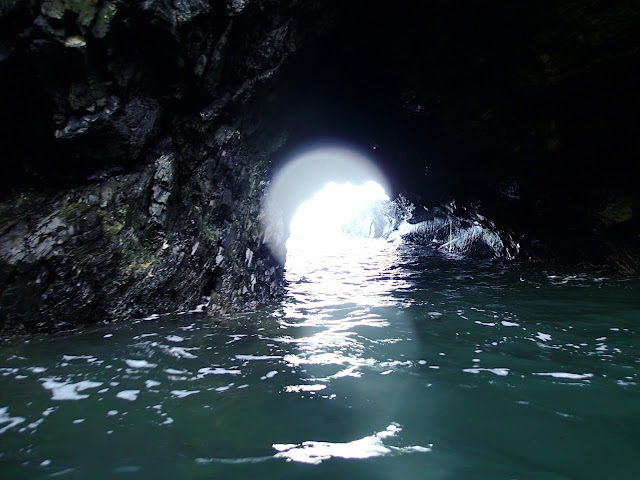 This cave-arch is a hidden gem - we seek it out each time we kayak here.  In the summer it gets the most wonderful lighting - in the winter the atmosphere is a little darker. 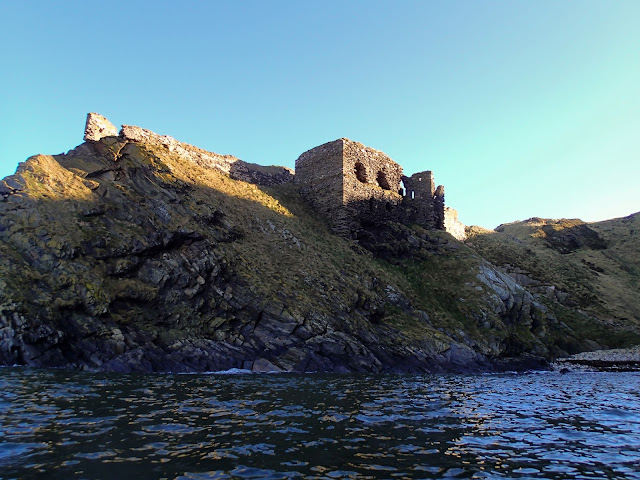 The afternoon sun picked out the ruin of Findlater Castle really well, the calm conditions allowing us to rest a while in the bay below. 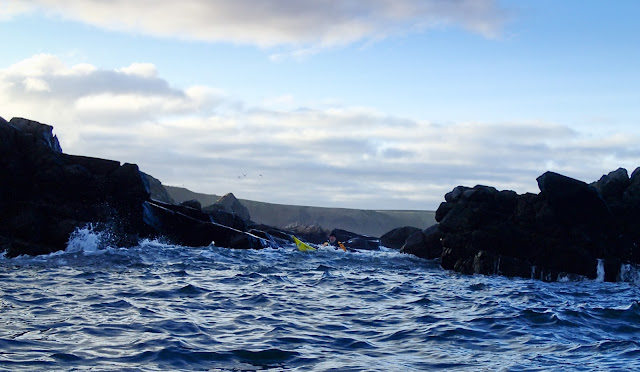 The swell was low, but quite long period and with considerable energy, at times giving sporting passage through narrow gaps - lots of fun! 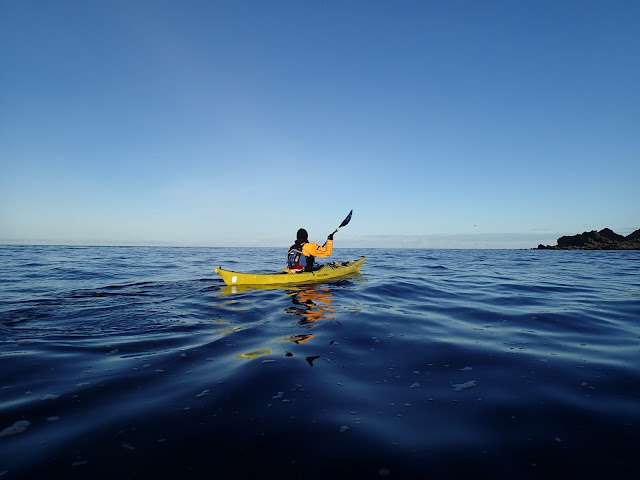 After a break for coffee and sandwiches on a small beach in Cullen Bay, we headed back towards Sandend with the evening sun on our backs.  The breeze dropped along with some of the swell - a relaxed end to an afternoon of winter rockhopping.
Posted by Ian Johnston at 19:26 4 comments:

A "once in a blue moon" night

Lunacy - intermittent insanity, formerly believed to be related to phases of the moon.


The night of 31st January saw a "supermoon", the third in a series of full moon events where the moon would be at a comparatively close distance from the earth. It was also a "blue moon" - the second full moon in a calendar month, which as the saying goes, doesn't come around that often.  Predicted to appear 7% larger and be 15% brighter than an average full moon, it seemed like a good idea to try and experience it to best advantage.

We are fortunate in having very little light pollution at home, so it there might be a good view, but how about getting up into the hills to see the effect amongst winter mountains?

I set out from Crathie on Deeside at sunset, aiming to spend a night out and get the best possible view. 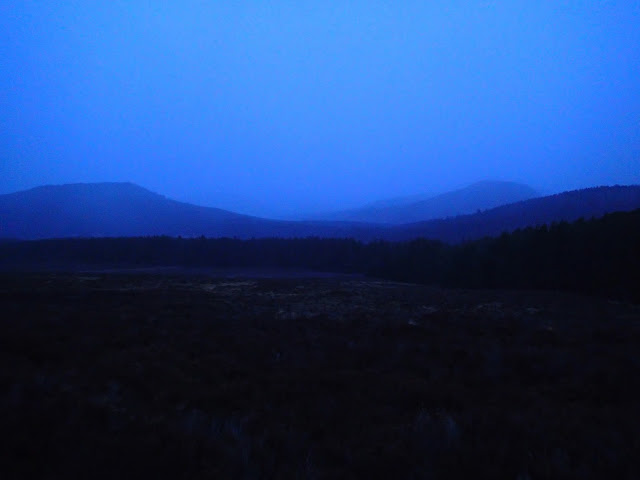 Emerging form the forest onto the open hill well after sunset, I thought that maybe I'd made a mistake.  A snowstorm came sweeping in from the north west and made for some fairly brisk conditions on the walk in.

My destination for the night was Gelder Shiel bothy on the Balmoral estate.  I'd noted fresh bootprints on the track and so was expecting to find somebody else in residence, and so it proved.  Mike and his dog "Sheba" had arrived just before dark and had the stove lit and the place nice and warm. 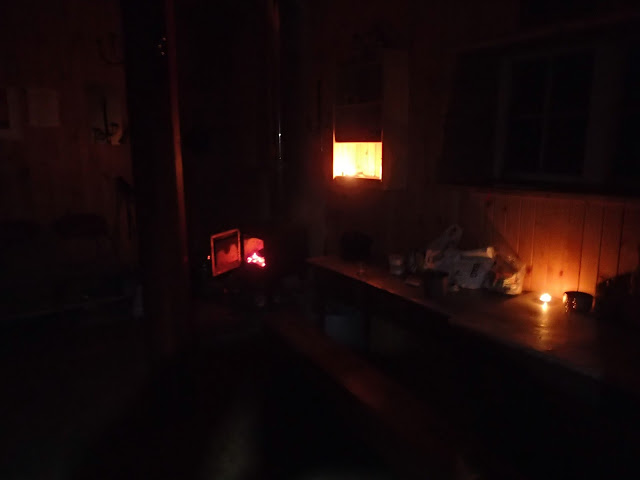 I've used Gelder Shiel several times; my abiding memories are of a very cold stone building, but a recent renovation by the MBA and the "Ballater Chiels" has transformed it into one of the best of bothies, cosy and warm.  Once settled into the bothy, I took a look outside.... 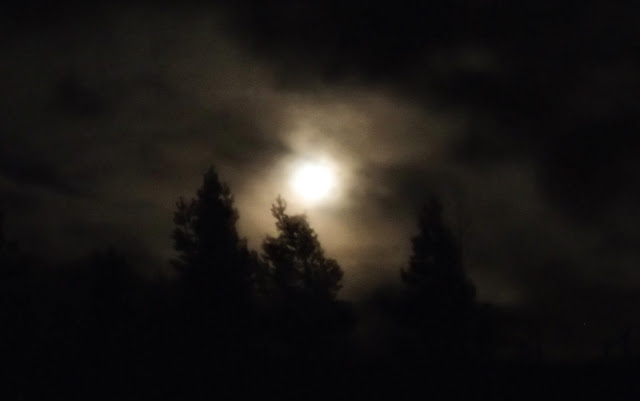 ...where the cloud had broken up and the full moon was sailing high in a ragged sky, almost stroboscopic as the cloud alternately obscured and cleared. 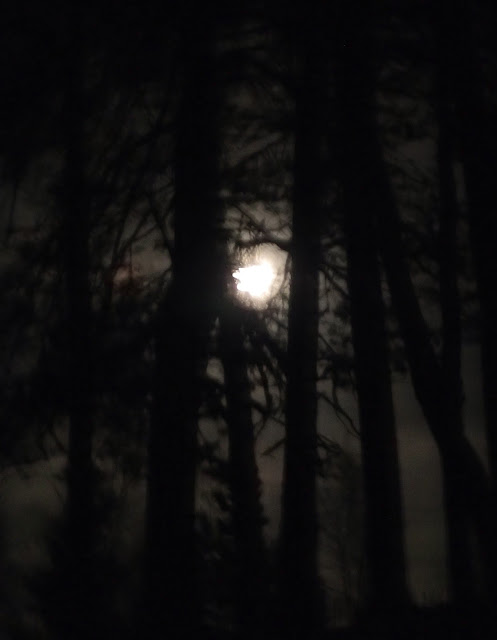 In the small wood surrounding the bothy the effect was all light and shade, a zebra pattern on the fresh snow. 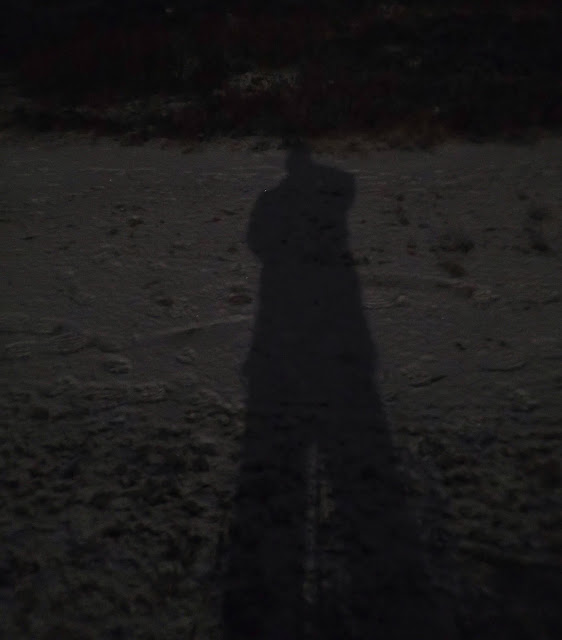 Mike and I took a walk up the track above the bothy.  When the cloud cleared, the light levels were truly astounding, our shadows sharply delineated. 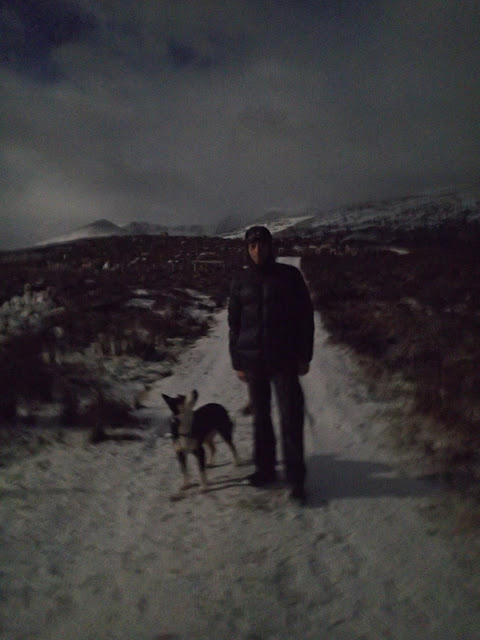 All the images in this post were taken on a compact camera with the flash switched out, the light levels really were as portrayed.  Behind Mike and Sheba is Lochnagar, the cliffs floodlit with brilliant light. 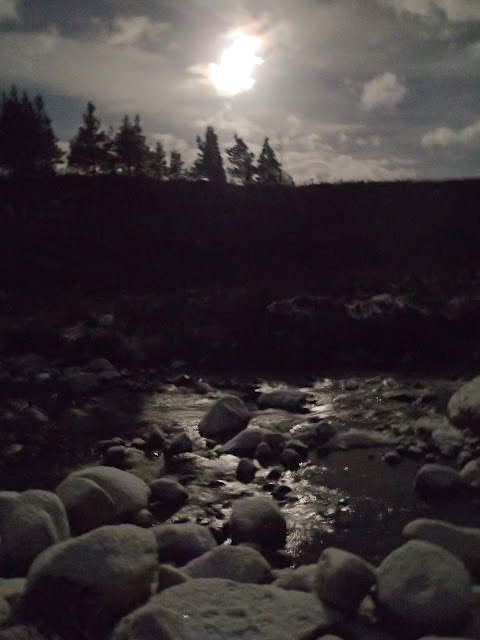 Moonlight is often described as "silver", but this went beyond that - it was arc-light bright.  Every feature in the landscape was picked out sharp and clear - an utterly brilliant night to be out. 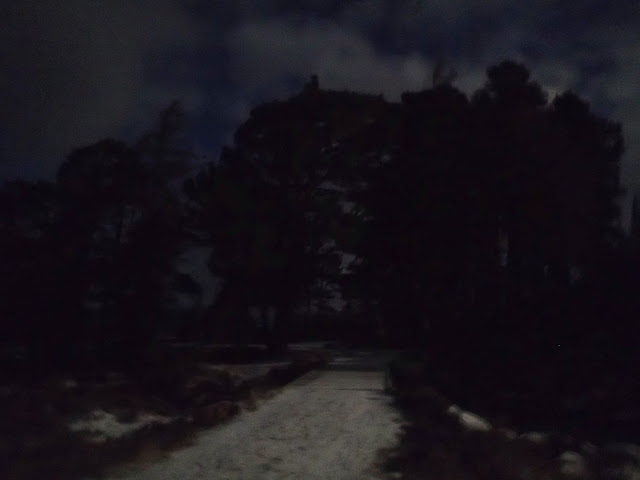 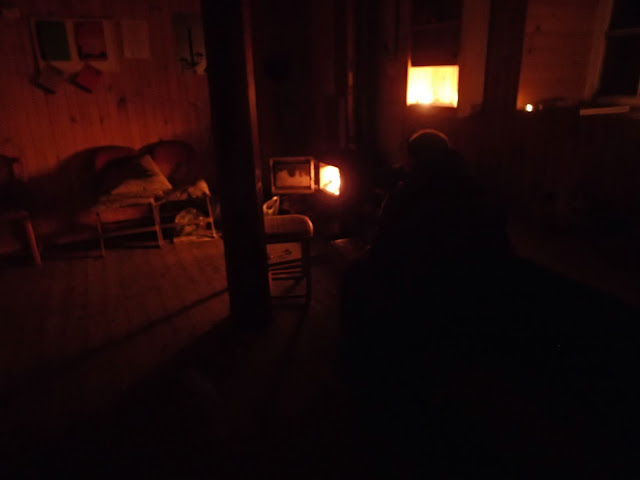 Bright it may have been, but it was also searingly cold in a strong northerly wind.  We three returned to the bothy and banked up the wood-burner. 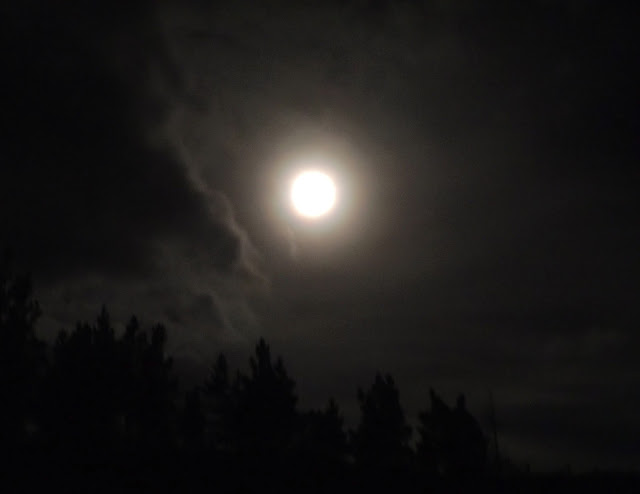 I took a walk out just before getting into the sleeping bag, there was a corona around the moon formed by ice crystals in the lower atmosphere. 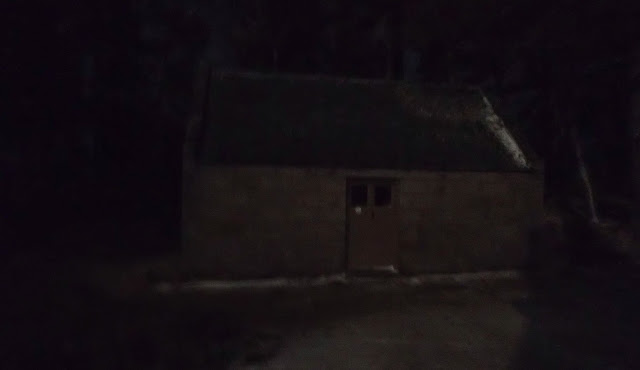 As the moon moved across the sky it shone through the skylights in the bothy.  A brief turn out in the small hours to answer a call of nature had me diving back for the camera - the bothy washed by light. 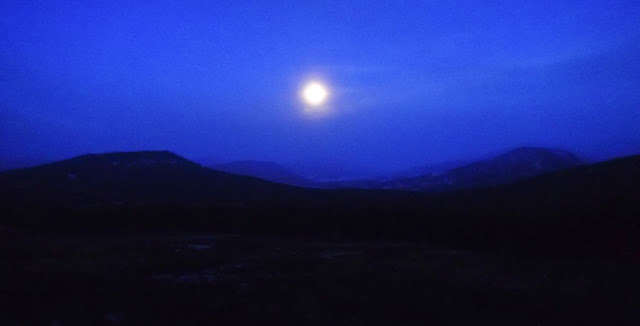 I had to leave early to be home and do a day's work.  All night the wind had roared around the building, making some weird noises as the gusts built.  I headed out into what would normally have been pitch blackness, but on this morning was still lit by a super supermoon.  Truly this had been a "once in a blue moon night".

By the time I reached home just after dawn, the day had turned very nasty - a northerly gale and stinging showers rattled in as February roared in.  But what a great night it had been.....
Posted by Ian Johnston at 20:35 6 comments: