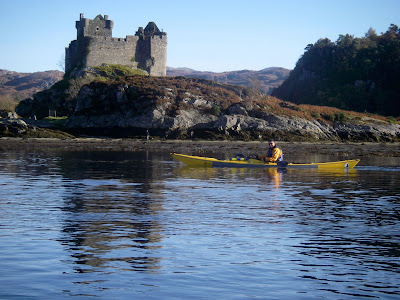 Castle Tioram sits at the mouth of Loch Moidart on the rocky Eilean Tioram (Dry Island). Probably started around the 14th century, it's an imposing pile. It is associated with Clanranald, and particularly with the females of the clan. We had a stunning autumn paddle in October 2009 around Eilean Shona, starting beneath the castle on a bright, frosty morning. 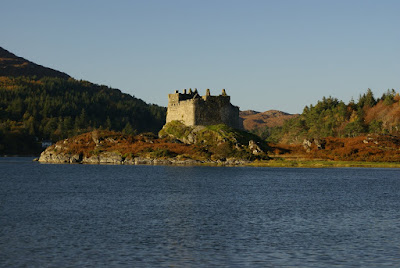 The defensive position of the castle is well illustrated in this picture, but it had a flaw. built on an island called "Dry Island" - it didn't have a well and so couldn't withstand long sieges. Clanranald has a very bloody history. A very prominent clan which traces it origins to Somerled, Lord of the Isles, most of the chiefs up until the 18th century appear to have died by sudden or violent means. 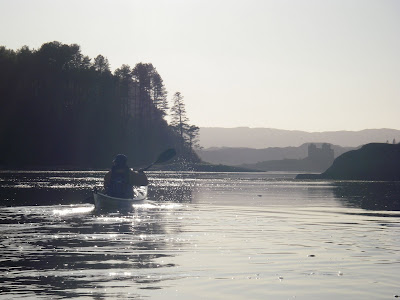 Heading back towards the castle in the evening light via the north channel of Eilean Shona, Castle Tioram appeared calm and serene, afloat on its island. Sadly, the castle is the subject of a wrangle between the current owner who wants to convert it to a dwelling, and Historic Scotland (a government agency) who insist it must remain a ruin. Meantime, the building is suffering the ravages of time and weather.

Posted by Ian Johnston at 20:06 No comments:

In the north west of Scotland, another dramatic ruined castle stands guard 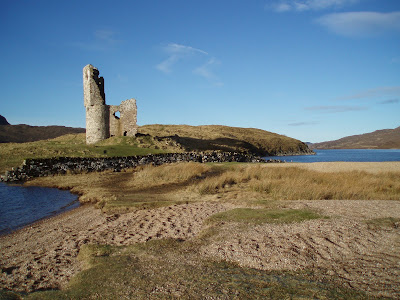 Ardvreck Castle is on a rocky point in Loch Assynt near Inchnadamph and guards the strategic ford now occupied by Skiag Bridge. The castle is on the route from the south to Lochinver, and, via a pass on the shoulder of Quinag, to the far north. It was built around 1490 and was a MacLeod stronghold.

It's a very dramatic and atmopheric ruin, a stark tooth of stone rising from a wild loch. It always seems to me to have an air of cold indifference. Certainly it gave cold comfort to the Marquis of Montrose, who was betrayed and captured whilst sheltering here in 1650 after the defeat of the Royalists; a remarkable breach of traditional values by the wife of the MacLeod chief. 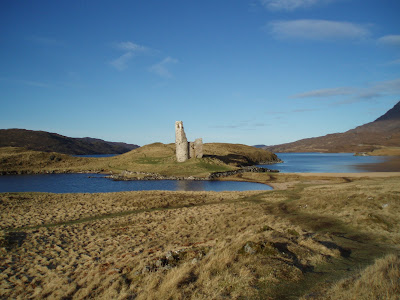 In this view of the castle, a sense of the strategic position is shown. The steep slopes of Glas Bheinn (776m) sweep up from the loch shore, routing travellers and armies right to the castle. A little to the north west is the superlative mountain Quinag (the stoup, or milk bucket). One of my favourite hills, I've climbed it, kayaked along part of it's base and stayed in a cottage at it's foot - I really recommend it!
Posted by Ian Johnston at 18:14 No comments: