A year of light

This year seems to have had great quality of light -  or perhaps I'm just noticing it more?

Certainly 2016 started with anything but light - the devastating flooding resulting from day after day of intense rainfall which inundated homes, destroyed infrastructure and altered the courses of some of Scotland's rivers.  The effects are still being felt and many residents across the country are still not back in their homes. 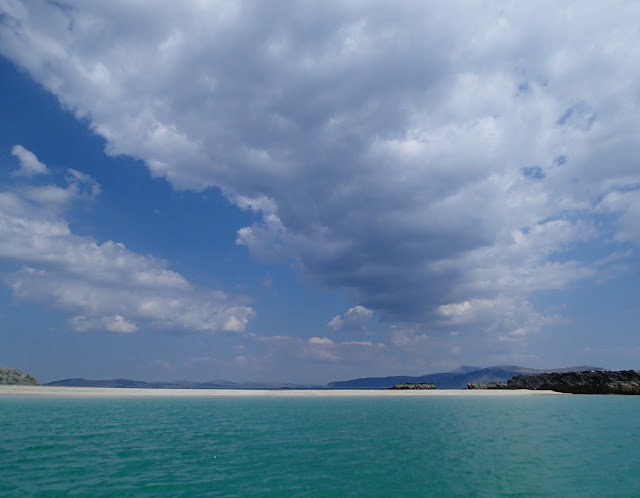 There's been light.  From huge Hebridean skyscapes and watercolour shades.... 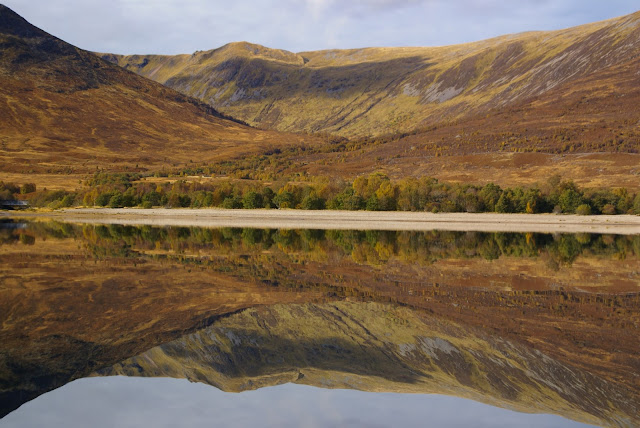 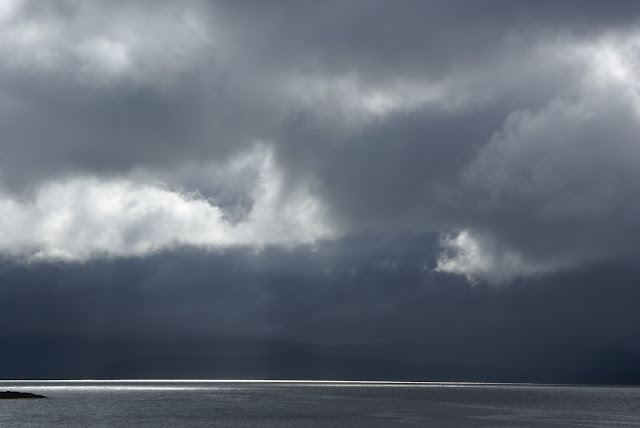 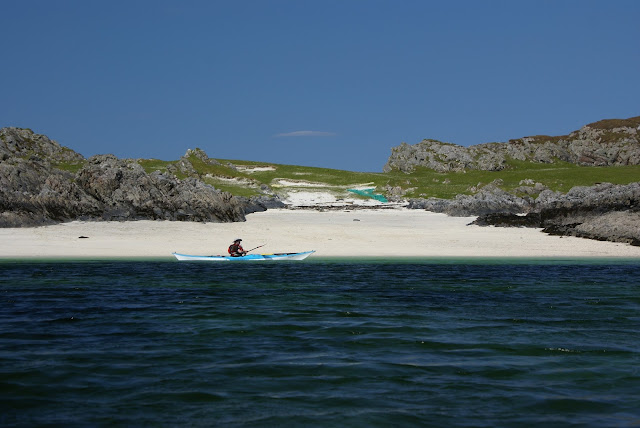 To searing primary clarity...... the light has added immeasurably to being "out there". 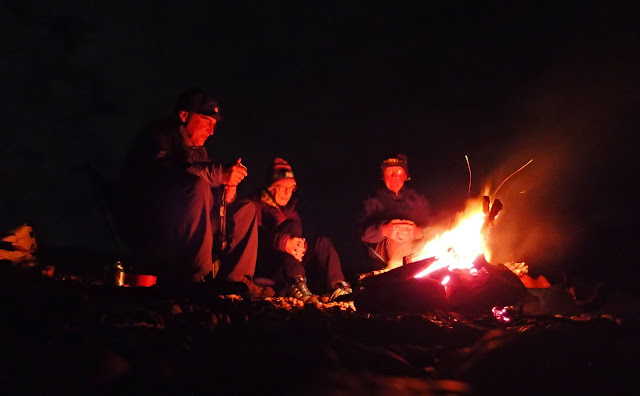 There's been the glow of friendship; a shared love of wild places, and the intimate circle of flickering warm light around our camp fires....... 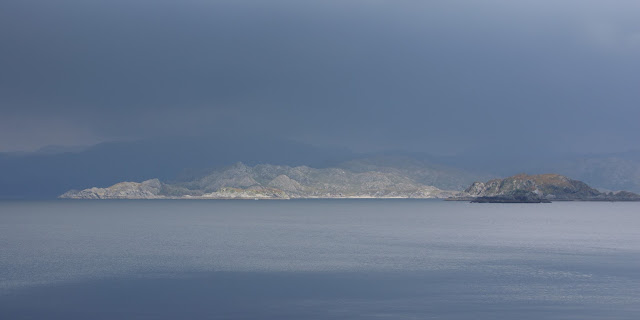 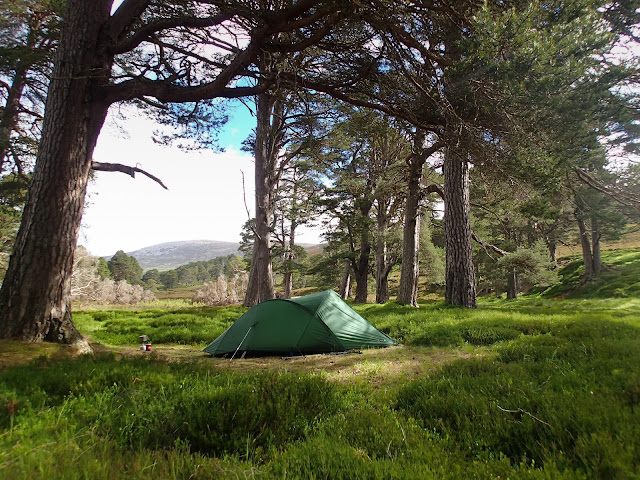 ..and the dappled warmth of a forest morning - welcome after a night of rain. 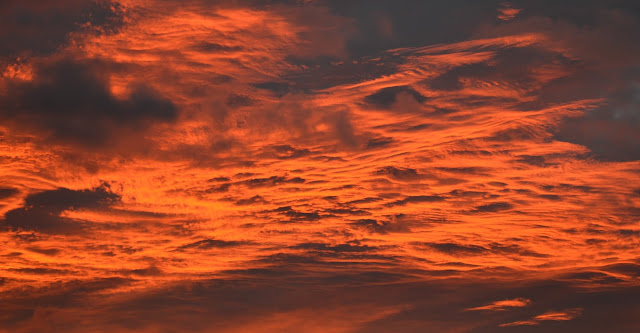 Then there's been the light at each end of the day; slow sunrises of staggering majesty over the Aberdeenshire farmlands of home..... 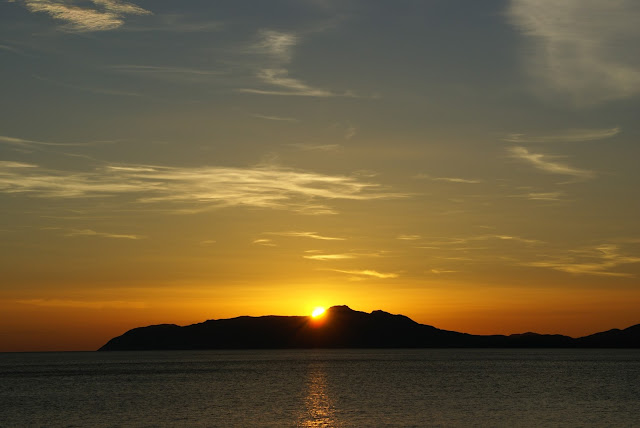 ....and a whole series of pyrotechnic west coast sunsets

Solas in the Gaelic language -  in infinite variety light has been a thread - it truly seems to have been a year of light.
Posted by Ian Johnston at 16:59 10 comments:

Christmas Day 2016 in Aberdeenshire was one of the warmest on record - we saw an afternoon temperature of 14.5 degrees Celsius. It was very windy though, a tearing gale ahead of Storm Conor - and once the front had passed........ 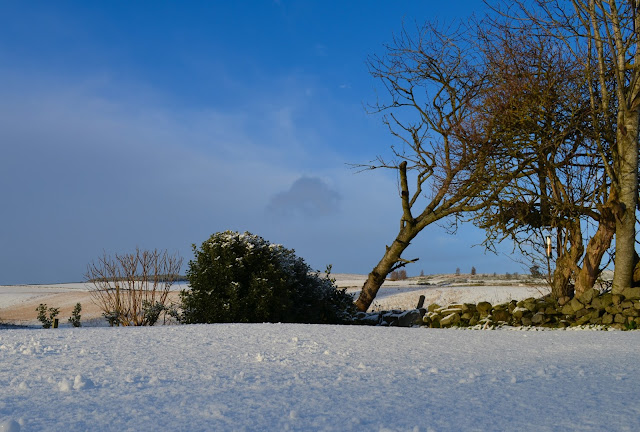 ...Boxing Day dawned with something altogether more seasonal!  The mild air has been replaced with temperatures hovering around freezing....... 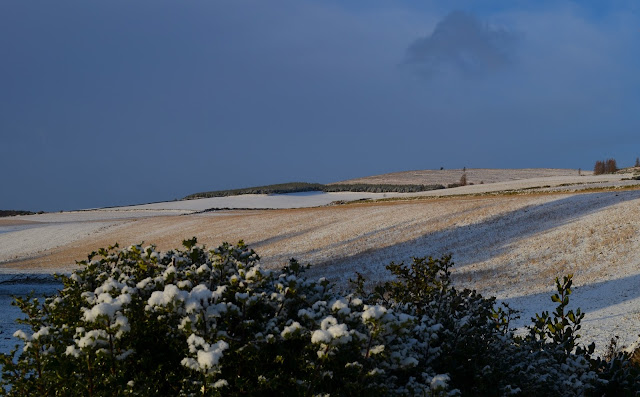 ...and snow showers never too far away.  A white Christmas - belatedly.
Posted by Ian Johnston at 10:54 6 comments: 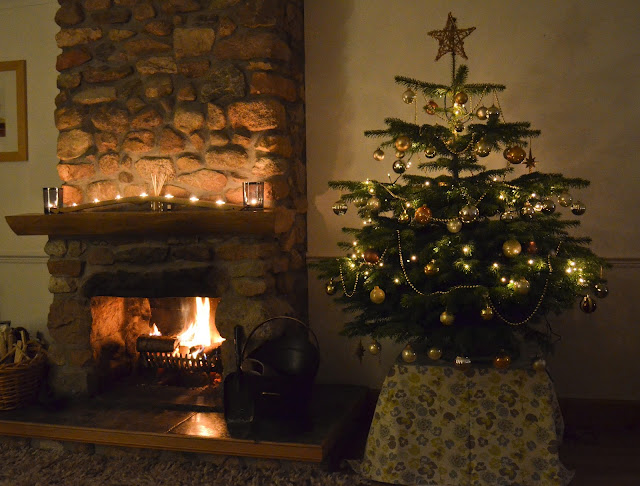 Wishing you peace, health and happiness wherever you may be this Christmas
Posted by Ian Johnston at 15:12 12 comments:

Pale shapes beyond the Pale

Whilst working in the north west of England, a Saturday afternoon with the promise of dry and bright winter weather tempted me to look for walking locations.  As the area was unfamiliar, nearby Delamere Forest looked a good place to start.  The bright sunshine and clear air at the coast were replaced by dense mist as I drove to Delamere, obscuring the sun but lending great atmosphere.

As expected, most of the trails were busy with families enjoying the dry conditions and escaping the madness of pre-Christmas retail pressure, and with dog walkers and cyclists.  It's good to see the forest so well-used, although there wasn't much of a sense of solitude.

Having walked the longest of the trails around the forest and its glacial relic lake, I decided to extend my walk to take in another trail which led up and over Old Pale, which as the name suggests was once fortified, as was nearby Eddisbury Hill.  Old Pale forms the highest point of the northern part of a long sandstone ridge above the Cheshire plain.

Seven counties are visible from the 176m/577ft summit, marked by a sandstone monolith surrounded by stones representing the seven counties.  On this misty day, not even one county was visible though!  A cloud sea just below the summit extended to the horizon in most directions, but offered an atmospheric descent.... 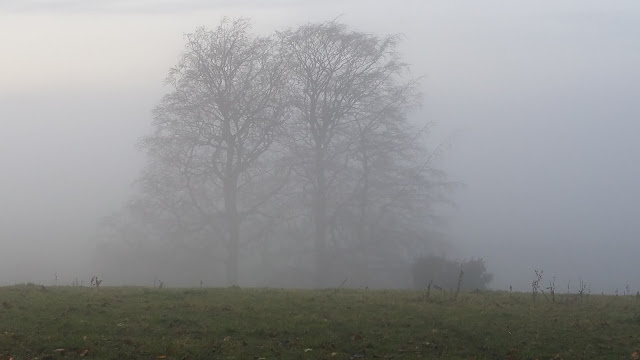 Shifting mist brought trees in and out of focus; pale shapes looming from the grey and then disappearing again..... 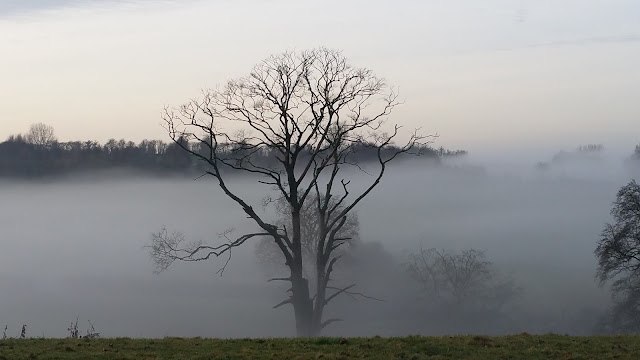 A slight sinking of the cloud sea allowed the shapes of winter trees to stand out in sharp silhouette, all the more marked as I'd been in mist for several hours. 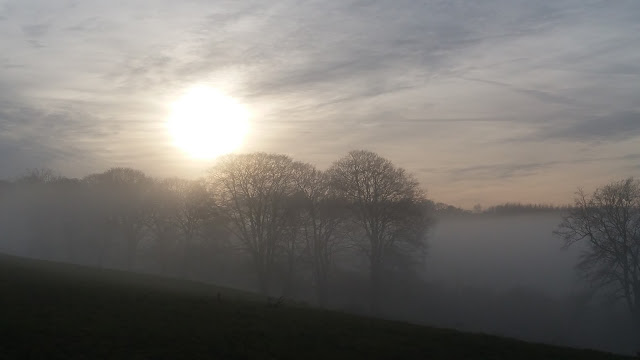 As the sun dipped towards the skyline the lowering rays made for a very atmospheric winter scene- a small effort to make time for a walk had been amply rewarded.
Posted by Ian Johnston at 20:12 6 comments:

Stillness and symmetry - an autumn day on Loch Laggan 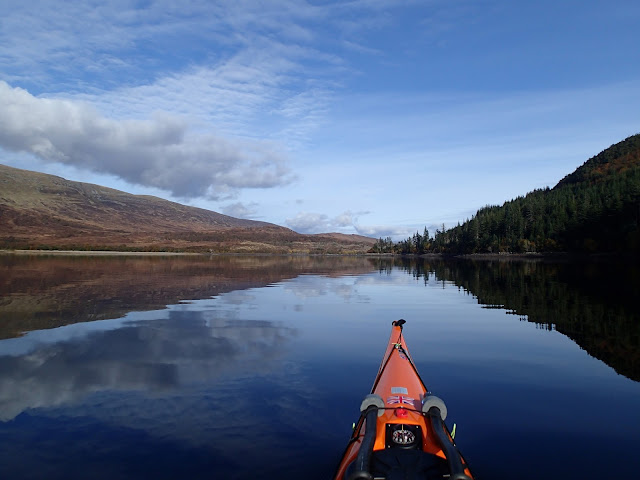 As Allan and I continued our paddle back up Loch Laggan the windless conditions made for great lighting effects.  Ahead, a narrowing reflection of the sky onto the water led the eye to a point of convergence.  I've noticed before that where this happens, the subconscious tendency is to head straight towards the point of convergence. 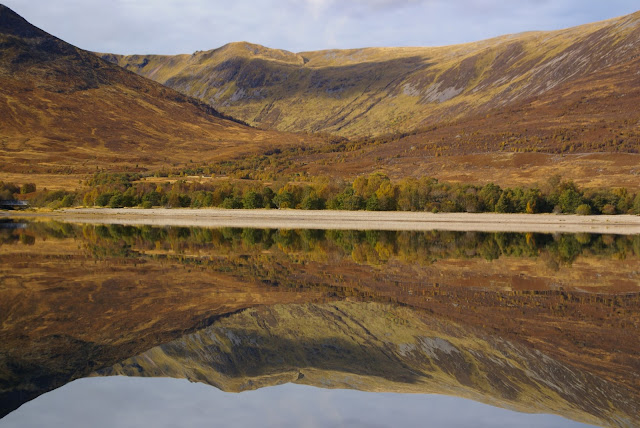 Across the water, Coire Ardair of Creag Meagaidh was reflected in gorgeous symmetry with warm autumnal colours projected onto the loch.  The stillness of air and water contributed a lot to the totally relaxed atmospere of the day.

There are a couple of tiny islands in Loch Laggan, and although small, this one holds plenty of interest.  Named Eilean an Righ (King's Island), the map marks the remains of an "Island Dwelling".  We landed to take a closer look at the ruins - which hadn't been possible due to a different water level last time I paddled here.  The island at first apears to be a possible "crannog" - an artificially built platform but is believed to be entirely naturally formed. 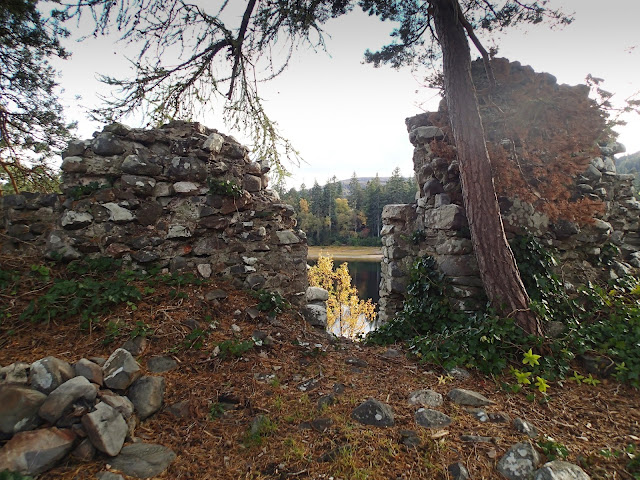 The visible ruins consist of wall sections made from stone mrotared with lime.  A doorway is clearly visible looking out to the south.  The internal dimensions of the building have been calculated as 28m long by 5m wide, so it would have been reasonably large.  The ruins have been dated to around 1500 and overlay a much older structure which may have been burned.  Fragments of a clinker built boat of roughly contemporary date have been found here and at various places in the loch the remains of dugout canoes have been uncovered so there is clearly a long history associated with the place. 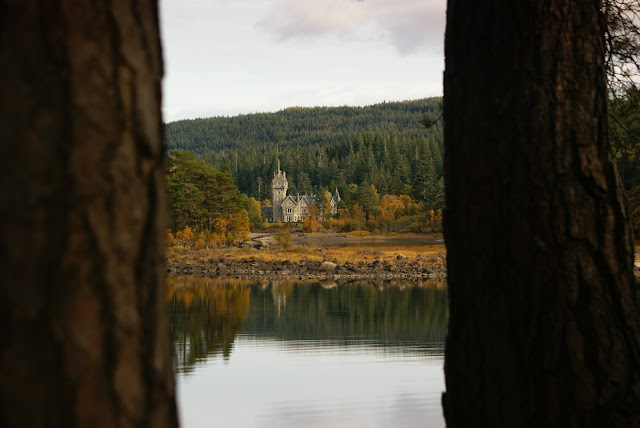 From Eilean an Righ there's a nice view across the water to Ardverikie House, which looks very grand in it's setting next to the loch, particularly when autumn colours are at their best. 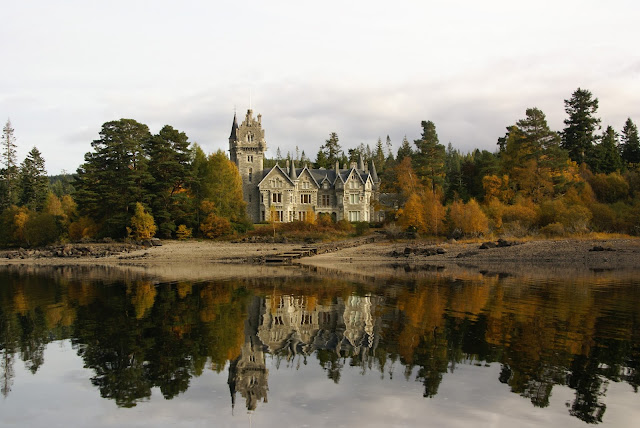 Ardverikie was completed in 1877 in the Scots Baronial style which was popular amongst landowners of the day.  In more recent times it has been used as a filming location for the TV series "Monarch of the Glen" and for the film "Mrs Brown" portraying the life of Queen Victoria's ghillie John Brown. 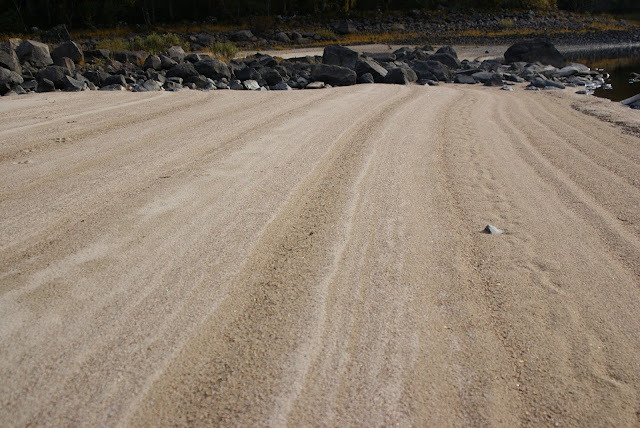 A little farther along the loch we came upon this small beach of pale sand which looked as if it could be a feature in a Zen garden.  The lack of tide and relative lack of wave action had allowed the different water levels to each leave their mark as if raked over the sand. 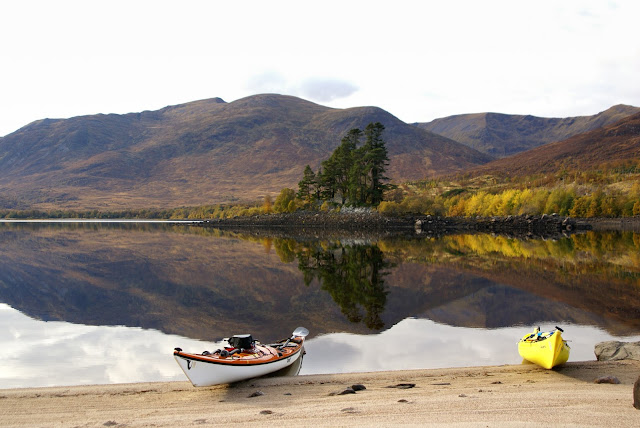 It seemed a fine spot to land for a coffee, to enjoy the stillness and to contemplate what had been a really good short day's on the water.  Kayaking on fresh water is just a bit different from sea paddling - but it does offer some great days out.
Posted by Ian Johnston at 10:34 10 comments: