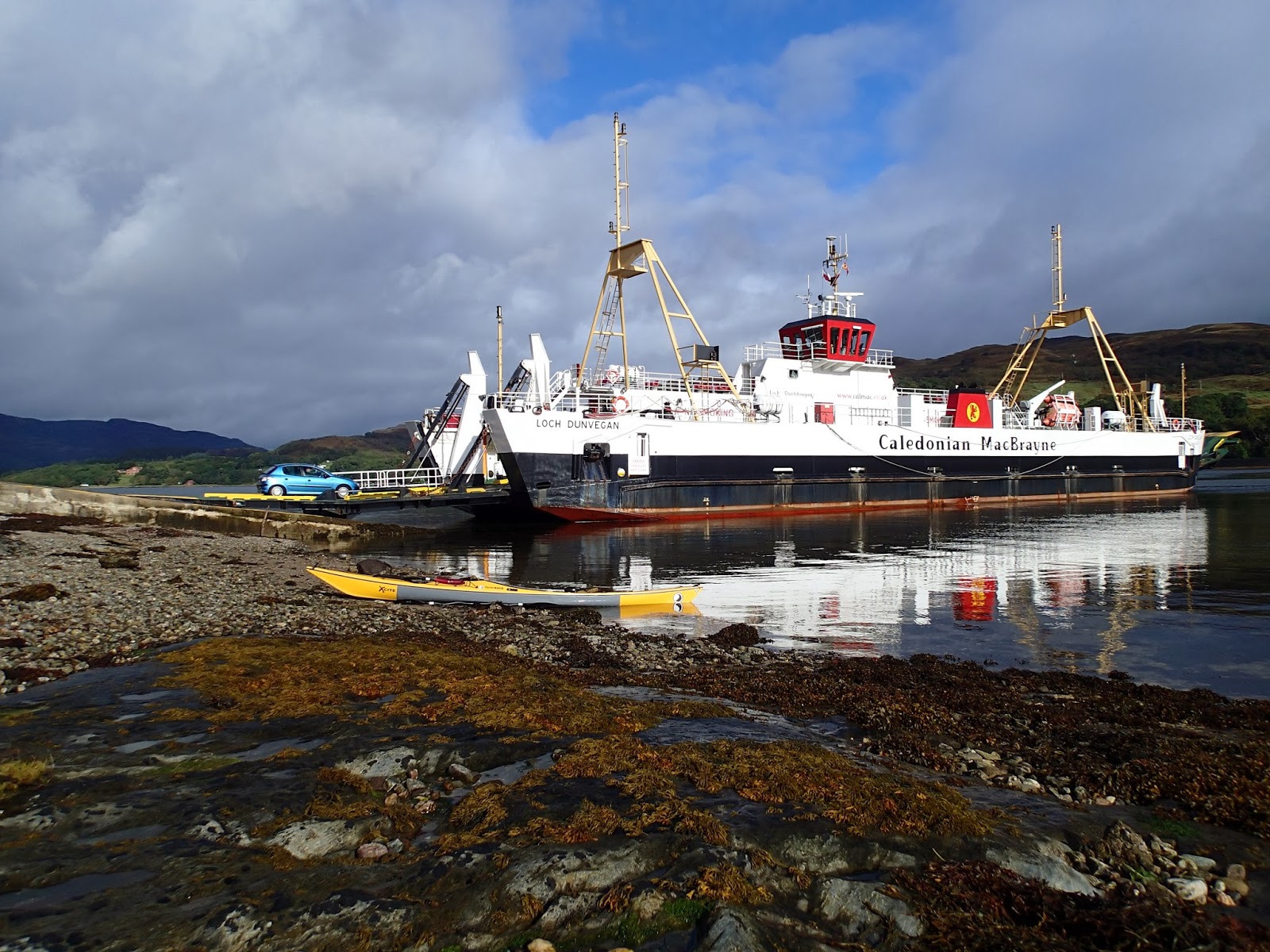 Back in October whilst visiting relatives on the Isle of Bute I had an opportunity to do some paddling on the Kyles of Bute, the narrow strait of water which separate the island from the Argyll mainland, into which the north of Bute fits like a ball and socket.

I set out from Rhubodach on a clear and calm morning, waiting until the ferry to Colintraive, MV Loch Dunvegan, departed on her short voyage. 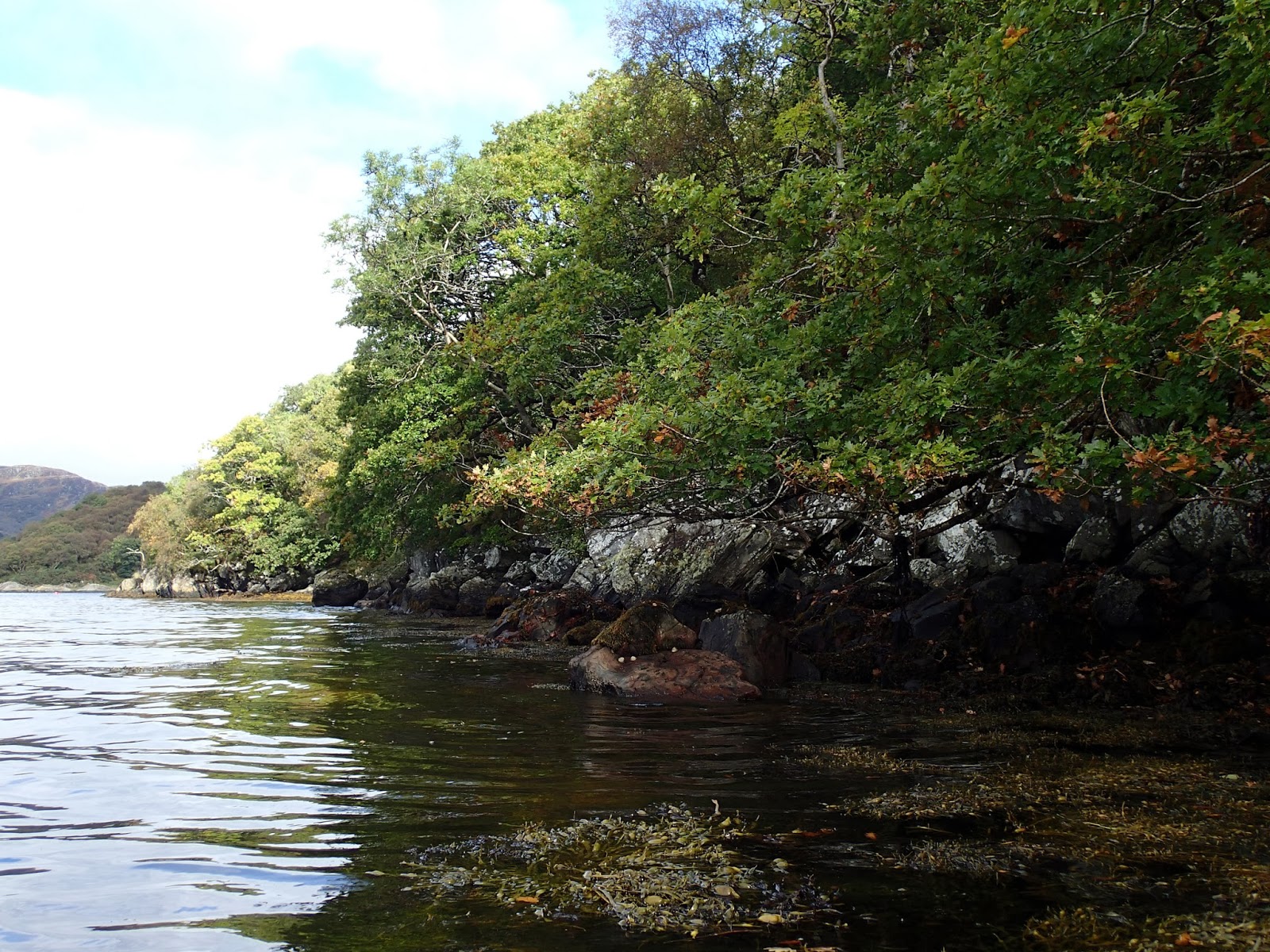 My route took me up the east Kyle and then into Loch Riddon, which is a shallow sea loch lined with maritime oak woods.  Autumn's full colour was still to develop but the trees were laden with acorns. 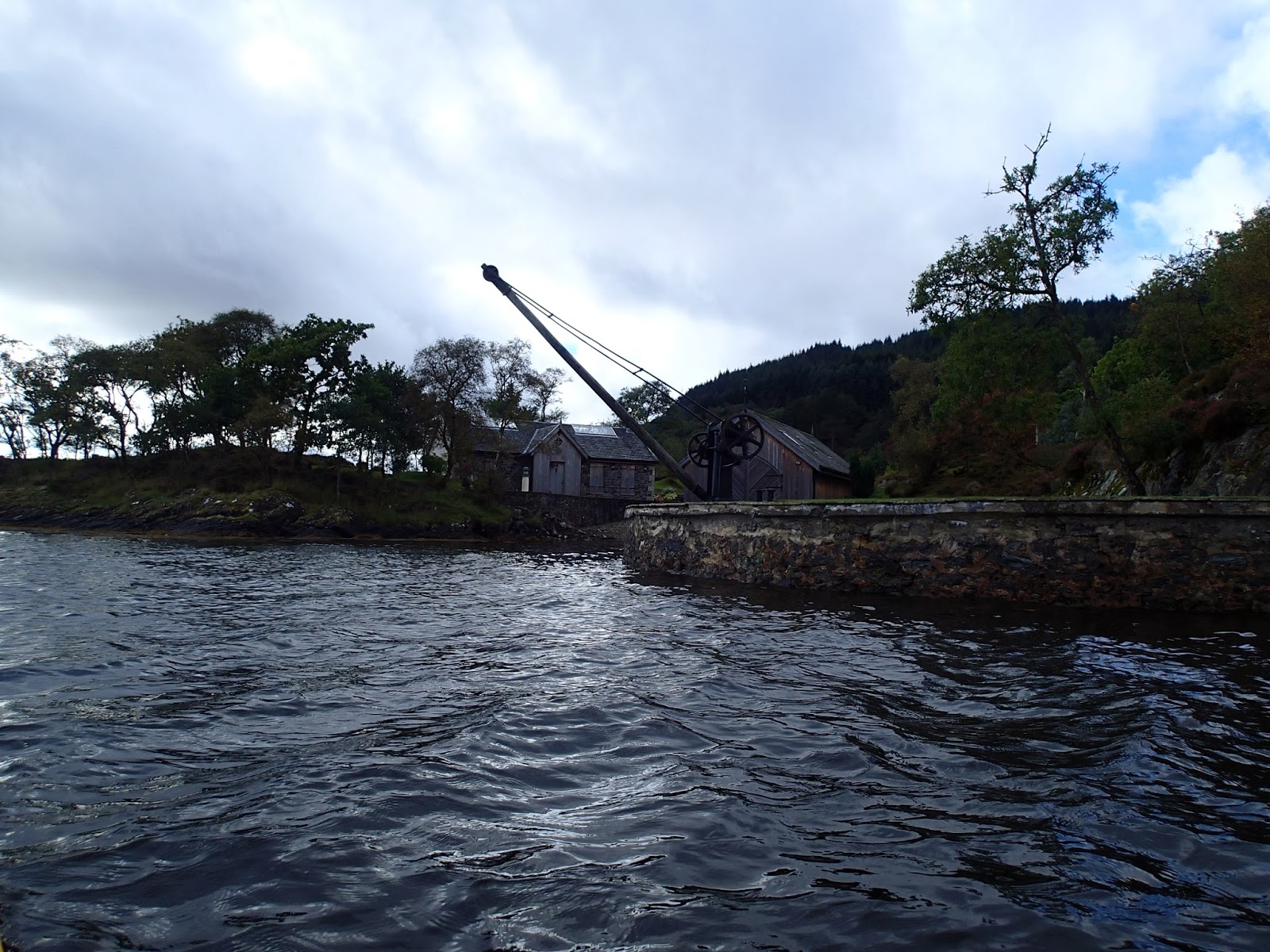 After paddling to near the head of the loch on the east shore I came back down on the west shore and arrived at Eilean Dubh (the dark island) behind which is a popular if small anchorage for yachts.  Remains of estate infrastructure stands in remarkably good condition near the island, this crane looked as if it could be put back into service with a bit of work 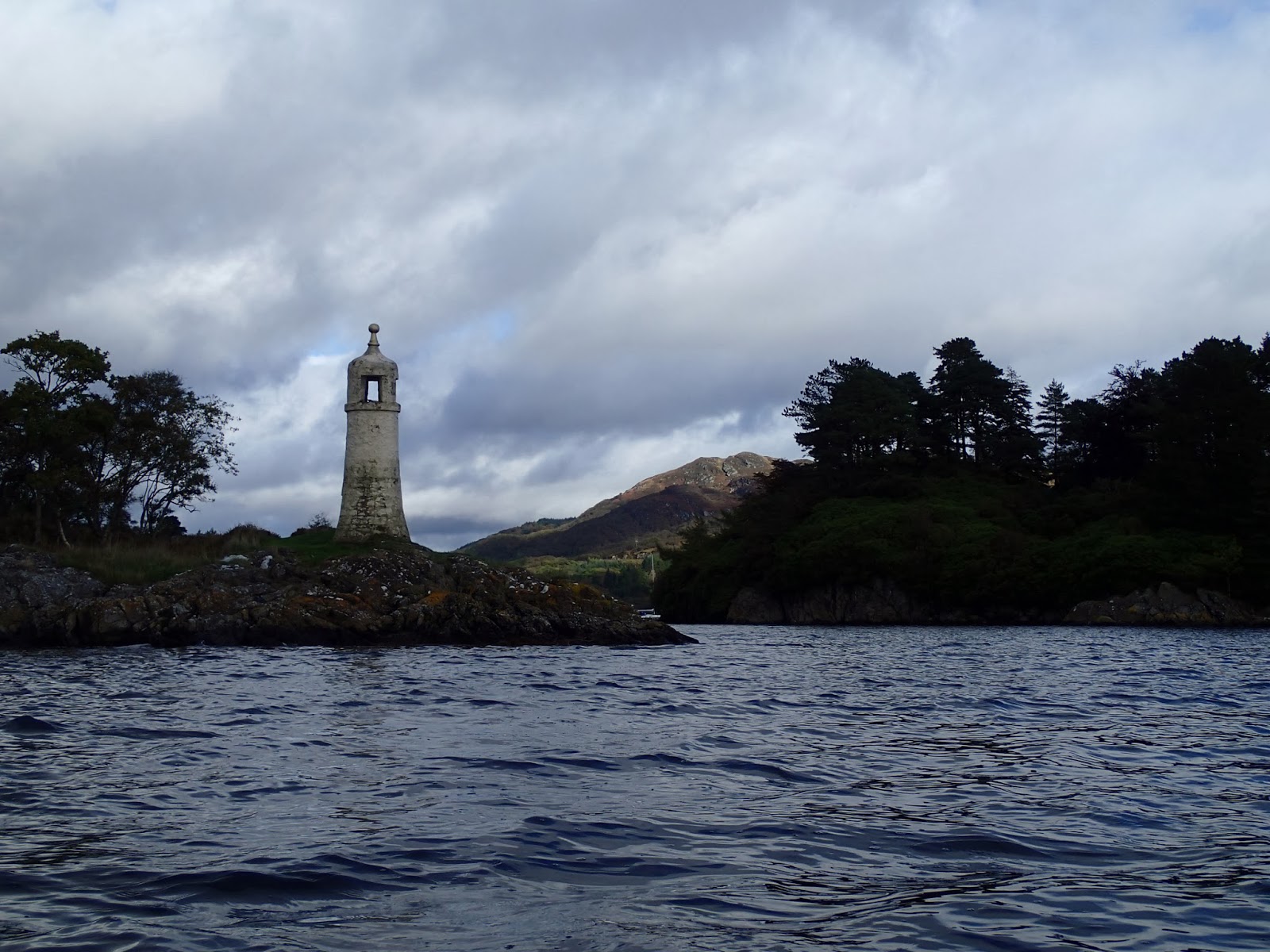 This small but distinctive lighthouse stands on a small point on the shore, Eilean Dubh is to the right with the entrance to the anchorage between.  In spring Eilean Dubh is a noisy place as there is a large heronry in the big trees.

Looking back over some images from last year brought back lots of memories of great days in the outdoors. Mountain days, low level walks, watching the turn of the seasons and sea kayaking - I was blessed with some superb days. Trying to pick one outstanding day wasn't easy - but I was drawn to the sea kayak trips as there had been quite a few memorable days and journeys. The Small Isles, paddling along Ardnamurchan in tricky conditions, multi-day trips in the far northwest and a the fulfilment of a long-held hope to round Point of Stoer were all superb experiences. The image below however, seems to encapsulate one of the best days I've ever had in Scotland's great outdoors...... 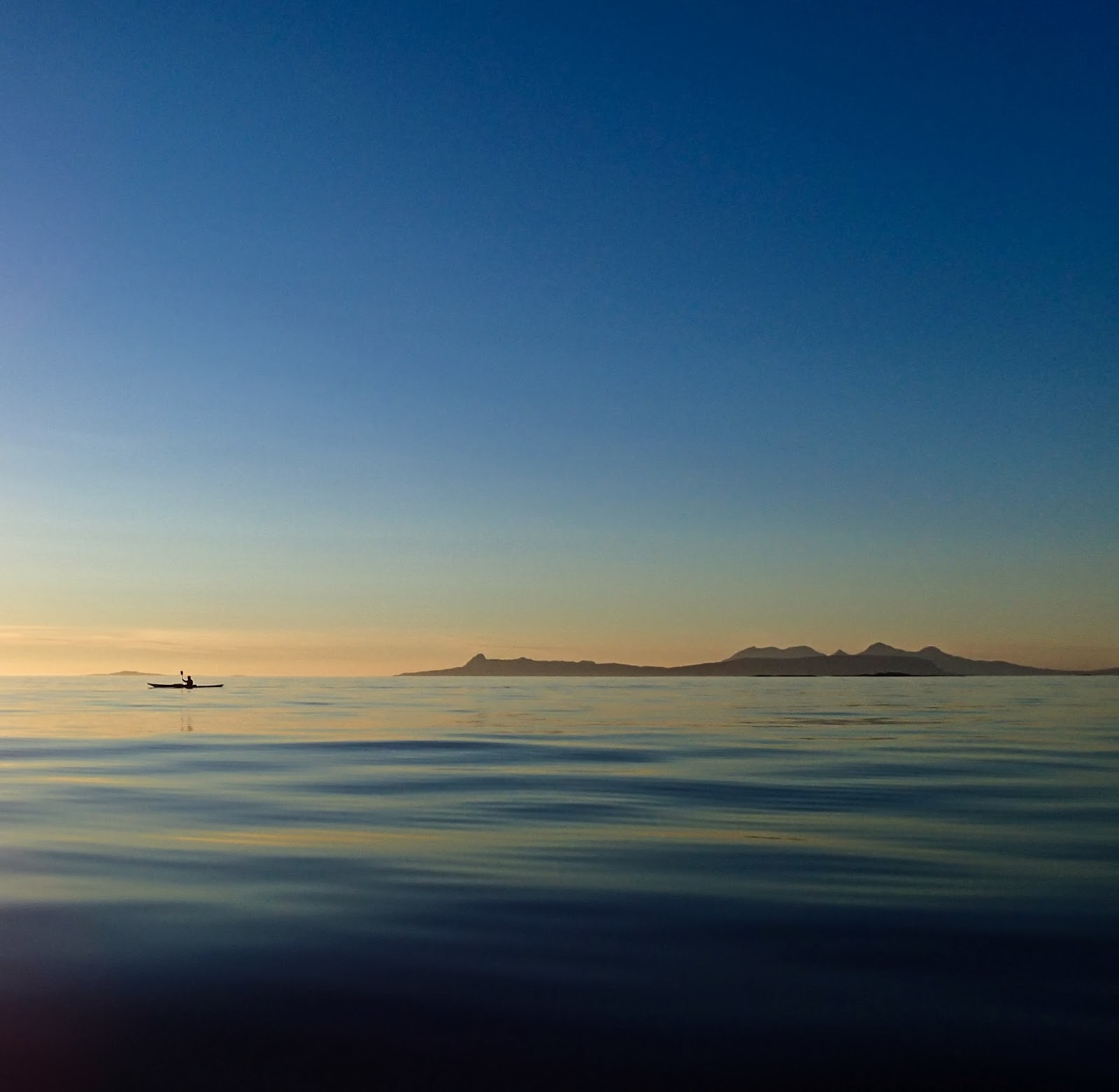 Taken towards the end of a February day on the Sound of Arisaig whilst paddling back towards Glenuig with the islands of Eigg and Rum on the horizon.  It had been a day of superlative paddling with good friends in perfect conditions.  We had landed on several white sand beaches and some of us had swum (briefly!) in the sea - in February, in Scotland - in warm sunshine and yet the ground in the shade had been hard frozen and frosty.

We were to be treated to a sunset of rare beauty and would round off the day with a fine meal at the Glenuig Inn.