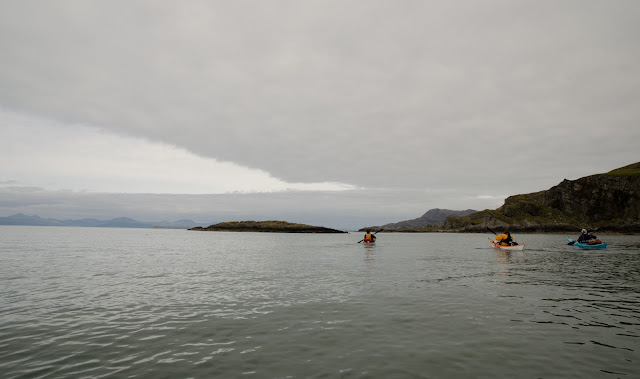 As we paddled out from Glengarrisdale towards the north tip of Jura and the Gulf of Corryvreckan, a narrow strip of clear sky broke the uniform grey of the cloud cover; and seemed to point the way to the Corryvreckan. 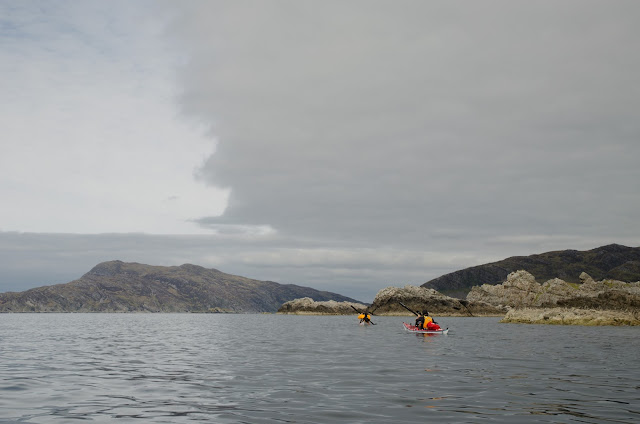 The island of Scarba gradually emerged as we neared the strait, the sky continued to clear and the temperature soared.  Most of us found tiny bays to land in to remove layers of clothing! 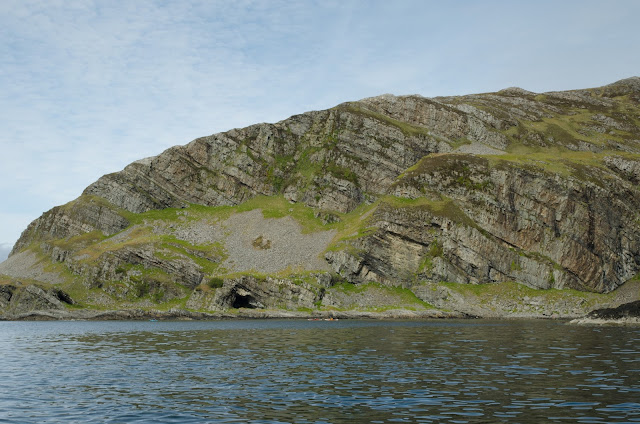 The scale of the west coast of Jura is impressive, and certainly this northern section doesn't disappoint - our kayaks were dwarfed by the outcrops of tilted rock layers.

We had timed our arrival at this critical point of our journey to take advantage of the brief period of slack water at the end of the flood, then the start of the east-going ebb.  The previous night's full moon was an obvious reminder that we were right on spring tides, and that such slack as there was would be fleeting.

We reached a point where we could see into the narrow strait and it was immediately obvious that the last of the flood was pushing through from the east and encountering a larger body of water on the seaward side.  A standing wave was breaking almost from shore to shore on an otherwise flat calm stretch of water marked only by the swirls of tidal offshoots.

Neither Maurice or Sam had been here before, and when Maurice saw the rolling wave, his only comment was "Tell me we're not going through that?!".  His apprehension was well-founded, the Corryvreckan is a very active piece of water, and also features one of the world's most violent tidal whirlpools.

We reassured Maurice that the wave would drop away as slack water occurred, and sure enough it slowly split into two sections and dissipated, peeling back to the shore on each side of the strait.  I think Sam was actually a little disappointed that we weren't hammering through at peak flow with huge seas......maybe some other time! 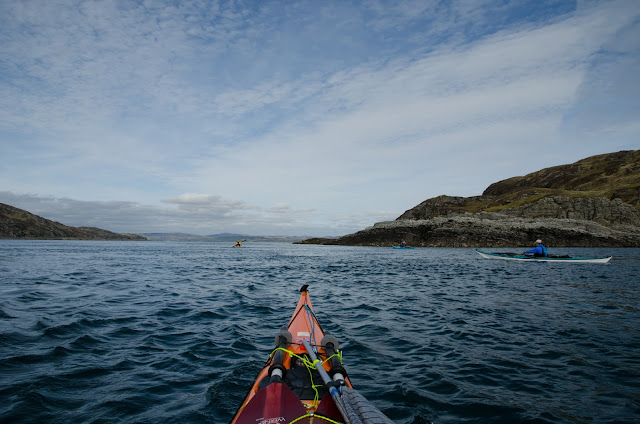 The narrowest part of the channel is less than 2km long, but takes a huge volume of water through on each tide.  We reckoned that the actual slack water was less than five minutes before we began to feel the insistent pull of the ebb drawing us into the narrows.  A few swirls and hydraulic cushions began to appear as the ebb started to establish but in the absence of swell things were very gentle.

Our timing had been good - we drifted through with little drama under a clearing blue sky.  Just before we entered the channel Douglas had stopped at a small bay on the Jura shore where he met some Dutch sea kayakers who'd passed through in the opposite direction at the last part of the flood tide.  Remarkably, they didn't seem to realise where they'd been paddling.....or the state of the tide. 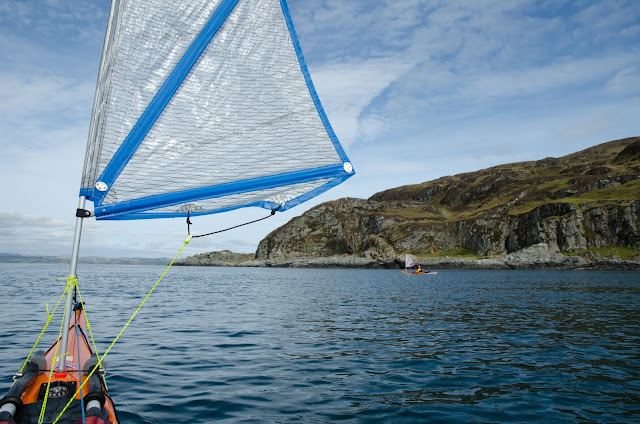 Emerging from the narrowest part of the Gulf, we felt a small breeze at our backs and hoisted our sails.  Just ten or so minutes after slack water, and we were being propelled into the Sound of Jura at 8kph without paddling.....it was what we hoped would be the start of a fast ride down to our finishing point at Carsaig Bay.
Posted by Ian Johnston at 21:09 4 comments: