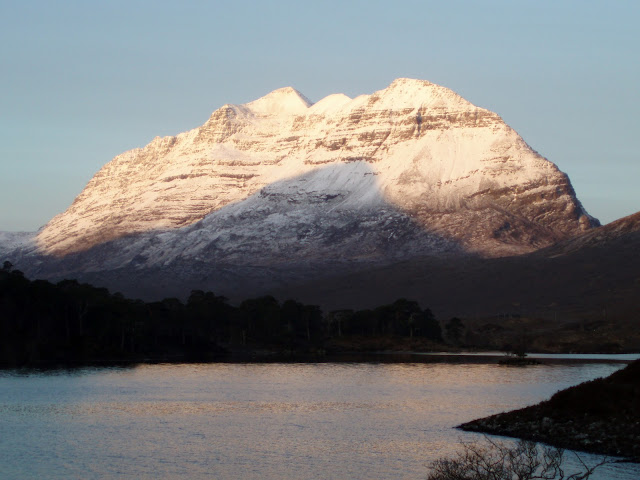 Looking through some images on a memory stick, I came across two from an outstanding day's hillwalking in February 2006.  I'd set off from Kinlochewe well before dawn on a clear, frosty morning and walked down the Torridon road.  Approaching Loch Clair as dawn was breaking, I detoured to the loch shore to take this picture of Liathach (the grey one).  This viewpoint is a popular one with photographers but I had it to myself that morning while the whole mountain was bathed in pinkish sunlight.  In the shadows where I was, my fingers were sticking to the camera in the frigid air - which may have gone some way to explaining why nobody else was around!

Liathach is a tremendous hill, steep and challenging with multiple summits.  It has its standard routes but also some superb quieter routes to the summit ridges.  Composed of Torridonian Sandstone and quartzite, the whole mountain is, in geological terms, upside down with older rock overlaying the younger - an amazing thought. 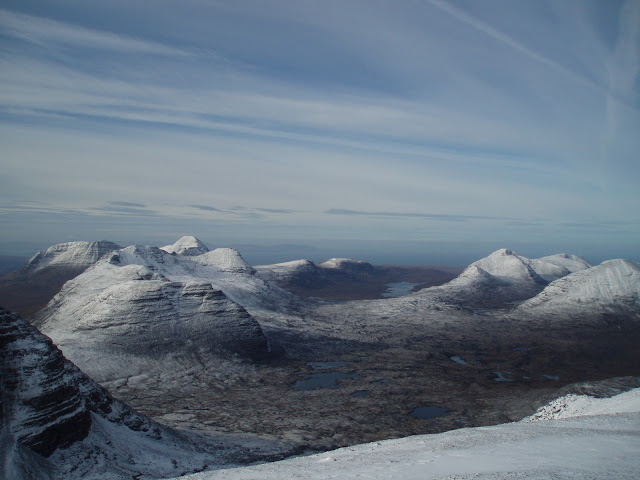 Liathach wasn't my objective that day though.  I headed past the eastern end of Liathach and up into Coire Mhic Fhearchair (Farquharson's Corrie), also known as Triple Buttress Corrie from the stupendous rock architecture on the corrie headwall.  A very steep climb of a further 550 metres (you earn your hill summits in Torridon as nearly all routes start from near sea level) got me up above 1000 metres on Beinn Eighe (hill of the file).

The view from here is simply breathtaking.  A sweep of bold, primeval looking hills backed by the blue of the Minch and spattered with glistening lochans.  Just magical.

This view shows (from left to right) the end of Sail Mhor (the big heel) which is the western summit of Beinn Eighe and forms one of the arms of Coire Mhic Fhearchair; the Corbett of Beinn Dearg (red hill) and beyond to the distinctive chisel summit of Mullach an Rathain, part of Beinn Alligin (jewelled hill).  Across the trench of Loch a' Bhealaich (loch of the pass) is another Corbett, Baosbheinn (wizard's hill) and on the far right, Beinn an Eoin (hill of the birds).

All evocative names for hills of great individual quality. The memory of that view is as clear as the winter air  near the summit of Beinn Eighe.

I turned northeast to walk the quartzite ridges of the "hill of the file".  Soon I was in a strange mist through which the sun shone, making everything appear soft and pale.  No more photos,but a magical and strange experience.  By the time I reached the base of Beinn Eighe near the road I was very tired and it was just about dark.  All along the final few kilometres of road back to Kinlochewe my headtorch picked out the golden reflections in the eyes of Red Deer browsing the grass at the roadside.

Days like these; they live with you for ever.
Posted by Ian Johnston at 19:07 5 comments: 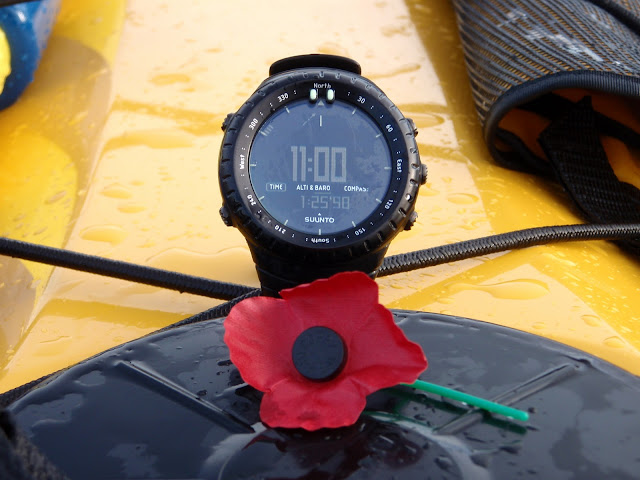 I'm away from home at work this November, but last 11th November I was paddling between Kyle and Plockton.  The day was calm and still, perfect for a moment of quiet reflection at 1100, the date and time at which the Armistice brought the carnage of the First World War to a close in 1918.

The Poppy which grew in such profusion on the battlefields of Flanders was adopted as a symbol of remembrance and it continues to be a resonant image both in the UK and elsewhere, worn to remember those who have lost their lives in the service of their countries in all wars.

Today at 1100, our ship in common with thousands of other places and millions of other people will observe a two minute silence ; a simple Act of Remembrance.

"They shall not grow old as we that are left grow old
Age shall not weary themor the years condemn
At the going down of the sun, and in the morning;
we shall remember them"
Posted by Ian Johnston at 06:33 No comments: