A look back to winter - granite and blue sky 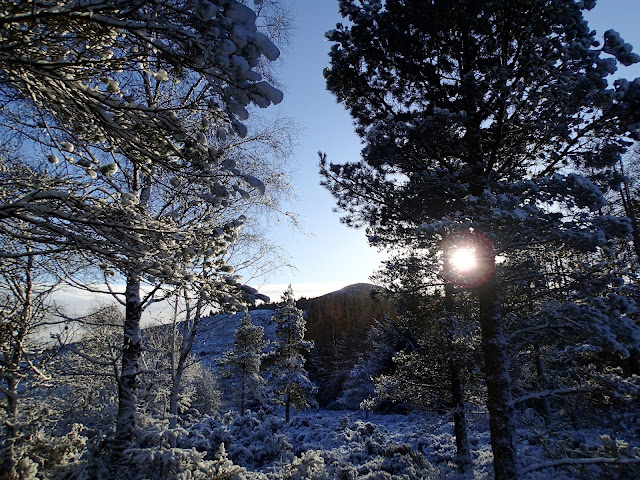 The low winter sun was just about clearing the summit of Millstone Hill at midday; the air among the trees frigid, still and sharp.  I found myself moving slowly and carefully, subconsciously tying not to break the delicate silence. 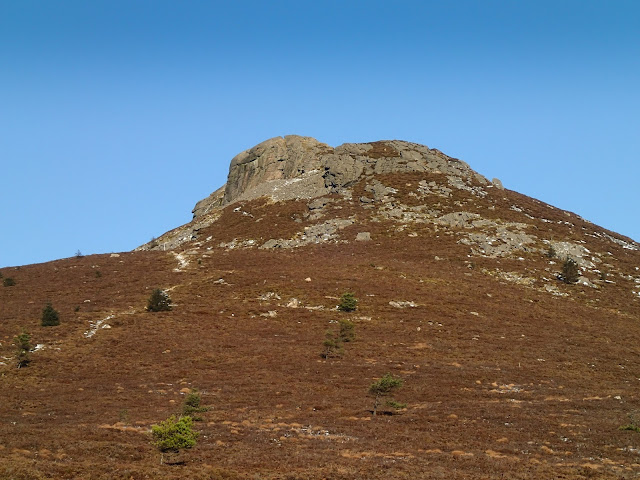 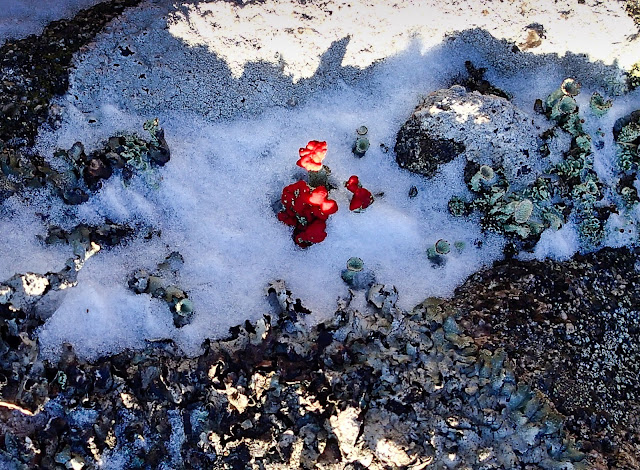 ....although in the shade the snow still clung.  A tiny lichen caught the eye, strikingly scarlet in a monochrome miniature landscape and a good excuse to pause on the climb. 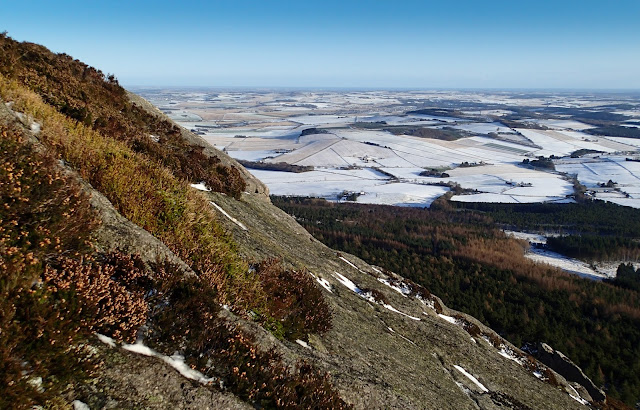 There are a few routes by which to climb to the top of the granite boss forming the Mither Tap - you can take one of the relatively easy paths or try finding your own route up slabs of varying challenge.  The rock is rough and offers good friction, but these slabs are a different prospect when wet or icy! 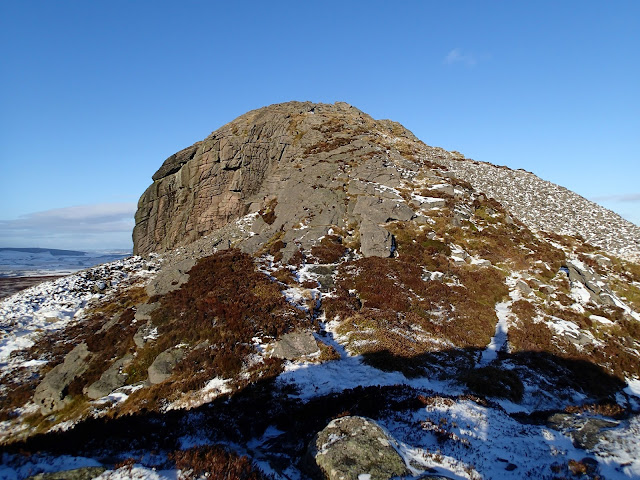 The Mither Tap is a "proper" little summit, it's small, well-defined with steep drops....... 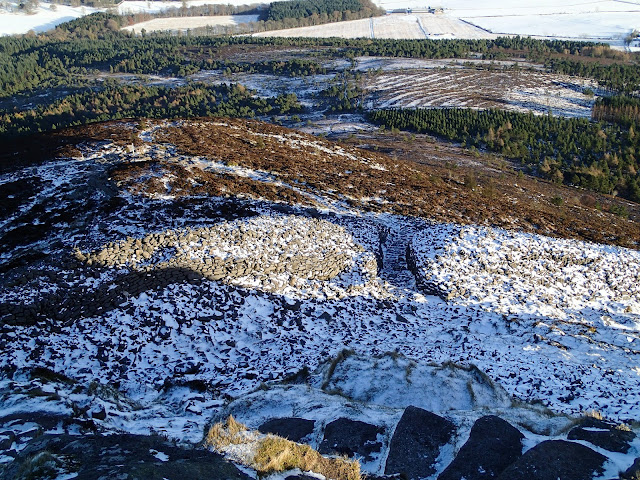 To the east, the remains of the Iron Age hillfort can be made out - massive tumbled walls and a paved entranceway 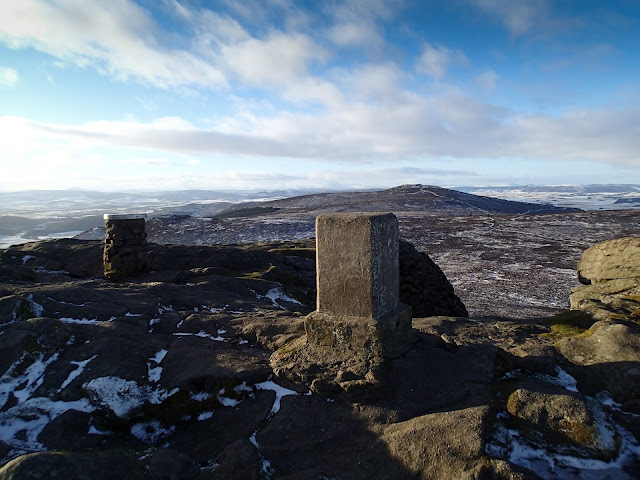 To the west, the highest point of Bennachie, Oxen Craig, is the foreground to a wide skyline filled with the distant and snow-covered Cairngorms.  Bennachie demands a fair effort for such a small hill, but the climb is well rewarded!
Posted by Ian Johnston at 20:37 2 comments:

Millstone Hill and Bennachie - a look back to winter 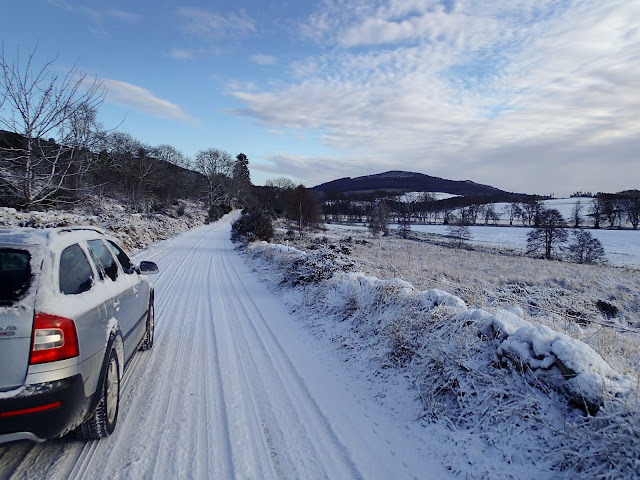 This is the last group of posts from a period in late November 2015 when a strong northerly airflow lay over Scotland bringing cold, windy  but mainly dry conditions. The strong winds continued for most of the month with persistent gale to severe gale conditions over the higher mountains and rough conditions on the sea giving little chance for sea kayaking.

There was still good walking to be had on the lower hills though, and a dusting of of overnight snow followed by a bright and sunny day was too good to miss.  My favourite local hill is Bennachie, one of the most distinctive hills in the north east of Scotland; I try to climb it at least once each period of leave from work and with the roads tricky in the early morning it seemed a great time to do so. 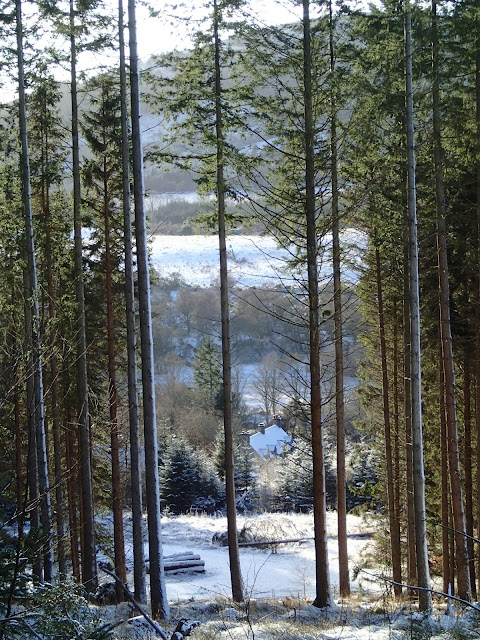 Although it involves a bit more effort, in my view the best route to Bennachie first traverses Millstone Hill, starting from the Donview car park.  This route climbs straight from the start with views opening up over the River Don below. 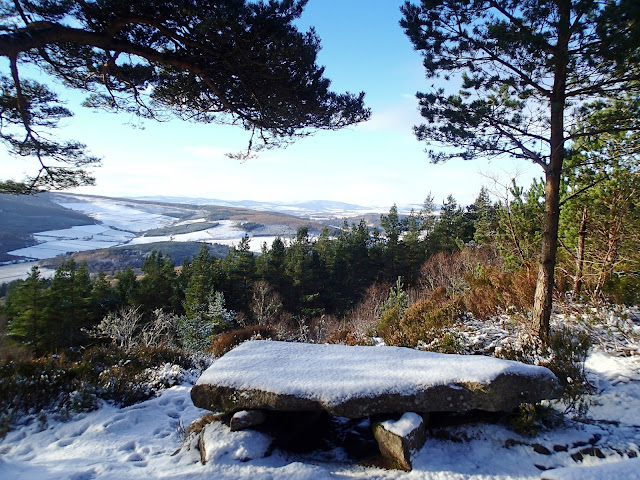 A granite bench near to top of the treeline offers superb views across the Aberdeenhire countryside - a good excuse for a break from the steep climb!

Soon enough the summit of Millstone Hill is reached and the view across to Bennachie is revealed. 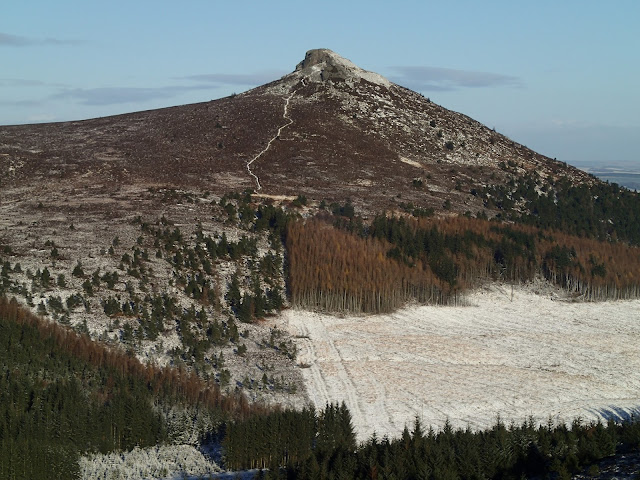 Although not the highest summit of the several which comprise Bennachie, the Mither Tap is by far the most prominent.  It's a hill which inspires tremendous affection in Aberdeenshire folk - an for me as so many others, the first sighting whether from road or perhaps on an incoming flight signals "home".

My onward route descends to the trees at the "Heather Brig", a dip between the hills, before climbing the path clearly visible straight towards the volcanic granite plug of the Mither Tap. 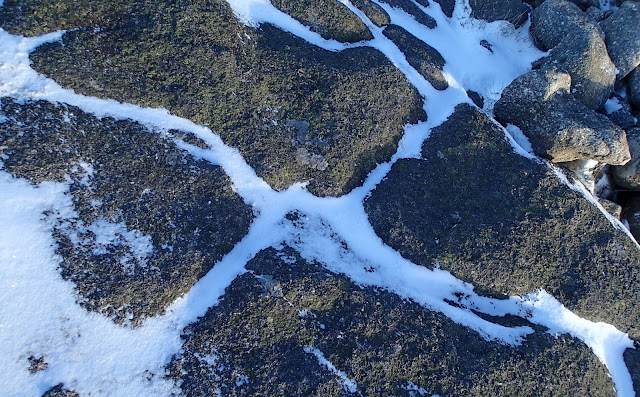 I made this climb on St Andrew's day, and so this saltire formed by snow being scoured across cracks in a granite slab seemed very appropriate 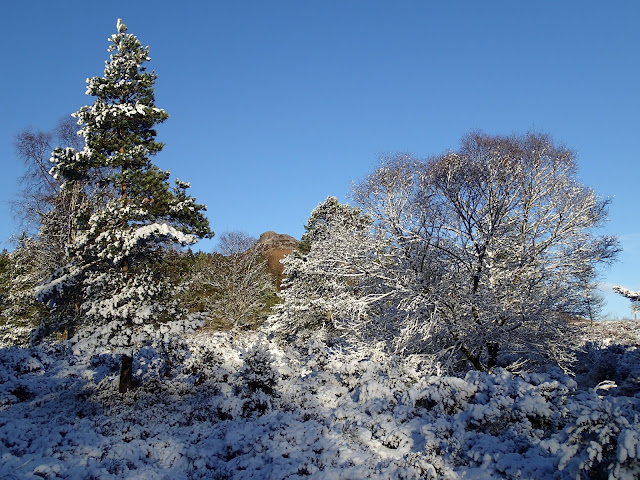 Down at the Heather Brig it was sheltered from the wind and the snow was lying where it had fallen, edging every branch against a blue winter sky - it was such a great day to be out on the hill.....
Posted by Ian Johnston at 20:27 4 comments: