December 2019 gave some superlative skyscapes, and the "dark days" of January have continued the theme. We were up and about before dawn on one morning in the middle of the month and noticed a pink flush to the sky - the show was about to commence.... 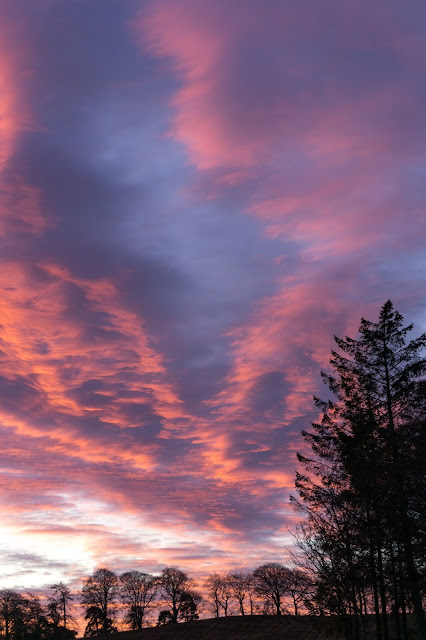 Flotillas of cloud were moving slowly overhead and were being lit from below with shades of pink and purple; the skyline trees were sharply silhouetted in contrast.  Beautiful as this was, what came next was totally unexpected. 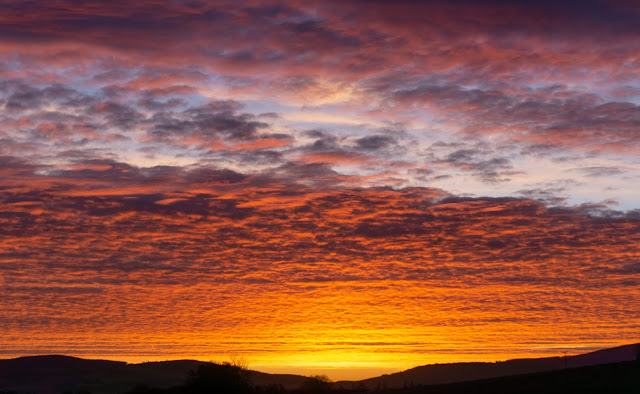 Almost suddenly the whole distant sky fired up in a stupendous riot of colour from intense gold through ambers and purples - it was absolutely stunning. 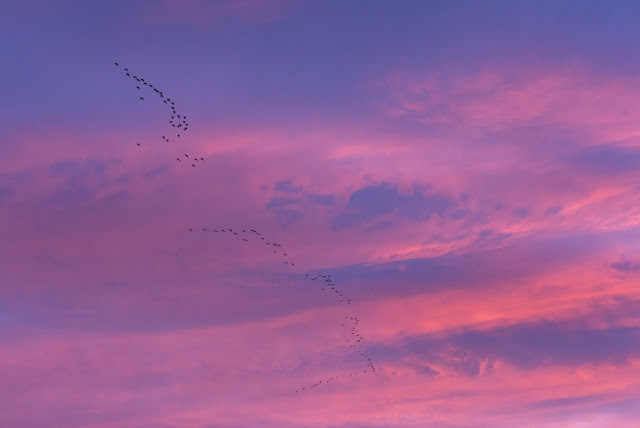 Overhead the skeins of geese moving out across the Aberdeenshire farmland trailed wild music to accompany the sunrise. 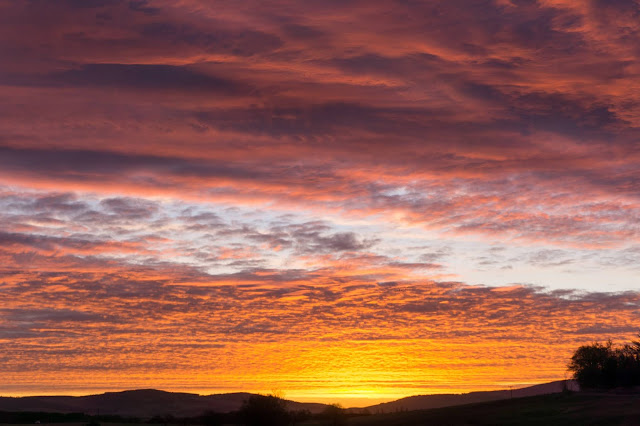 The effect lasted for less than ten minutes before fading to an "ordinary" morning, but what a treat it had been.
Posted by Ian Johnston at 18:30 2 comments:

Last sunset of the year

On the last day of 2019 Allan and I took advantage of a some sharp, clear weather and set out on on a walk across one of the local hills, Cairn William.  In fact, this hill is so local to Allan and Lorna that we were able to set out from their back garden! 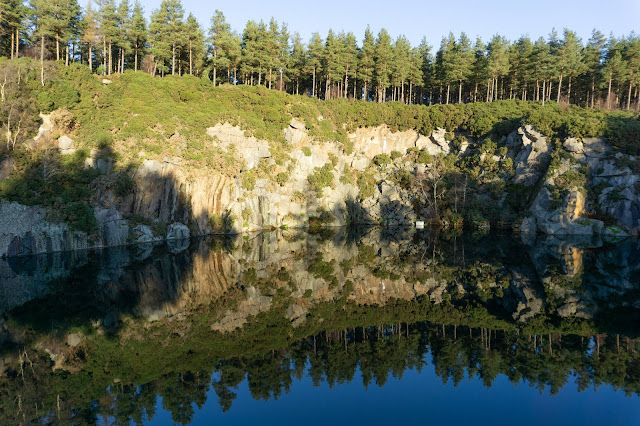 After a pleasant traverse among the pine woods Allan showed me the former Corennie Quarry - despite having lived in the area for many years I wasn't aware that this was concealed on a rocky hillside within the woods.  Now filled with water, it made a great reflecting pool on this still and clear morning.  The quarry was active in the late 19th century and was quite a hive of activity, there was a smithy and steam powered machinery in place and a trackway linking to the railway which linked Alford to Aberdeen.  Granite from the quarry was used both locally and much further afield - some being exported as far as Australia. 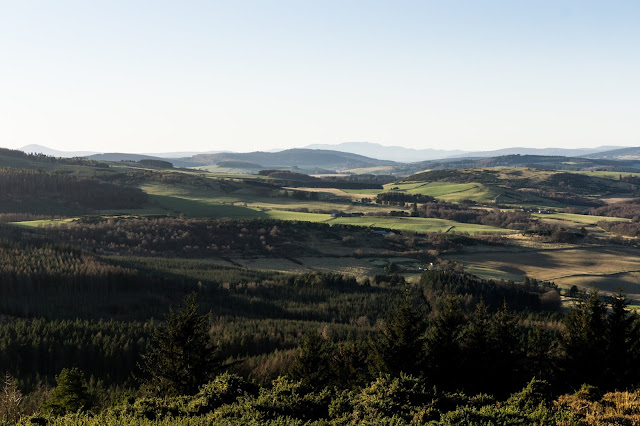 After exploring the quarry we climbed out of the forest and onto the open hillside.  Straight away the views begin to open up.... 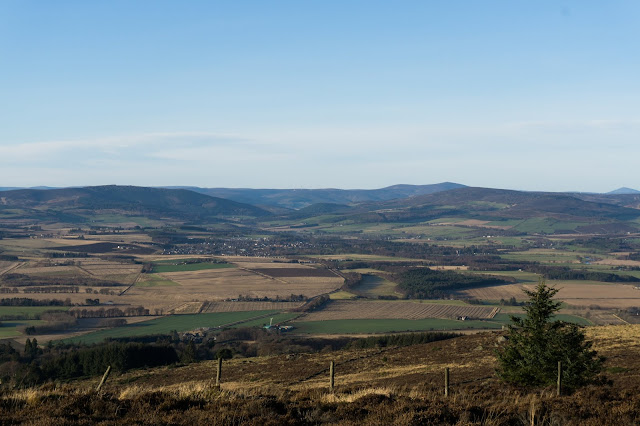 ...especially out over the Howe of Alford , across the village itself and beyond to the Correen Hills.  I could just make out where my house is in the view too! 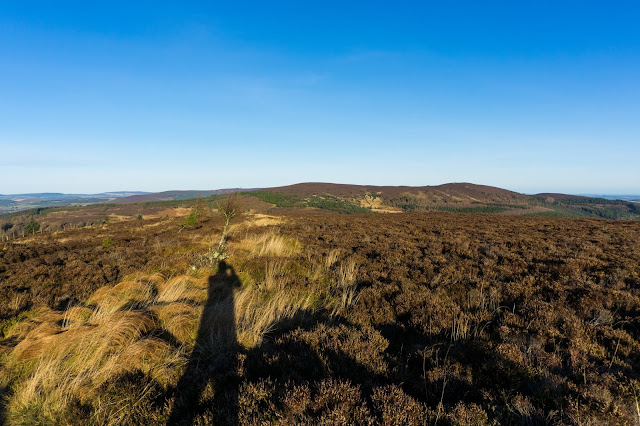 This last day of the year was bright with a low winter sun.  We'd chosen a route to put the sun at our backs and were glad of it.  Ahead the moor dips slightly before heading over to Cairn William.  We enjoyed striding out on a good path with wide views. 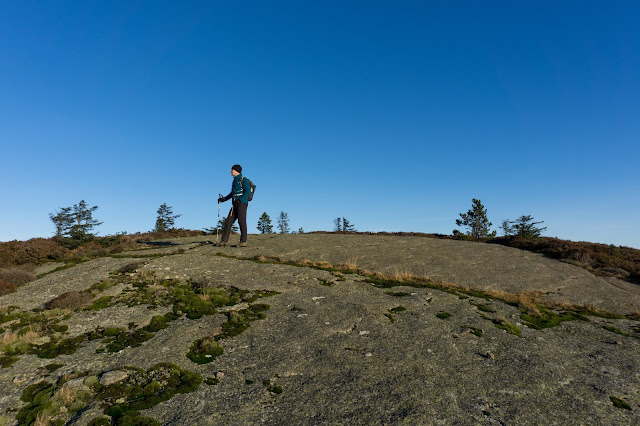 We were soon at the great domes of granite which form the summit of Cairn William.  At 448m/1470ft this isn't a high hill at all but does have good views, and as a bonus it's on our doorsteps! 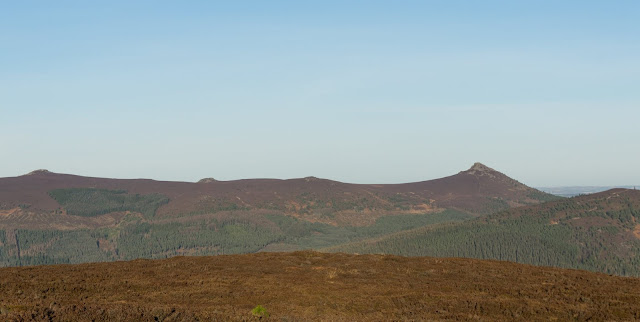 The view across to Bennachie is really fine, the distinctive shape seen from much of Aberdeenshire is one I instinctively look for in any skyline view.  We didn't loiter on the summit because a chilly breeze had started up, so we headed to the bealach between Cairn William and Pitfichie Hill to have a rest stop.  A quick climb up to the summit of Pitfichie Hill had us warmed up again - and at early afternoon we started back, the sun already low in the sky. 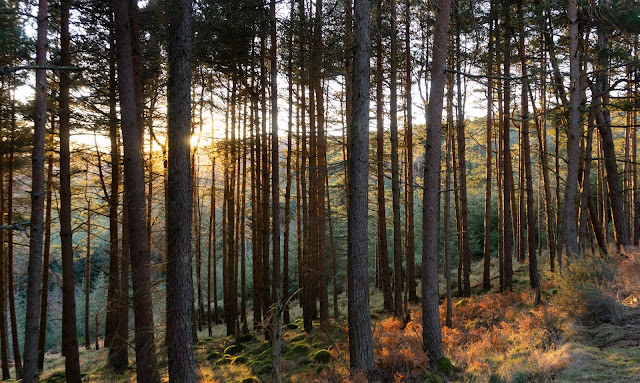 The low winter sun through the trees of the forest was creating some lovely light and shade patterns.  Lorna had walked out to meet us and found us taking a half step left and right to get the best image - as anyone who spends time with me on the hill or water will know, taking photos can take eat hours over the course of a day!

Walking back across the fields near Allan and Lorna's house we were treated to the most delicate of sunsets.  The last day of the year had started gold and blue, it would end in pink and lilac. 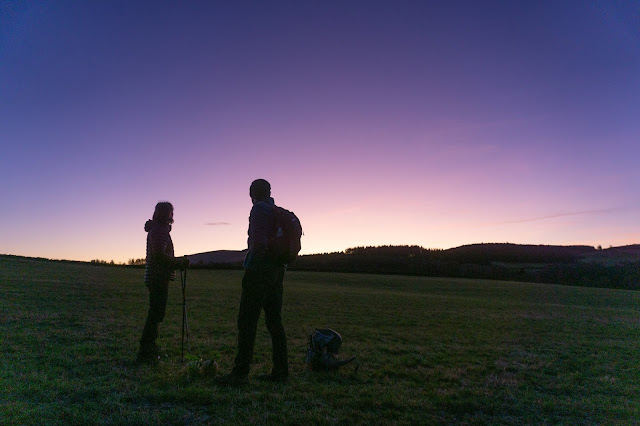 We stood until the cold moved us on, the colourful sky enhanced by a soundtrack of thousands of Pink Footed geese heading to Loch of Skene for the night.  What a superb way to end the year!
Posted by Ian Johnston at 10:17 2 comments:

The skyscapes above Aberdeenshire have been really spectacular over the last week, providing colour and drama in equal measure.

The last sunset of 2019 was a thing of delicate beauty washing the sky with mauve and pink - on a Hogmanay walk we stopped often just to watch as the quiet shades subtly changed. 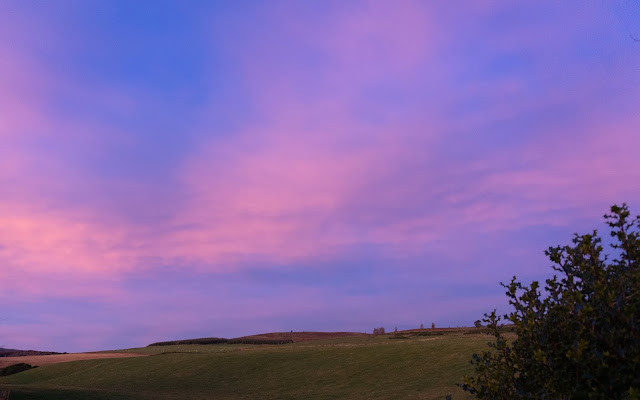 On 2nd January the palette seemed the same at dawn, but this is looking west - away from the sunrise.  To walk around the house was to experience something really special...... 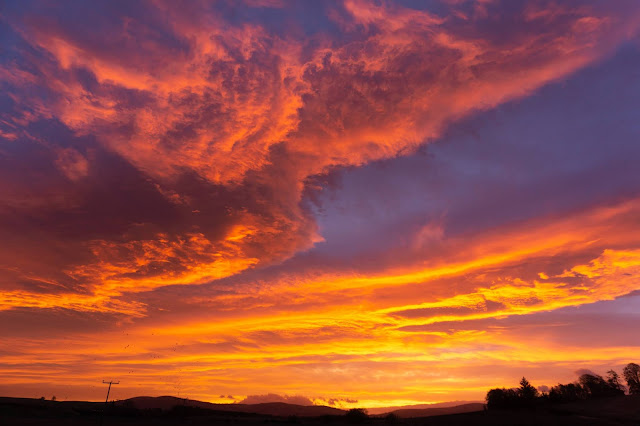 ...an absolute riot of pyrotechnic colour and dramatic cloudscape. 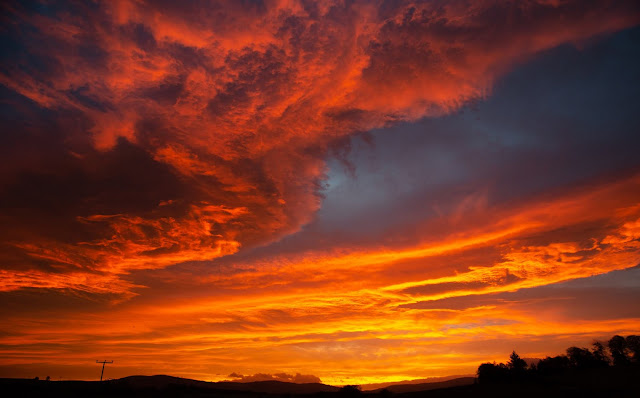 Unusually, the colour deepened as the sun rose and began to be diffused by horizon cloudbanks.  It was an absolutely gorgeous sight and seemed unbeatable.  Sunrises here in the northeast can be more spectacular than sunsets as we're closer to the east coast and have less high ground to block the view.  But this sunrise was to be matched in glory by the sunset of 5th January.

The western and southern parts of Scotland were generally overcast but over Aberdeenshire the edge of a weather front was really clearly defined in a cloud edge.  We were driving home from a trip south and watched as the sun fired this cloud front, colour raging across the sky...... 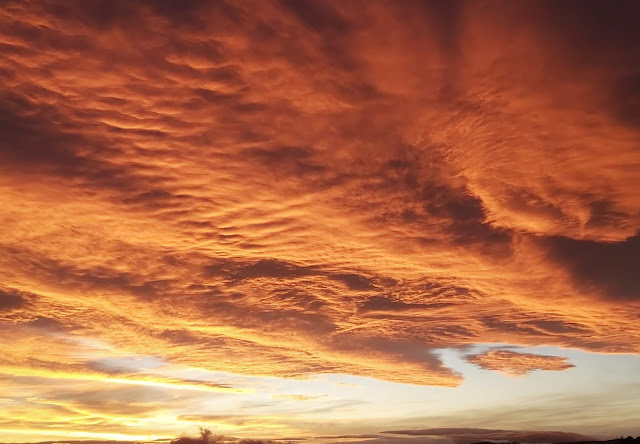 It was almost apocalyptic!  This series of images were taken on a smartphone and like those above have had no post-processing at all, they're just as they came from the camera. 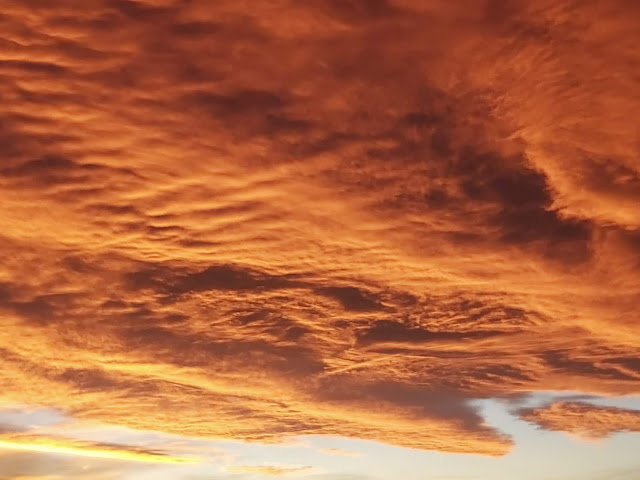 It's hard to put into words the sheer majesty of this skyscape.  We pulled to the side of the road to watch and to take photographs, as did most of the other cars travelling at that time, it was such a special sight.  Turbulence in the cloud was picked out by the low sun and the whole thing seemed to pulse and ripple with fiery intensity. 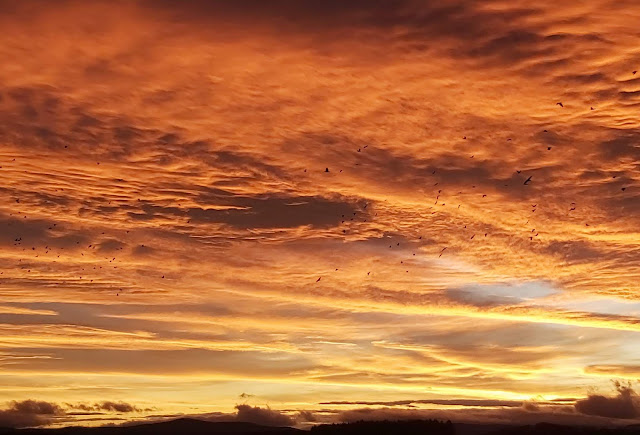 As the sun sank lower the colours changed subtly but the scale didn't diminish at all.  Flocks of Rooks wheeled up off the farmland as dusk rapidly approached and started to head for their tree roosts, which sparked a thought.  We drove on a little and stopped where we hoped to enjoy the last of the sunset. 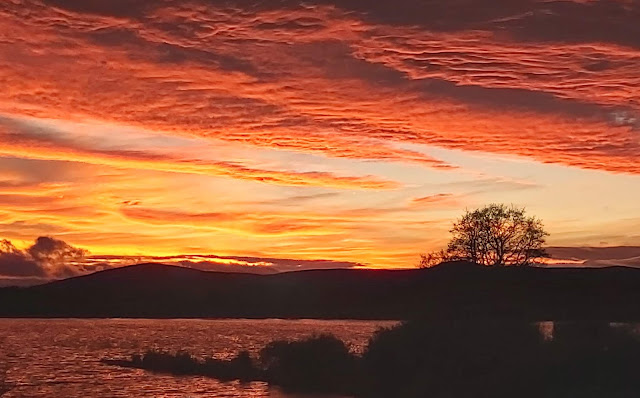 By the side of Loch of Skene we stood and watched the intensity of the colour burn from gold to copper to deep bronze and then to purple, all reflected in the water.  Then, the sound we'd hoped for to go with the visuals: geese in small groups and then hundreds and then in their thousands winged in from the surrounding countryside to roost safely on the water.  Long after the light had dimmed we heard their wild calls and splashes as they flew in.  Although too dark for photographs, the last of this exceptional sunset was still a wash of deep bronze an hour after sunset.  In these two sunsets and one glorious sunrise we'd been treated to a real show of Solas (light) in the middle of winter.  Nobody can convince me that this season is a dark and dreary time!
Posted by Ian Johnston at 21:37 2 comments: