The remarkable plant communities of a Florida saltmarsh

Our journey through the saltmarsh channels around Dutton Island was full of interest, but perhaps the most fascinating aspect was the remarkable plants which inhabit this ecosystem. 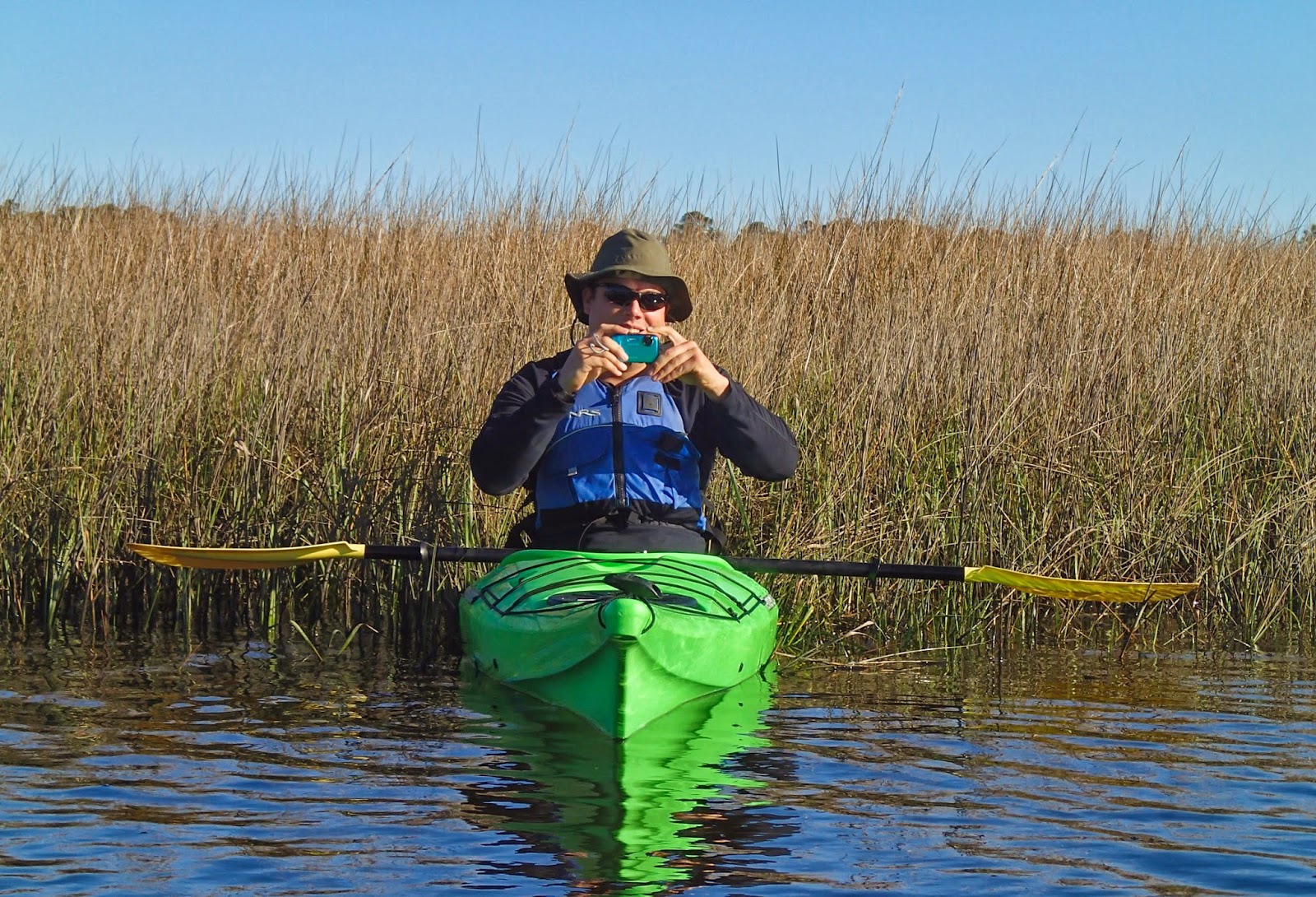 Seb resting with the stern of his kayak in the Spartina grass (Spartina alterniflora).  The dense stands of this grass appear, at first glance, unremarkable...... 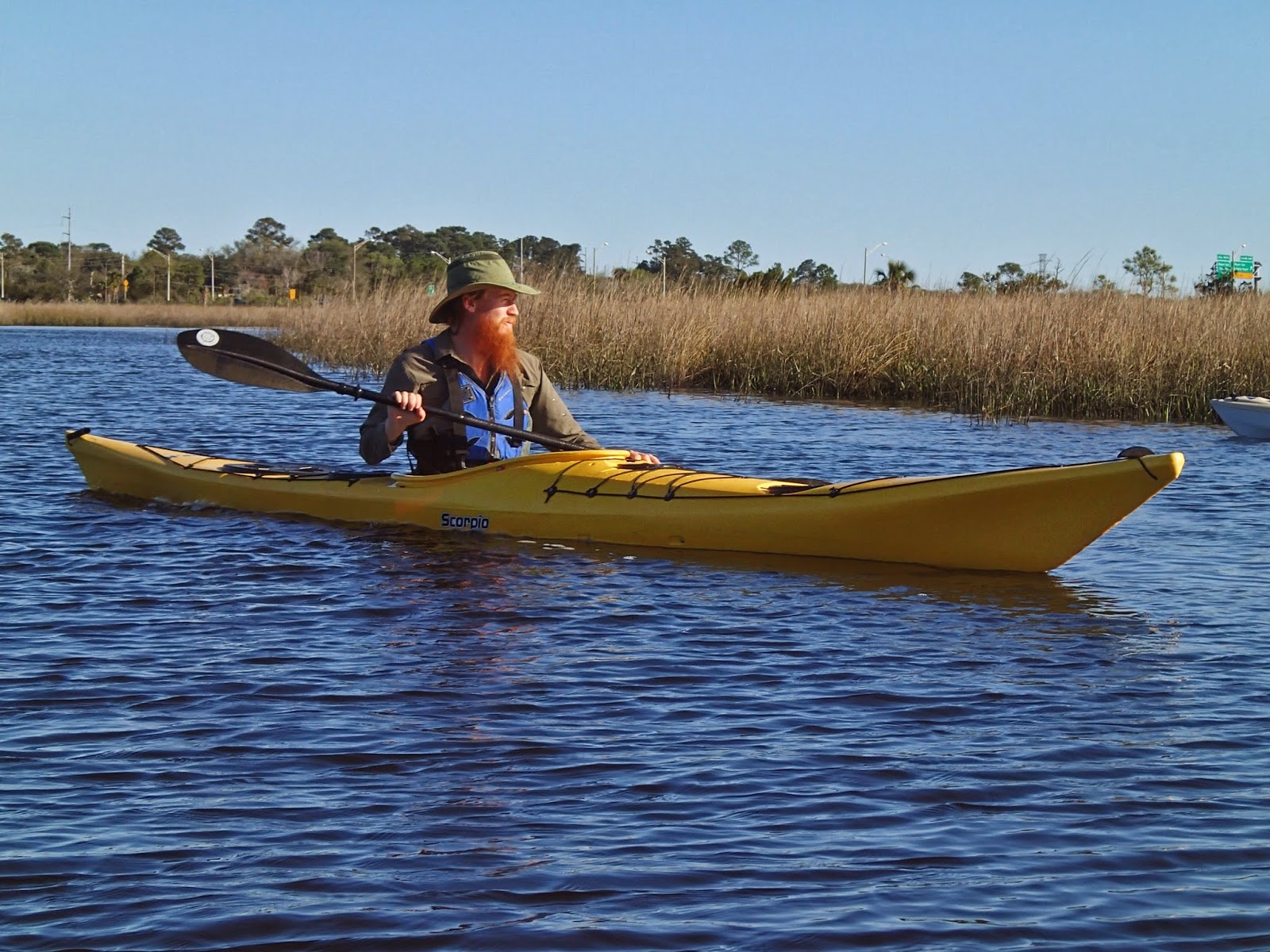 Our guide Matt is highly knowledgeable and has a real passion for this environment.  He explained that the Spartina Grass is a "keystone" species, one which actively alters its environment.  The development of a saltmarsh is dependent upon seeds of the grass floating to a place where it can take root.  It spreads asexually by rhizome systems and, over thousands of years, builds up a dense matrix of vegetable matter which in turn allows sediments and mud to build up, eventually forming areas of drying ground.

Any species in a coastal marsh has to be incredibly tough, tolerant to salt, wind and extremes of both moisture and temperature.  This colonising species allows the growth of other less tolerant plants and, eventually, dry land which can support stands of trees.  The trees provide nesting sites for many of the birds in the marsh as well as opportunities for land animals.

Below the water, the shelter and diminished flow allows the deposition of mud, perfect for the rich invertebrate life of the marsh and for Oysters.  The oyster beds filter the rich water and also provide a barrier to damaging storm surges.

All this from an unremarkable looking grass!

Along the edges of one of the man-made channels adjacent to the marsh the raising of the spoil banks has provided a leg-up for a surprising variety of trees, including Junipers adjacent to small Palms. 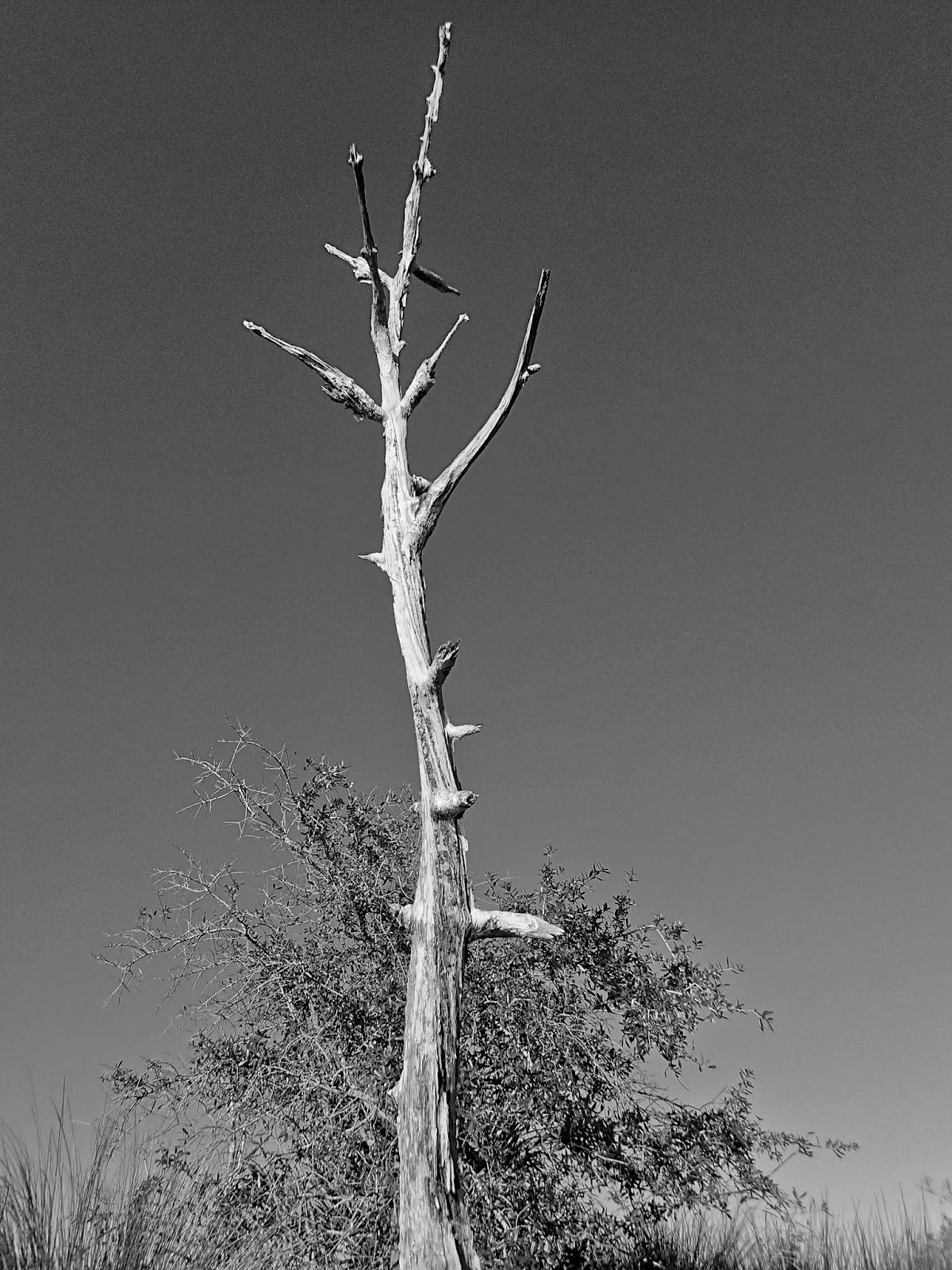 The trunk of a long-dead pine made a striking shape, and was drilled with holes drilled by a woodpecker, the standing dead wood still a valuable part of the whole ecosystem 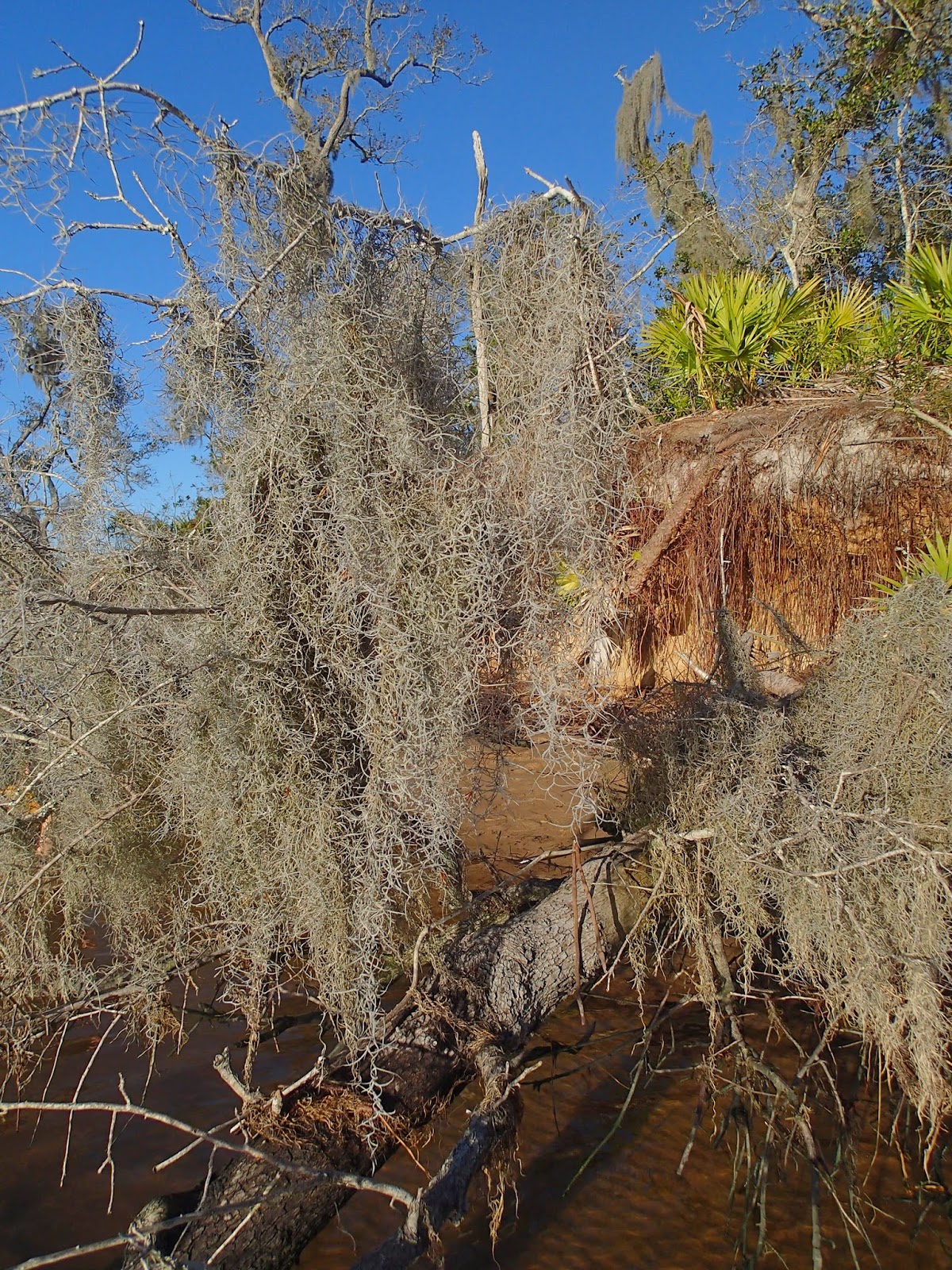 Back out along the Intracoastal Waterway, we stopped on a tiny beach for a short break.  A fallen tree here gave us a close-up view of another remarkable plant which festoons trees, particularly Live Oaks all across north Florida - Spanish Moss (Tillandsia usneoides).

It isn't Spanish in origin, nor is it a moss.  Resembling "old man's beard" lichen found in norther boreal forests, it isn't a lichen either.  This fascinating flowering plant is an epiphytic species - it takes all its nutrients and moisture from the air and from rainfall. Related to Bromeliads, the plant forms hanging pendants up to 6 metres long and does particularly well in the high humidity of Florida.  It doesn't harm the host tree, merely using it as a frame on which to grow, though sometimes the weight of Spanish Moss pendants can break off branches from trees.

The saltmarsh of Florida is a superb environment, and home to some truly remarkable plant species.  I'm very grateful to Matt for sharing his deep passion for and knowledge of this special place.

Paddling and Pizza - a day at Dutton Island

A visit to north Florida provided a great opportunity to break a long spell of work with a day paddling. Having convinced a group of colleagues that this would be a fun way to spend a Saturday afternoon and booked the trip, we then had a week when the weather was most untypical of Florida - single digit temperatures, a bitterly cold wind and lashing cold rain were the themes - in fact for most of the week Scotland was warmer than Florida!

The forecasts all agreed that the weekend would see much better weather, and so it proved. Saturday was a fine, pleasantly warm day - perfect for a paddle. We met Joe and Matt from First Coast Outfitters at the Dutton Island Nature Preserve and got sorted out with boats and kit along with the other folks booked on the tour. 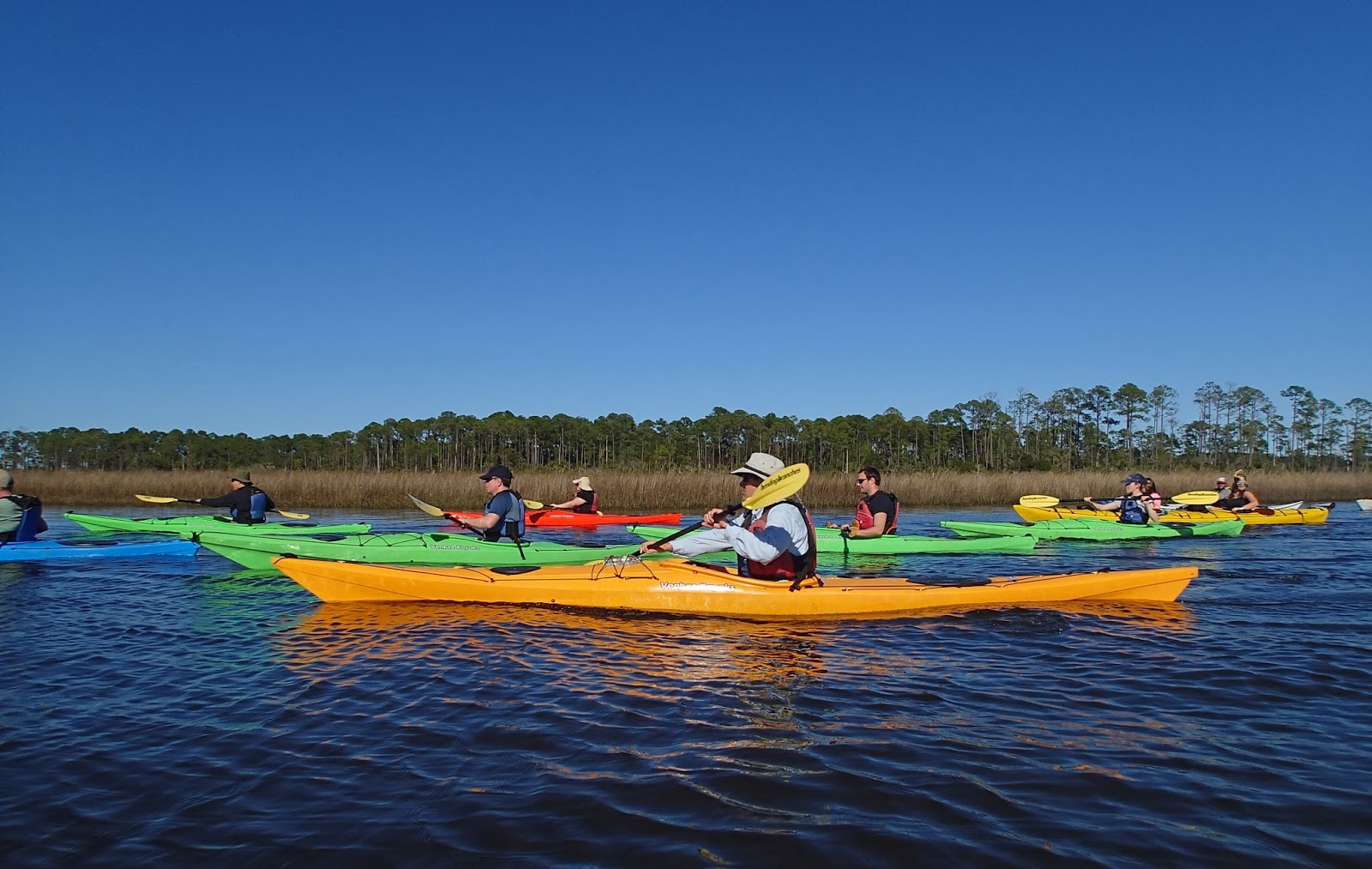 Soon we were out on the water and away from the attentions of "no see um" insects, midge-like pests which bite, but fortunately without the ferocity and lasting marks of the Scottish Midge!  At this time of year the water was surprisingly "bracing" despite the warm sun.

I've done this tour previously and it proved to be just as enjoyable as I'd remembered.  Our flotilla made a colourful sight in the bright sunshine as we paddled out...... 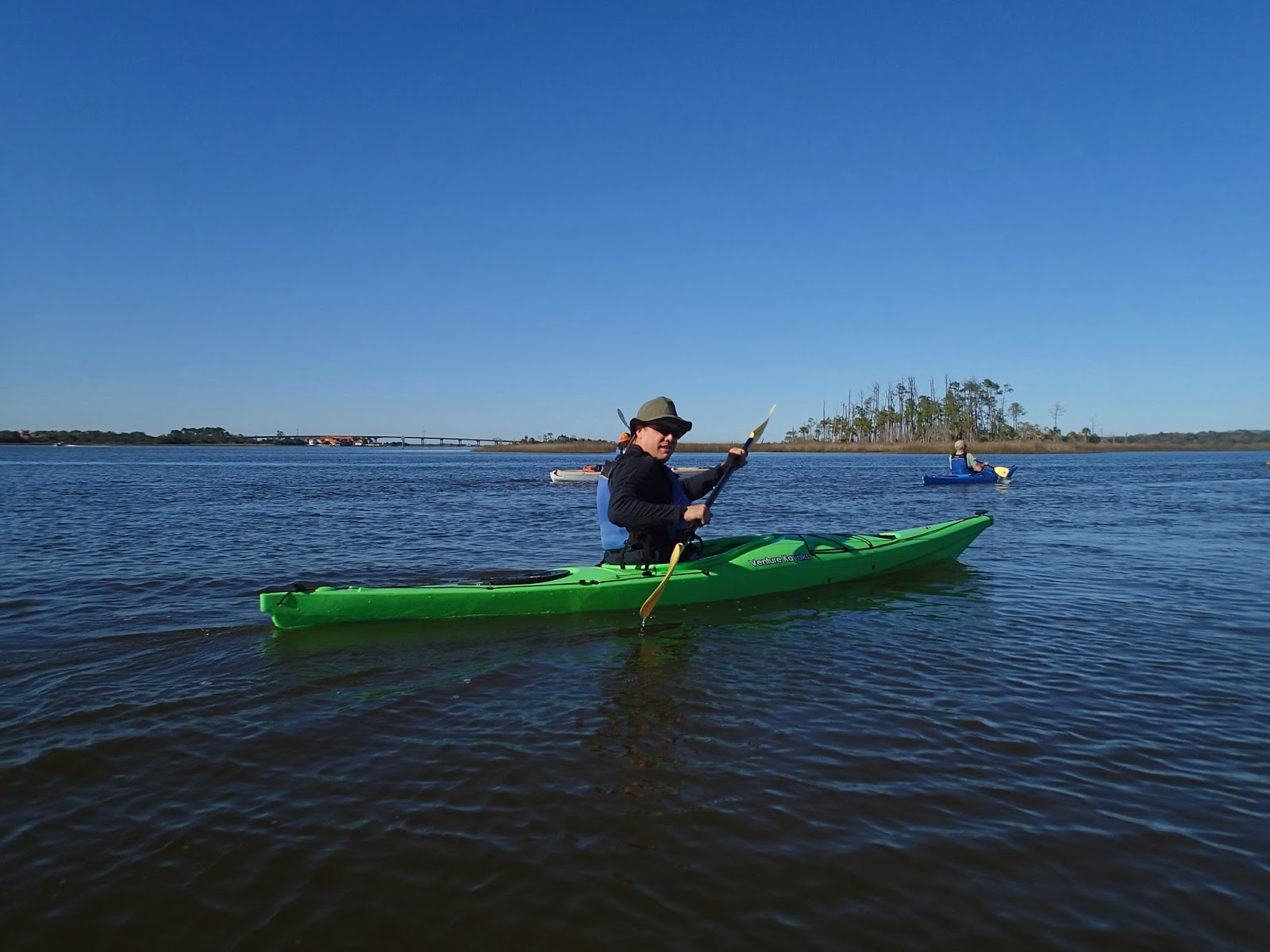 ...into the Intracoastal Waterway, the 3000 mile man-made channel along the Gulf and Atlantic coasts of the US eastern seaboard. 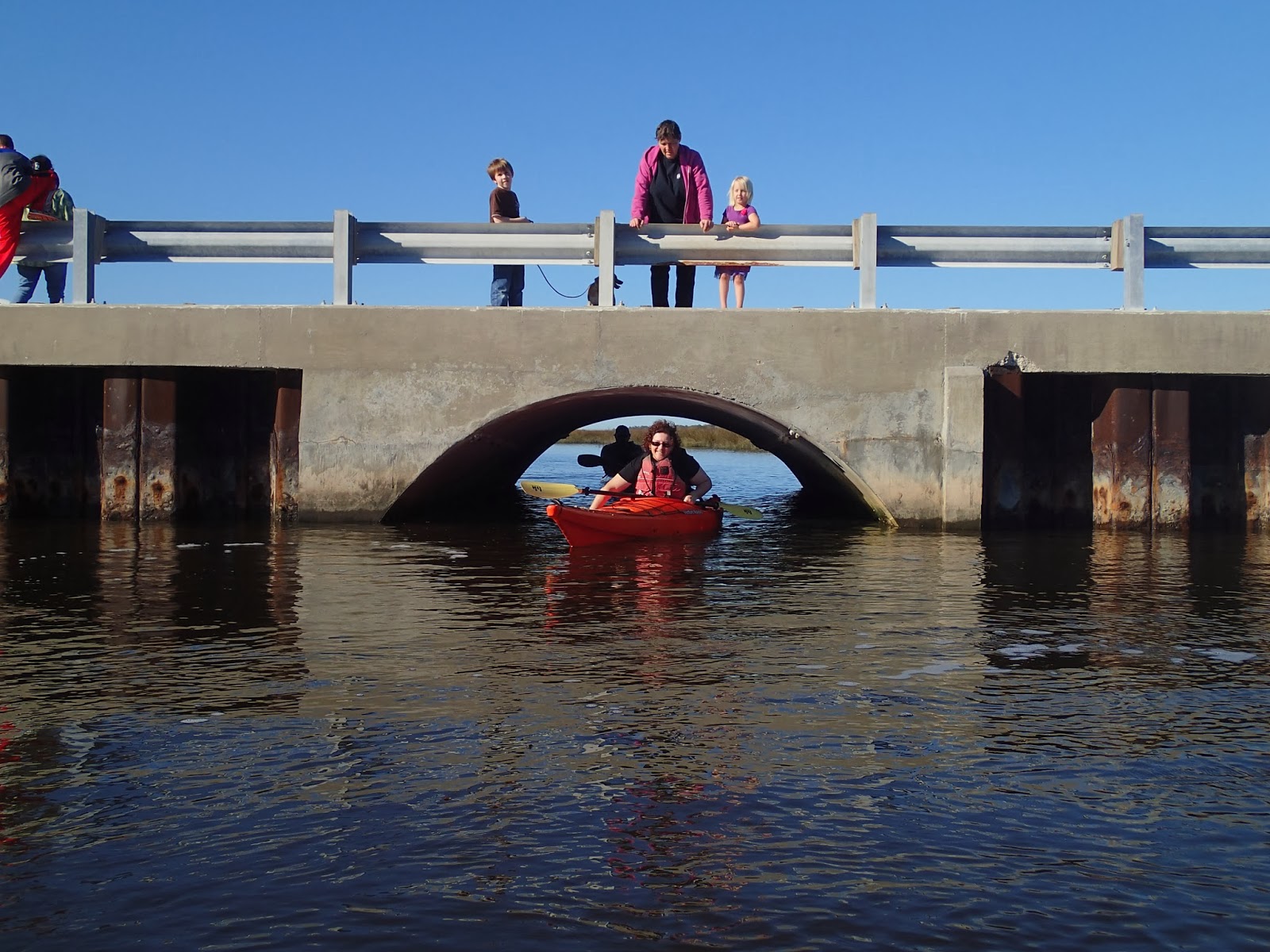 We made our way along a channel leading around Dutton Island, passing under the bridge carrying the small access road to the nature preserve - which required some contortions from the taller members of the group! 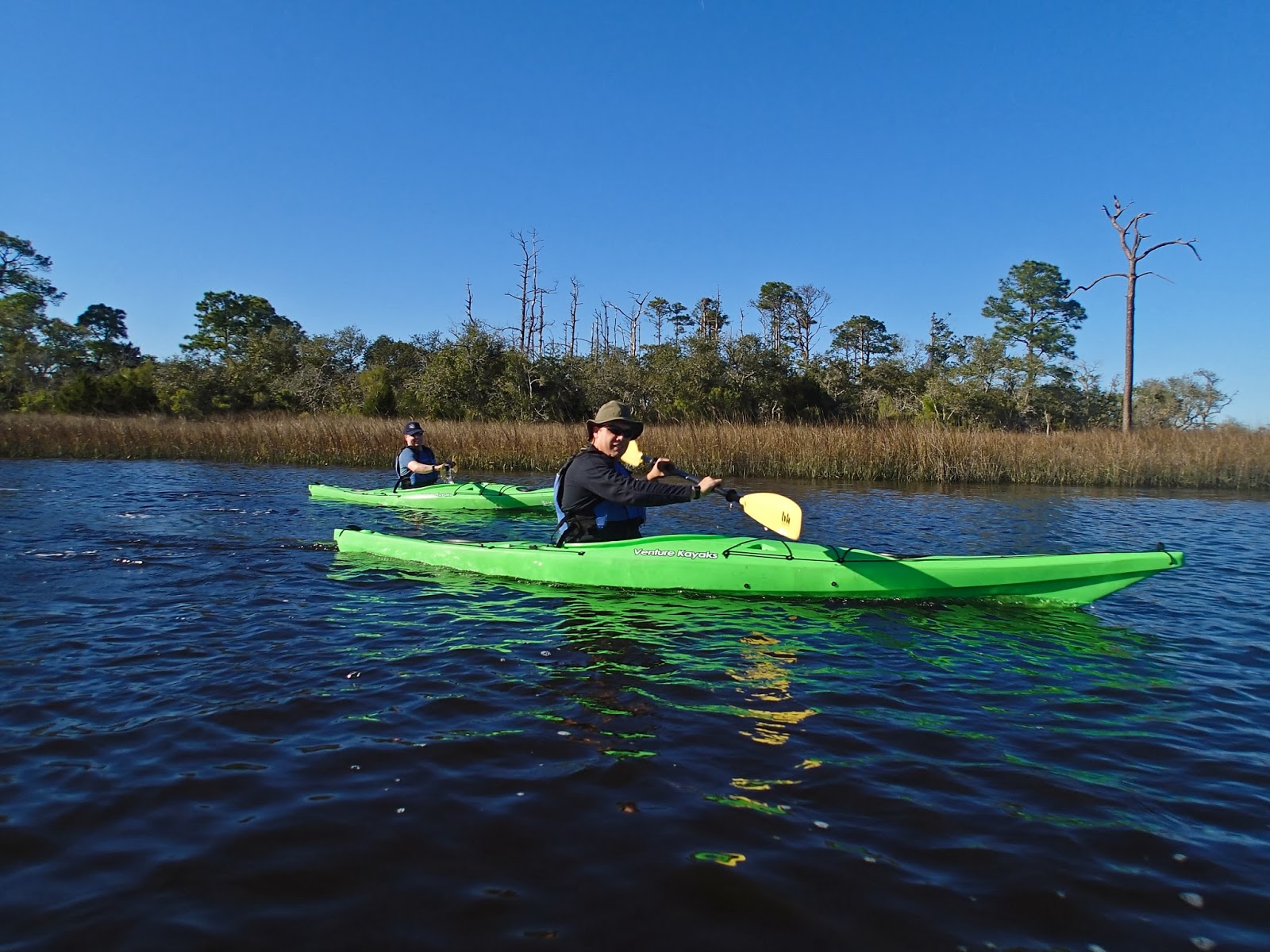 The intricate series of channels behind the island are interesting to paddle with plenty of wildlife too.  We saw Ospreys, Great Grey Heron, Black Vultures, Egrets and several species of wildfowl. 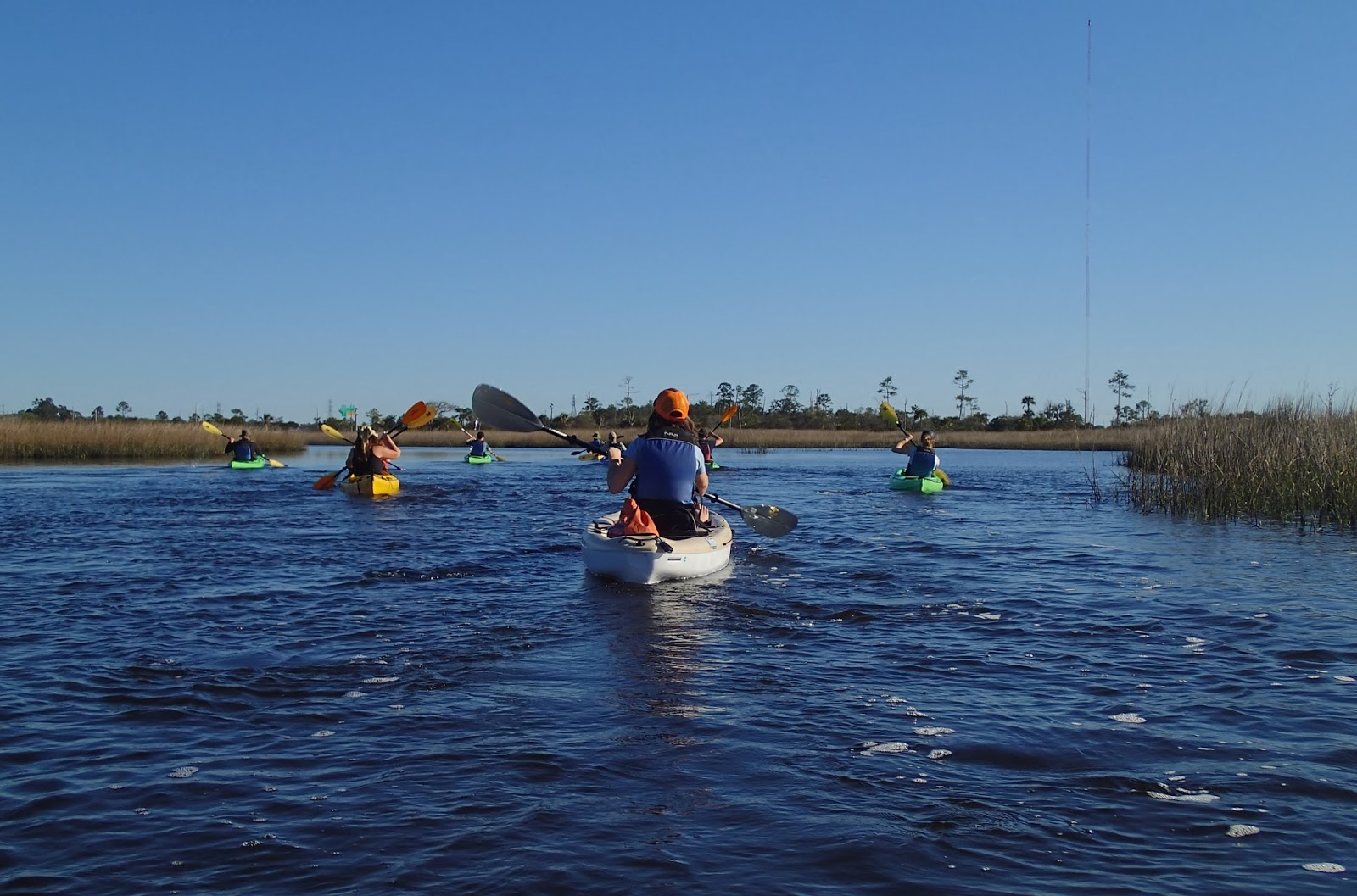 The channels were often narrow but sometimes widened out to give spacious views - the huge radio mast was a useful navigational reference point! 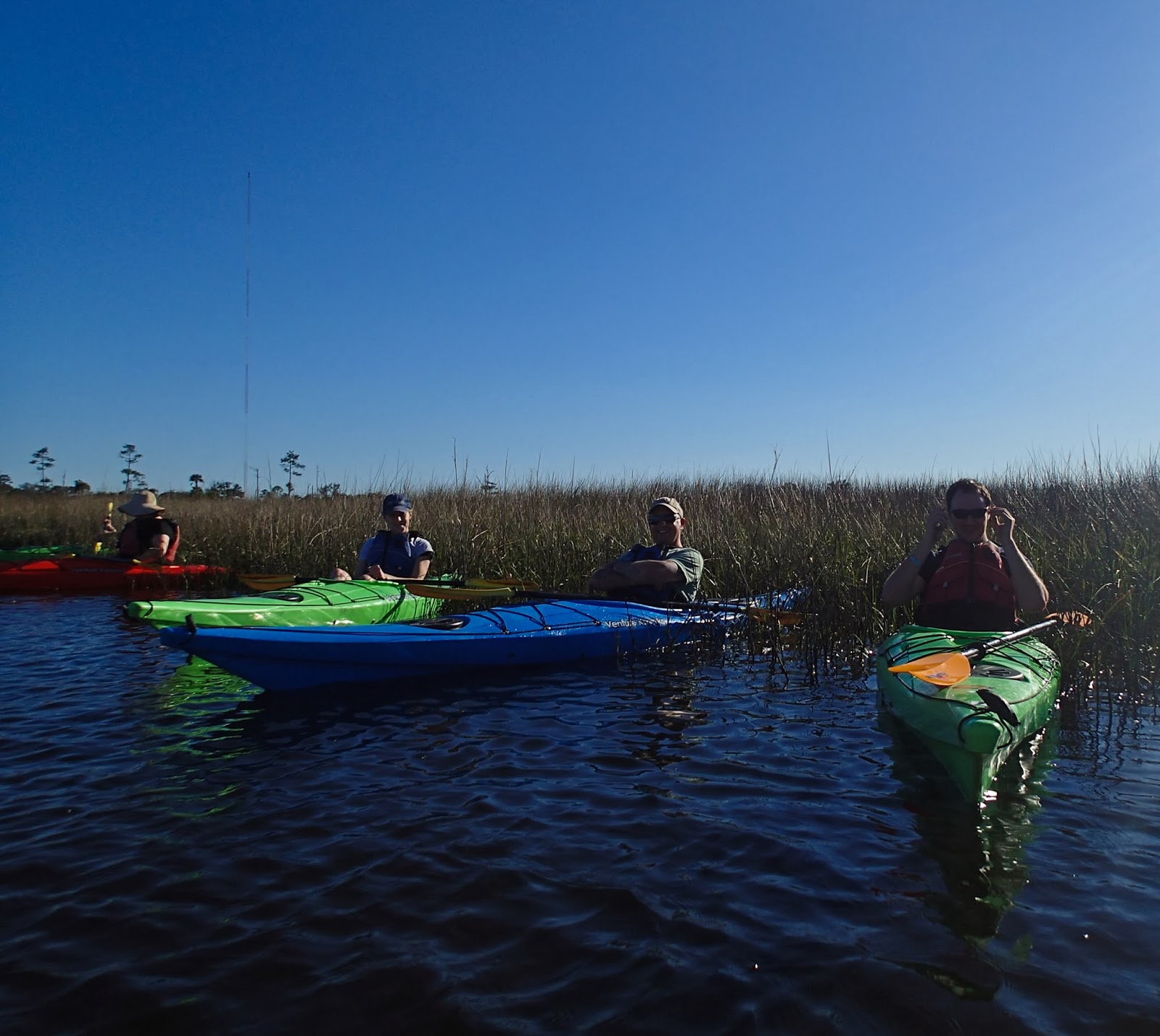 Taking a break from paddling involved simply reversing the boat into the Spartina Grass lining the edges of the channels :-) 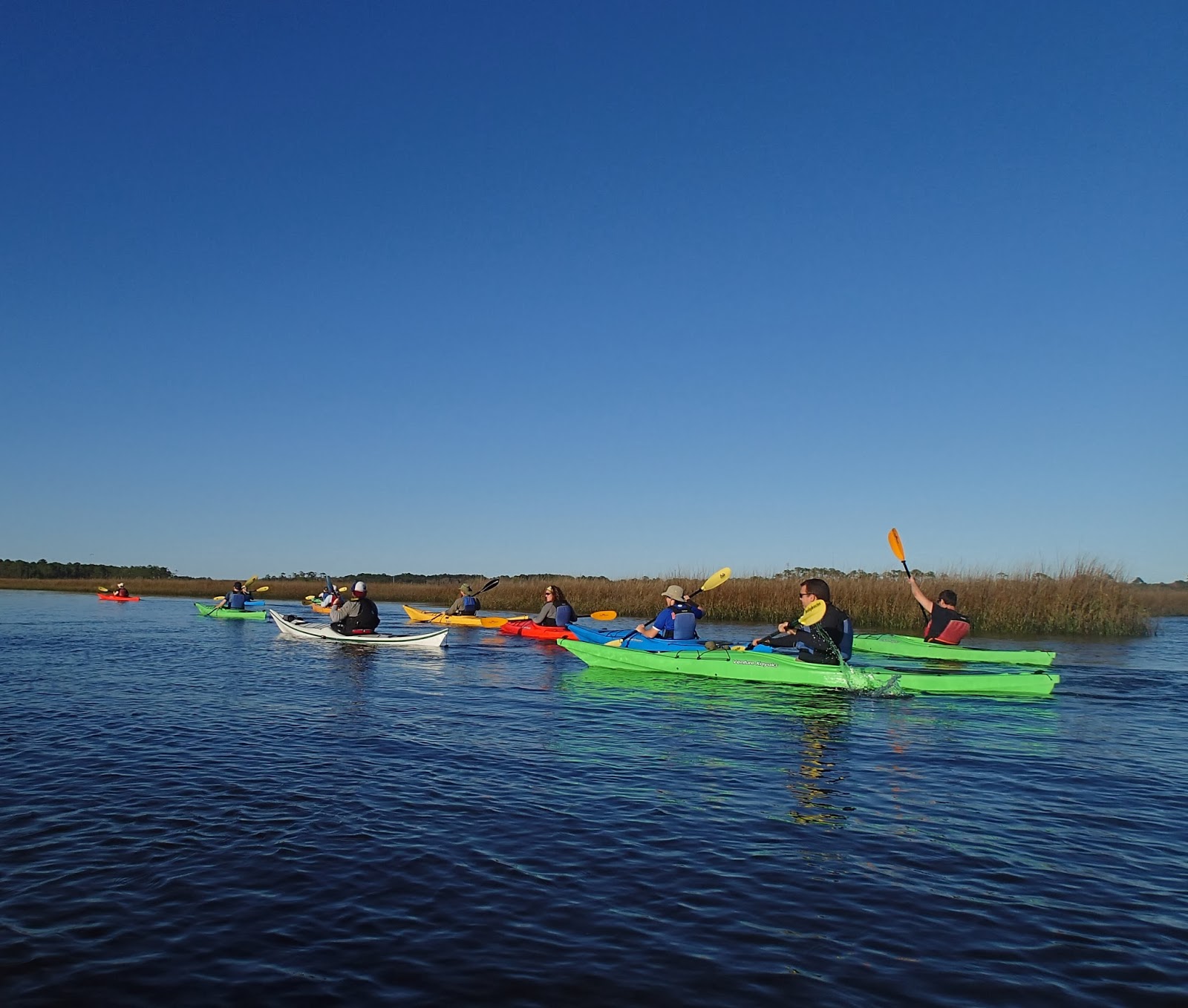 All too soon we were back out onto the ICW and heading back to the boat launch from where we'd set out.  It had been a great afternoon with good company, lovely weather and an interesting route; a perfectly paced and informative trip.  If you're in the area and want to experience paddling this special environment, First Coast Outfitters are really recommended.

Of course, after all this outdoor activity, we felt that the only way to round off the day would be to refuel with pizza and a glass or two of wine at Al's Pizza in nearby Atlantic Beach - not really a sea kayaking restaurant, but highly rated all the same!
Posted by Ian Johnston at 22:52 2 comments: