The north east of Scotland is rich in ancient monuments, standing stones, circles, hillforts and castles.  The most enigmatic, mysterious and impressive are the perhaps the stone circles - voices from our past in stone.

Aberdeenshire has the highest concentration of stone circles anywhere in mainland Britain, many of which are of a unique design found nowhere outside an area bounded by the rivers Don and Deveron - the Recumbent Stone Circles. There are several recumbent circles within a few kilometres of the house, and on a raw and grey spring day we made a short drive to see one circle which we'd not previously visited at Old Keig. 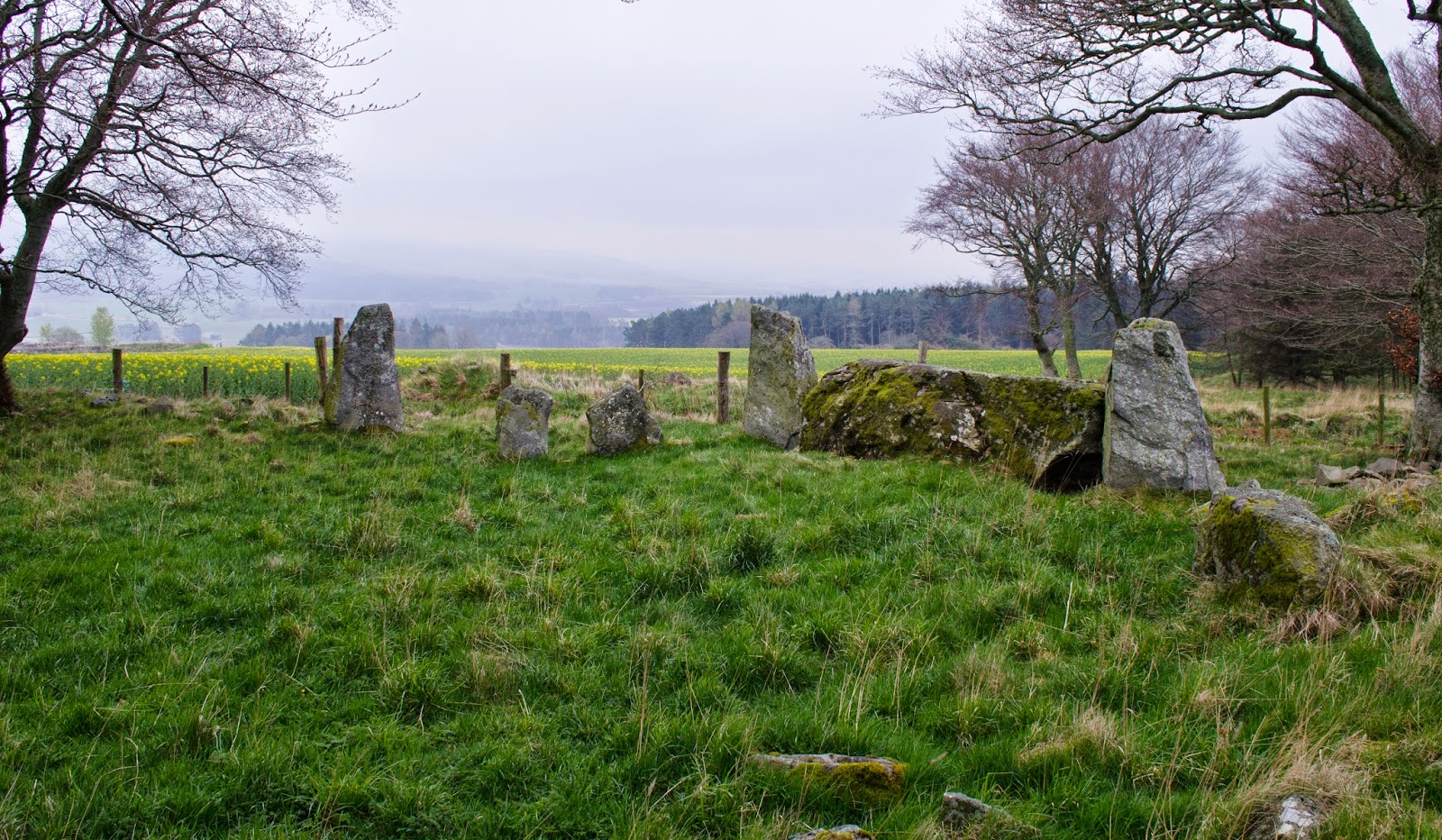 Set on a ridge with views over the Howe of Alford, the circle now sits within a shelter belt of beech and pine trees.  The site was built up to make a level platform for the circle, now bounded by a much more modern drystone dyke.  Excavations have revealed that the interior of the circle had a bank of stones and a central cairn bounded by a semi circle of kerb stones; this was a complex construction.  Dated to the Neolithic, remains of pottery and burnt bones have been found buried near the central cairn.

The characteristic recumbent with its two flankers remain, but only a few of the orthostats which would have formed a circle diminishing in height are still intact. 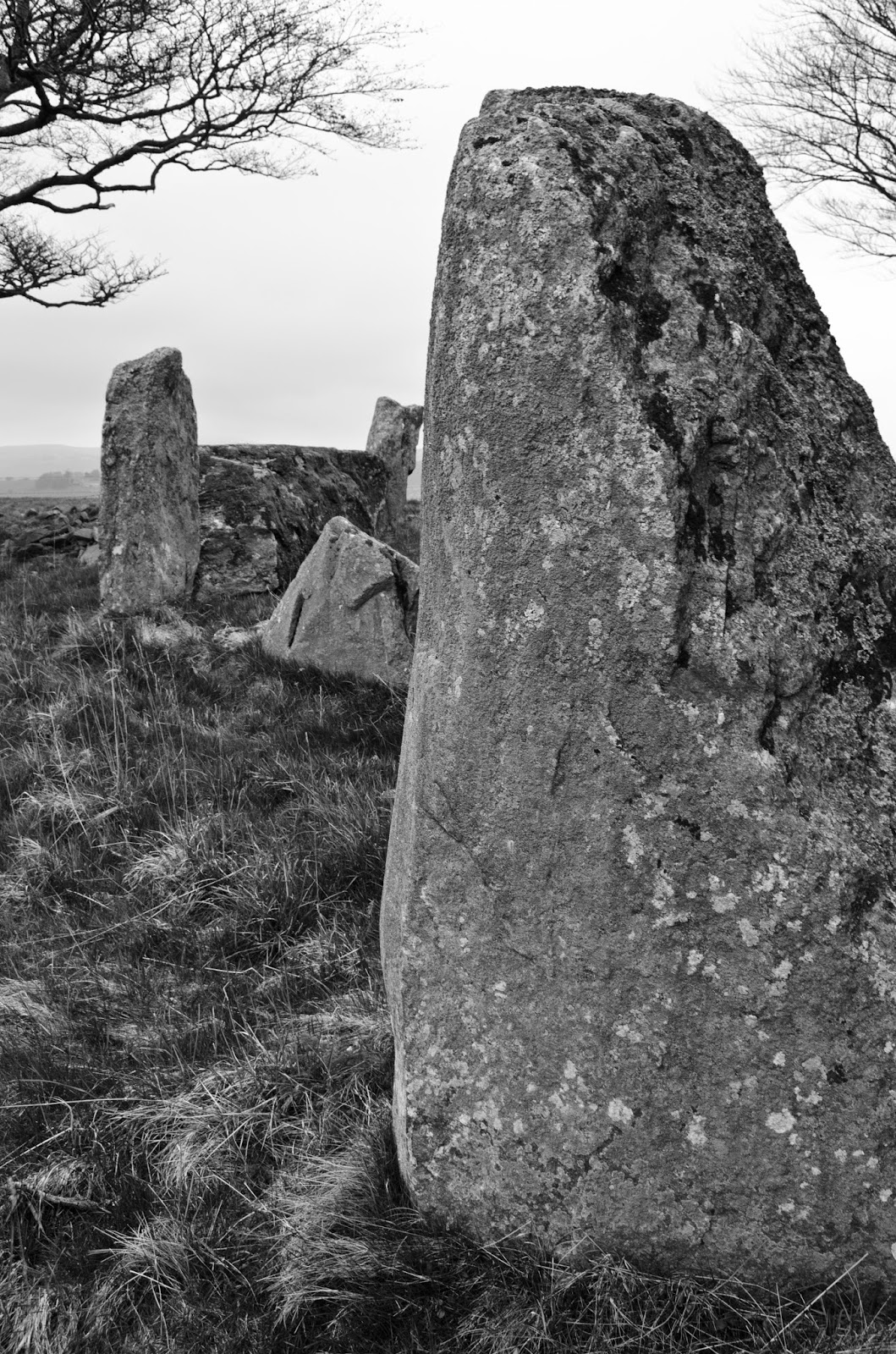 Massive and impressive, the big stones have a subtle geometric pattern common to every one of the recumbent style circles.  The recumbent itself is misaligned with the circumference of the circle by 15 degrees, tracing an arc-axis towards the centre, making the "circle" a subtle spiral. 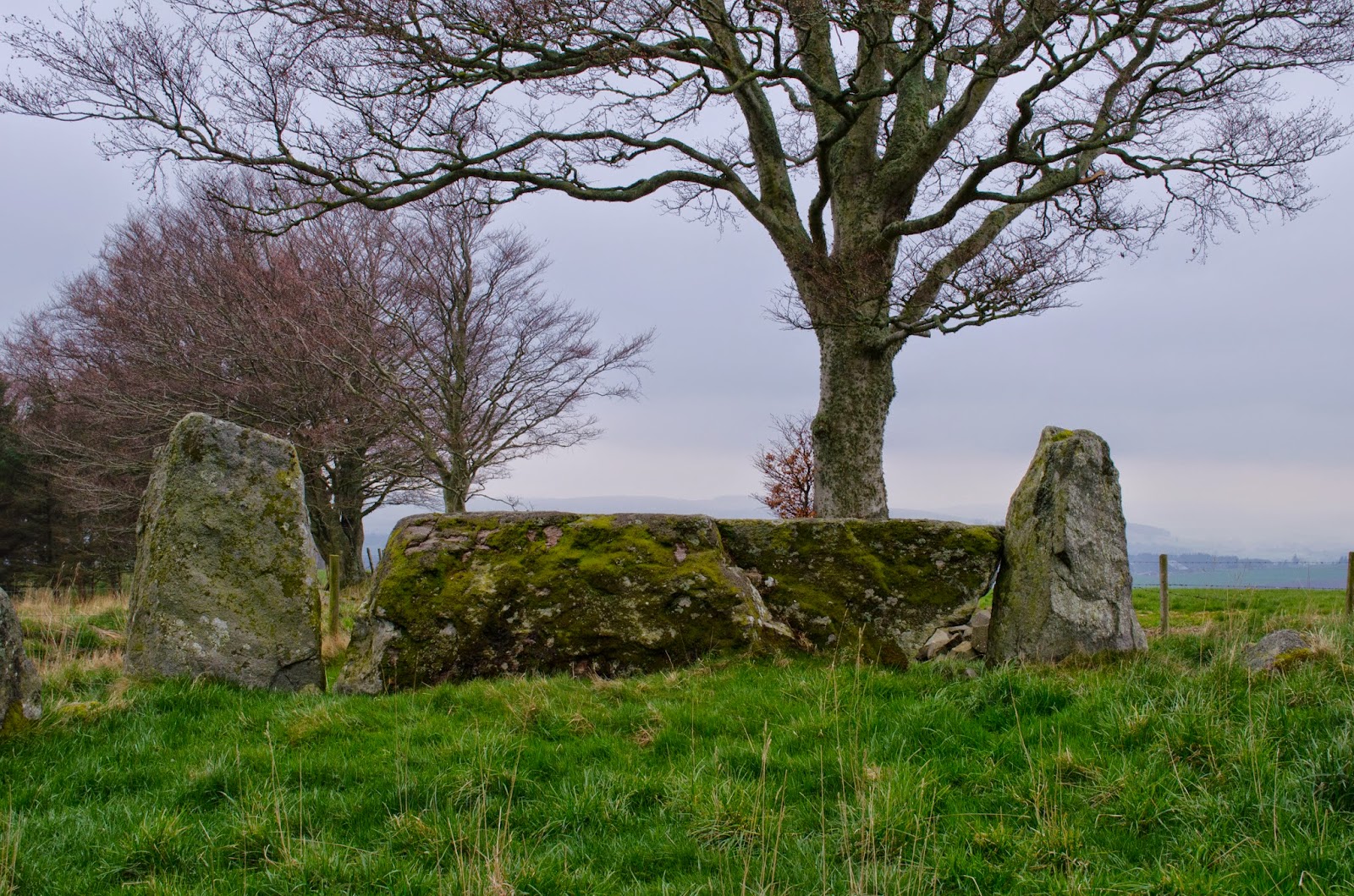 This is impressive enough, but there's more.  The celestial phenomenon of lunar standstill occurs every 18.6 years and the circle is aligned to it - the midsummer moonset at the major standstill sets precisely over the left edge of the recumbent in the angle formed by the left flanker while the midsummer moonset at the minor standstill sets precisely over the right hand edge of the flanker in the angle formed by the right flanker.  This is surely not coincidence; I have to believe that this astonishingly accurate positioning was by design.

Old Keig's circle is 20 metres in diameter and is noted for the size of the recumbent - the largest of any of this style of circle.  It's a huge block of sillimanite gneiss and the rock type is significant because it wasn't quarried locally. 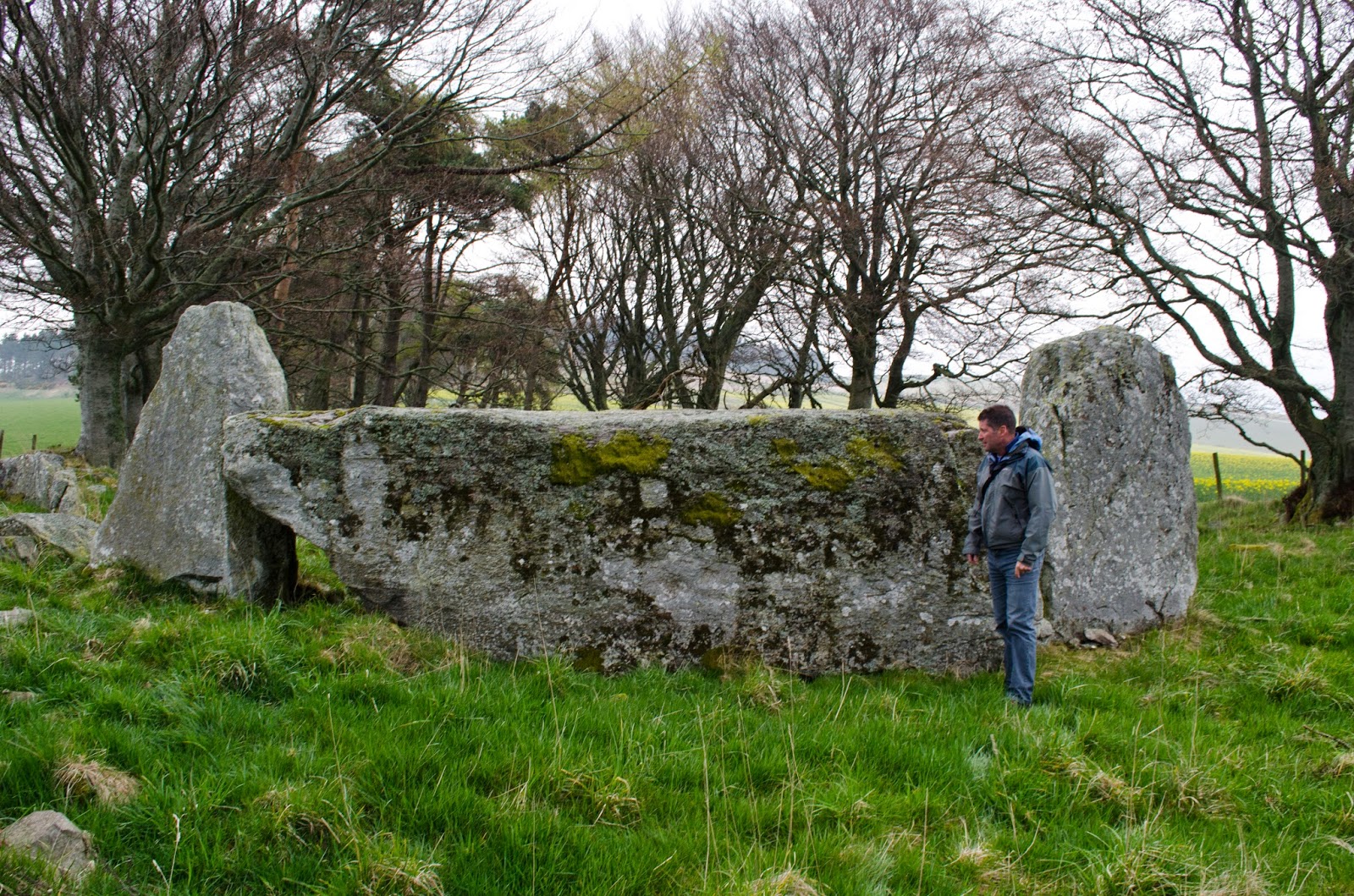 This gigantic block was quarried from somewhere in the valley of the River Don - some 10 kilometres from the site.  It was worked to make a completely level top face while the bottom of the stone was worked into a "keel" shape to better sit in the ground.

Then this enormous stone measuring 5 metres long by two metres wide by two metres deep and weighing 53 tons was dragged 10 kilometres to this site - the last kilometre up a slope of 1:14 gradient.  The work involved must have been staggering. 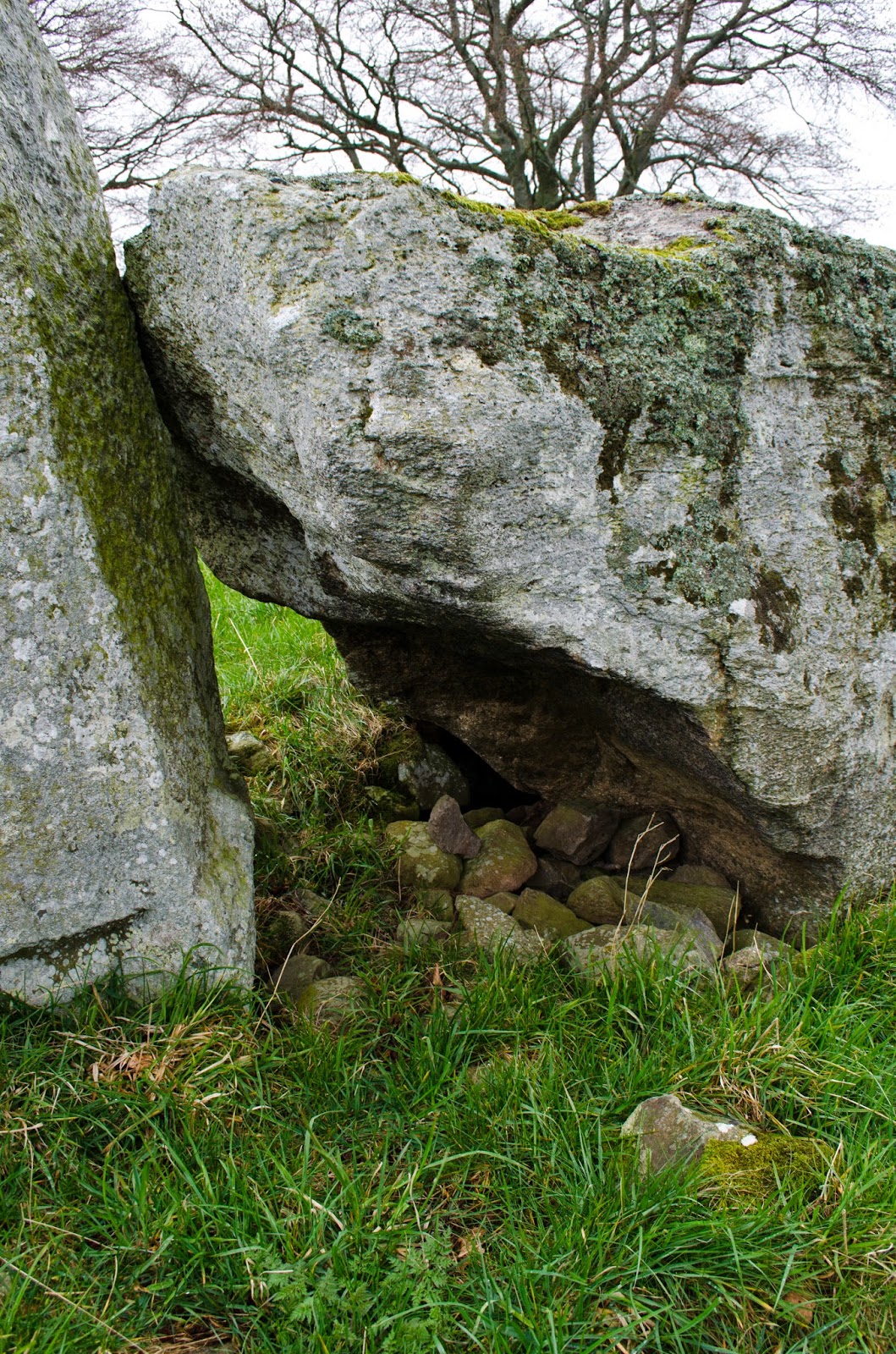 The flankers are carefully placed against the recumbent - the small rocks under the edge are believed to have been positioned much later. 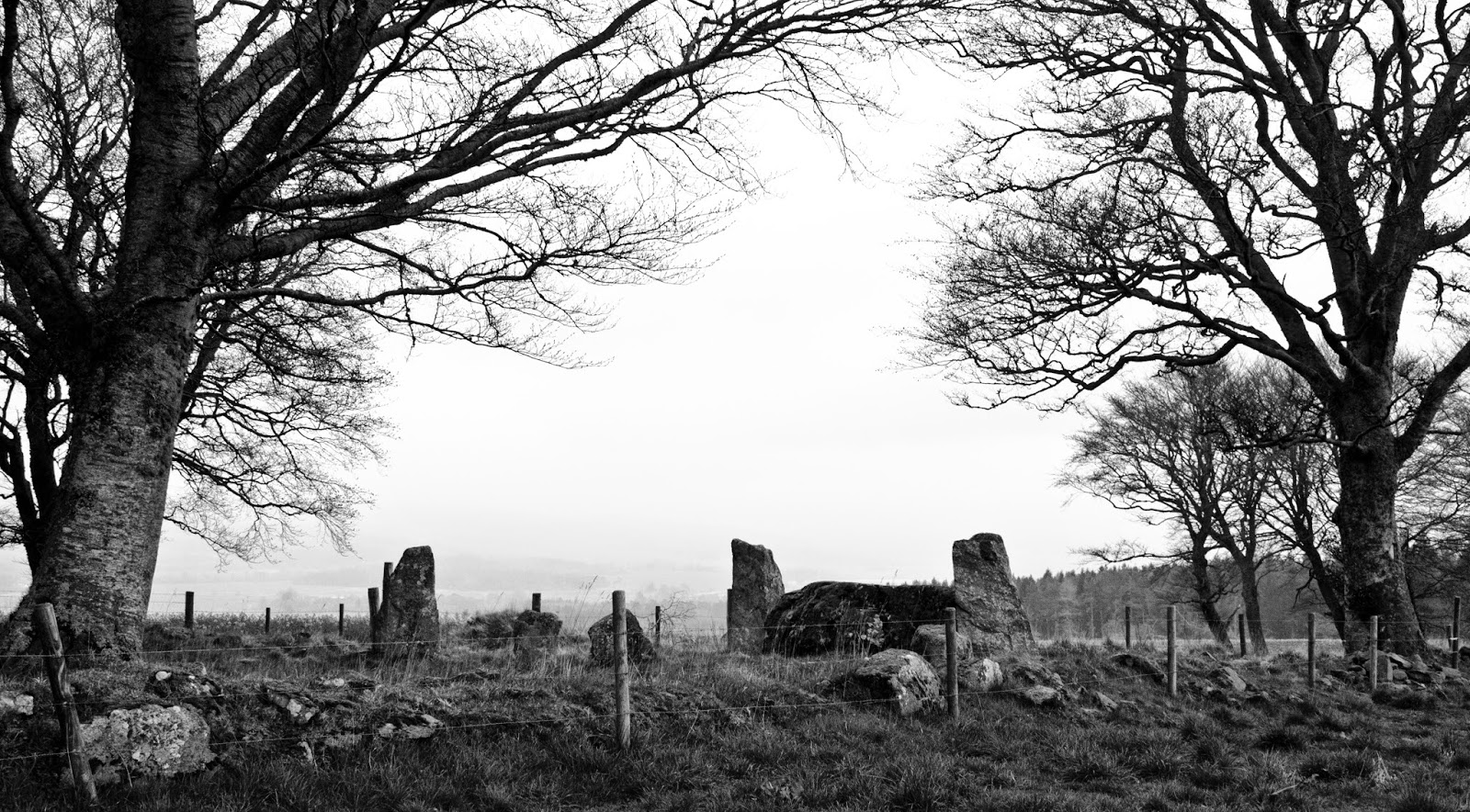 It's only when one considers the work and care which went into this and so many other circles that the true import of what stands here becomes a little clearer.

Far from being primitive savages, the folk who designed and made these circles in the Neolithic - the Stone Age - must have practiced agriculture; only a settled population could have undertaken such a huge project.  Some of them at least must have been able to perform complex observations and mathematical equations in order to work out the positioning and the subtle geometric arrangements.  They must have been a sophisticated enough folk to be able to organise labour (whether voluntary or forced we'll never know) and to use tools, ropes, levers and all the rest in order to move and position huge stones. They must also have been numerous enough to move the stones; it's been estimated that at least 100 people would have been required - or a combination of people and oxen.  As the circles are comparatively closely spaced there must also have been numerous similar communities.

And they must have had time.  The agriculture practiced must have allowed sufficient margins of time to create monuments such as circles and standing stones.

The purpose of the circles remains something of a mystery; were they observatories, places of worship, places of sacrifice even?  Were they used by an exclusive elite or were they a communal statement of the sense of place of the society which made them? Certainly they were places of power, and of powerful symbolism - they remain that to this day.  There is an indefinable presence among the circles and stones - an echo down thousands of years, a sense of mystery and wonder.  In this, the circle builders were spectacularly successful.

We came away from the Old Keig circle with renewed wonder and admiration for what these folk achieved - and maybe that too was part of the purpose of the circles.
Posted by Ian Johnston at 21:01 4 comments: