Mind the Gap. And the shark.

On a warm and humid day I went up to the Moray Firth coast at my usual spot, Sandend, to paddle eastward along to Whitehills. The sea was almost completely calm, rare enough on this stretch of coast and over towards Logie Head the fields of barley on the clifftop shone in the sun. 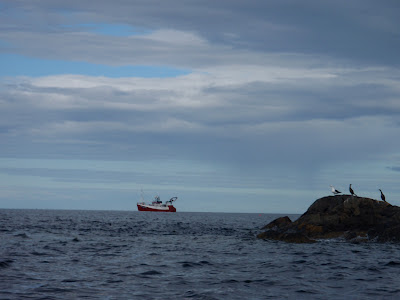 A group of trawlers were working a little way offshore.  Usually there are only creel fishermen working close inshore from small boats.  The trawlers were local boats from Fraserburgh fishing for squid.  Certainly there were plenty of small fish about; occasionally the water would erupt with activity as large shoals of sprat sized fish churned the surface. 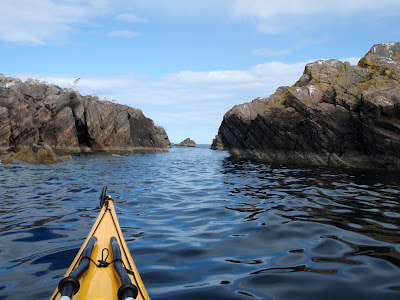 Approaching the West Head which separates Sandend Bay from Portsoy the combination of flat calm and a tide approaching full made for a very easy passage through the wider of the two gaps which cut right through the head. Rounding the point itself, an unmistakeable shape moved purposefully through the water ahead of me. 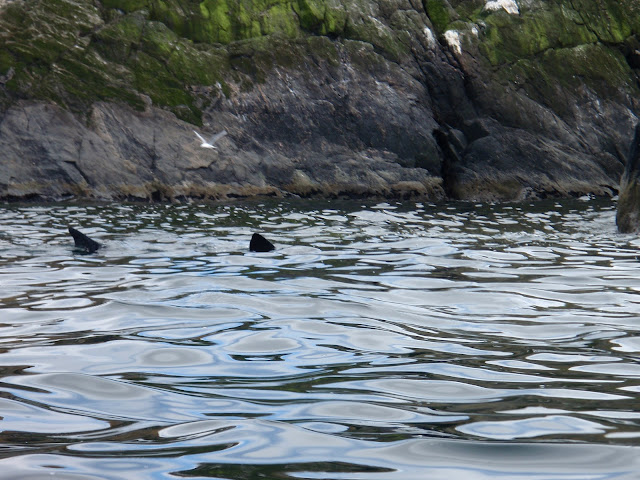 Basking sharks (Cetorhinus maximus) are less commonly seen on Scotland's east coast than on the west, but here were two, close inshore.  One moved away offshore but this one cruised around me, feeding as it went.  I could clearly see the large white gape as it passed close by. 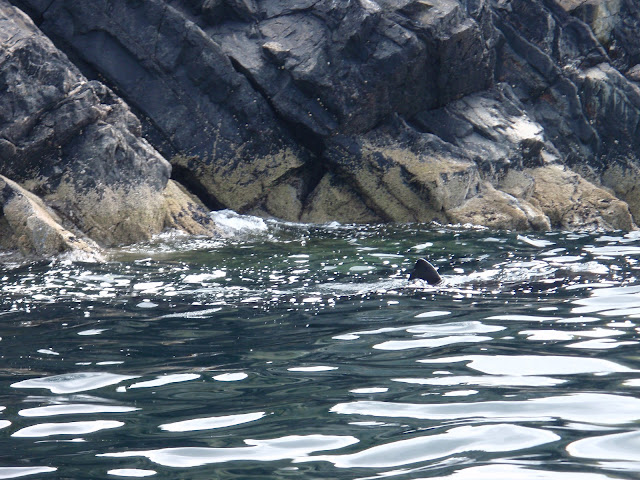 The shark continued feeding, circling close in under the cliffs.  It seemed to be definitely favouring the area close to the rocks.  Perhaps the plankton upon which these sharks feed were being stirred up as the deep water ran against the cliffs. 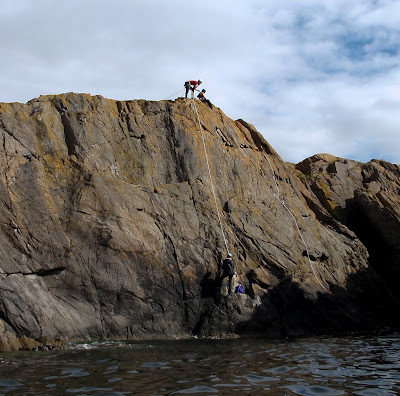 I pointed out the shark to a team of climbers on a nearby cliff route.  They were able to see the outline very clearly from above as it approached right underneath their route.  They were also able to confirm that it was about two thirds the length of my boat, making it at 3 metres a fairly small example. Basking sharkks are the second largest fish in the ocean and can reach 11 metres in length; females usually being a bit bigger than males.  Comparatively little is known about these plankton feeding giants - populations were severly depleted by hunting up until quite recently (the "Ring of Bright Water" author Gavin Maxwell operated a shark fishery based at Soay off Skye in the middle of the 20th century).  As the shark headed into the small inlet below the climbers, I wanted to give it space, handily there was a convenient exit. 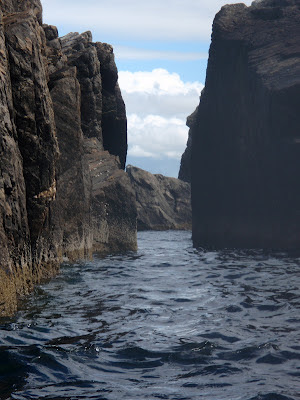 The narrower of the two gaps at the West Head can't usually be paddled as it's narrow and prone to swell.  Today however it made the perfect route to get out of the cove and allow the shark to feed undisturbed.It was still necessary to lay my paddle along the boat as I went through, but it was probably the easiest passage I've had here. 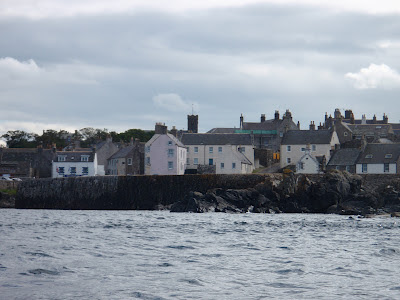 Often my paddles here end at the fishing village of Portsoy, but today I passed by and continued eastwards towards Whitehills, another fishing harbour, but these days busier with yachts at a marina facility within the harbour. 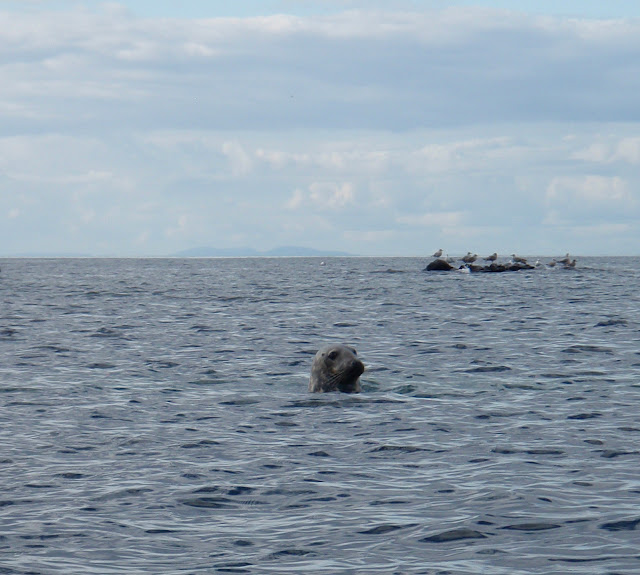 The coast from Portsoy to Whitehills is a good area to see Grey Seals, and today there were plenty around.  Soon they will be seeking out areas to pup, but today most seemed to be dozing in the sea.  So my short paddle had packed in the largest shark in UK waters and the largest carnivore - there's never a dull day.....

We travelled back to Portsoy to eat a supper of fish and chips overlooking the harbour and saw (probably) the same Basking Shark close in by the cliffs just off the harbour.  It was drawing a fair group of folk to watch as it swam obligingly around, still filtering plankton.
Posted by Ian Johnston at 18:02 2 comments: 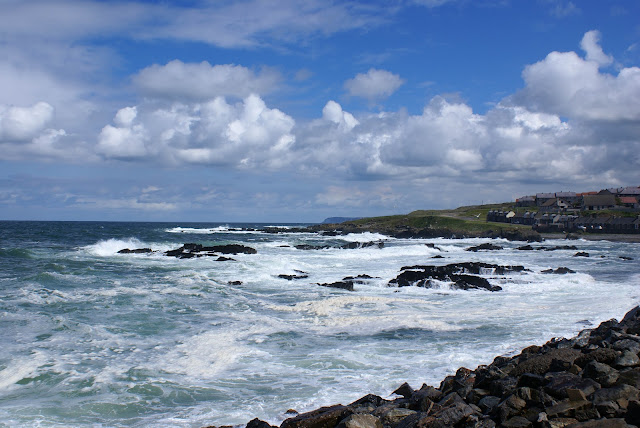 An old fishing saying is that "there are days to fish, and days to mend your nets".  This June day at Macduff (appropriately a fishing town) was most definitely one on which to mend nets.  A raw north-easterly stripped away the warmth of the sun and filled the air with noise and spray. Seabirds were being flung sideways in the turbulence around the sea wall as wave and wind combined.

After the warmth of early June a pattern of northerly winds set in, blowing steadily onshore on the Moray Firth.  The winds were cycling around an unusual pressure distribution and were blowing from Scandinavia and the far north - so they came with a bite.

The dark headland in the distance is Troup Head, a large seabird colony and RSPB reserve.  The windy conditions will have made life difficult for the birds this season.

The patchwork of sun and shadow against the blues and greys of the sea and the blinding white of the surging swell made a wild and compelling scene.