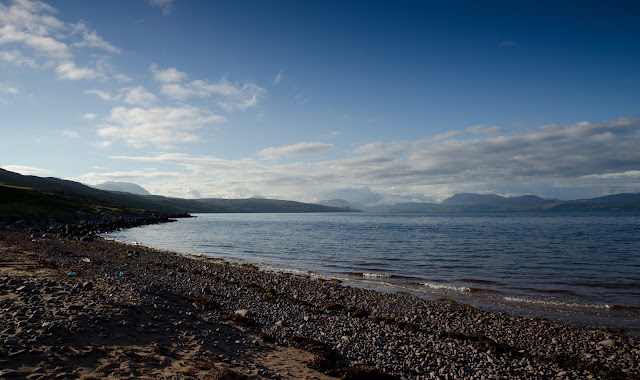 Sometime during the night I became aware that the rain had stopped and the wind had dropped away.  Early sunlight heating the tents prompted us to be up and about early, emerging into a bright morning.  Unfortunately, we weren't the only ones to be up and about early and we exited the tents straight into clouds of ferocious midges.  Usually they don't bite much in bright sunlight (see paragraph 2.6.2 in this paper), but the local population on this piece of Loch Torridon shoreline clearly hadn't read the paper!  We scrambled for our midge repellent and I straight away put on my suit of "midge armour" which made things much more bearable........ 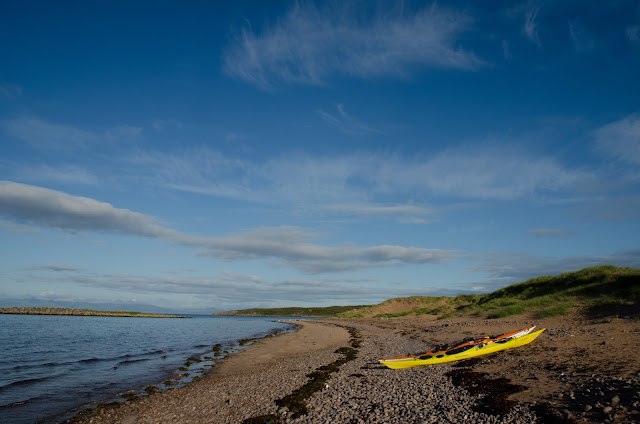 Though the midges were doing their level best it was still a lovely morning, and in a superb location. Packing was a little quicker than we'd have liked in order to escape the midge attack, which remarkably continued even as the day heated up.

As soon as we were on the water and away from the shore we left the midges behind and were able to fully appreciate the morning....and what a morning!  Our position at the outermost part of Loch Torridon had sweeping views - to the west the Trotternish peninsula on Skye lay under an ever-changing cloudscape; while on the horizon we caught a glimpse of the long chain of the outer Hebrides. 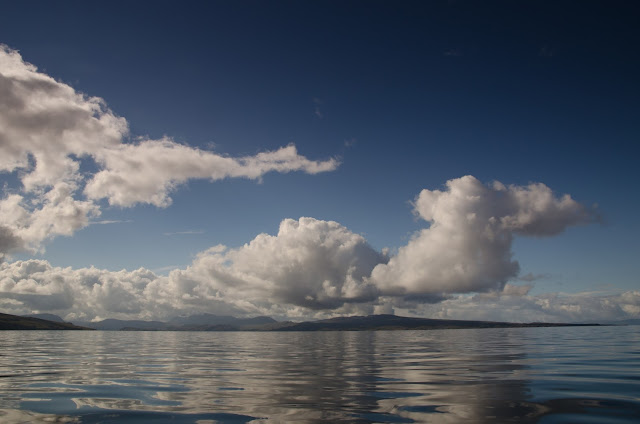 It was the majestic cloudscapes (and not the midge attack!) which made the morning so memorable.  Towering cumulus would build over the land and then slowly subside in an ever-changing pattern, dissipating where it drifted over water and never really threatening rain. 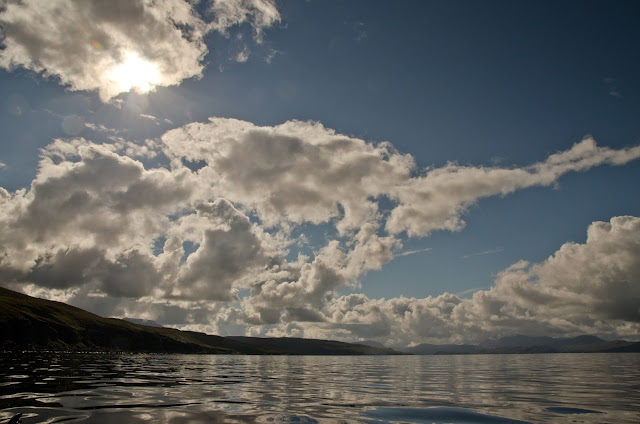 We paddled eastward, into Loch Torridon and into patterns of bright sunlight and cloud-shadow. 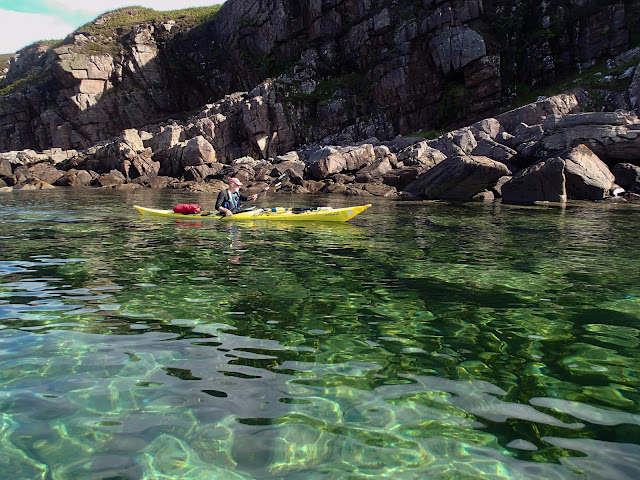 Each time the sun emerged from the cloud pattern, the water beneath our boats was flooded with morning light, the colour and detail snapped into sharp focus by the intensity of the light. 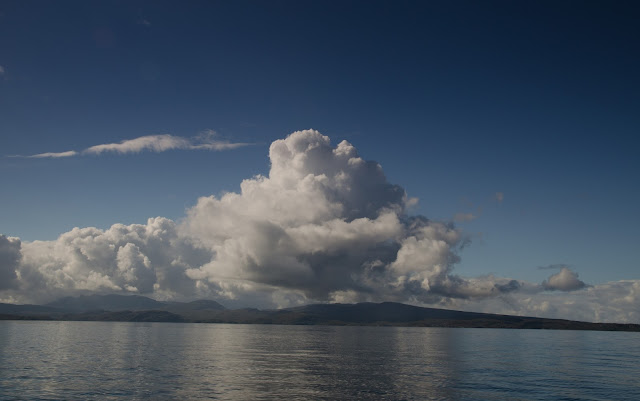 As the morning grew warmer the cloudscape developed a heavier, more solid appearance, but still didn't really threaten rain.  The Skye shore was in shade, while here on the Torridon shore..... 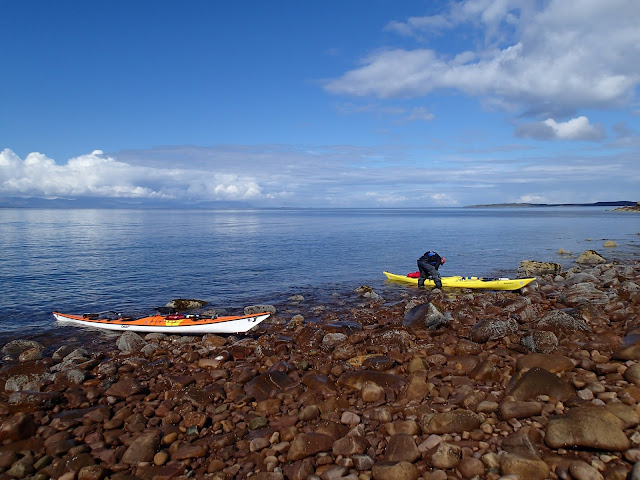 ...we basked in warm sun.  After an hour or so of paddling we decided on a second breakfast and landed on a beach of sandstone boulders.  Thankfully the midges seemed to have given up and we enjoyed a pleasant coffee break propped against boulders warmed by the sun.
Posted by Ian Johnston at 06:30 2 comments: 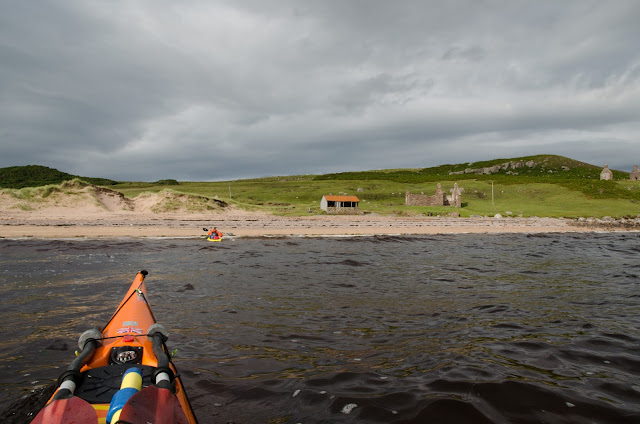 On our crossing of outer Loch Torridon we had a very visible aiming point - the sandy beach at Red Point which seemed to have caught any patches of sunlight throughout the day.  A pale patch amongst greys, greens and browns, it stands out well in views from the south.  The swell which had built up behind us as we crossed was broken up by a small island and an offshore reef, making for a relatively easy landing. 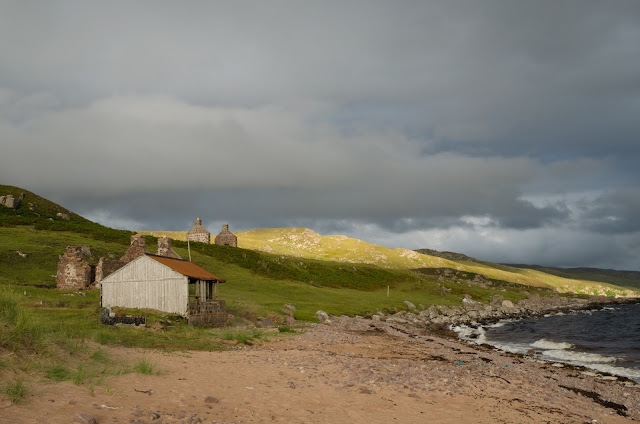 Red Point was the site of a fishing station, now abandoned.  The cottages are just gable ends and a couple of walls, the most complete building being a semi-derelict store on the shore.  It's missing substantial portions of wall and roof and was a bit "sheepy" - we would be glad of it soon enough! Slender trunks of pine trees seem out of place in the dunes nearby; they didn't grow here but were dug into the dunes to provide supports for net drying.

I knew from a previous visit that we could find decent pitches behind the dunes, we pitched our tents in comparative shelter from a strong breeze which at least guaranteed no midges would trouble us during the evening. 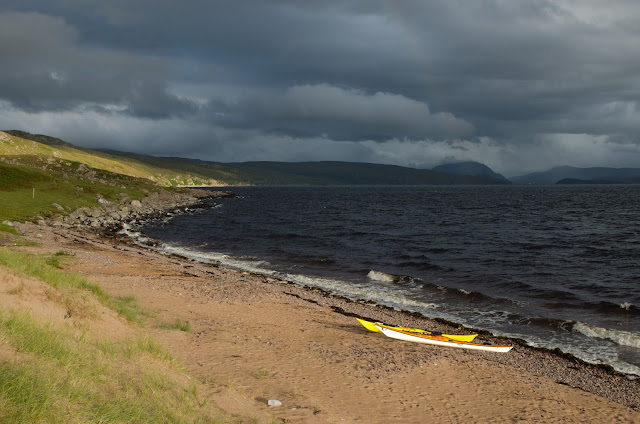 A blink of evening sunshine provided a flash of colour, but unfortunately it didn't last long........ 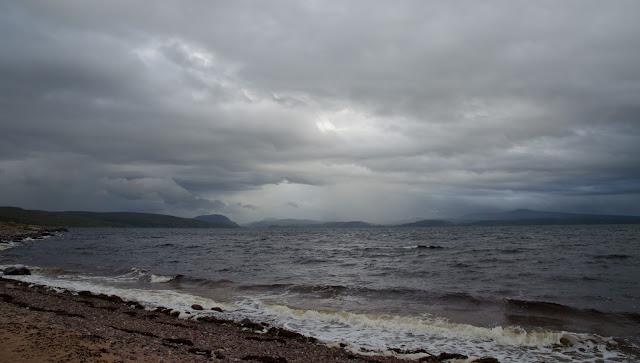 ...before the weather begann to close in.  The wind increased to a pretty strong blow and soon we felt the first spots of rain. 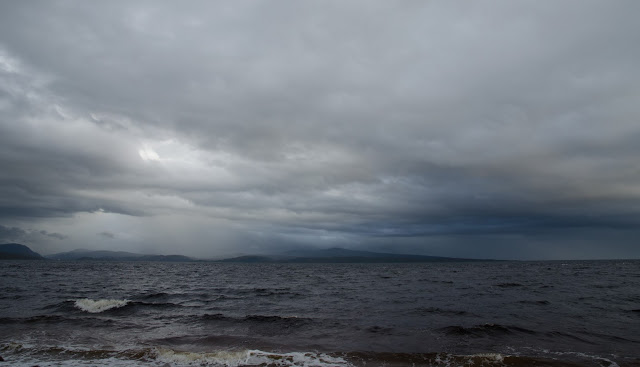 To the south, the shore we'd paddled from looked to be getting some heavier rain; we reflected that place we'd originally planned to camp would have been exposed to the worst of this weather. 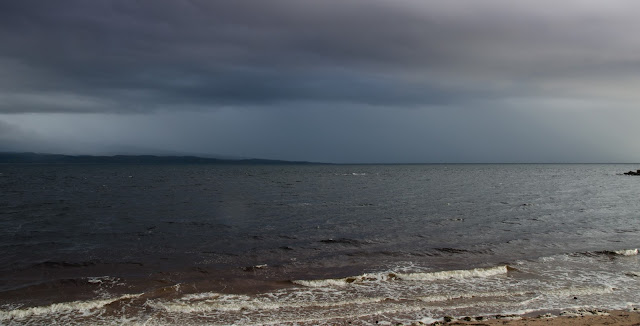 To seaward, there was an unmistakeable and menacing bank of rain approaching.  We moved our cooking kit into the derelict shed to take advantage of whatever shelter it offered - there would be no camp fire on this evening!

The next couple of hours saw heavy rain and a strong wind battering the coast, and the shed where we huddled to eat dinner.  The weather was pretty hostile and the evening was one of the coldest August evenings I can recall outside of the mountains.  Soon after dinner we battened down our tents and retired to our sleeping bags. 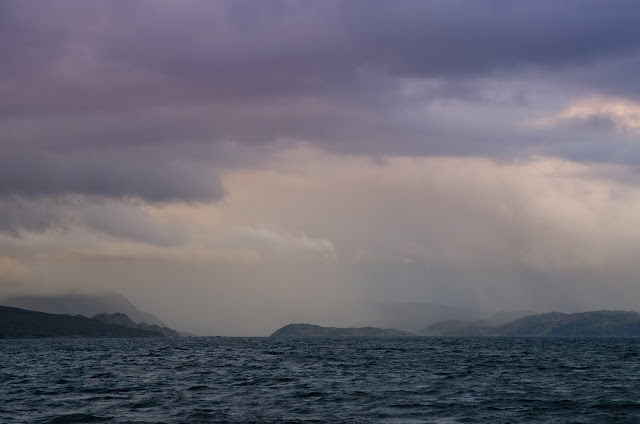 The view from the tent door just before I closed it up was quite dramatic.  The mountains of Torridon were invisible and the middle part of the loch at Shieldaig was taking a real meteorological beating - the sky was a livid purple shade and the sheets of rain were clearly visible.  Lying in my sleeping bag listening to the rain and wind on the tent, I wondered what the morning might bring......
Posted by Ian Johnston at 06:00 4 comments:

A two day Torridon tour - changing like the weather 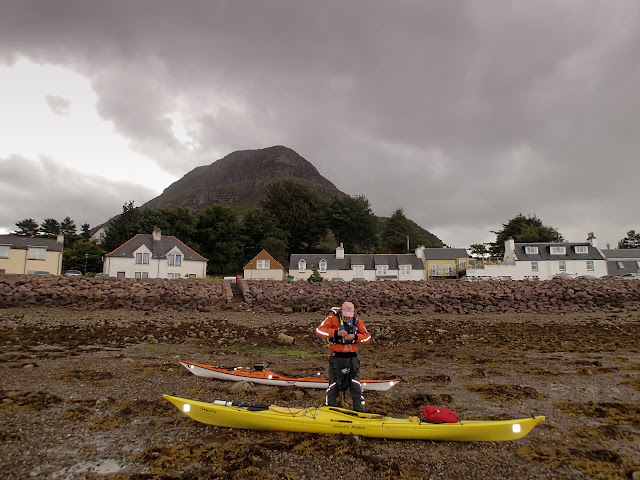 July and August of 2017 offered little in the way of settled weather in Scotland.  Frequent spells of windy conditions limited the opportunity for anything more than brief outings.  In the second week of August Allan and I spotted a couple of days in the forecast which looked like giving a good chance of doing a camping trip - though there was uncertainty about the wind strength.

In general it looked to be from the south for a day before swinging through west to north for the following two days.  Finding somewhere which would offer shelter from opposing wind directions on consecutive days was an interesting conundrum!  We decided on a trip from Loch Torridon, with options to head out to the island of Rona if the weather was particularly obliging, or staying within the loch if it proved less benign.

We drove over to the west coast and prepared to set out from Shieldaig (from the old Norse "Sildvik" - Herring Bay).  The sky looked quite threatening as we packed our boats, we hoped that the forecast of brighter conditions later was accurate. 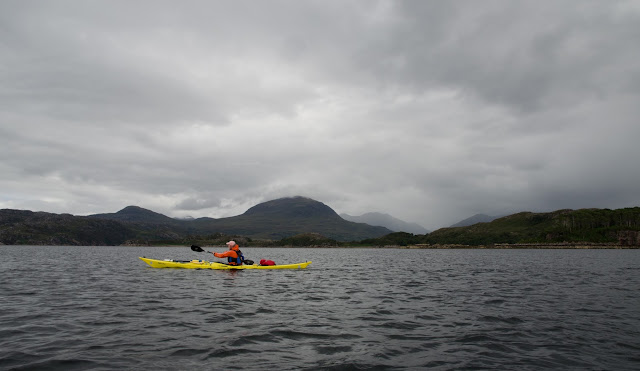 We started out heading north west towards the outer loch.  Loch Torridon is in three sections, the outer loch which is a wide expanse opening to the Minch, Loch Shieldaig forms part of the middle section and an upper loch which laps the feet of the great Torridon rampart, Liathach. 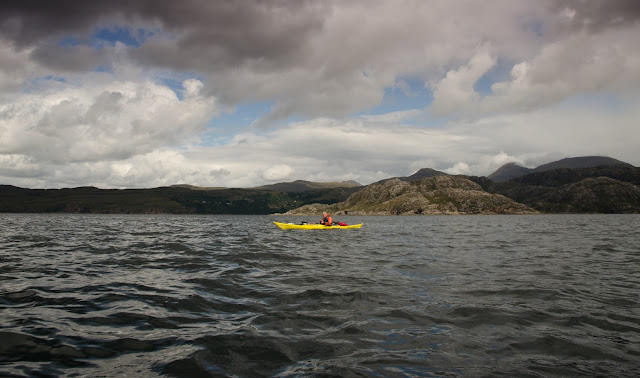 Shortly after setting out the overcast, drizzly cloud began to break up and allow some warm sunshine to break through.  As so often in Scotland, the speed of the change from grey to dazzling colour was startling...... 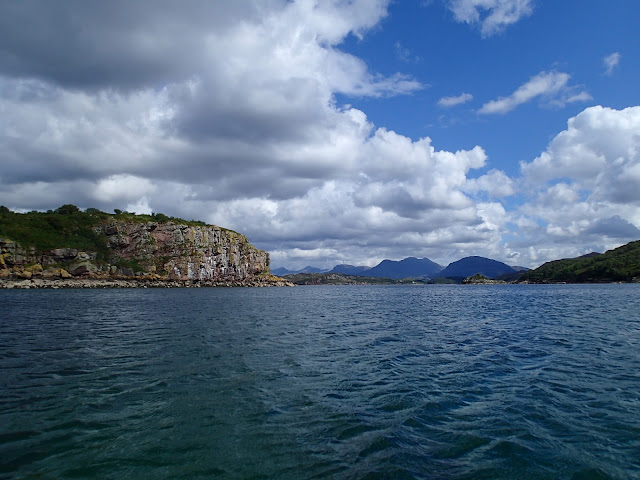 ....and we were soon in bright sunlight under blue skies. 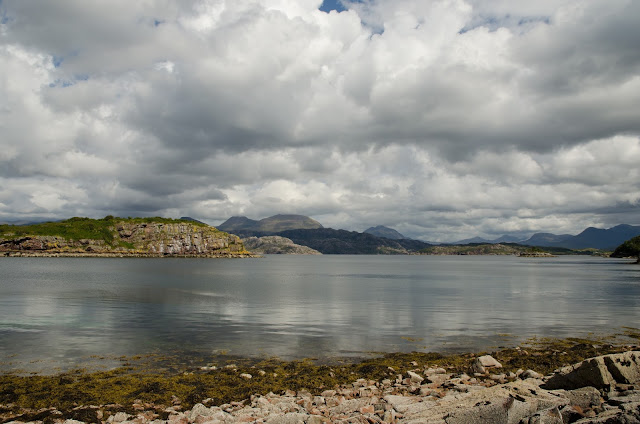 The view up the loch to the distant Torridon hills was particularly fine, rows of shapely summits marching into the distance.  We landed in a rocky bay to take a leisurely second luncheon and enjoy the sun on our backs. 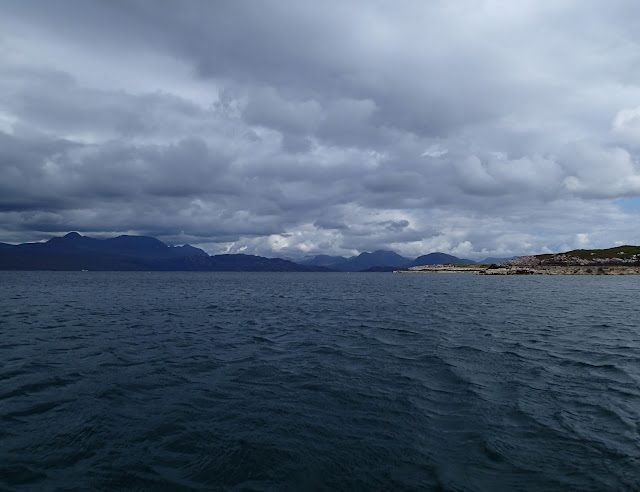 It was clear that the sunny conditions wouldn't last too long though, and with an approaching cloudbank came a strong southerly wind.  This caused us to revise our plans - the strength of the wind within the shelter of the loch suggested that things would be a lot more gusty in open water. Our plan had been to paddle out of the loch and head south to camp in a bay which faced south - this was in anticipation of stronger northerly winds the following day.  It was clear that we'd have a slog to the intended bay and that it would be exposed to swell and weather.  We rafted up for a quick reassessment.....


Our revised plan was to paddle along the southern shore of the outer loch as far as Rubha na Fearna, (one of two headlands with the same name, less than two kilometres apart, the name means Point of the Alder trees), then to cross the loch with the wind at our backs to the north shore and camp there.  The campsite would be exposed to the southerly weather but I knew a place that we could find a sheltered spot - and we'd be in a good position when the wind did swing to the north. 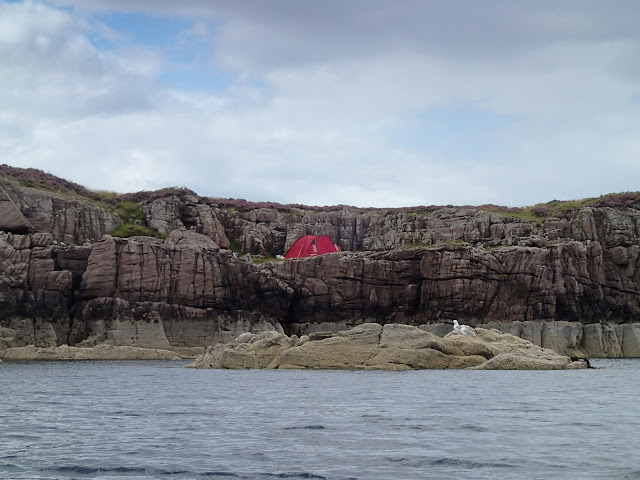 We weren't the only folk to be wild camping on the shore of Loch Torridon that evening; a pair of fishermen had set up their tent on the turf of a sandstone shelf.  The site was very sheltered, but you wouldn't want to be prone to sleep-walking here! 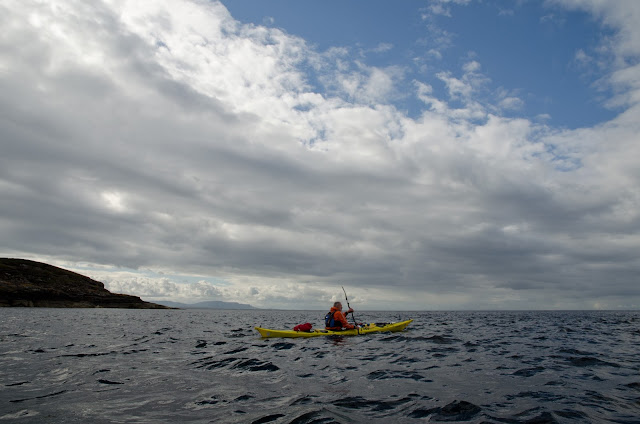 In the late afternoon we reached the outermost point of Loch Torridon and turned our bows to the north.  A steady breeze at our backs made for good speed as we set out.  Away to the west lay the distant silhouette of Skye's Trotternish peninsula.  As we moved out into open water the swell and wind increased and all my imaes of the crossing were spoiled by water splashing onto the camera lens - it was good fun though and we made cracking speed towards our camp.
Posted by Ian Johnston at 18:45 5 comments: