The Crux AK70 is marketed as a large mountaineering rucsack suitable for climbs in the Greater Ranges. Crux’s sister company Lightwave market a range of rucsacks aimed at trekking and backpacking, but the simplicity and design features of the AK70 make this sac suitable for backpacking as much as alpine climbing.

I’ve owned the AK70 for four years during which time it has been used for multiday backpacking trips in all seasons, weathers and over a range of terrain. I should state at this point that I purchased the rucsack at very slightly less than retail price through a climbing shop discount, and have no connection with Crux at all. 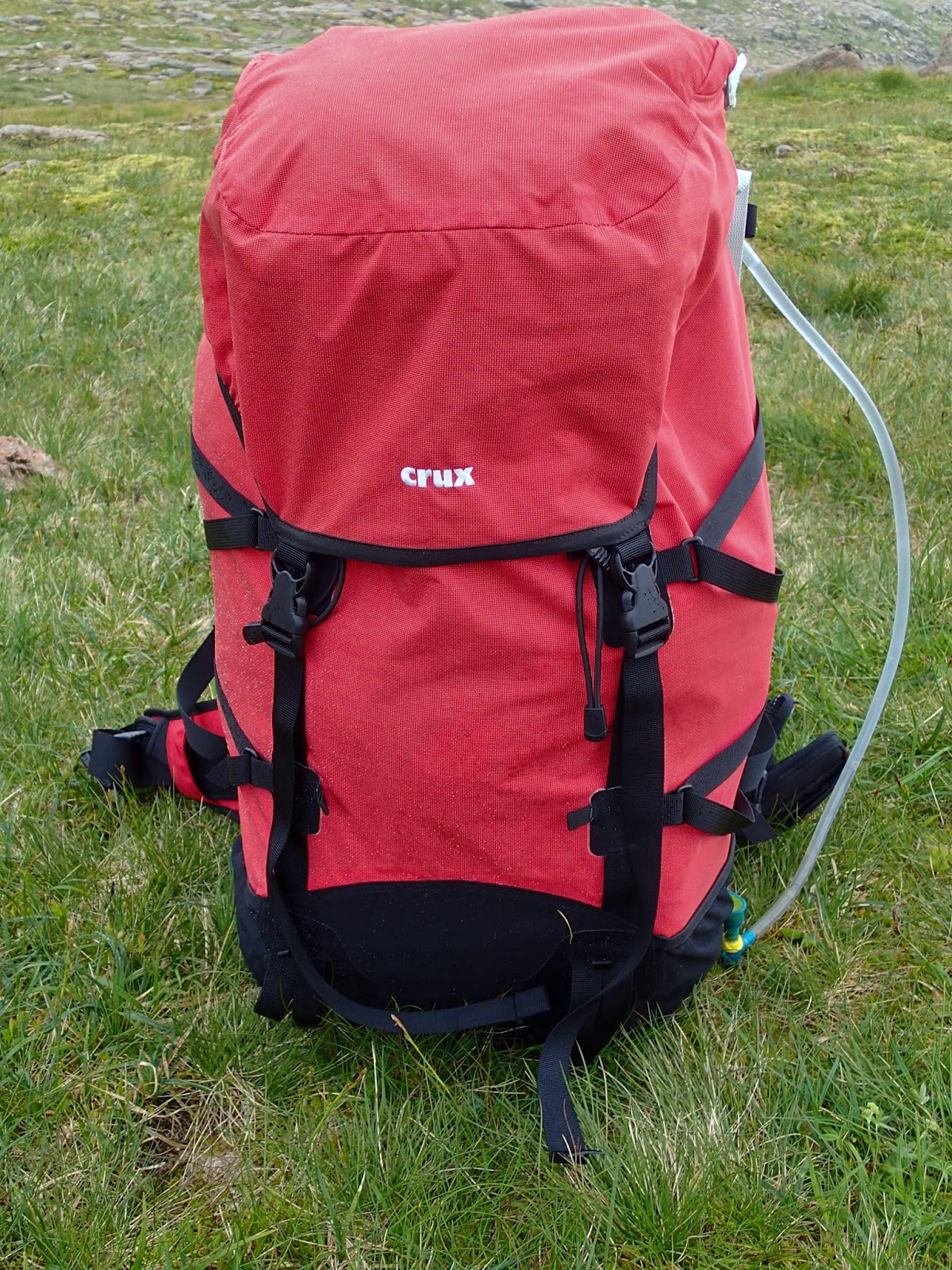 The first thing that is noticeable about the AK70 is its clean, uncluttered design, a big plus for me.  There are none of the bells and whistles, attachments or multiple access points prominent in some designs.  When filled with gear the sac has a clean profile and is almost a throwback in being a classic top-loading single compartment rucsack.

The fabric is a Kevlar/Cordura weave which is light but incredibly tough.  The AK70 has survived frequent brushes with Cairngorm granite and Hebridean gabbro with ease, in fact almost without a scratch.  The base is double layer and is looks as if it will survive just about anything.  Although I pack using multiple small drybags inside any rucsack, I haven’t had any problems with water ingress despite all-day use in some really foul weather.  The body of the sac is a single piece of fabric sewn to the moulded back panel so there are a minimum of seams.  Attachment points for the compression straps and ice axe loops are welded to the fabric and seem capable of resisting considerable stress.  Crux point out that the fabric used in their AK range is twice the weight of fabrics used in competing products and therefore much more robust and yet their rucsacs weigh less than rival products due to the minimalist design.  The AK70 weighs in at a pretty light 1630 grams and feels lighter than it appears.

The lid of the sack is “floating” and can be extended to accommodate extra bulky loads or even removed completely (though I can’t envisage me needing to do that).  There are external and internal lid pockets, the outer has a water resistant zip with a useful zip-pull, the external lid pocket is cavernous and fits map, hat, gloves, snacks etc with plenty of room to spare. There is a compression strap across the top of the sac which sits under the lid for securing bulky items such as a rope.

Down the sides of the rucsack are further compression straps in a zigzag configuration which work extremely well to reduce volume when the sac isn’t fully packed.  There are also stretch wand pockets at each side of the base and simple but strong tape gear loops.  The wand pockets could be used for storing snacks or small items but I’ve found them most useful for securing the sharp tips of walking poles whilst traversing steep or broken ground. 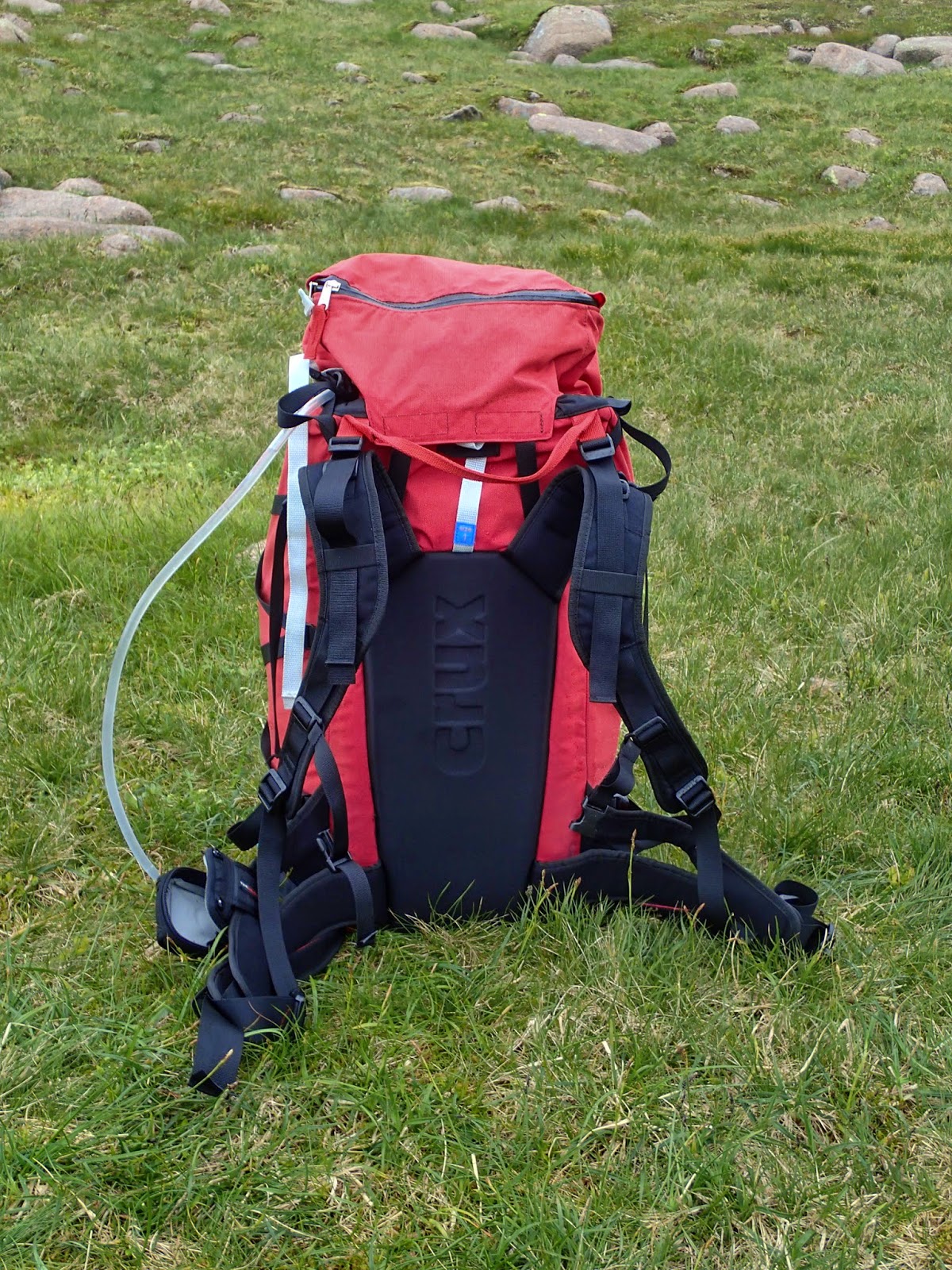 Crux take pride in having developed a carrying system which is simple to the point of being Spartan – and when purchasing the sac this was the one doubt in my mind; would it be comfortable when carrying a load?
Although pared-down to basics, the design and functionality shine through; a great deal of thought has been put into the back and harness.  .  Inside the body of the sac are a 8mm T6 alloy tube frame and a 12mm titanium centre stay, both removable, with a combined weight of just 65 grams.

The back panel is a large moulded panel with the maker’s name recessed into it (the only logo on the sack apart from a small woven one on the lid).  The back panel comes in three sizes, Crux recommend Size 1 for women and smaller men, Size 2 for average sized men and Size 3 for taller men.  At 1.75 metres I fall into the average range but actually found the smaller Size 1 back a better fit.  The back panel sits fully against the back, giving a large contact area for stability and bringing the centre of gravity closer to the wearer.  This would suggest that the Crux would be sweatier to carry than other rucsacks – but since I run pretty hot and generate a lot of heat anyway I haven’t found it to be noticeably sweatier than other backpacking sacs.  The stability from carrying the load close is really quite noticeable; on rough ground or in high wind the sac feels nailed onto one’s back, there is none of the unsteady feeling of a rucsack pulling in its own direction or sliding about when moving across rough ground.  There’s another advantage to the minimalist back panel, it doesn’t absorb water like open-cell foam padding.  This absorption can add noticeable weight to more complex back systems in wet weather.

Intelligent and functional design is also to the fore in the hipbelt, made of 40mm webbing with low profile hip fins.  The arrangement for tightening the waist belt is absolutely ingenious, it also prevents any loose straps around the waistbelt area – vital in a sac designed for mountaineering.  The belt itself is a continuous piece of webbing which wraps around the back beneath the back panel so that strain is transferred to the frame. The fin pads sit comfortably on the hips and support the majority of the load in a comfortable way.
The top tension straps are also continuous retained loops which pull off the frame rater than a row of stitching.  They give good adjustment to either haul in or slacken off the top of the load to suit and again have no loose straps to lash the face.

In use I’ve found the Crux AK70 to be a well-designed, simple but very comfortable rucsack.  Although not primarily designed for backpacking it does the job superbly well.  The quality of material used and the functional design make it stand out, the simplicity and understated features just do the job and do it well.  In hot conditions the back may be a little more sweaty than some other sacs with chimneys, vents and the like, but the trade off in terms of stability and light weight are, to my mind, well worthwhile. I can carry a 20kg load in comfort for long days whether on estate track, hill path or on rough trackless ground.  It is pretty much waterproof and incredibly tough yet weighs a lot less than most backpacking sacs.  The 70 litre capacity is well enough for the great majority of trips, and all of the capacity is usable space.

Is there anything I’d change?  Well, yes, a couple of minor things.  There’s no exit point for a drinking tube on the sac, so the hose has to exit at the drawcord.  A small flap near the front of the sack would be useful to avoid an awkward routing of the hose.  Also (and this really is nit-picking) it would have been useful to have loops for attaching elastic shock-cord to stow crampons on the back of the sac.  It’s relatively easy to add these and I do tie in some shock-cord for this purpose in winter, but some loops would be useful.
The version of the AK70 I own is a second generation model, first introduced in 2007.  A third generation model is due in 2015 and seems likely to feature all-welded construction and new Kevlar fabric claimed to be even lighter and tougher than the present material.

The quality of material, construction and attention to detail on the AK70 don’t make it the least expensive rucsac around, but I feel that you do get what you pay for here. There are much lighter rucsacs around from the “ultralight” manufacturers which have become popular in recent years, but the Crux requires no compromises in packing to compensate for flimsy construction and looks as if it will outlast ultralight several times over.

If you’re looking for a high-quality, lightweight backpacking rucsack with a minimum of frills which will stand up to hard use then the Crux AK70 is very well worth a look.

Posted by Ian Johnston at 19:29 No comments: