I crossed to Tanera Mor, the largest of the main Summer Isles group, and as I approached, met quite by chance with friends  Simon and Liz who were travelling and paddling the north west.We enjoyed tea and home-made scones from the cafe (which is also the post office) whilst sitting in a sunny spot.  Soon it was time for me to go though - the weather to the south had clearly broken and we had a fairly long drive home through the rain. 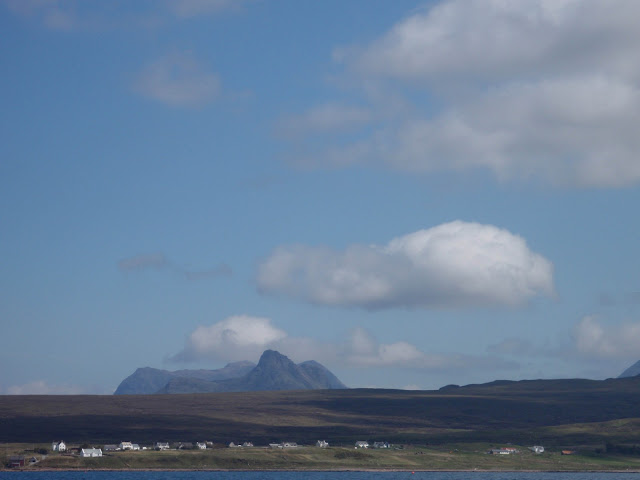 The northwest corner of Scotland continued to hold the fair weather; Cul Mor formed a scenic backdrop as I paddled across to Achiltibuie (the name possibly translates as high yellow place), the village a line of white houses typical of the far north west and the Hebrides. 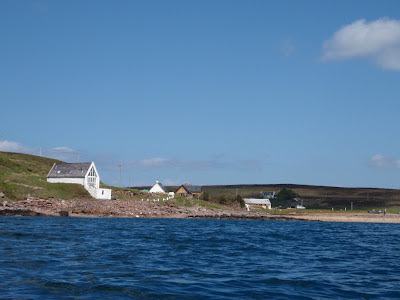 I soon arrived at the shingle beach and we packed up to drive home.  The paddling may have been over, but the road out of Assynt is one to savour.... 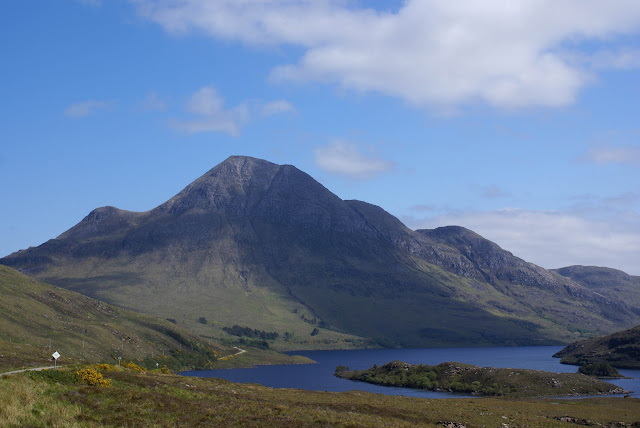 Looking to Cul Beag from near Aird of Coigach.  I had a memorable but hugely long day one summer traversing Cul Mor and Cul Beag from Knockan on the main Ullapool to Lochinver road (main being a relative term hereabouts!).  The drop between the two hills is very considerable and there's tough going on heather and rock.  I recall the heat reflecting back off the sandstone and ending the day red and hot - a bit like the rock.... 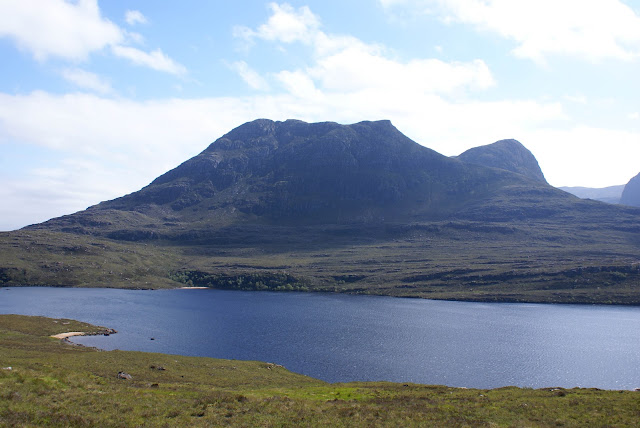 Across Loch Lurgainn, the rocky face of Sgorr Tuath rises sharply.  It's the truncated end of the ridge of Beinnan Eoin (hill of the bird - this usually refers to eagles).  The truncated spur beyond is Sgurr an Fhidhleir (pronounced "yealair" and meaning hill of the Fiddler), itself part of Ben Mor Coigach.  It's a complex and wild group of hills with no easy access, particularly from this direction. 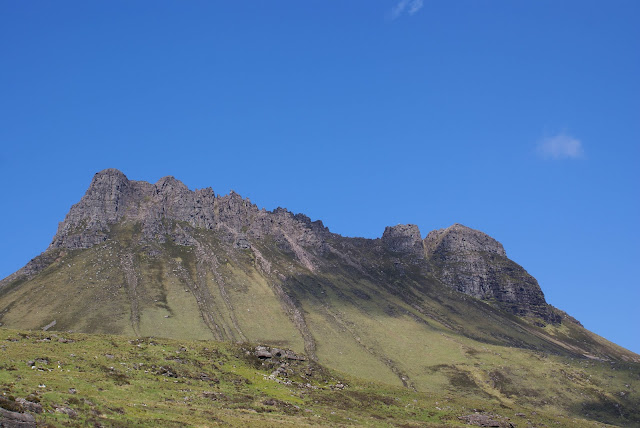 Rising above the road in crumbling splendour is Stac Pollaidh.  This small hill is just 612 metres high (a shade over 2000 feet) but from here always looks much bigger.  From Cul Mor and Cul Beag you look down on its spiny summit ridge.  Stac Pollaidh may be short but it's by no means an easy hill to climb - though so many folk were doing so that it became one of few Scottish hills to really need remedial path work to ease the erosion of thousands of boots.

It had been a superb trip to this most dramatic and beautiful corner of Scotland.  Sadly, this was almost the last good weather for over six weeks - we were so lucky to have been able to take advantage of it.
Posted by Ian Johnston at 21:31 3 comments: 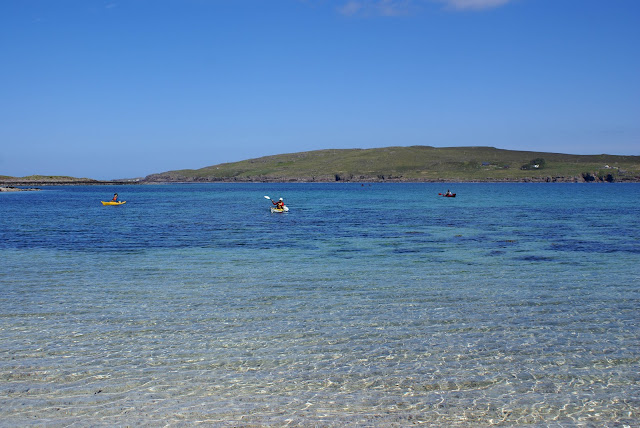 A group of paddlers rounded the point and headed for Isle Ristol's alluring beach.  They were a group from a club in Cumbria in the north of England and were on a multi day trip.  We chatted for a while about plans, the weather and the location, agreeing that there could be few better places to be on a day like this one. 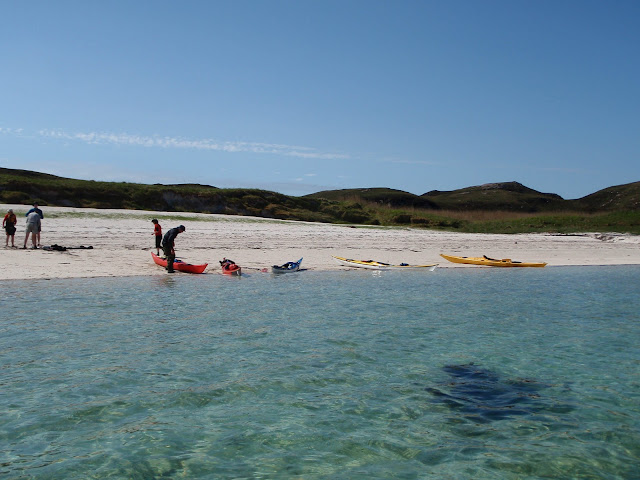 But it was time for me to head off.  There is plenty to explore on Isle Ristol and I'll return someday to do just that.  The area of the Summer Isles is probably one of the more popular sea kayaking destinations in northwest Scotland, offering sheltered paddling, great wildlife, super views and opportunities for much more challenging trips.  Small wonder that it's so popular despite being a long way from just about anywhere. 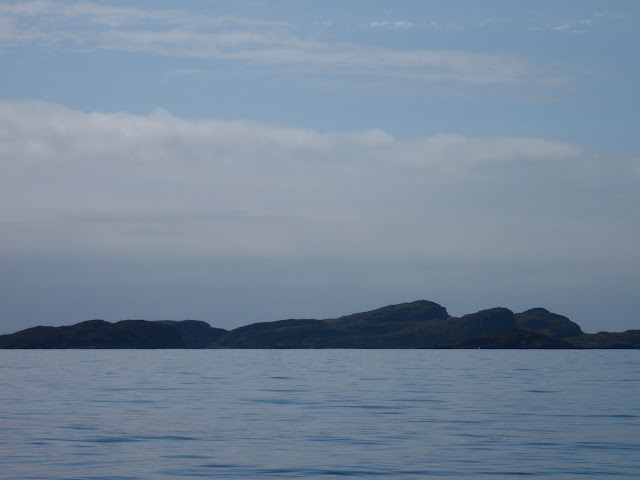 Passing through the Caolas Eilean Ristol (the Kyles (narrows) of Isle Ristol), the main group of the Summer Isles lay a couple of kilometres across a glassy sea.  The view to the south was increasingly hazy as the predicted weather change grew nearer.
Posted by Ian Johnston at 21:37 No comments:

Sea shells on a Summer shore 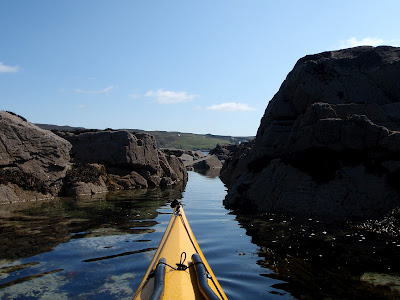 From the north tip of Isle Ristol I paddled eastward and squeezed through a narrow gap to find the stand-out feature of the island...... 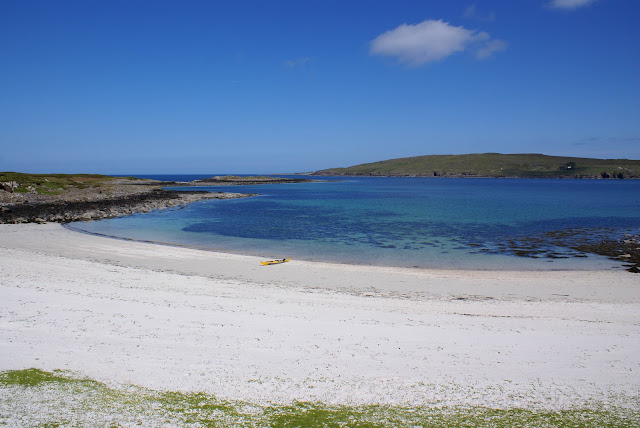 This glorious white shell sand beach.  Facing the mainland, in full view yet quite inaccessible without a suitable boat, it's a lovely spot.  The sun was picking out the aquamarine colours of the bay and reflecting dazzlingly off the sand. 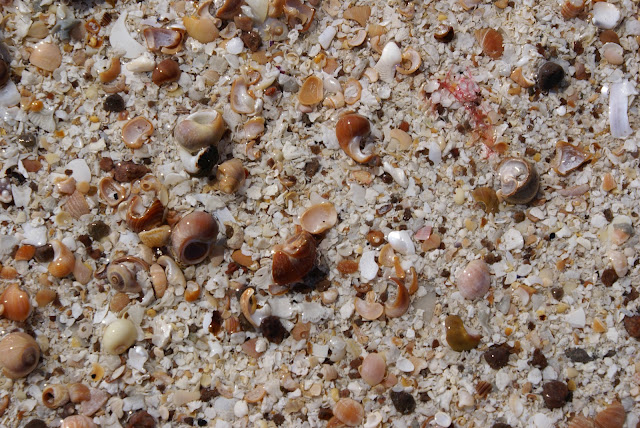 The top of the beach is fine sand but down near the tideline the building blocks become plain; shells being broken and worn by the action of the waves. 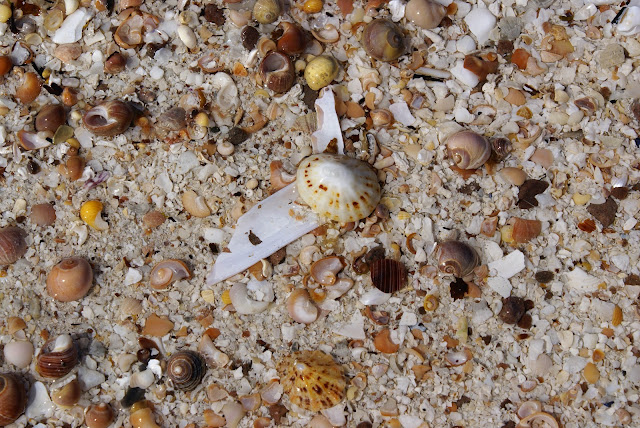 The shells of Whelks, Limpets and Razor Clams (known as "Spoots") were all easily identifiable together with many other types.  I wonder how far some of these shells have been transported to end up on the beaches of Assynt and the Summer Isles? 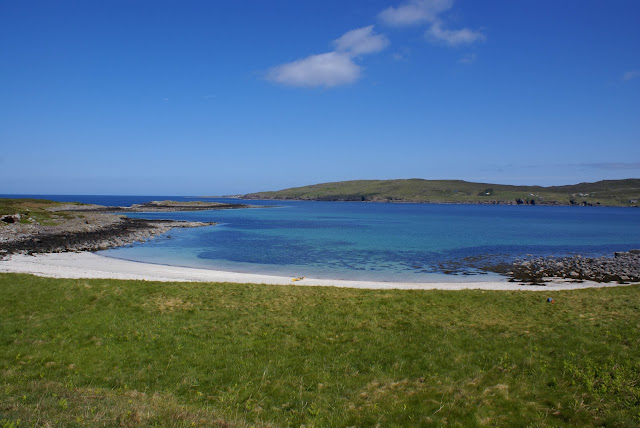 Above the beach is an area of "machair" raised above the sand by a few metres.  This grassland and the animals and plants which it supports are among the main reasons that Isle Ristol is a nature reserve.  Slightly apart from the main group of Summer Isles (the name refers to the practice of using the islands for summer grazing) Ristol seems more fertile and altogether less rocky.

I sat, then lay in the grass dozing in the sun in this glorious spot. 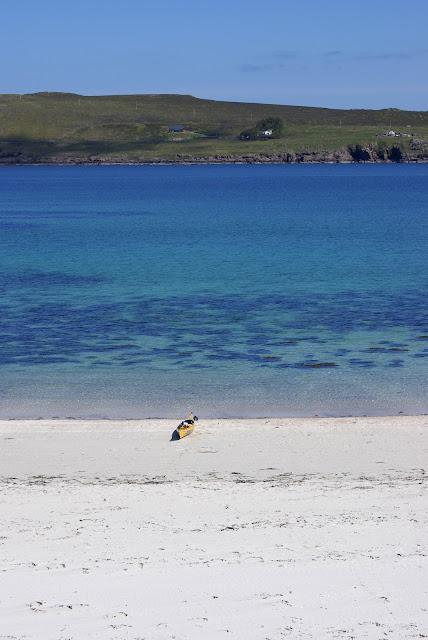 It would have been easy to fall asleep in the sun with the buzzing of insects and the songs of Skylarks the predominant sounds.  I remembered though that the tide was on the flood and my boat wasn't too far from the water.  Also, it seemed I wasn't the only paddler to see the beauty of the place....
Posted by Ian Johnston at 20:56 3 comments: 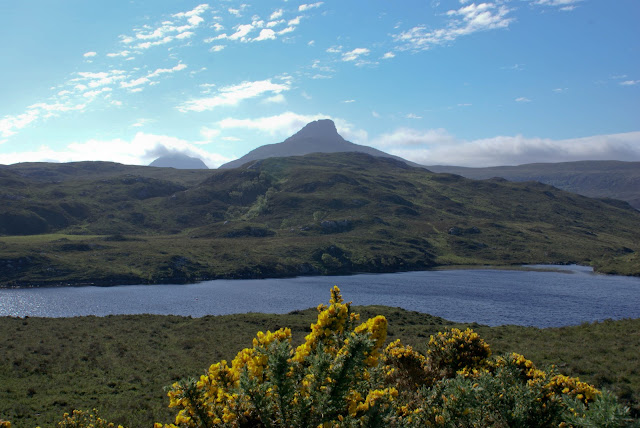 Heading south from Inverkirkaig towards Achnahaird, this view from near Aird of Coigach looks over part of the Loch Sionascaig group of interlinked lochans to Stac Pollaidh and beyond to the dome of Cul Mor. 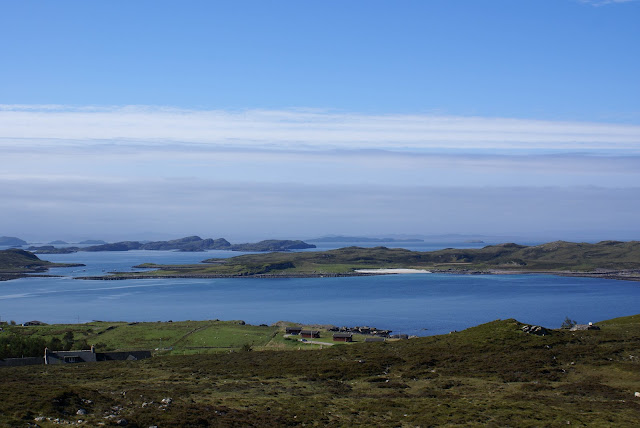 Taking the road to Achnahaird, we headed over the hill towards Reiff and Altandhu.  Cresting the hill, the view across Isle Ristol to the Summer Isles is breathtaking.  It's a justifiable popular area with sea kayakers, and the Coigach cliffs past Reiff are also well known for good quality sea-cliff climbing.

The first sign of the warm and settled weather breaking was evident in the sky, the bank of cloud lowering toward the horizon an obvious approaching weather front. 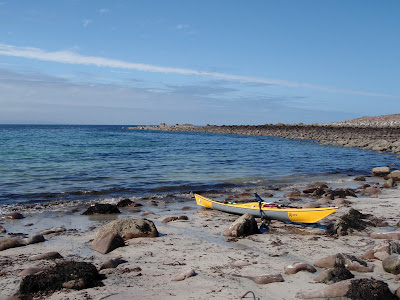 Reiff (the first of the days R's) is at the very end of the road, and although the shore is mostly boulders there are a couple of places to launch from.  Parking is very limited here and it would be easy to cause an obstruction. 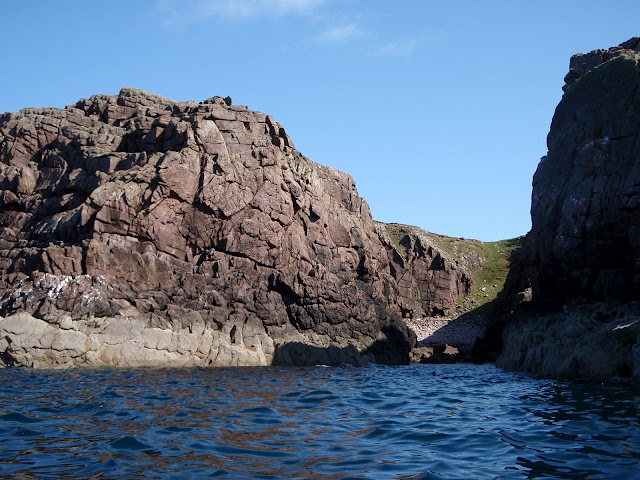 I paddled south along the Coigach shore, exploring the sandstone cliffs and tiny inlets.  The highly featured Old Red Sandstone can give climbing at all grades.  Rocks, the second of the day's R's. 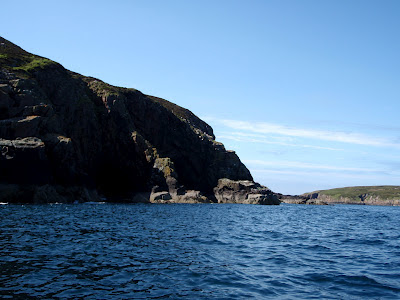 Near Altandhu (where there is a superb smokehouse), I headed for the north end of Isle Ristol (the third of the R's).  The north end is quite rugged with cliff and cave scenery; beyond is Eilean Mullagrach.

Isle Ristol (island with the horse valley) is a Scottish Wildlife Trust nature reserve. Attractive as the cliffs and caves are, they're not Ristol's stand-out feature.
Posted by Ian Johnston at 22:16 2 comments:

Bright and breezy in Loch Kirkaig 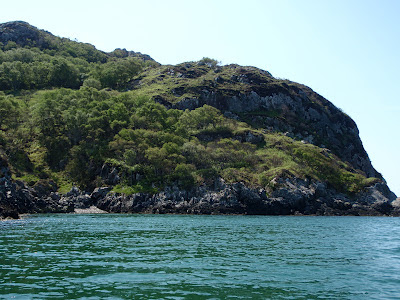 The following day had a forecast for continuing fine and warm weather, though with strong eastery winds.  On a west coast, it seems that this should give shelter, but the topology of the north west of Scotland tends to mean that easterlies blow directly along glens carved during the ice age and don't give sheltered conditions at all. 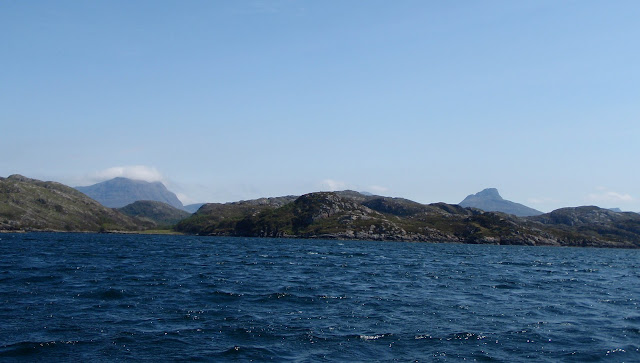 Getting around Rubha na Breige was a bit tricky.  The wind was blowing along cliffs on both north and south sides of the headland, causing turbulence directly off the point itself.  I had to brace a couple of times when gusts came directly down from the cliffs and was glad to get clear and into Loch an Eisg-Brachaidh.  The view ahead took in Cul Mor and Stac Pollaidh, two more of the distinctive Assynt mountains. 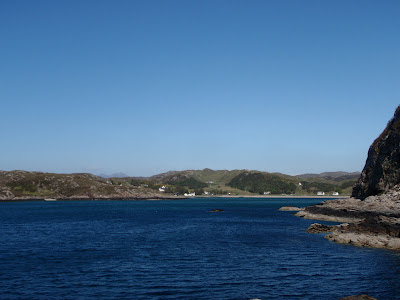 The wind seemed to be strengthening a notch so I cut short my exploration of the islands, settling for landing near the head of the loch.  Heading back out with the wind at my back I needed only rudder strokes to keep up a good speed; and this time I headed well offshore before turning back into Loch Kirkaig to avoid the turbulence.

A landing at a sheltered cove out of the wind gave chance to get my breath back after a couple of kilometres of paddling into the stiff breeze.  Inverkirkaig lay ahead, but until well into Loch Kirkaig, the view is missing that vital ingredient..... 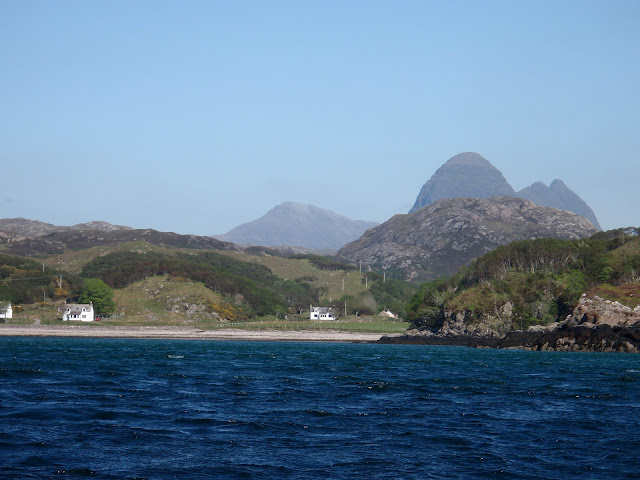 The backdrop of Suilven.

The push into the loch was quite a slow affair against the breeze, but with blue sky, blue sea and a cracking view I wasn't complaining! 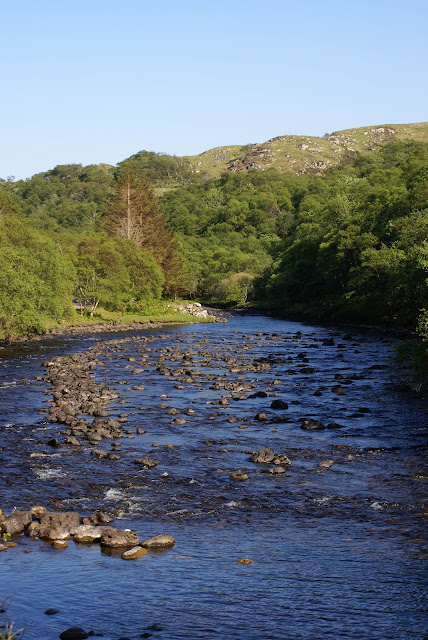 After dinner we strolled along the shore to the River Kirkaig, and watched trout in the pools below the trees. 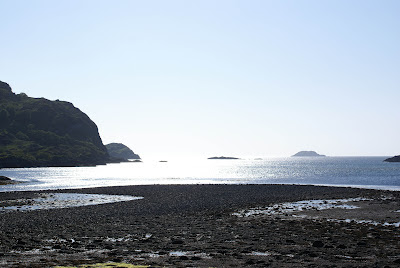 Walking back, the evening sun was dazzling, the blue sea turned silver beyond the shingle exposed by the tide.  We'd had a super few days in this beautiful part of the country; it remains among our most favourite places.
Posted by Ian Johnston at 21:53 3 comments:

In the pink at Clashnessie 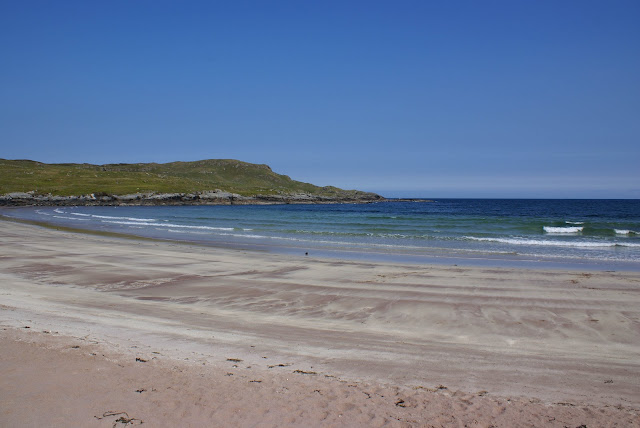 North of Lochinver the landscape changes subtly; Gneiss is replaced in parts by Old Red Sandstone.  Softer than Gneiss, it breaks down more easily and its warm colour is found on the beaches in this part of Assynt.  Clashnessie, out towards Point of Stoer, is one such beach and was almost deserted when we visited on a warm but breezy morning.  The name is more properly Clais an Easaidh (narrow glen of the waterfall) and there is indeed a waterfall above the beach.

Remains of a watermill can also be found near the small car parking area.  The area was once crofted but there are now less than twenty dwellings within a couple of square kilometres, some of them holiday rental properties. 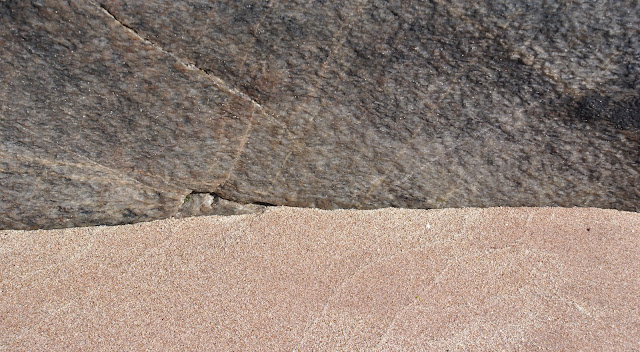 The pink sand is quite different to the white shell sand for which many of Assynt's beaches are famed, it is very fine and makes lovely patterns when washed by the tide.  The warm pink contrasted well with this Gneiss boulder on the beach. 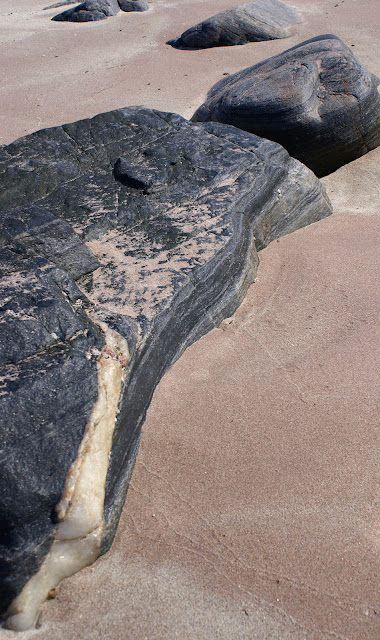 Three types of rock in this image; Old Red Sandstone forms the sand with banded Gneiss and a Quartz intrusion.

We strolled along the shore for a while absorbing the atmosphere of this lovely bay.
Posted by Ian Johnston at 18:48 No comments: