A tradition lives on at Johnshaven

We recently visited the Mearns village of Johnshaven during the annual NEOS Arts festival. the Mearns is characterised by red, fertile earth so evocatively described in the novels of Lewis Grassic Gibbon; and a rocky, exposed coast. Fishing still forms an important focus for the village, these days augmented by the numerous artists who have made the area home.

I mistakenly referred to Johnshaven as being an Aberdeenshire village - I'm very grateful to Clark Simpson of the Johnshaven website for the following local knowledge:

"Unfortunately everything south of Aberdeen is now being considered to be in Aberdeenshire. But "Aberdeenshire" as far as the Mearns is concerned is purely an administrative area. Historically and socially the Mearns has no connection at all with Aberdeenshire.The accent is different, the history is different and the culture is different. If anything Johnshaven is nearer in many ways to Angus. When you cross the North Water Bridge there is a sign "Welcome to Aberdeenshire - Historic Kincardineshire". This was a compromise on the part of the local authority where there was a reluctance, stubbornness even, to acknowledge that south of Aberdeen was in Kincardineshire and there was a long fight at the time of the last re-organisation of local government fully to keep the name. A partial victory was won but none of the media any longer refer to Kincardineshire".


Near the harbour slipway was a fine example of another art. 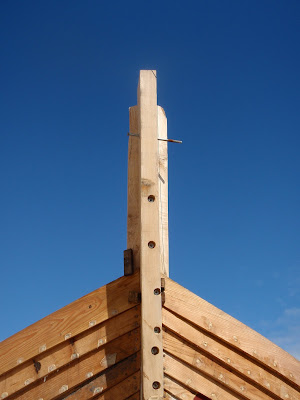 This fishing boat was being built next to the slip. It's a traditional clinker built craft, and the strong shape of the bow made a striking sight against the blue sky. The form of the forward part of the boat seemed to contain echoes of longships from across the North Sea with it's graceful line. The stern was something of a contrast, squared off to mount a strong rudder. 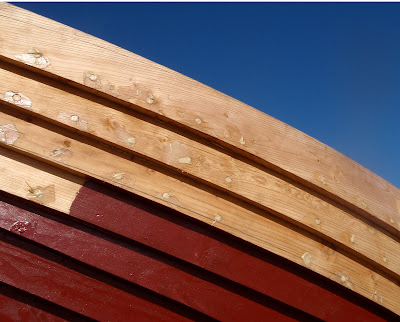 The first coat of paint was in progress when we visited, the colour in some ways seemed to echo the red earth of the Mearns. I'd like to have learned more about the boat, but there was nobody at work on it during the time we were in the village. Outside the harbour, a very similar boat was working creels; a handy craft perfectly designed for purpose.
Posted by Ian Johnston at 09:18 No comments: