The end of an extraordinary year 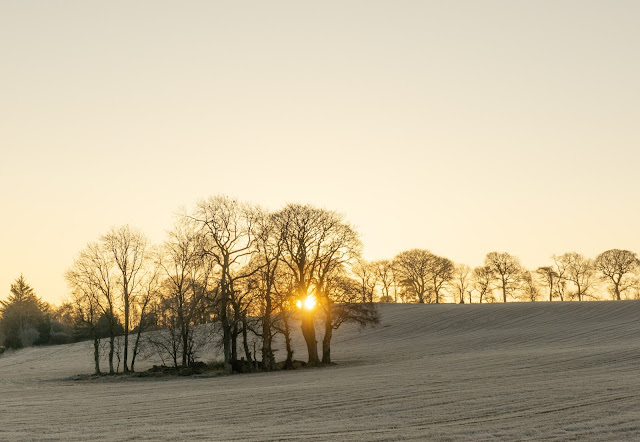 Although 2020 ended (perhaps appropriately) with a grim day of cold, grey and wet weather, there have been some beautiful winter days at the back of December here in the north east of Scotland.  Snow has come and gone, then fallen again - transforming the landscape each time. 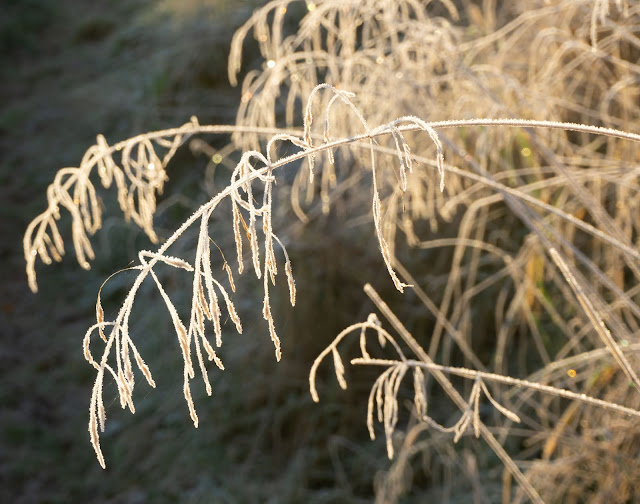 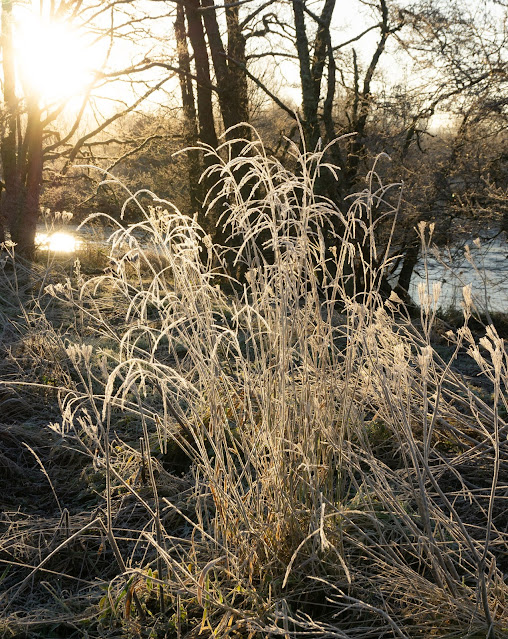 ......some like pale fireworks, lasting only until the low winter sun melts the frost.  As ever, I've found escape and respite during this most extraordinary and difficult year in the beauty and opportunity of what's close at hand.  We end the year in what amounts to a lockdown with travel and social contact with loved ones and friends curtailed - as has been the case been for much of 2020.  Hopefully 2021 will see an emergence from the pandemic which has so dominated this year. 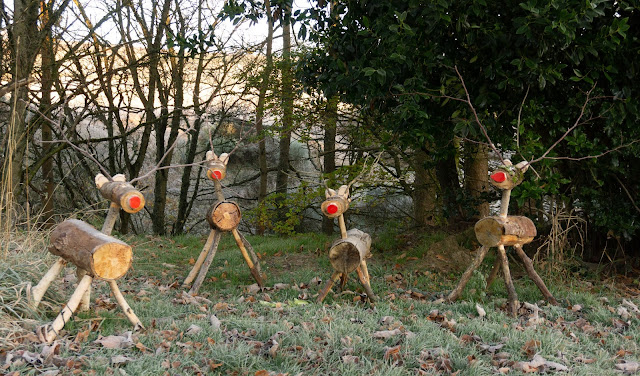 And so, as the year closes - from these guys and from me, I wish you health, peace and happiness in the coming year
Posted by Ian Johnston at 18:17 No comments: 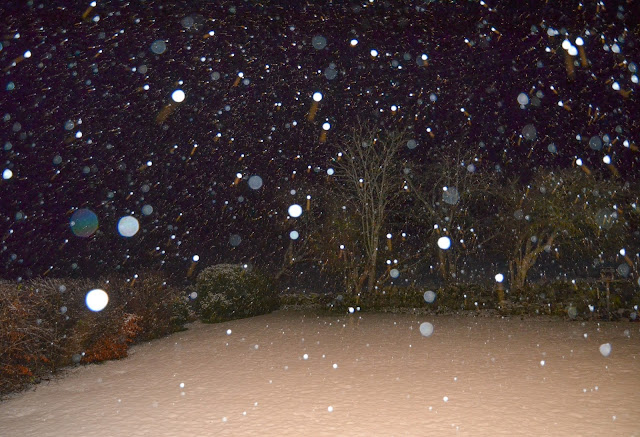 In the small hours of Christmas Eve I took a look outside....to see heavy snowfall on a northerly wind, just as forecast.  We'll have a white Christmas here in Aberdeenshire! 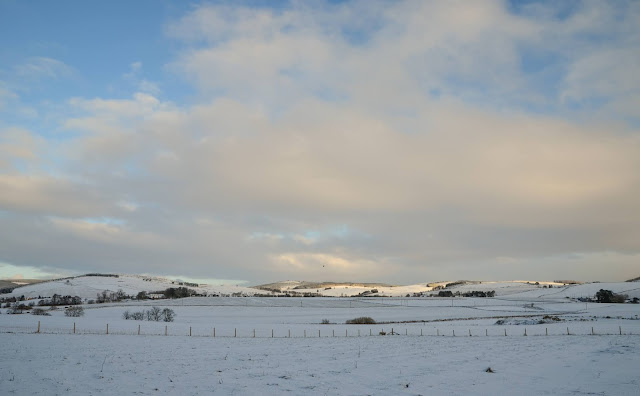 The landscape is completely transformed to dazzling white - just in time for a Christmas which will be very different for most people, including us, with limits on travel and the family one can meet with. 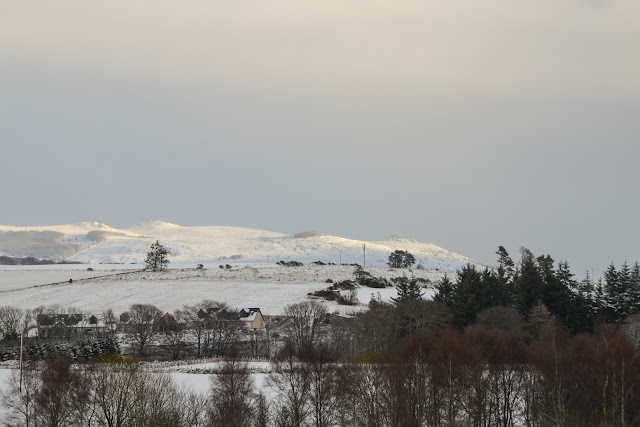 Chores done, logs split for the fire and a few last minute errands run, I took a long walk around the local area.  It was cold with a biting wind and a promise in the sky of further snow.  Bennachie looked very fine, dazzling white in the low sunshine just before sunset - at 3.25pm..... 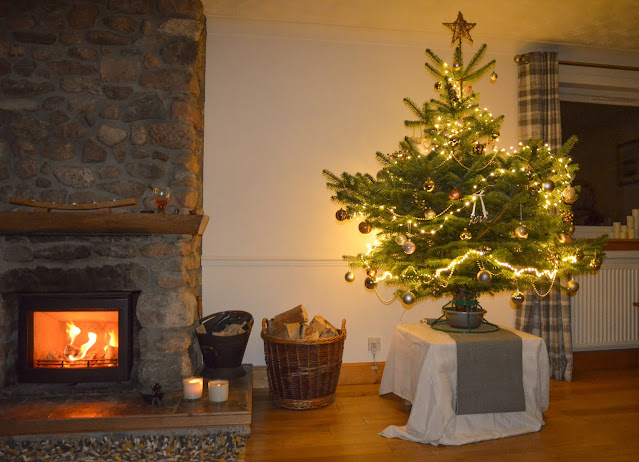 The woodburner is lit, the tree awaits a delivery of gifts by Santa Claus.....

So it just remains to wish you peace, health and happiness wherever you may be spending Christmas.

Reflecting on a Loch Etive journey 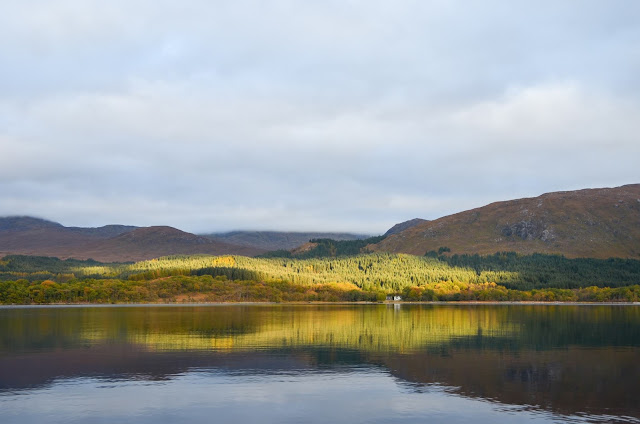 Sleep was a little disturbed at our camp on the shore of Loch Etive; the Red Deer stags continued their roaring all night, the sound echoing across the loch.  Just as dawn broke they seemed to quieten, allowing an extra hour's sleep for the humans.
We woke to a morning filled with promise; a light cover of cloud was already starting to be burned off by the rising sun.  We were pleasantly surprised that there was no condensation on the tents and no dew on the ground, allowing us to pack tents away quickly. 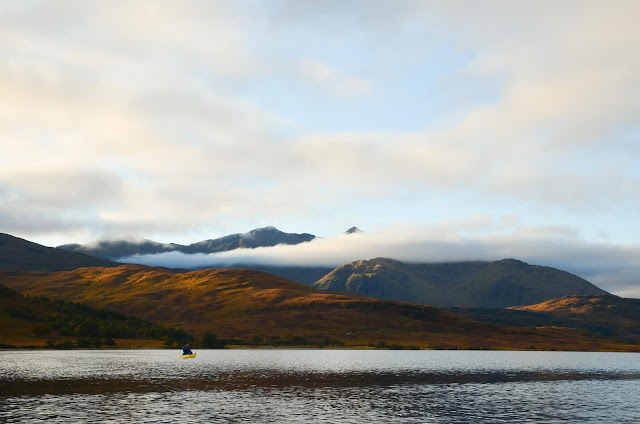 We got on the water before 0900 and headed out to the centre of the narrow loch.  Behind us the ridges of Ben Cruachan looked very atmospheric with streamers of morning cloud hanging in the corries of that great and complex hill. 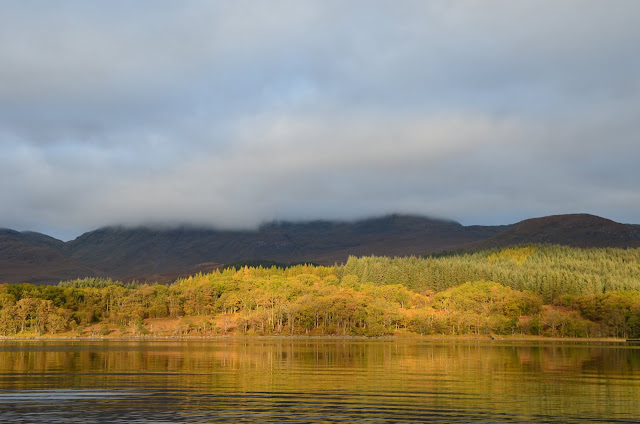 The north west shore of Loch Etive is more wooded than the south eastern side and was beautifully lit by the morning sunshine, gorgeous shades of autumnal colours were picked out wherever sunlight broke through. 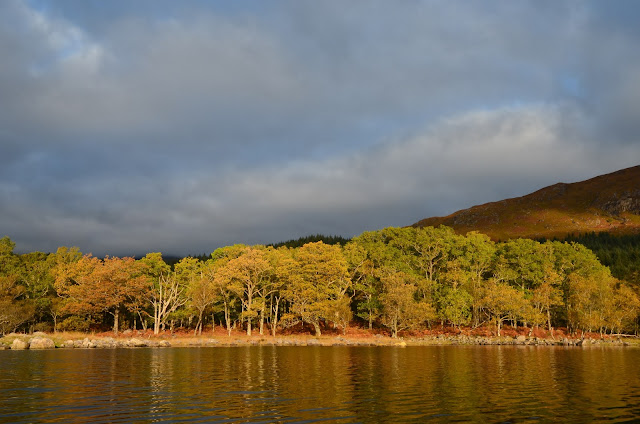 We headed over and paddled slowly up the shore towards the head of the loch alongside woods of oak, holly and birch, set off with a deep russet carpet of brackens which had already "gone over".  We felt that the morning could scarcely be better....until we turned a small headland and got the view we'd come for. 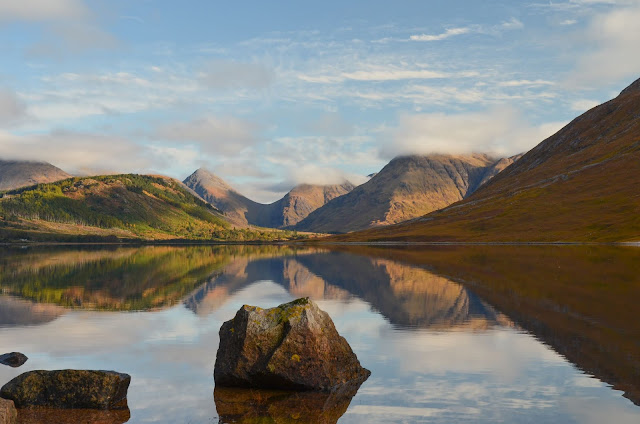 Landing on a shingle shore we just stood and stared before reaching for our cameras.  The dramatic hills at the head of the loch were reflected perfectly in the still water and we took image after image after image.  I'm still not sure whether I prefer the images with the shoreline boulders...... 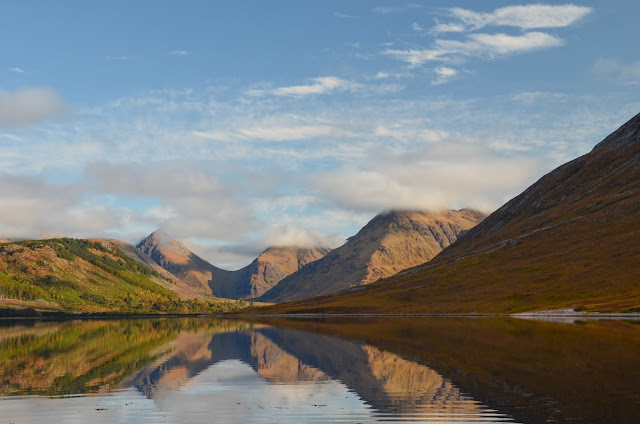 ......or the ones without the boulders!  The  head of Loch Etive lies between the Blackmount and Glencoe and the hills in view are some of the best of both those grand ranges.  The sharp peaks at the ends of Buachaille Etive Beag and Buachaille Etive Mor are prominent, with the passes of the Lairig Eilde and the Lairig Gartain between them.  In shadow on the right of this image is the base of Ben Starav, a hill I'd put in my top ten of Munros...it was all pretty special!
We sat for a considerable time just absorbing the views and enjoying the stillness of the morning - after our initial amazed exclamations about the view, words seemed a little superfluous.  Coffee was taken along with snacks to prolong the sitting around, but eventually we knew we'd have to get back on the water if we were to take advantage of the ebb tide further down the loch. 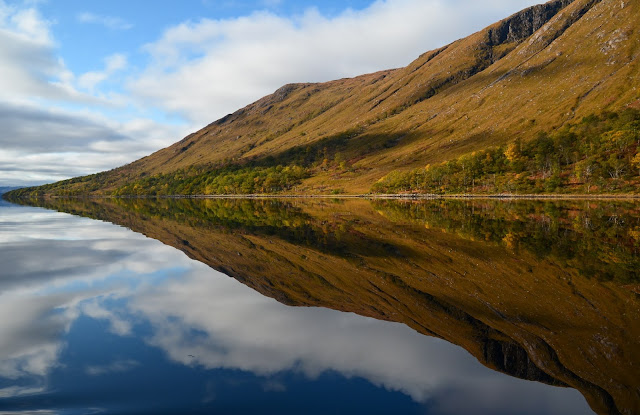 The views as we headed back down the upper part of the loch were hardly poor either!  What tiny breeze there had been had died completely and we paddled on absolutely still water, the only movement was that created by our paddle strokes - and we felt almost guilty when we created ripples on such perfection! 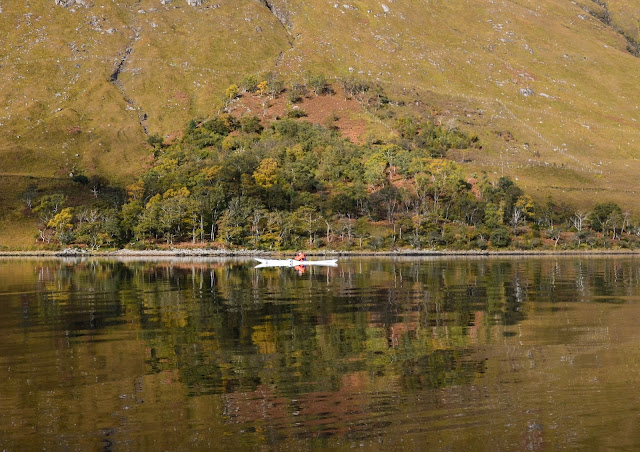 Stands of trees on the shore created great reflections; at times these seemed similar to the fractal patterns in children's kaleidoscopes.  I positioned myself to photograph first Allan..... 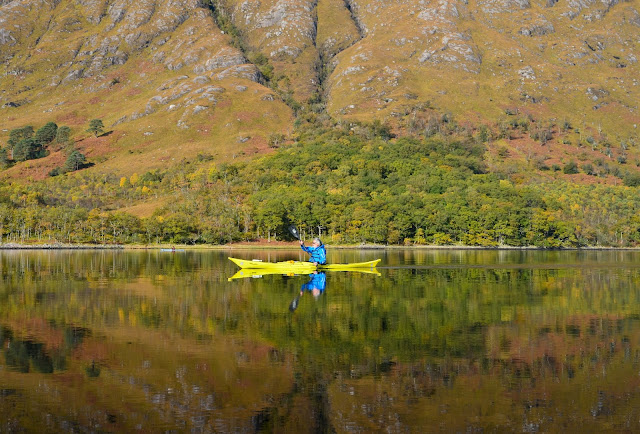 ...and then Raymond in the middle of these reflected geometric patterns. 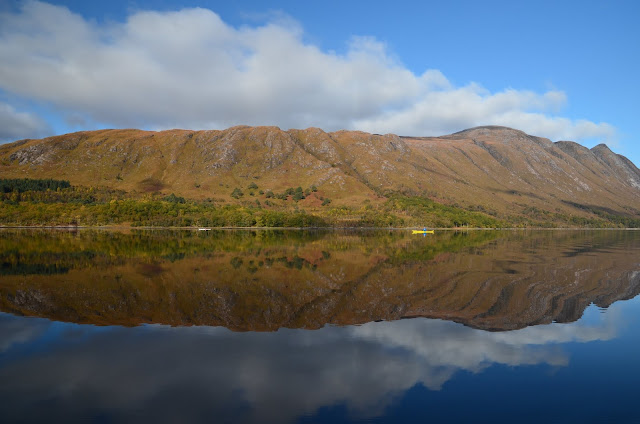 A wider view shows just how perfect this morning was as we paddled under the sweep of Ben Trillieachan (hill of the sandpiper - though many climbers who've had experience of the famous slabs on the north end of the hill would claim it's "sandpaper"!). 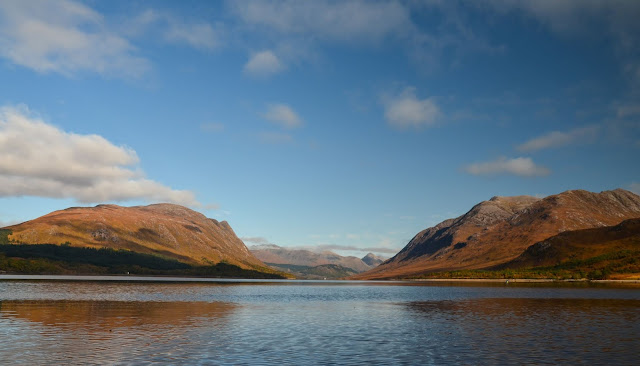 As we left the narrow upper part of the loch we took a last look back at the view.  Our passage back to Taynuilt was assisted by the pull of the ebb tide and we averaged a healthy 8.5km/h without much effort, popping through the narrows on the last of the ebb.
This had been a great overnight exploration of Loch Etive, we'd had great views and amazing wildlife encounters as well as a comfortable camp -  it's a loch I know that I'll return to paddle again.
Posted by Ian Johnston at 18:37 No comments:

Big birds and big beasts on the shores of Loch Etive 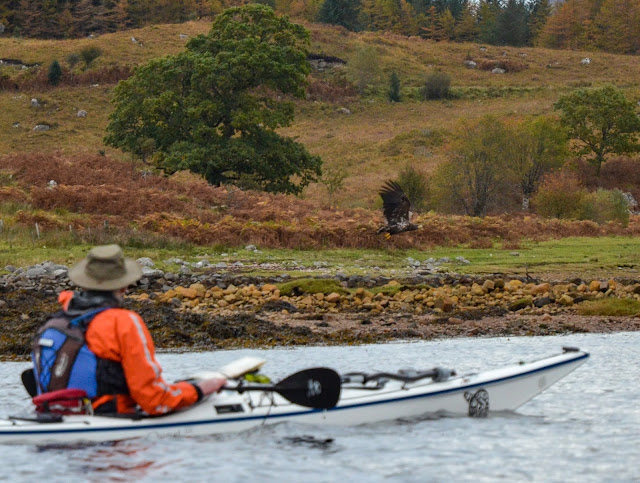 We had little time to dwell on the fact that the brilliant autumnal sunshine had been replaced with a sheet of grey cloud.  As we paddled along the shore we became aware of two Oystercatchers and a gull going absolutely bonkers and dive-bombing a patch of beach.  Such behaviour usually indicates the presence of a predator, and in this case it was two of the most spectacular predators.

We were able to paddle slowly up to get really close views of two White Tailed Eagles (Haliaeetus albicilla) before the huge birds lifted off.  But, amazingly, they landed just a few metres along and seemed completely unfazed as we drifted past.  We thought that this was an adult and one of this year's young, the juvenile bird was mostly brown.... 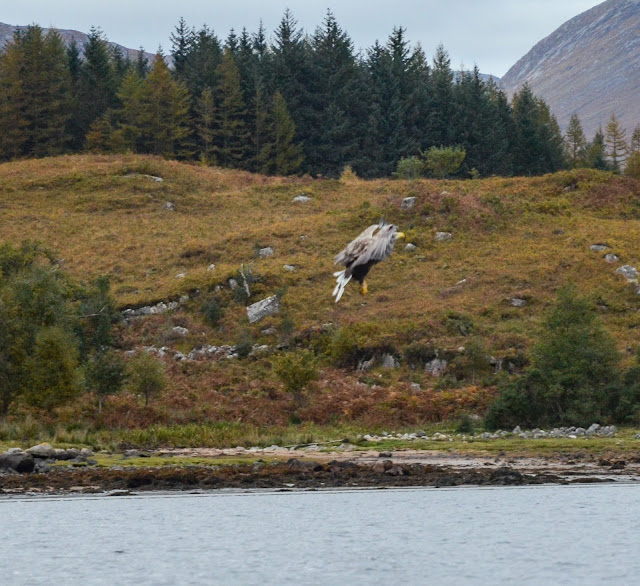 ...while the adult was grey around the wings and mantle with the distinctive white tail of a mature bird.  We were treated to several minutes of very close encounter with these impressive birds and it was clear that they weren't at all bothered by us as long as we kept a comfortable distance and stayed quiet. 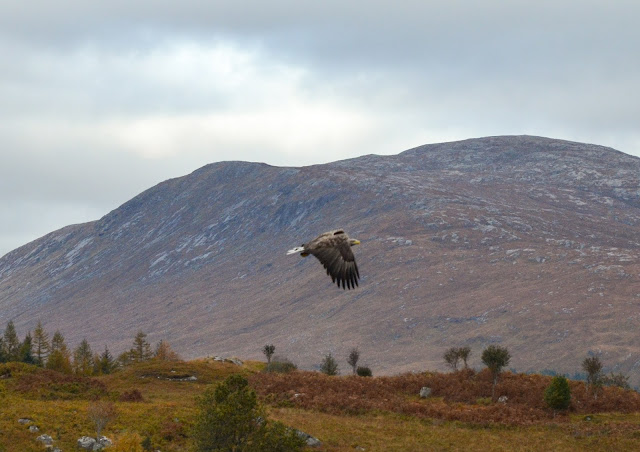 Eventually the juvenile bird got fed up of being dive-bombed by an irate gull and took off over the loch, followed by the adult bird which gave us a great fly-by.  Wildlife encounters like this are such a privilege - and to be treasured.  As it turned out, our wildlife experiences were far from over for the day. 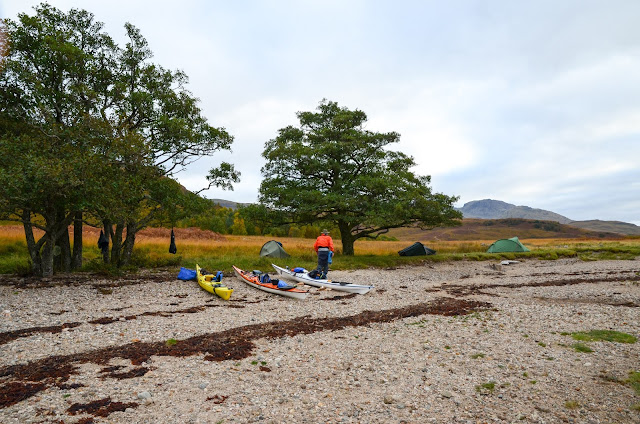 We'd started looking for a good camping spot from fairly early in the afternoon; this trip was never about clocking up distance and all about an exploration of a sea loch all of us have walked above and along but not paddled.  We settled on a spot on the shore with good level ground around a stand of Alder trees, got the tents up and split up to scour the shore for driftwood for a fire.  We were surprised at the amount of wood along the tideline this late in the year but reasoned that for months through Spring and Summer there had been no visitors until the lockdown restrictions were lifted. 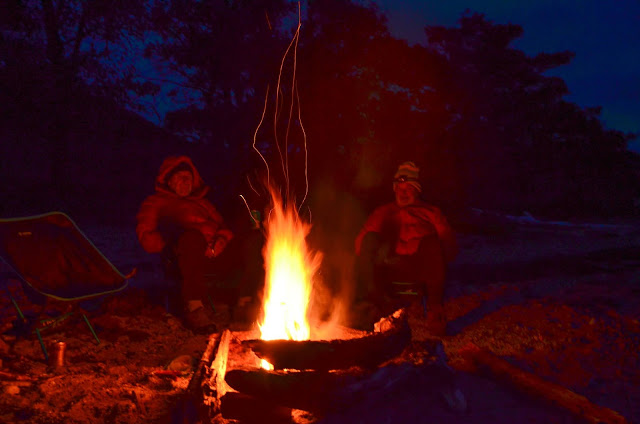 After a superb dinner of home-made casserole (accompanied by a rather good red wine - no point in suffering!) we got a fire lit below the high water mark just as darkness was gathering.  As it turned out, I'd put the fire a little too far below the tideline and we had to move the whole thing up the beach as the Spring tide rose and rose!

Our other wildlife experience began as dusk was falling.  This trip was done in mid-October and the Red Deer rut was in full swing, stags roaring all around us.  As darkness gathered the wind had dropped to nothing as can be seen by the sparks and smoke from our fire, and the bellows of these impressive animals echoed across the water and from the hillside above the camp - it was very atmospheric!  We turned in late in the evening thinking that the stags might settle after a while, but the iconic sounds continued right through the night.  The stag with the deepest, hoarsest, loudest roar of them all seemed to be holding ground on the hillside just above our camp - and thankfully stayed there.  Stags fired up during the height of the rut can be a fearsome prospect and we didn't fancy coming up close in the dark!

After a Spring and Summer when we hadn't been able to get out in the kayaks it felt that we were getting the most special of experiences.

Posted by Ian Johnston at 20:30 No comments: