This is a catch-up post from early summer, testing out a tarp on the hills above the house on an overnight trip.  These quick trips have become known as "microadventures" - but they're still overnight trips! 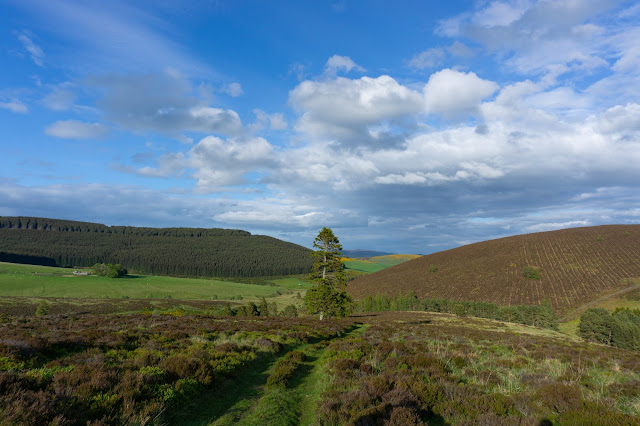 Allan and I set out from Terpersie on a lovely evening of bright sunshine. Whilst not particularly warm, the weather was fairly settled with the forecast of a cool and clear night to come.  At just two kilometres from home, there wasn't far to travel!  We set a leisurely pace and climbed the ridge known as the Fouchie Shank on a grassy track. 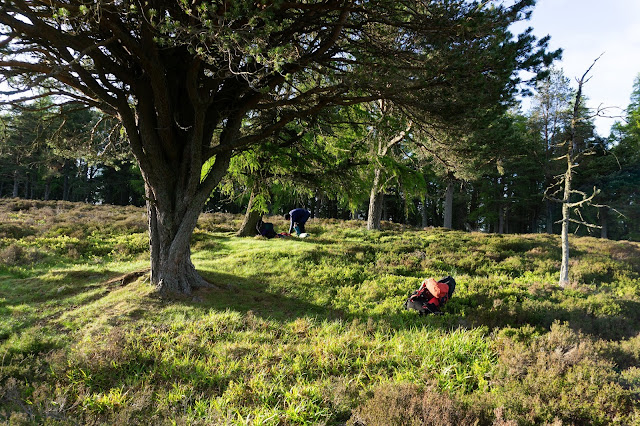 It didn't take us long to reach a spot I'd noted several times as offering a nice camp or bivvy spot.  At the edge of a wood which covers part of the upper ridge there are a number of decent pitches - in fact the difficulty was choosing the best of them rather than finding anywhere to pitch.  Allan had brought a tent and chose a spot under a large pine tree just outside the wood where there was good flat ground. 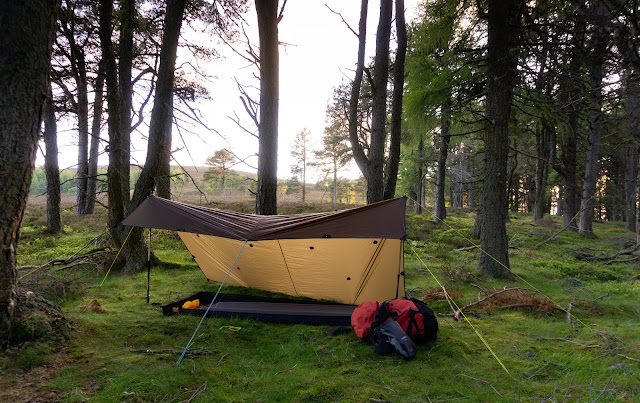 I was trying out my new tarp for the first time and chose a spot at the very edge of the wood.  Having tarped a long time ago, for some reason (midges mostly!) I'd switched to tents and not used a tarp for many a year.  My interest had been rekindled not by weight considerations - the combined weight of tarp, groundsheet and rigging isn't that much different to really light tents these days - but by the experience of sleeping in the open again.

Looking at various designs and configurations I'd decided on an Alpkit Rig 7 as seeming the best combination for what I envisaged.  Regular readers of this blog will know that I'm a bit of a fan of Alpkit products anyway, but what interested me about the Rig 7 was the lift points along the face of the tarp and the 16 eyes around the edge which are all reinforced with "hypalon" - which seems to be a very tough and strong relative of neoprene, with enough stretch to allow walking poles etc to be used with no risk of ripping the hypalon or the tarp fabric.  The fabric itself is 30 denier PU coated cordura with a ripstop weave, and comes in two colours; "kelp" as pictured here or a "chilli" red shade.  Dimensions of the Rig 7 are 2.4m x 2.8m and the pitching options are limited only by your imagination!  Guy lines and pegs aren't included, but Alpkit do a bundle which includes these items.  I used mainly 3mm guy lines which worked well and carried a long length of 4mm line which could have been used as a continuous ridgeline for rigging between trees.  the Rig 7 is one of a family of tarps with similar characteristics but differing sizes; from small solo tarps to group shelters.

My groundsheet was an "Oooktub" from Oookworks in a 220cm x 90cm configuration which has an ingenious design to form the tub shape when pegged out.  It's made of tough PU coated nylon and looks to be able to really keep the wet stuff at bay. My sleeping mat was an Exped Downmat 7 UL, one of the best pieces of outdoor kit I've ownd.

All up, my rig for this trial run was 1100g for the tarp, rigging, pegs and groundsheet.  As mentioned, this isn't much different from a lightweight tent; though it is noticeably lighter than my usual tent of choice, the full spec Terra Nova Voyager at 2100g. 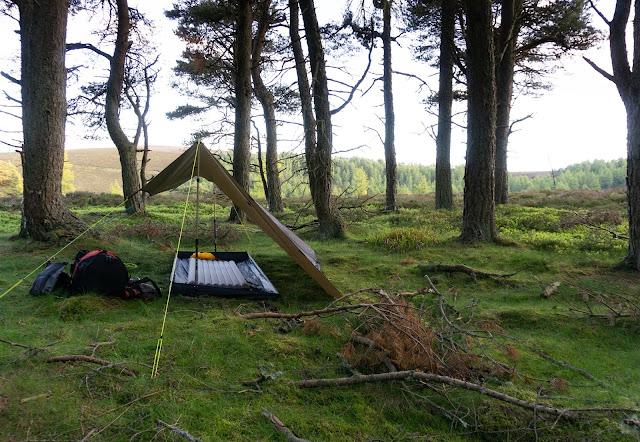 As the night was forecast dry I chose to rig the tarp with an open frontage to maximise the experience of sleeping in the open.  there are so many ways in which the Rig 7 can be pitched that there should be an option for just about any weather - there are some tips on the Alpkit website for some simple rigs.....there's even a name for the art of pitching - "tarpology"!  I was glad I'd tried out a number of pitching arrangements at home; this gave me a start in deciding where and how to pitch for the trial run. 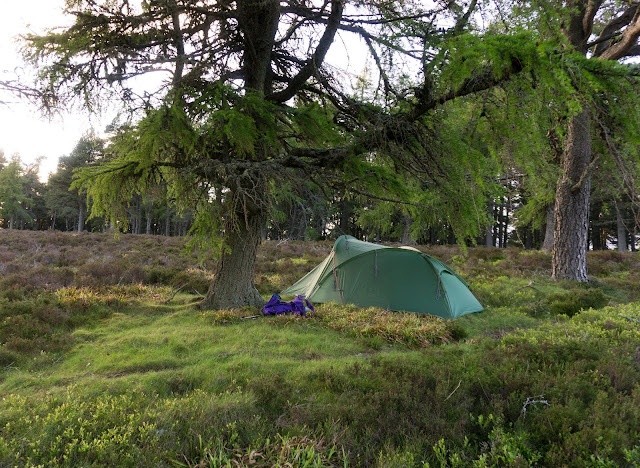 By coincidence, Allan was also using an Alpkit product; the Tetri; a two person tent with a tried and tested design.  Weight here is 3kg, so quite a difference.  That said, had the evening been very wet or midgy a tent would have been the preferred option! 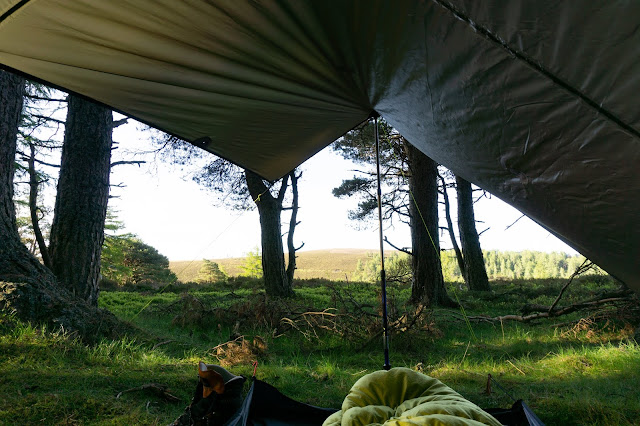 After a bit of supper I settled down for the night, the sun not quite set on an early June evening.  The feeling of being out in the open is a real contrast to sleeping in a tent; even though I habitually leave the door open on fine nights.  Here, I was immersed in the wood and was able to see and hear the place settling for the night as part of it rather than being sealed away and slightly separated. 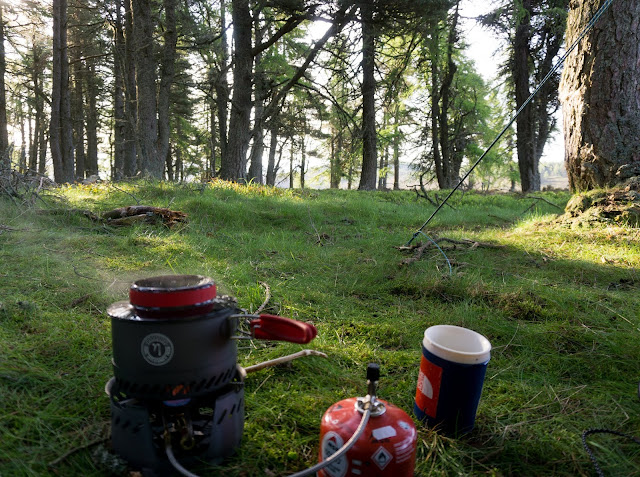 I slept pretty well too!  Deer moving past woke me briefly and a cuckoo called intermittently right through the night, but then in June the "night" here in Aberdeenshire is just a couple of hours of dusk rather than darkness.  For the first time, we heard the sub-song of the cuckoo, a chuckling low laugh between the familiar two-note call....probably it was amused by waking us?!

First thing on waking was the realisation that I was still "outside", immersed in the wood with early morning sunshine dappling through the trees.  I had been warm inside a down bag despite the night being quite cool and the tarp had kept any dew off me. There was little or no condensation on the sleeping bag; on colder nights I'd probably add a lightweight bivvy bag to the kit list.  Second thing was one undoubted advantage a tarp has over a tent - the ability to roll over and put on a brew without leaving the sleeping bag!  In fact two cups of tea were enjoyed from the comfort of my bed before getting up. 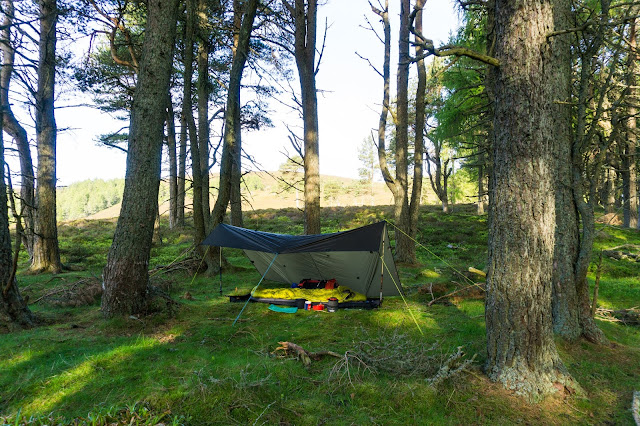 It was all in all a very successful test of the tarp and groundsheet and a very pleasant "microadventure".  I'll be using this set-up more often once the midges have disappeared and will write a more informed review once I've tarped in less favourable conditions.  For now, it's enough to say that it was a very enjoyable experience.
Posted by Ian Johnston at 11:56 No comments: 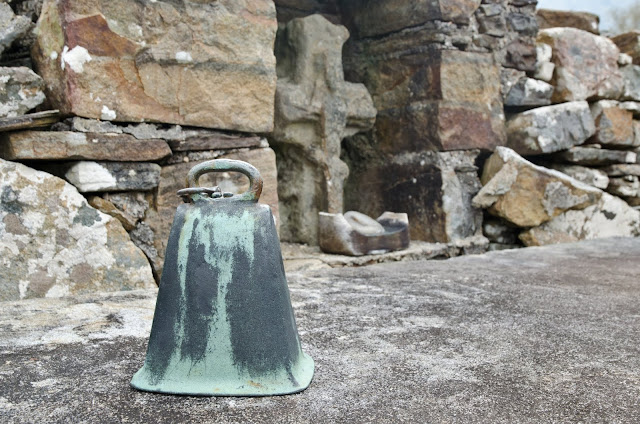 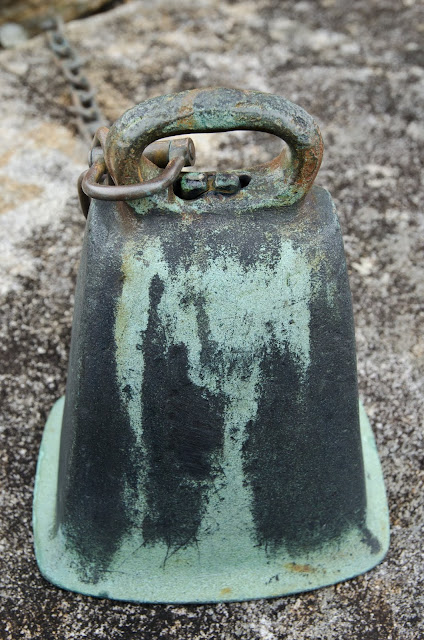