Heading out for a fish supper 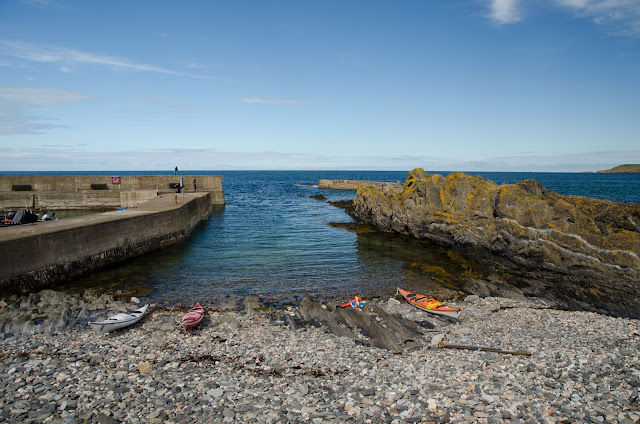 While the full lockdown and then the 5-mile travel guidance has been in place sea kayaking has been off the agenda.  But, as the restrictions ease, there's opportunity to get out on the water again.  Lorna, Allan and I met on a sunny afternoon at our usual launch spot at Sandend for a short excursion. 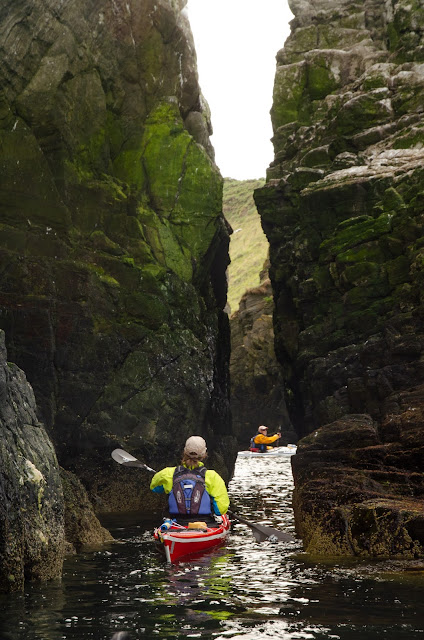 Heading west from Sandend brings great paddling straight away with a series of channels and leads behind rock stacks.  On most days the narrower gaps are inadvisable due to swell surging through, but a combination of low swell and proximity to high water offered the opportunity to paddle all of them.  this particular gap is just shoulder width at its narrowest - but went easily. 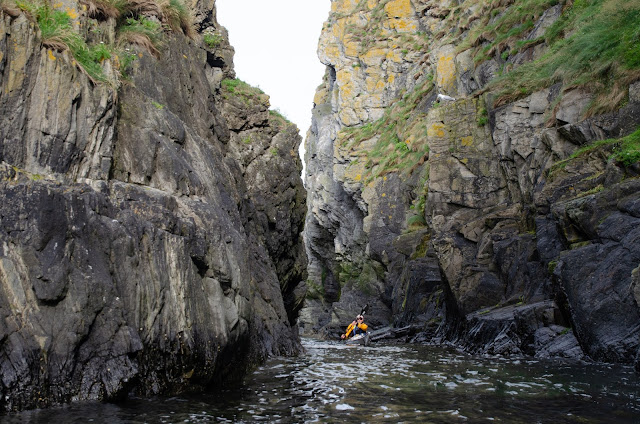 It's a great little area to weave through, and full of interest..... 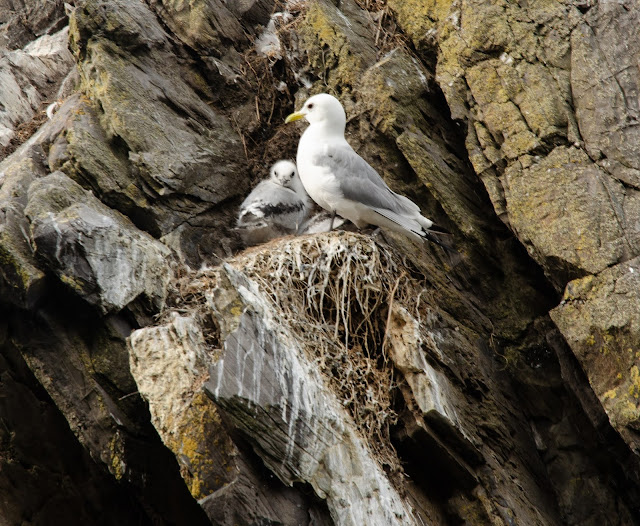 ...as well as wildlife.  The last time we were able to kayak here the seabirds were just beginning to scope out the cliffs.  The breeding season is now nearly over, chicks like this Kittiwake (Rissa tridactyla) are well grown and on the way to fledging.  The Moray Firth is rich in seabird colonies and those on this stretch of coast are remarkably relaxed about passing kayakers - provided one moves slowly and quietly there's no agitation at all from the birds. 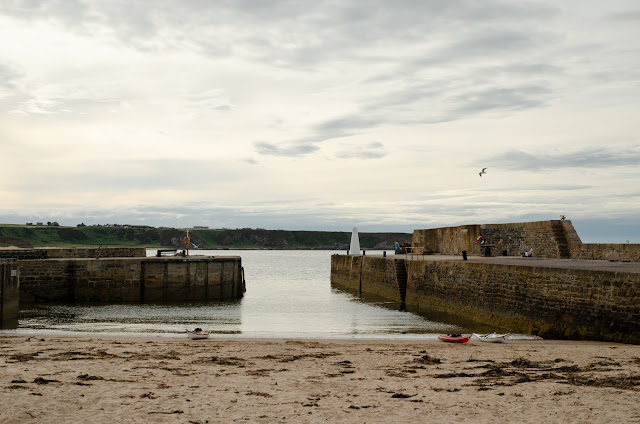 We continued west and crossed the county boundary from Aberdeenshire into Morayshire before pulling in at our outward destination of Cullen.  A sandy beach in the outer harbour makes for an easy and convenient landing.  we had a particular reason for making Cullen the target of our evening - Allan made a phone call and we walked up to the town's main street..... 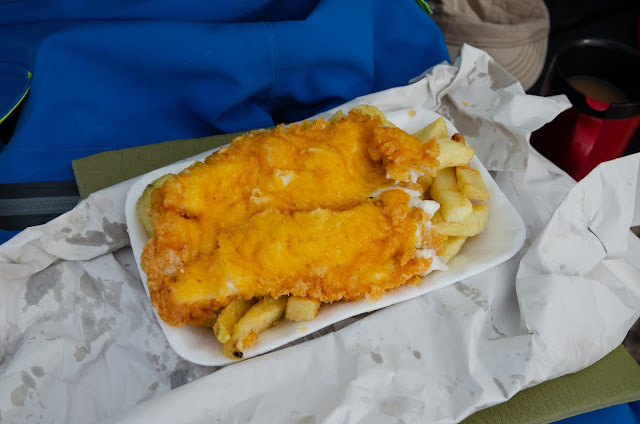 ...to collect an order of fish and chips from the excellent Linda's Fish & Chips, which we took back down to eat on benches overlooking the harbour; dining out doesn't get much better than this!  Suitably refuelled, we then set out back towards Sandend, but part way back found that we weren't the only ones with eyes on a fish supper..... 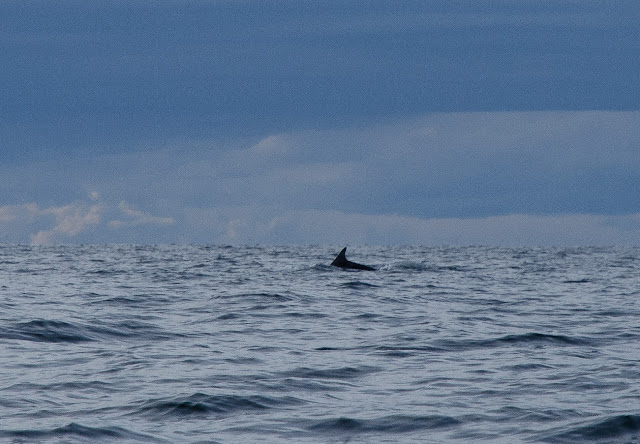 Six or seven of the Bottlenose Dolphins for which the Moray Firth is famous treated us to a fairly close pass with much jumping and tail slapping as they hunted their own fish for supper - it's such a treat to share space with these creatures, and seeing them on this first outing back seemed extra special. 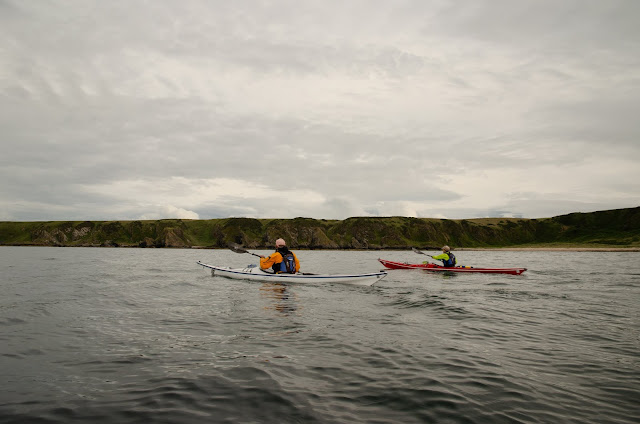 What little breeze there was died completely as we approached Sandend making for a tranquil, relaxed end to our evening paddle.  After so long off the water, it was good to be back!
Posted by Ian Johnston at 10:06 2 comments:

Physically distanced above the Gairn 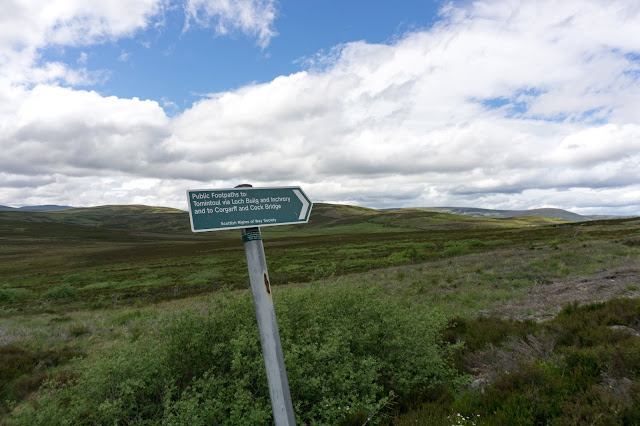 The gradual easing of lockdown has permitted travel farther afield for recreation and though our local "patch" has been full of interest and given great days of walking, it has been good to have some more freedom.  I met Allan and Lorna for a walk in the final days prior to the travel restriction end - we met up above the River Gairn which is more than the suggested 5 miles from home, but still local - and we have to travel more than 5 miles to shops anyway!

A SWRS sign leaning at a jaunty angle (it sees huge piles of snow here in the winter) indicates the route of a path to Tomintoul via Inchrory and the Avon and to Corgarff - the B976 Crathie to Gairnshiel road where we parked is on the line of a military road constructed in the 1700's. 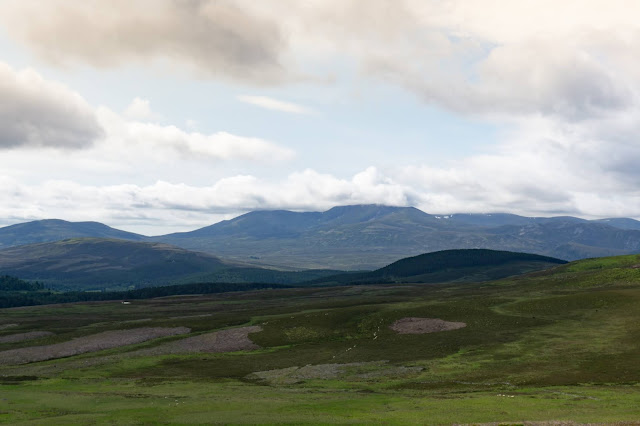 A 450m high starting point gets you good views right from the start!  An overcast morning was forecast to develop into a very warm day and off to the south the cloud was already lifting from the summit of Lochnagar as we set out. 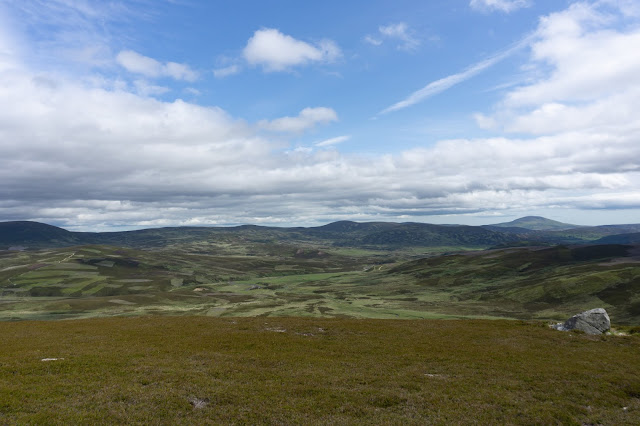 A gentle climb on an old track through the ruins of a township,over a subsidiary hill and then a couple of kilometres across wind-clipped heather soon brought us to the one hill on our planned route - Tom Breac (Speckled Hill).  I've climbed this hill previously and remarked on the views it offers - and today they were equally special. The sense of space and big sky is a real feature of this part of the eastern Highlands, it really is great walking country.  I was surprised to look back through the blog and see that my last visit here was 2011, where does the time go? 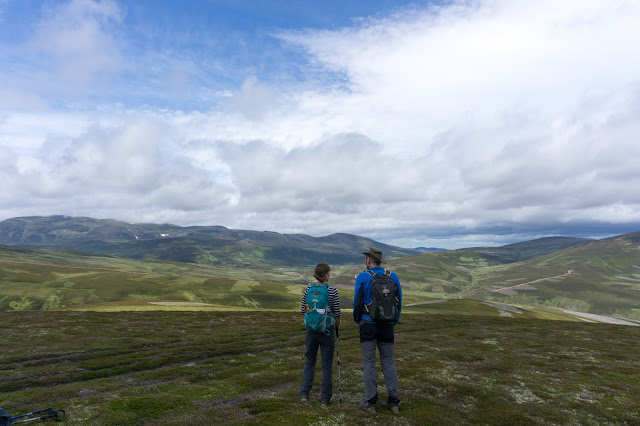 We stopped for coffee and to take in the view near the 696m/2283ft summit, a place which seems to be rarely visited by hillwalkers but more regularly by estate workers, there are a number of vehicle tracks here.  The sprawling mountain in the distance is Ben Avon (pronounced A'an), a giant among hills and which is visible from all across the north east when you get to any sort of height. 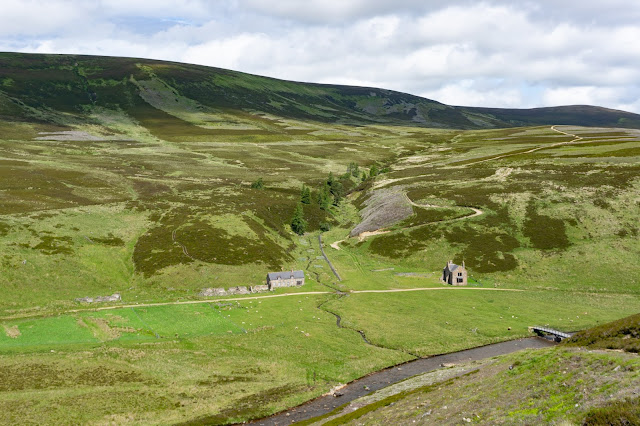 We were reversing my 2011 route and can report that this clockwise option is the better  way to climb Tom Breac, it's preferable to the stiff climb out from the valley of the Gairn.  As we descended the weather became very warm and the cloud cleared.  Lorna spotted a large Adder moving off the track just in front of us - sunny mornings are a good time to spot these beautiful creatures as they warm up on the stones of tracks.

We headed down to the River Gairn, a wild and relatively unfrequented river, towards the remains of Corndavon Lodge which must have been quite a place in its heyday - half of the building was destroyed by fire.  What remains is occasionally used as a luncheon spot for shooting parties on the Invercauld estate.  the splendid bridge over the river is new since 2011, my last crossing was on a shoogly wooden affair.  That said, an estate vehicle chose to ford the river rather than cross the bridge as there is some erosion near the ends of the structure. 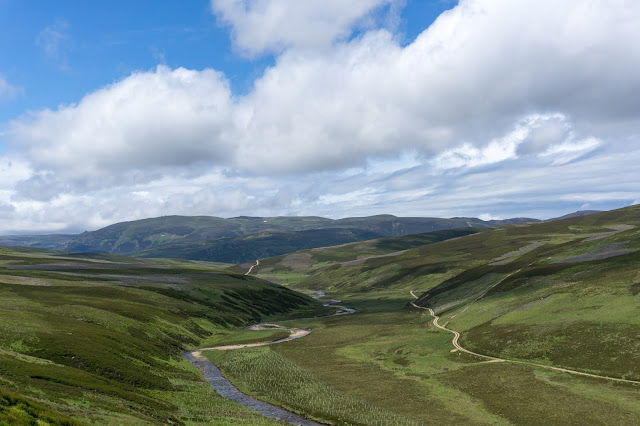 A last look up Glen Gairn to Ben Avon, and another view full of space.  The plantings alongside the river are mixed native broadleaf and pine, planted has been aided by a charity with the intention of improving the habitat for freshwater molluscs.  Other work has been done on the river itself - large pine tree root-plates and stumps have been strategically placed in the water and backed by boulders with the intention of slowing the flow and creating gravelly pools for Salmon and Trout to spawn.  Years of milder winters have led to changes in the flow of the Gairn, reducing the volume quite significantly. 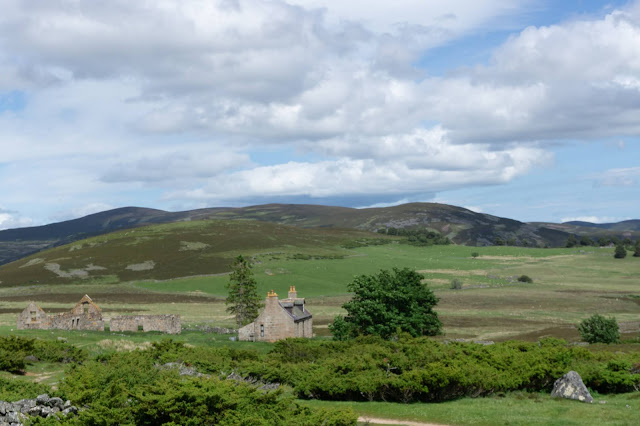 Our walk back to the starting point was on one of the smoothest estate tracks imaginable, which was welcome as it was now 26 degrees Celsius and pretty warm for walking.  The lower ground is dotted with former shielings and newer, but abandoned, farms, it must once have been quite well populated here.

Our route was 16 kilometres during which we saw just a couple of estate workers and a gamekeeper in his vehicle - a grand walk under blue skies and appropriately distanced from other folk!
Posted by Ian Johnston at 21:03 No comments: