I've been looking through some photographs recently and noticed how many I've taken of castles. Scotland is studded with fortifications, from Iron Age hillforts and Brochs right up to Victorian castles.


The west coast is particularly rich in fortifications of all types, most for defence against sea raiders, but some built to exert control over the vital sea routes which link the islands and reach deep inland via sea lochs. This is the rather magnificently sited Castle Stalker. It's in the entrance to a shallow loch (Loch Laich) which is an arm of Loch Linnhe in Appin. Although the water dries out around the rocky island the castle is built on at low tide, it would still have been a very effective defence. It seems to me to be a statement of power. Built by the MacDougalls of Lorn, probably replacing a smaller fortification, in the 13th century, it was designed to stamp the authority of this colourful clan of sea raiders on an arterial route. 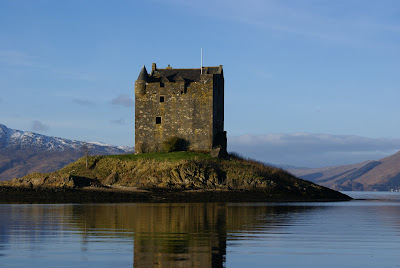 The story of Clan MacDougall and their struggles with the Stewarts is fascinating; a roller coaster ride of triumph, disaster, bloodshed and battles. The castle is a fitting monument to those turbulent times. 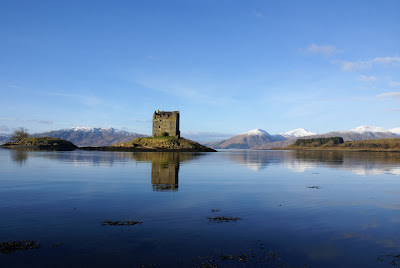 In this wider view, another castle can just be made out. Castle Shuna is in front of the tree plantation on Shuna Island. Built by the Stewarts of Appin some 200 years later than Castle Stalker, it's now a ruin. It seems to have been more a fortified house than a castle.

The views from both these castles are fabulous; these pictures were taken in December 2008 when I paddled around Shuna Island and down to Lismore. The mountains across Loch Linnhe are Fuar Bheinn and Creach Bheinn in the Kingairloch area of Morven.
Posted by Ian Johnston at 19:37 1 comment: 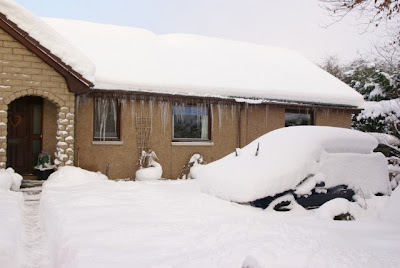 The recent winter weather has continued. It's been even colder; reaching minus 20 Celcius on one night, and whenever the teperature has warmed to around freezing there has been more snow; which has in turn frozen. The stuff on the ground is very hard. 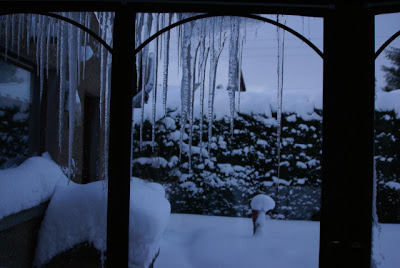 There's an impressive growth of icicles on all the houses. In these conditions, simple chores can be a bit of a struggle. Credit to Aberdeenshire Council, who are keeping all the main routes clear so far.
Posted by Ian Johnston at 20:19 No comments: Back in September, I posted about the Rowan trees in our garden having a huge berry crop. It certainly looks as if the tradition that a good Rowan year heralds a hard winter to come is being borne out. Along with consistently heavy snowfall there's been some really cold temperatures- typically minus 13 Celcius overnight. 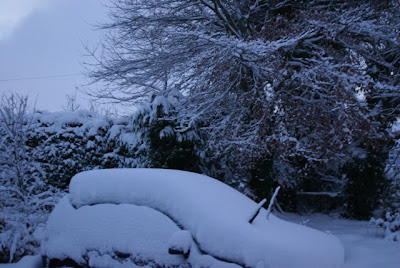 There's a car under there somewhere! 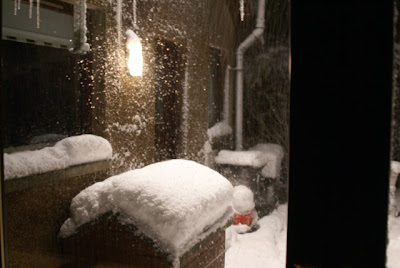 It looks pretty, but after a while things become difficult. These pictures were sent by my wife, who is having to cope with these conditions whilst I'm away at work. It can't be much fun; and it's still snowing heavily...
Posted by Ian Johnston at 20:31 2 comments: 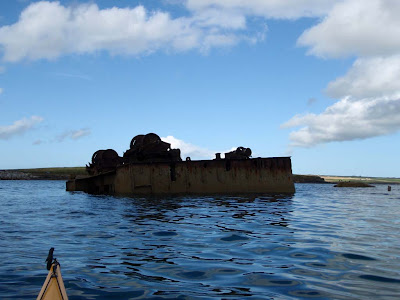 We did manage a couple of paddles during our week in Orkney. We enjoyed an unusual paddle around Lamb Holm and Glimps Holm, which took us up the line of Churchill Barrier Number 2 linking Lamb Holm with Mainland. It was a slightly strange experience paddling amongst the remains of the blockships which were sunk in this channel before the Barriers were built to deter a repeat of the incident in which Kapt Lt Gunter Prien entered Scapa Flow and torpedoed the battleship HMS Royal Oak at anchor in 1939. She went down with the loss of over 800 lives. The feat of seamanship by Prien in entering, pressing home his attack and then evading the hunting Royal Navy vessels shook the Admiralty, but drew private admiration despite the terrible loss of life. 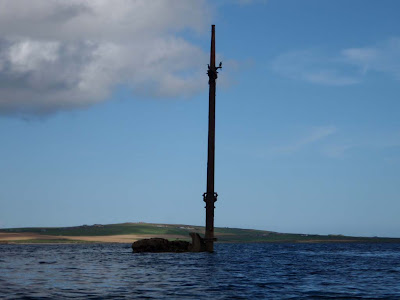 Prior to the building of the Barriers, additional blockships were sunk in the channels between the islands surrounding Scapa Flow. It's quite a unique experience to paddle among the sunken remains; you can easily identify boilers, deck machinery and superstructure in the clear water.

The Churchill Barriers were built largely by Italian POW's who were accommodated on Lamb Holm. The Geneva Convention forbids the using of POW's for work on warlike projects, so roads were placed on top of the Barriers. These links are now a vital part of the Orkney infrastucture. The Italian men built a chapel nearby. This moving abd poignant building housed in a former Nissen Hut was decorated by the men using scraps and papoer mache; the images and icons within it evoking images of Italy. Today it's a popular stop for tourist buses. We were fortunate to see it at a quiet time, in the company - somewhat fittingly- of a German couple and two young Italians.
Posted by Ian Johnston at 21:06 No comments: