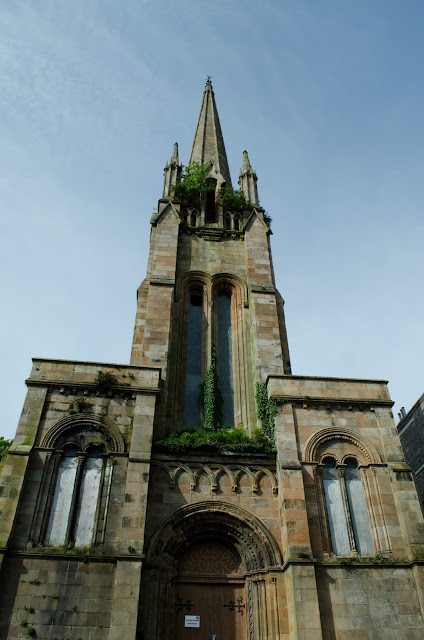 The West Church in the town of Rothesay on the island of Bute was built in 1846-7 and remained in use until 1978.  It is considered a fine example of a three by six bay Victorian Romanesque kirk; since 1978 there have been several applications to demolish the building but all have so far been refused.

There's no doubt that the fabric of the kirk is in decline - it couldn't yet be described as totally derelict but perhaps well on the way.  While the arguments about the future of the building rumble on, nature has found a remarkable use for the sunny south facing walls........ 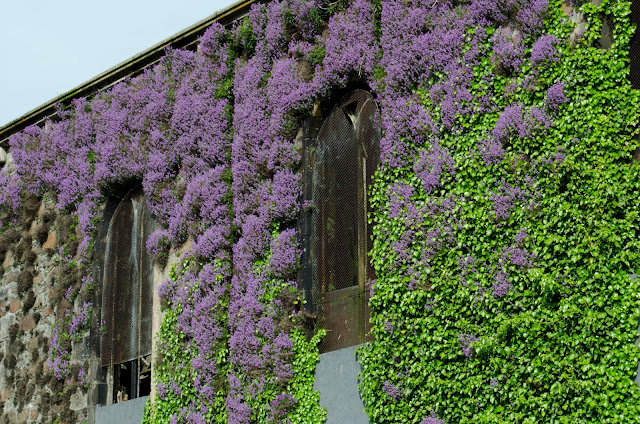 ......which have become a vertical garden of ivy and flowering plants. 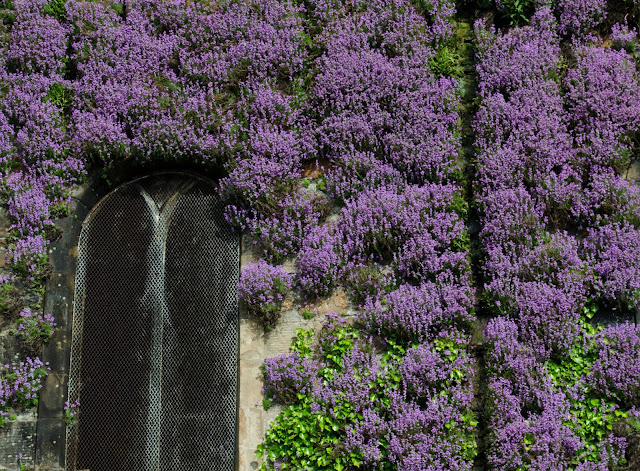 In early summer the walls surrounding the empty window apertures bloom into a carpet of brilliant purple flowers.  It's not so easy to get close enough to ell which species, but the effect is undeniably beautiful, transforming a run-down building on the edge of a car park into something more attractive entirely.

Ironically, the builders use of sandstone rubble to incorporate into some of the detail of the building has probably created the conditions in which this vertical garden has flourished. 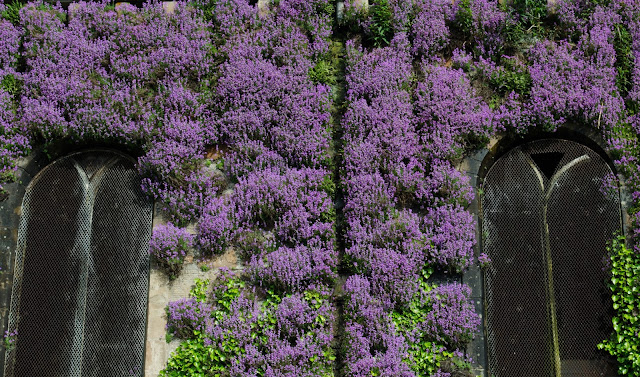 There's a sort of symbolism in the decline of a church building giving rise to such an outpouring of natural energy - but aside from that, on its own merit this is a lovely and colourful display.
Posted by Ian Johnston at 20:15 7 comments:

The wrinkles of Ben Rinnes 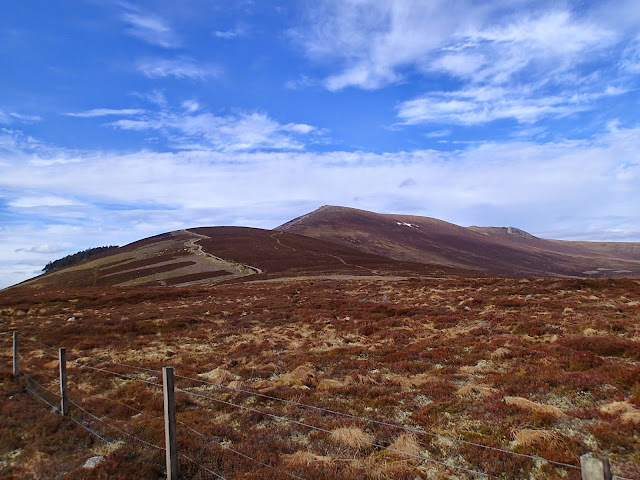 Ben Rinnes is one of those really popular hills which inspire affection in folk.  It has all the right attributes in having a prominent character, being visible from a wide area and being relatively easy to climb. It's also a very well-trodden hill; the path to the summit is very noticeable from a distance.

A brief visit home from working away with a forecast of good weather in the morning followed by gales and squally showers in the afternoon had me looking at where I could go to get a good hillwalk before the poor weather arrived - Ben Rinnes fitted the bill perfectly.

I started out from the minor road which leaves the B9009 Glen Rinnes road - there's parking for several cars by a gate giving access to the start of the track which climbs Round Hill. 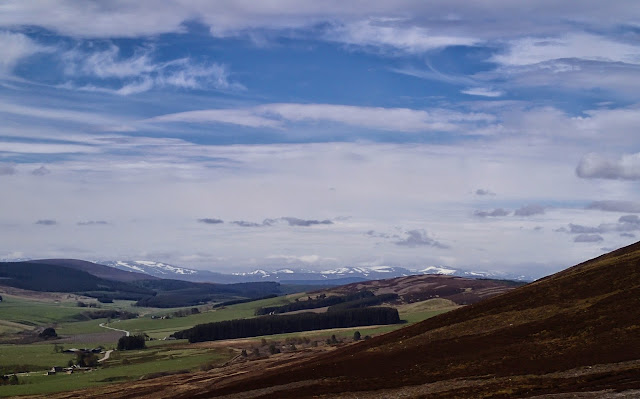 The fact that Ben Rinnes is visible from such a wide area means of course that it has a correspondingly wide view.  Almost from the start of the walk there is a great view down the length of broad Glen Rinnes to the distant Cairngorms, still bearing substantial snow patches in the first half of May. 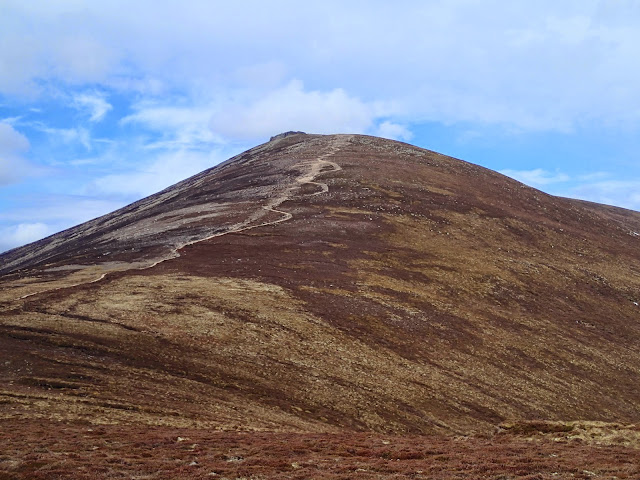 As the appropriately domed top of Round Hill is reached the view ahead is dominated by the summit cone of Ben Rinnes.  The broad scar of the old path stretches straight up the hill, with the less direct line of a path constructed by the Friends of Ben Rinnes.  In time the scar of the older path will fade and the less obtrusive and robust new path will be far less of a scar. 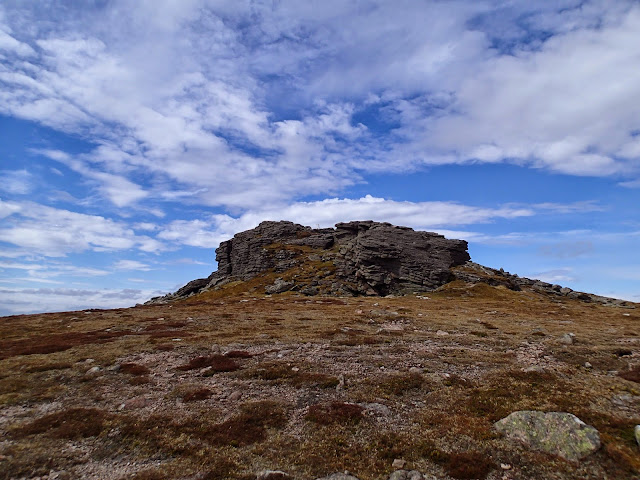 It takes little more than an hour's steady climbing to reach the granite tor which marks the summit of the hill, and bears the resounding name of "Scurran of Lochterlandoch" (Scurran is an anglicisation of the Gaelic Sgurran - little pointed peak).  At 840 metres/2756 feet Ben Rinnes is one of Scotland's 220 Corbetts, a classification of lower height than the more famous Munros, but which give nothing away in quality to their higher brethren.

The vast majority of folk seem to descend Ben Rinnes by the route of ascent.  I prefer to make some kind of traverse or circular route whenever possible and I felt that walking north west from the summit across the broad ridge to another tor - Scurran of Well (which can be seen on the high ground to the far right in the first image of this post) - would give the possibility of returning on a lower level track below the northern slopes of the hill.

Getting off the main track was rewarded almost straight away with a nice close view of a hen Ptarmigan (Lagopus mutus), and then, thrillingly, two Dotterel (Charadrius morinellus) another avian mountain specialist, but much less common than the Ptarmigan with an estimated population in Scotland of only 500-750 breeding pairs and a real treat to see here. 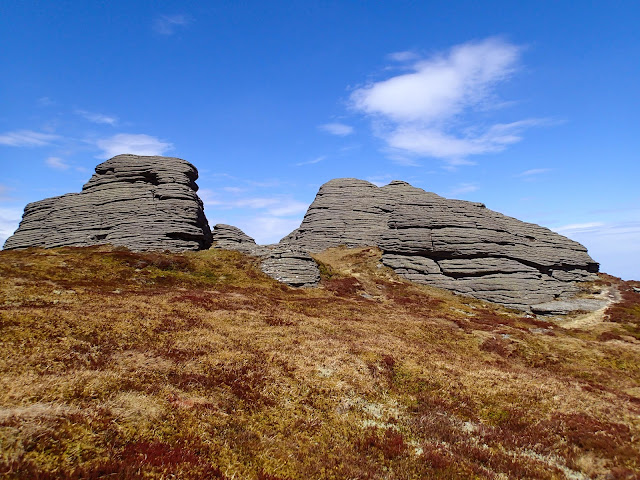 Crossing a broad and peaty bealach (saddle or col) brought me to the Scurran of Well.  I've seen this place many times from below on the road and from the summit of Ben Rinnes on a previous winter ascent, but hadn't appreciated that what appears from a distance to be a single rock formation is in fact a whole group of contorted granite outcrops. 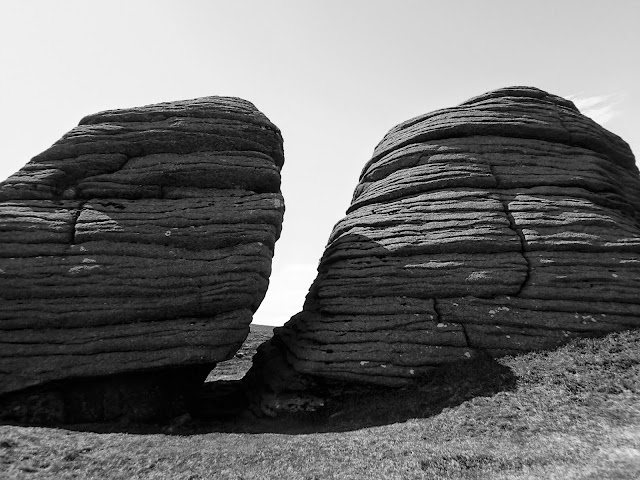 The distinctive appearance of granite tors (there are other great examples on Beinn a'Bhuird, Ben Avon and Bein a'Mheadoin in the Cairngorms to name but a few) has been a subject of debate among geologists and geographers...... 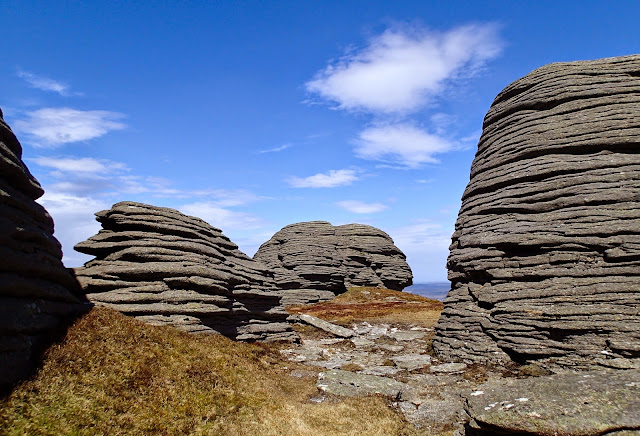 ...but the general consensus is this: granite is a hard, crystalline igneous rock formed of three main constituent minerals; quartz, feldspar and mica in varying proportion.  In areas where tors are found the granite has been intruded into the surrounding rocks as a batholith.  Because the batholith formed deep in the earth's crust it cooled very slowly to produce a rock with large crystals.  Over geological time the rock above was eroded away and the reduction in pressure caused the granite to crack, creating joints and bedding planes. 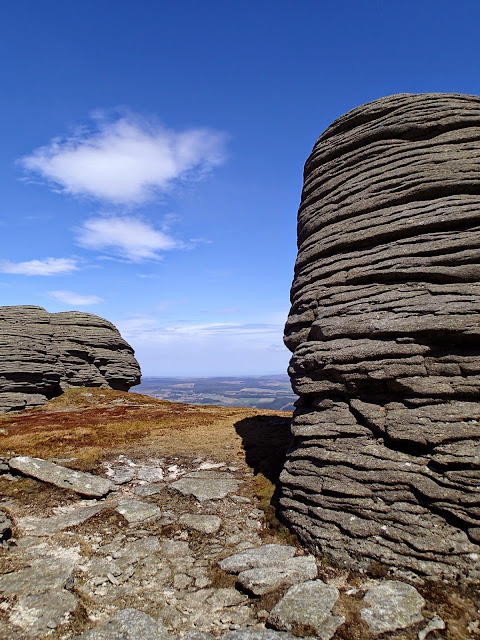 .....a granite tor is the result, although of course the weathering process continues to shape the rock.  I really like granite tors; they're a striking and unusual landform as well as being surprisingly difficult to climb!  The view between this pair northwards extends across Moray and Speyside all the way to the Moray Firth coast.

My route of descent went steeply down to get below Scurran of Well and then across rough ground to pick up the track on the north side of Ben Rinnes.  This made for a nice circular route, though the track, even in a dry spell of weather, was very wet.

It's well worth the diversion over to these wrinkles on Ben Rinnes, even if intending to descend back down the main path, they are great features to explore.