Treecreeper on a tree

I've been lucky enough to have enjoyed some really great wildlife encounters in Scotland, some of which have featured here on the blog.  Multiple White Tailed Eagles, incredible dolphin encounters and huge numbers of Grey Seals  all fall into the "spectacular" category.  But, fascinating wildlife encounters are also to be had on a much smaller scale.

On a regular walk near the village of Monymusk we'd noticed that a number of small depressions in the bark of several Sequoia or Wellingtonia trees Sequoiadendron giganteum) at about two to three metres height.  Having recently read Sir John Lister Kaye's "Gods of the Morning" I suspected that I knew what had made these depressions, but to be sure we had to return after dark. 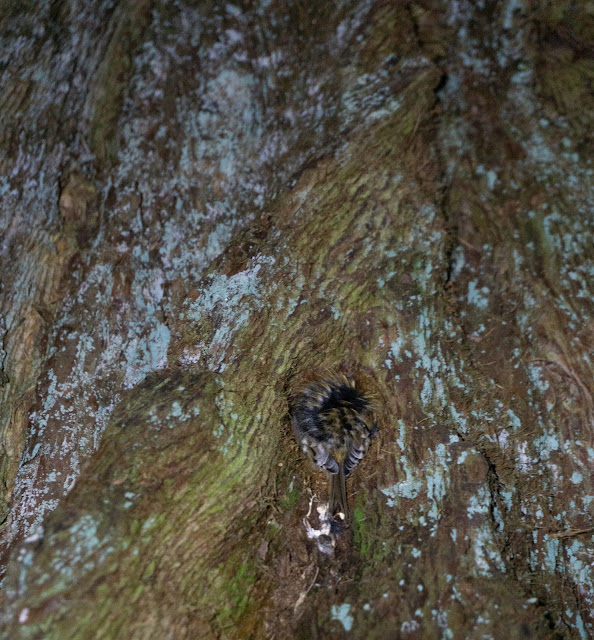 Sure enough, tucked tight in against the bark of one of the trees was a tiny ball of fluff and feathers - a roosting Treecreeper (Certhia familiaris).  Not just one either; there were two birds roosting on the first tree we came to and two more on a tree just ten metres away.  These tiny, unobtrusive birds gave us a really intimate glance into their lives; to avoid startling them we used a head torch on low power rather than the camera flash to illuminate them, none of them seemed to notice us at all. 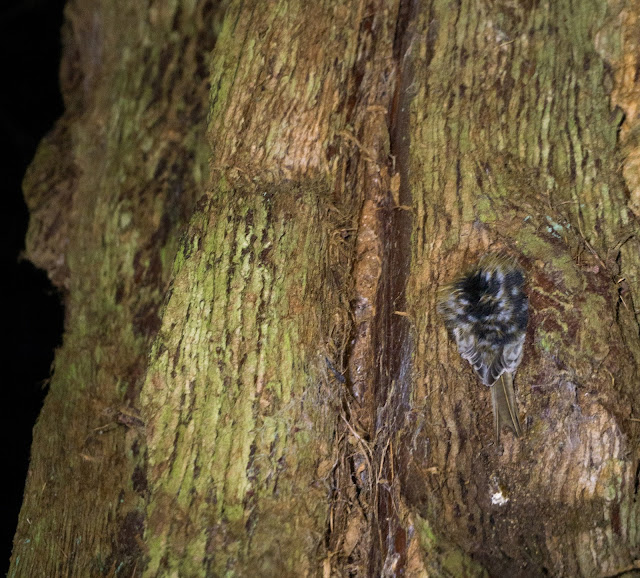 Wellingtonia bark is very soft and fibrous and Treecreepers have discovered that they can easily excavate roosting sites which are roughly egg shape and size into the trees.  The choice of height appears to be fairly consistent, and also convenient for observing them.  Thermal images of the trunks of these trees shows them to be significantly warmer than the surrounding air and woodlands after dark and the birds take advantage.

Wellingtonia trees were first planted in Britain in 1853, so they're a fairly new opportunity in evolutionary terms.  What fascinates me is - how did Treecreepers first discover they could excavate roost sites in the trees - they don't seem to use other species of tree in the same way, opting for natural fissures and loose bark.  Even more fascinating is how this knowledge propagated through generations of Treecreepers - the birds live for approximately two years, so if Wellingtonia are roughly 150 years old then that's roughly 75 Treecreeper generations.  Given that these endearing little birds seldom move more than 500 metres from where they hatched, and the distance between individual Wellingtonia trees, it's unlikely that the knowledge of how to use them spread so rapidly from individual to individual and yet use of Wellingtonia for roosting is widespread in the UK.  Maybe it's an inbuilt trait in Treecreepers, or learned in some way - I'd love to know more!
Posted by Ian Johnston at 17:49 1 comment: