A Leisurely Day on Loch Linnhe 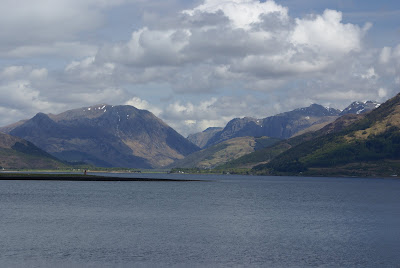 On our final day in Ardgour, we met up with Simon and Liz and their friend Kate - who is also taking her first steps in sea kayaking. Loch Linnhe was chosen for a short paddle in relative shelter; the views across the loch to the Glencoe hills and Beinn a'Bheithir were a bonus. 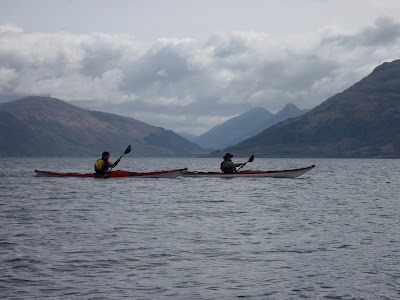 We set off down the loch at a leisurely pace. It was good to just be experiencing the simple pleasure of moving along the shoreline with no pre-determined goal.

The ebb was revealing skerries where we practised turns and paddle strokes. No formal instruction here; rather "try this and see what happens to the boat". Watching Kate and Dave relaxed and increasing in confidence added a lot to the day. As we were moving slowly, Common Seals came to investigate us at close quarters - another experience which we sometimes take for granted, but a novelty for Dave and Kate. 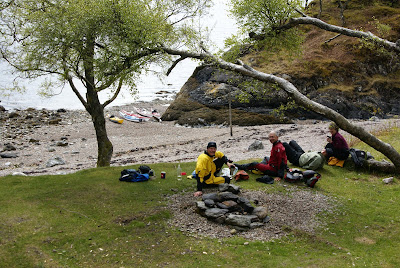 We stopped for lunch at a nicely situated beach inbetween rain showers. Out came various flasks and stoves for brews as well as a range of fruit, cakes and other treats. The advantage of a kayak for storage was clear! 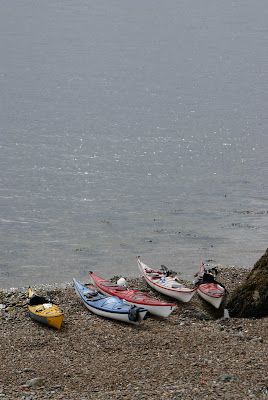 With five different kayak models from four manufacturers in our small flotilla, there was a chance to try other boats. The P & H Cetus proved particularly popular with everyone who paddled it. Simon and Liz have done a big trip in Ceti, and really rate them as expedition boats. Dave was very enthusiastic about it's stability and comfort and I really enjoyed a short paddle in it. Very manoeuvrable for an expedition boat, and I felt that it edged very well.

All too soon we returned to the cars and started packing up; our ways home were fairly widely separated. It had been a really pleasant paddle, made all the better by the obvious enjoyment of our two new sea-kayakers.

The last paddle for me for quite a while as I'm now at work for several months, and this was a great way to round off.
Posted by Ian Johnston at 19:21 No comments:

A Contrasting Day on Beinn Resipol 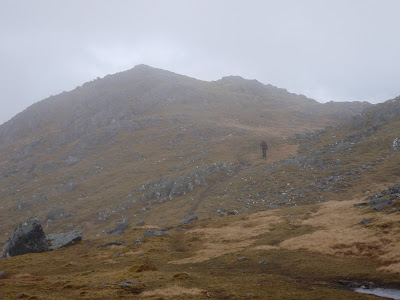 The day after our paddle on Loch Ailort, we climbed Beinn Resipol straight from the campsite. As we'd taken a car down to Strontian the previous evening, we were able to traverse the hill from Resipol to Strontian. If traversing, we'd recommend this way around rather than Strontian to Resipol.

Lower down our route followed a gorge through woods of Oak and Birch before breaking out onto the open hill. The going is a bit boggy, but the hill is full of interest. The top part is a rocky tower with scrambling opportunities. We chose a route and followed entertaining but never difficult scrambling right to the summit (845 metres). This picture was taken on the broad east ridge as we headed down. Once again a Corbett proved the equal of most Munros in quality.

The weather high on the hill was a succession of wintry showers, whereas low down we'd been in warm sunny weather. A complete contrast to sunbathing on a white sand beach the previous day - the variety of Scotland! 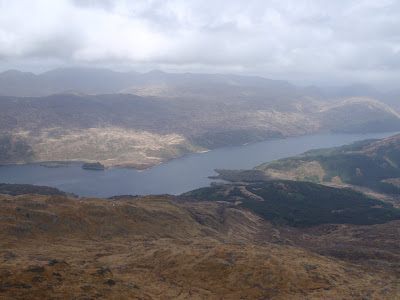 Between the showers the views were a kaleidoscope of colour and form.

To the west one has the widescreen view out into the Minch, to the north the length of Loch Shiel leads the eye to the Glenfinnan hills whilst to the south Loch Sunart winds below the hill. In a way, the coming and going of the visibility added to the views, as each time a view was revealed it was different.

It'd been far too long since Dave and I had been on the hill together, but what a good day and a good hill.
Posted by Ian Johnston at 20:38 No comments: 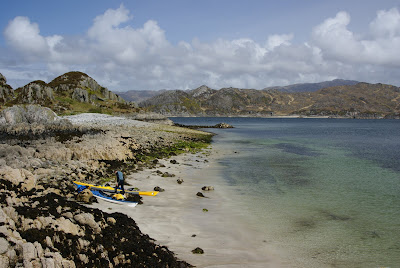 I've known my friend Dave for nearly 20 years. We've shared some great times on and off the hill in good weather and bad. Our hill and climbing days together have forged the deep and intuitive partnership that mountains do. However, Dave was a bit reticent about sea kayaking. He'd had a quick blast in a sea kayak about a year ago, but I finally persuaded him to venture out on a full day paddle.

We chose Loch Ailort on a bright Spring day. I really hoped we'd have a good day, and certainly our first destination, Eilean nan Gobhar was a good start. We landed and explored the vitrified hill forts on the high point of the island. 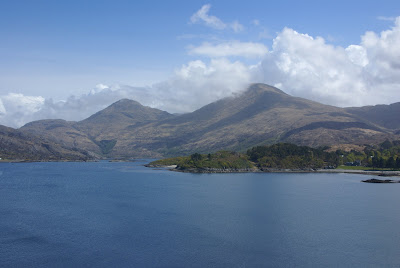 The view back along the loch to Roshven was good too. 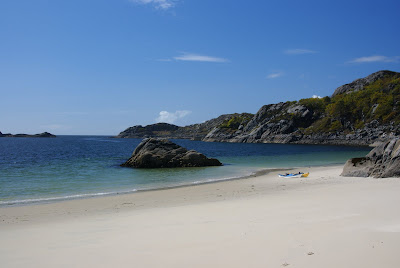 The beach we landed on for lunch was little short of superb. 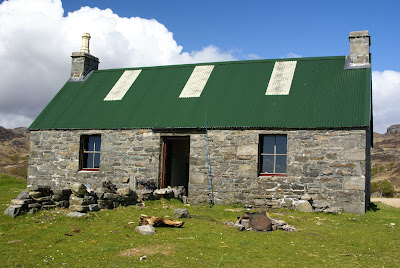 Coming back along the loch, we passed this bothy, which had several folk in residence for the weekend. 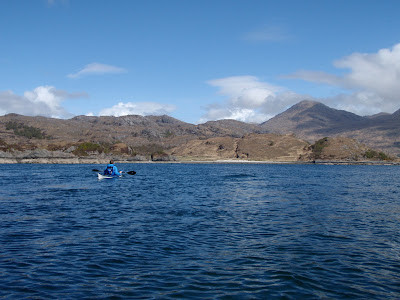 Not a bad day for a first trip! 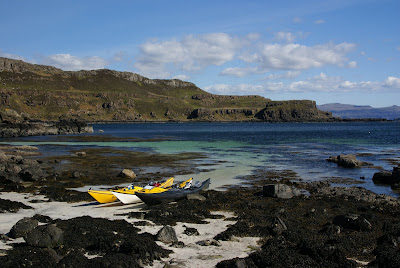 The period of northerly airflow in early May brought cool but very clear conditions. The colours seemed to be especially sharp and lovely. This is a bay on the south coast of Gometra. 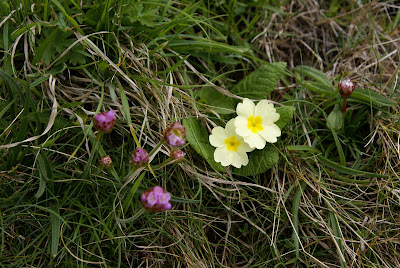 Primroses were well into flower whilst Thrift (Armeria Maritima) was just beginning to bring a purple wash to the cliffs and rocks. 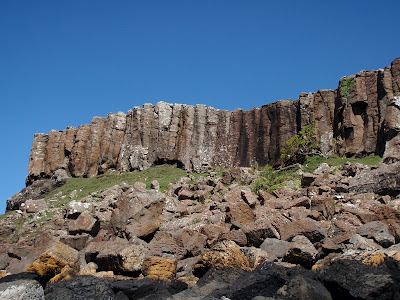 The contrast of sky, basaltic rocks and lichens seemed to fairly zing with colour. 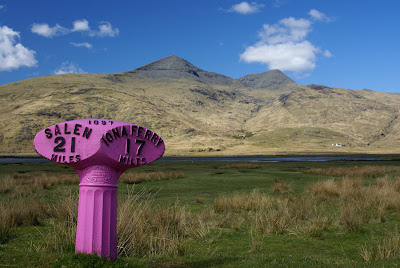 But perhaps not as brightly as this milepost in the foreground of the view of Ben More from Pennyghael! There's no Photoshop in use here; it really is carefully painted bright pink.....

Posted by Ian Johnston at 22:09 No comments: 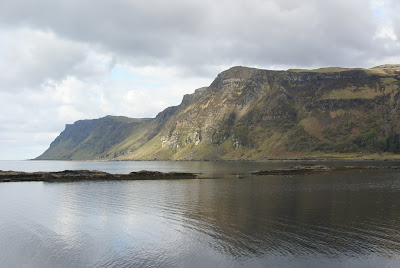 The following day I went to Carsaig on the south coast of Mull and paddled west along the cliffs towards the Carsaig Arches. In contrast to the previous day, all was calm here; sheltered from the northerly winds.

The road from Pennyghael to Carsaig is an adventure in itself, narrow and steep with few passing places. 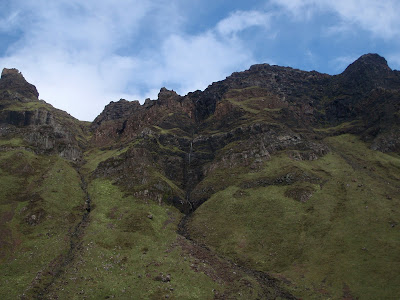 There's some spectacular cliff scenery along this route. The cliffs are generally about 250 metres high and have pinnacles and towers along the highest parts. There are also lots of feral goats, I saw at least four bands each consisting of 15-20 goats. 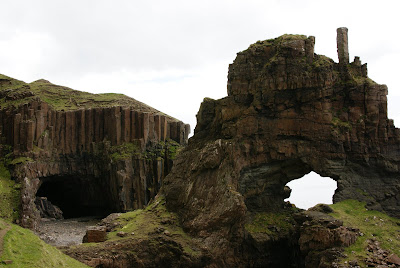 I soon arrived at the arches. It's possible to land at the base of the main arch, or in the east entrance to the large open cave, or a little further to the east. All these landings are easier if it's near high water (it wasn't!) and would be very difficult in anything but calm conditions with no swell.

But what fantastic rock architecture! It's very well worth the effort of landing to explore on foot. 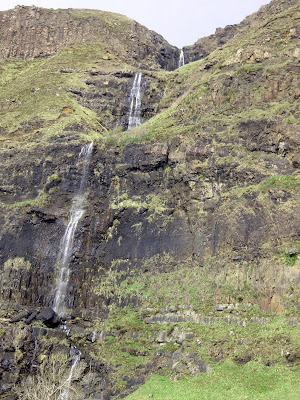 On the way back to Carsaig Bay, this triple waterfall is near the intriguingly named Nun's Pass - a break in the sheer rock of the upper cliffs below which is a cave where nuns from Iona are reputed to have hidden during the upheaval of the Reformation. 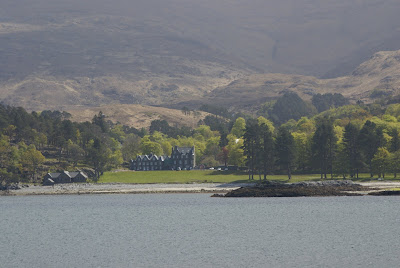 Returning to Carsaig bay, the sunlight was picking out Carsaig House and some lovely parkland trees.
This part of the Mull coast is exposed to the prevailing southwesterly weather, but today had provided shelter and warm sunlight when it remained windy elsewhere on the island. 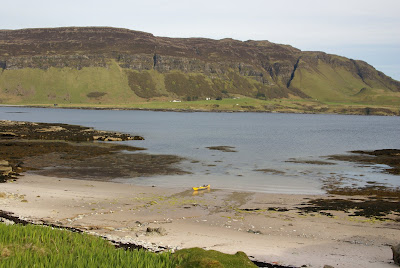 I passed a couple of likely camping spots on the south coast of Gometra, but decided to cross back to the south side of Loch na Keal as the wind was rising all the time. The crossing to Inchkenneth was initially exhilarating in a following wind and sea, but got difficult near Inchkenneth. After a couple of "moments", I pulled around into the shelter of the bay near Inchkenneth House and Church. 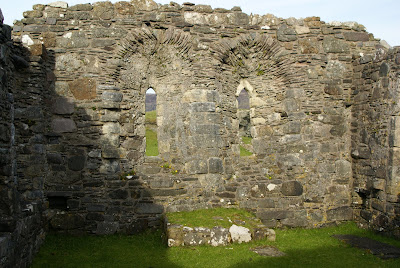 The 13th Century church is in the care of Historic Scotland. The building was very well constructed, but the real interest lies in and around the ruin. 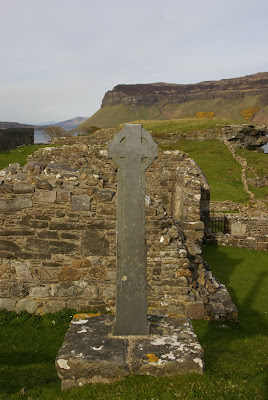 This Celtic cross is on the mound containing the graveyard. 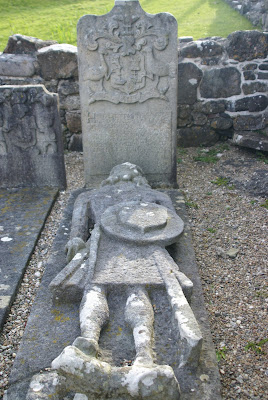 While this grave slab is witihin the church itself - and is believed to have been one of the MacLean chieftains of perhaps the 16th Century. 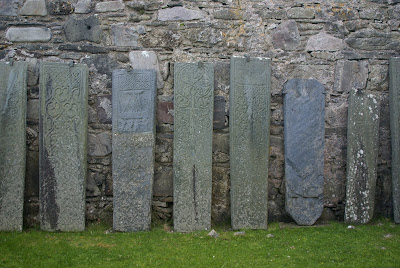 These wonderfully detailed Celtic graveslabs were, for me, the highlight. The detail and workmanship are superb. I tried to get some close-up photographs, but they didn't really show the detail. You'll just have to visit yourself!

Posted by Ian Johnston at 11:13 No comments: 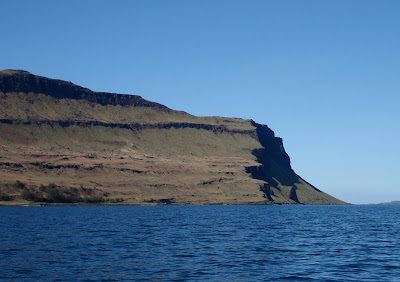 After an early start from home and two ferry crossings, I set out on an intended overnight trip from Loch na Keal on Mull to paddle around the islands of Eorsa, Ulva, Gometra and Inchkenneth. The morning's weather was superb. 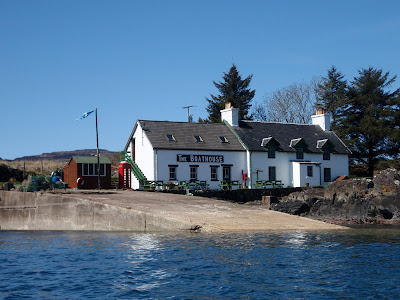 After stopping on Eorsa for a late breakfast, the next destination was Ulva Ferry. It's just a few hundred metres from Mull to Ulva, but a world away in many respects. This is the Boathouse tea-room. 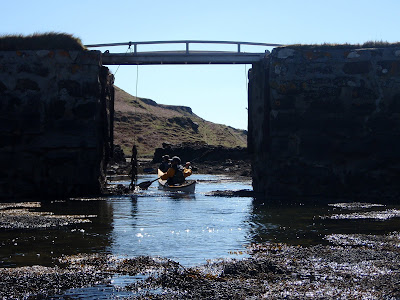 Paddling through the sound of Ulva got me into Loch Tuath. The wind was by now getting up, and quickly reached Force 4 from the north. It was a bit of a slog up to the gap between Ulva and Gometra, where there was a bit of shelter. Two other paddlers, Gemma and Stef from Wales, were also getting a breather here.

We all decided that going round the north end of Gometra would be hard work, and so teamed up to portage the boats through Am Bru, the gap between the islands. It's a narrow gap spanned by a bridge and even at high water neaps was dry for about 75 metres. This was a bit muddy, but preferable to exposed paddling in the still strengthening wind. 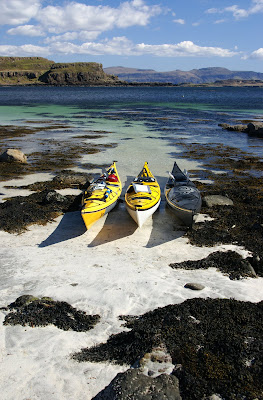 Together we explored the south coast of Gometra, including this beautiful bay where the colours of the sea and sky were simply stunning.
Posted by Ian Johnston at 17:48 3 comments: