A walk along the water at Glen Grant

A raw and grey end-of-November Sunday morning with a forecast of snow to come was no enticement to do planned outdoor jobs at home; instead we drove across to Speyside for a leisurely day out..... 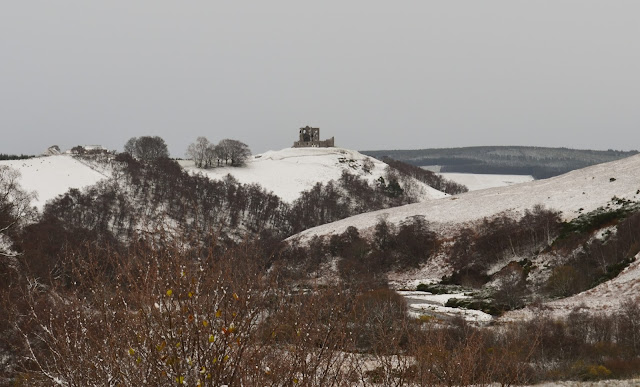 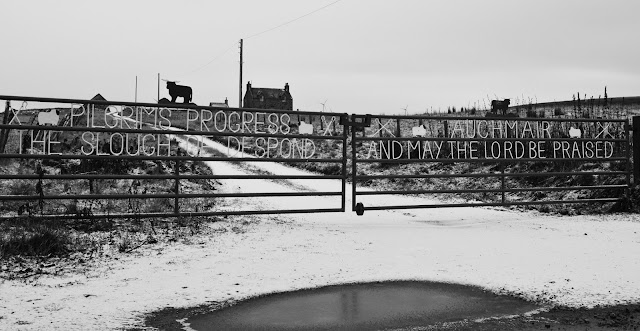 ...passing as we did the gates to Auchmair farm in the Cabrach with their reference to John Bunyan's 16th century book "The Pilgrim's Progress" plus wrought iron cattle, sheep and even shepherd's crooks.

The place we'd planned to visit was actually closed due to icy underfoot conditions, so we travelled a little further north along the Spey valley to Rothes, where we stopped on impulse at the Glen Grant Distillery Garden.  Here in the north of Scotland, late November might not seem to be the logical time to visit an ornamental garden, and the friendly staff at the visitor centre (which was just about to open for the day) made this point - but the view up into the garden area promised a pleasant stroll - and so it proved.  A very modest £5 per person is charged for access to the garden, the distillery tour and a tasting.  We didn't really intend to take the distillery tour, rather just to visit the garden and have coffee in the Italian coffee shop situated in one of the converted buildings. 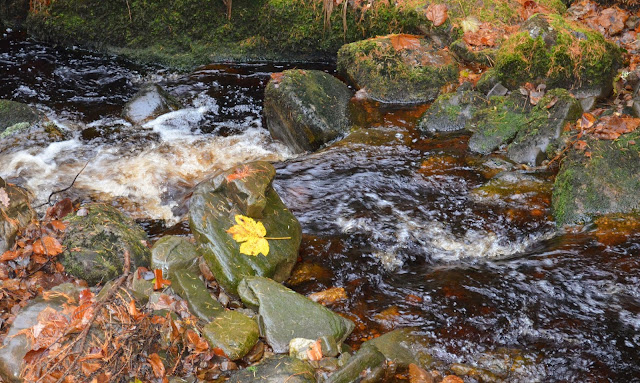 The heart of all good whisky is pure water, and Glen Grant like almost all distilleries is built around a stream tumbling from the hills above.

The garden was originally designed by James Grant, one of the founders of the distillery, and has been restored beautifully in recent years.  The burn (stream) forms a thread down through themed areas, and though the summer flowers were long gone there was a surprising amount of colour to be found. 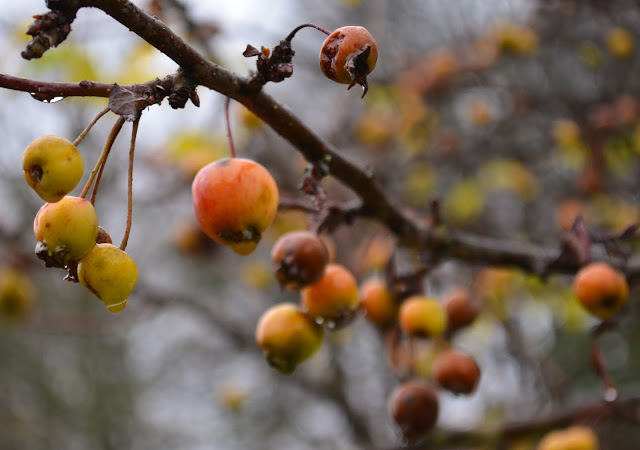 Golden-orange berries on this tree contrasted nicely with the lichens on the orchard trees surrounding it. 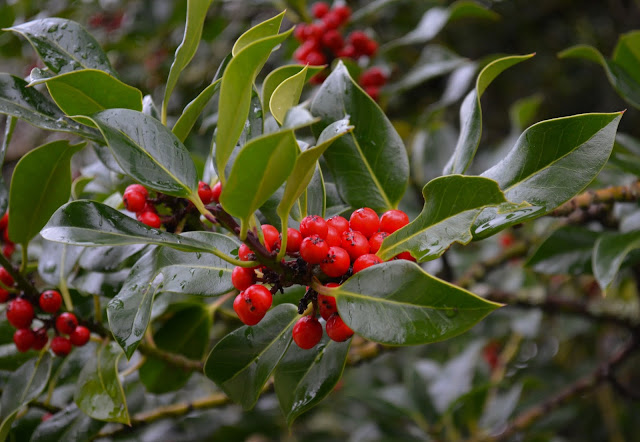 Nearby, a couple of trees we thought might be Skimmia japonica bore large bunches of intensely red berries which lit up the muted colours of a grey day. 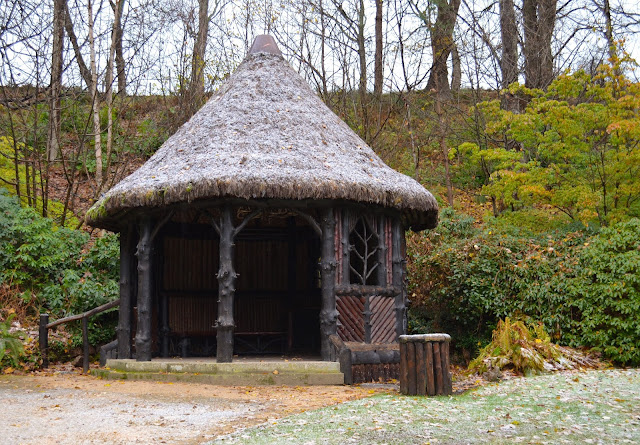 Higher up the garden is a "dram pavilion" where one of Glen Grant's owners - James "The Major" Grant - indulged his guests with a dram from his private cask. 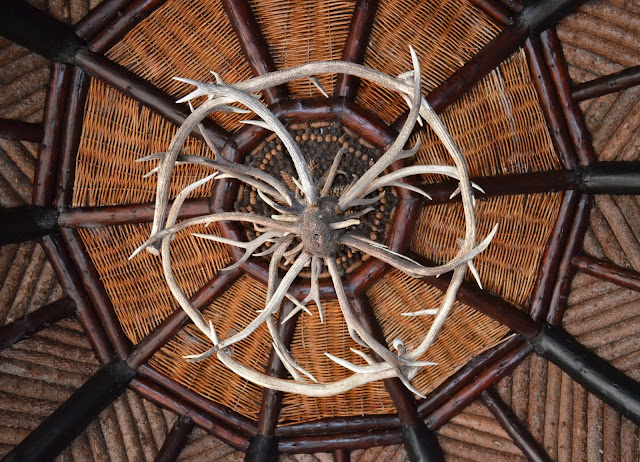 Under the conical thatched roof of the rustic pavilion is a candelabra made of stag's antlers - all very grand and Victorian! 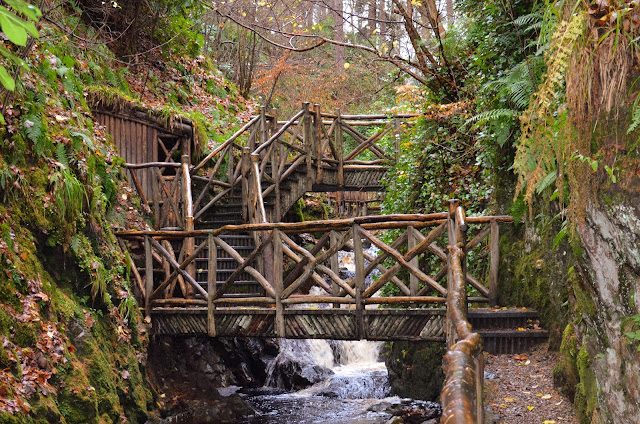 Above the main garden, a series of timber bridges and stairways leads up a narrow gorge, the tiny hut on the left contains another of "The Major's" dram stowages in a locked safe, clearly a man who didn't expect his guests to walk too far without a dram! 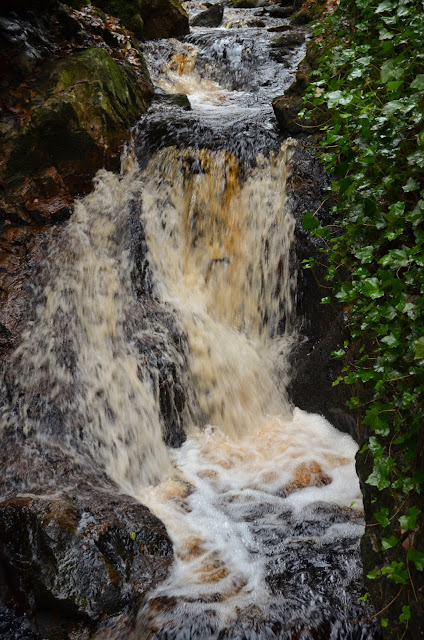 Above the hut is a tumbling waterfall - it's a lovely spot to pause for a while; and we weren't the only ones to think so.... 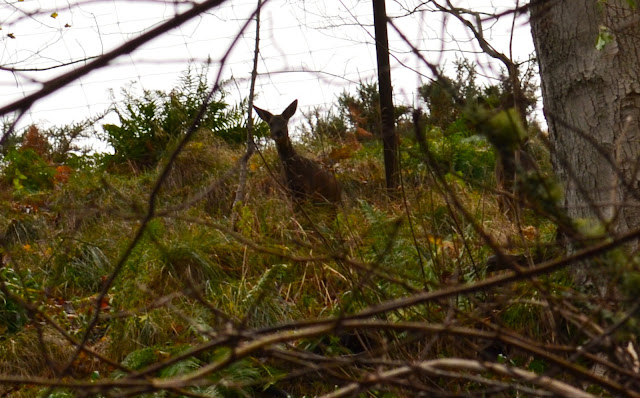 ...above the burn two Roe deer watched us intently.

Despite the gentle exercise around the garden the November chill was beginning to make itself felt. We walked back down through the garden, following the burn past where the water is drawn to supply the distillery and into the warmth of the coffee shop.

We were asked would we like to take the tour, a warm and genuine offer even though we were the only customers at this early hour on a Sunday in November.  We thought that actually it would be good to follow the water from the burn right along its journey to becoming "Uisge Bheatha" (the water of life).