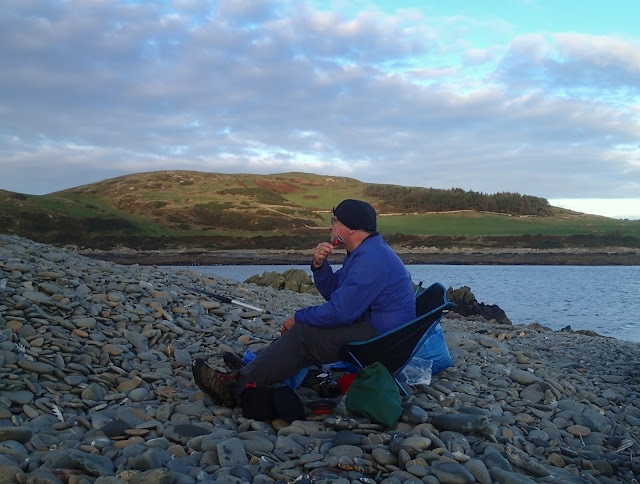 We were up and about before sunrise on Little Ross Island.  Douglas kept up the standard in our little group by shaving before breakfast.....  Mike and I elected to remain as passable "Billy Goats Gruff", though when Douglas suggested taking luncheon in Kirkcubright we did wonder just how posh the place he had in mind might be!

We'd only briefly visited the lighthouse the previous evening, and as we're all very much pharophiles, we walked back up the hill....... 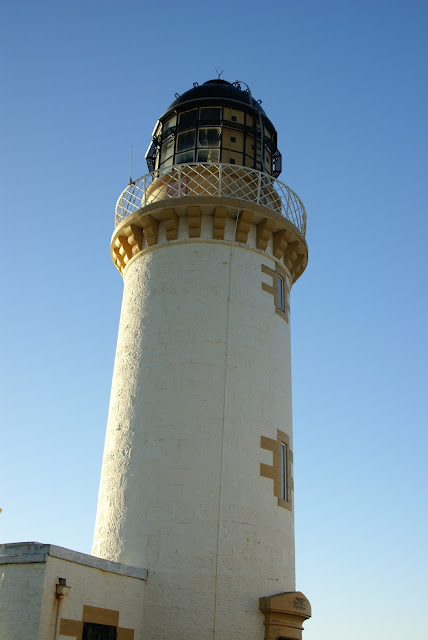 ...to explore the lighthouse a little more.  Built at the mouth of Kirkcudbright Bay to close the gap between the lights at Mull of Galloway and Southerness, Little Ross Island light was lit on 1st January 1843, and flashes white once every five seconds.

The mechanism here was at the cutting edge of the technology of the time as it was the first light of catadioptric type, with metallic mirrors above and below the lenses.  The huge lens was removed after the light was automated and is now on display in Kirkcubright museum. 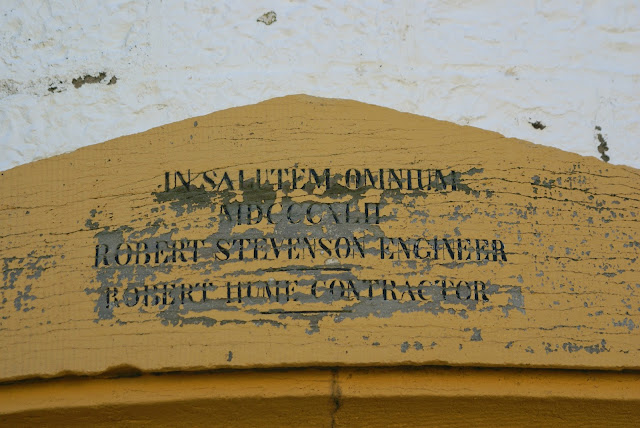 An inscription above the door identifies that the building contractor was Robert Hume and the Engineer (the title used by the designer and overseer of the lights of the Northern Lightboard) was Robert Stevenson.  Founder of the formidable dynasty of lighthouse builders (and grandfather of the author Robert Louis Stevenson), Robert had made his name with the building of the Bell Rock light off the coast of Arbroath, an astounding technical achievement.

His designs would set the standard for those who followed. Architecture was symmetric, geometric and precise, almost austere.  It reflected the character of the man, but also laid out in stone Robert's vision for the Northern Lighthouse Service, everything should be ordered and "shipshape" to a high degree; nothing less would be tolerated.  The Latin inscription at the door is the NLB's motto "In Salutem Omnium" (For the Safety of All) and Robert believed with all his being that the NLB was a vocation rather than a job.  The story of the "Lighthouse Stevensons" and some of their most notable lighthouses is told in an excellent book of that title by Bella Bathurst, well worth a read.

Indiscipline and slackness were rare among lighthouse keepers, they were a breed of steady and patient men of routine and habit. I'm fortunate to have known a man who worked at several of the sea-lights and he was the archetypal keeper, a man to respect.  Of course, there were occasional incidents and where these did occur they tended to be remarkable.  In August 1960 there were two keepers at Little Ross instead of the usual three as the light was about to be automated.  One of the keepers, Hugh Clark, was found murdered, with the only suspect being the assistant keeper Robert Dickson.  Dickson fled to England but was arrested and found guilty of the murder and sentenced to hang, this was later commuted to life imprisonment.  To this day there are sea kayakers who won't camp on Little Ross, believing it to be haunted, but we felt that the ghost of a man who spent his working life assuring the safety of mariners would harbour no ill to us. 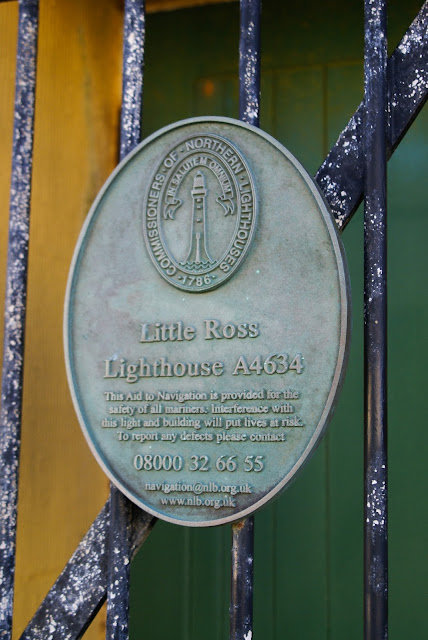 Nowadays the light tower is locked and barred, with the familiar bronze plaque of the NLB affixed to the gate. 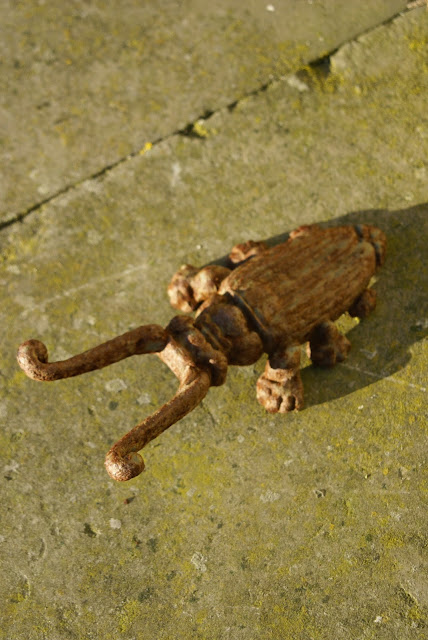 The keeper's cottages are now in private ownership and the new owners have added some nice touches such as this boot-remover in the shape of a beetle...... 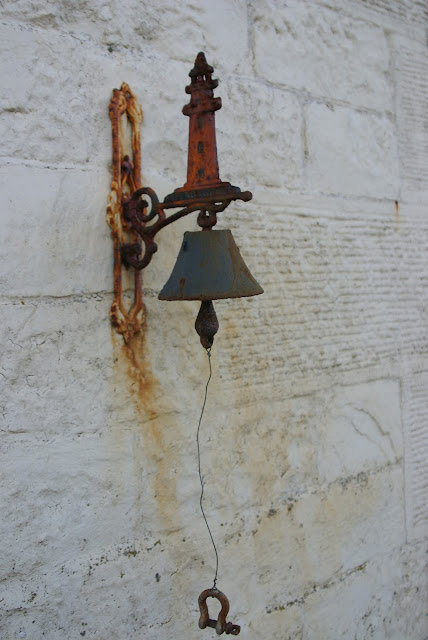 ...and a suitably lighthouse-themed doorbell. 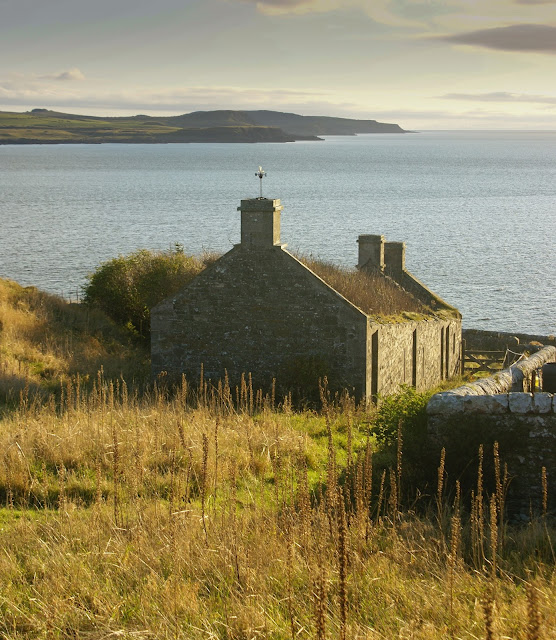 On our way back down to the boats we explored the surroundings of the lighthouse.  A row of cottages built on quite a slope lie just outside the walled garden which would have provided the keepers with fruit and vegetables. 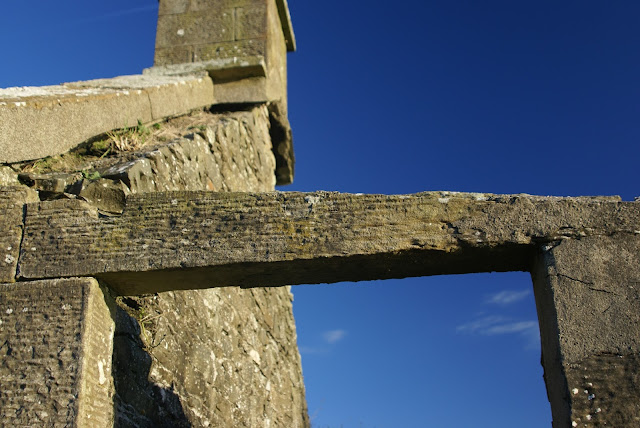 The angle at which this reclining row is built can be seen in the door lintels. 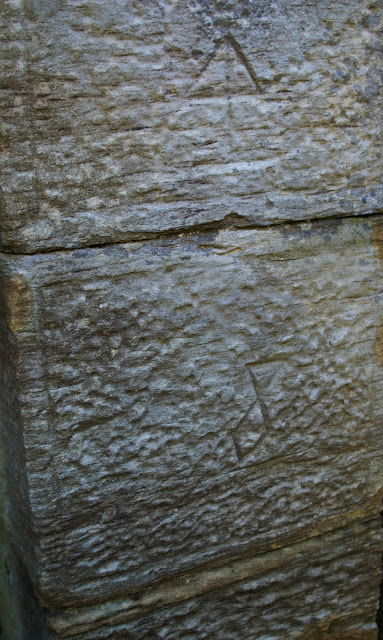 Either side of the fireplace in one cottage which appears to have been a smithy there are symbols inscribed into the worked stone blocks.  We were at a loss as to what they might represent, but our friend Duncan has identified them as "mason's marks", the signature in stone of the stonemason and a tradition stretching back over a thousand years. 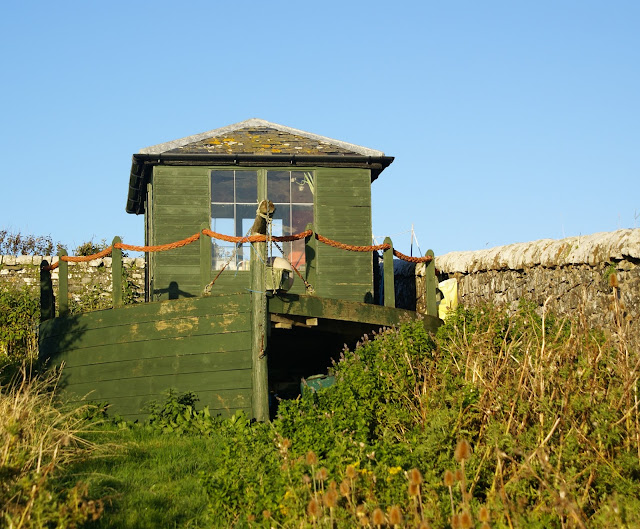 Within the walled garden the new owners of Little Ross have constructed a ship-shaped shed, although "shed" doesn't really do it justice.  A comfortable summerhouse on the deck of a boat heading for who knows where, it must be a great place to while away an afternoon. 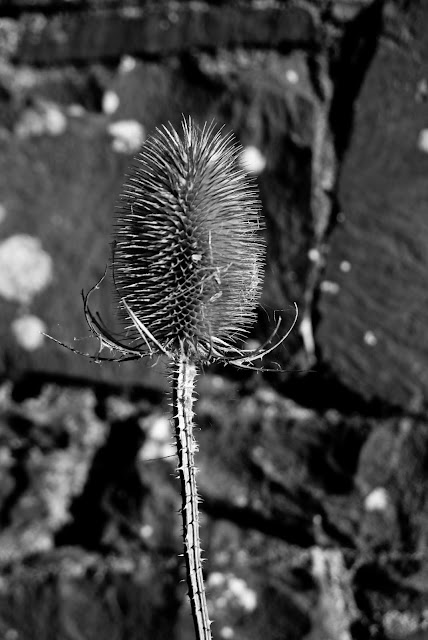 The garden itself is still tended; some vegetables and flowers are being cultivated, alongside rows of teasels. 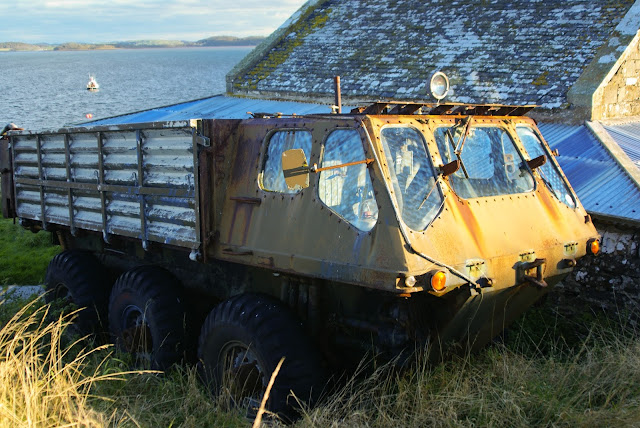 Back at the beach, we paused to inspect the island's only vehicle, an Alvis FV620 Stalwart.  Dating from the late 1960's the Stalwart was an amphibious military transport vehicle which saw service with the British Army and with oil exploration companies - I remember having a "Matchbox" model of this vehicle as a small boy....

With six-wheel drive and an amphibious drive system which could propel it at 6 knots, the Stalwart was designed as a go-anywhere transport.  It was, unfortunately very complex and required huge maintenance effort.  The amphibious drive was usually removed unless it was absolutely required and the six-wheel paired drive system was very prone to transmission wind-up if use on normal roads.  Oh, and there were no doors either, the crew had to enter and exit through hatches on the roof.  Small wonder this example has seen better days!

Just offshore the Dundrennan range safety boat had moored.  We knew that the firing range was active, and that the coast to east of Little Ross Island was out of bounds.  To avoid causing any inconvenience, we spoke to the range boat on VHF and outlined our plan to keep well clear of range activity by heading directly into Kirkcubright Bay, and arranged to call again when we were heading outbound.  This information was acknowledged by the crew and we got a cheery wave as we headed out on the second day of our Solway sojourn.
Posted by Ian Johnston at 20:26