An orange glow on Loch Ailort 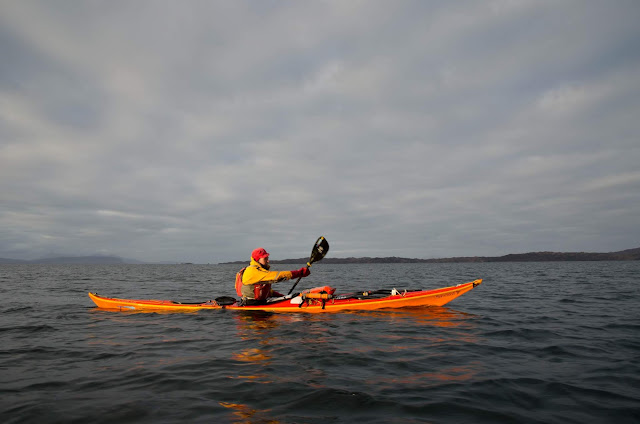 Having said our goodbyes to Lorna and Allan at Samalaman Donald and I headed back out onto the Sound of Arisaig.  Th high pressure weather had introduced a cloudsheet which almost obscured the whole sky, but not quite.  Donald's distinctive orange Nordkapp was caught in a shaft of sunlight and fairly glowed against the muted shades of sea and sky. 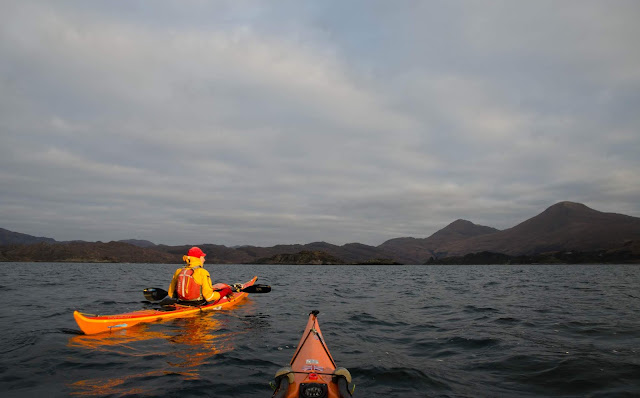 You'll notice that even when I was close by, the light continued to pick out Donald rather than me....truly the sun must shine on the righteous!  Ahead of us lay the entrance to Loch Ailort with the outer set of islands which guard the approach.  To the right the familiar outlines of the Rois-Bhein (Roshven) hills form the southern skyline.

The largest island at the entrance to Loch Ailort is Eilean nan Gobhar (Island of the Goats) which was briefly lit by a patch of sunlight - the last blink we'd see on this winter afternoon.  The island has the remains of two vitrified hillforts on the highest parts, though you need to look quite carefully to find the fused sections of wall.  The outer (west facing) shore of this small but rugged island is subject to quite rough conditions from the swell which rolls in from the Sound of Arisaig and from the tidal stream which forces around the island but there's a boulder beach on the eastern side which offers a landing in reasonable conditions. 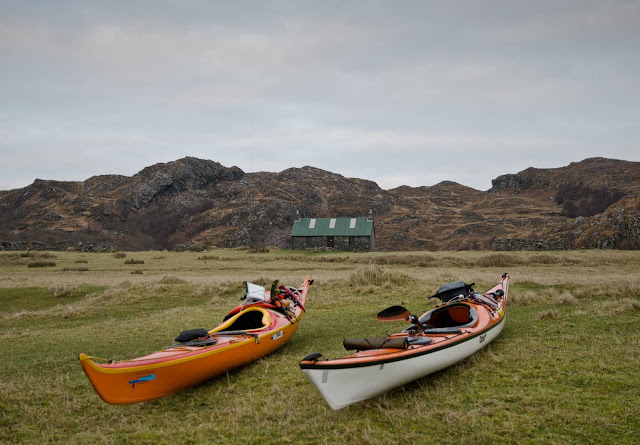 Passing inside Eilean nan Gobhar brought us to the outer part of Loch Ailort and to a beach on the Ardnish peninsula below our destination for the night..... 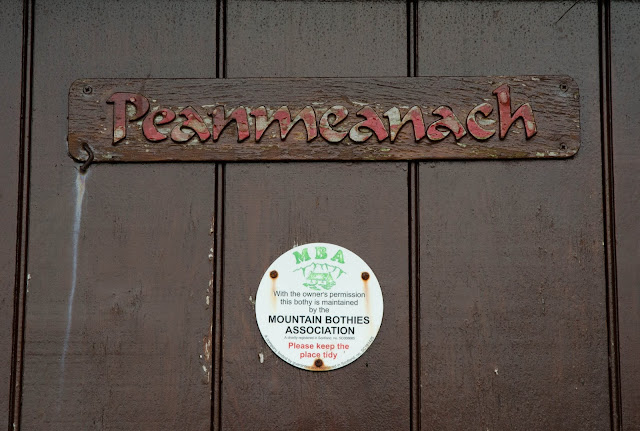 ...Peanmeananch bothy.  One of the larger and more popular bothies,we were surprised to find we were the only "guests" - though another couple arrived about 30 minutes later having walked in from the north.  Peanmenach is looked after by the Mountain Bothies Association and as for all the bothies in the organisation's care exists "for the use and benefit of all who love wild and lonely places".  I've been a member of the MBA for many years; the whole concept is a remarkable one - a place which belongs to the landowner, cared for by volunteers and open to all without charge or booking, subject only to a common sense code of practice.  The MBA plaque on a door is always a great sight at the end of a day!

Peanmeanach has two downstairs rooms and a floored loft upstairs.  Donald and I moved our kit upstairs and left the downstairs "bedroom" for Ollie and Leanne.  Over dinner we shared stories and experiences with our new companions.  Winter camping is a joy in itself, but it was likely on this cold night that all of us would have retired to our tents soon after dinner if we were camping.  No such requirement on this evening though...... 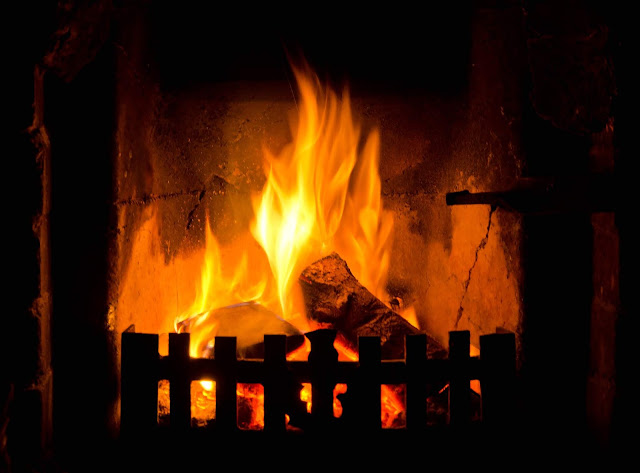 ...as we'd all brought fuel for a splendid fire!  Sea kayaks have great carrying capacity and we'd brought lots of wood and offcuts of oak casks left over from handcraft work.  Ollie and Leanne had carried in wood too, so we soon had the main room toasty warm and lit with another orange glow on Loch Ailort.
Posted by Ian Johnston at 08:00