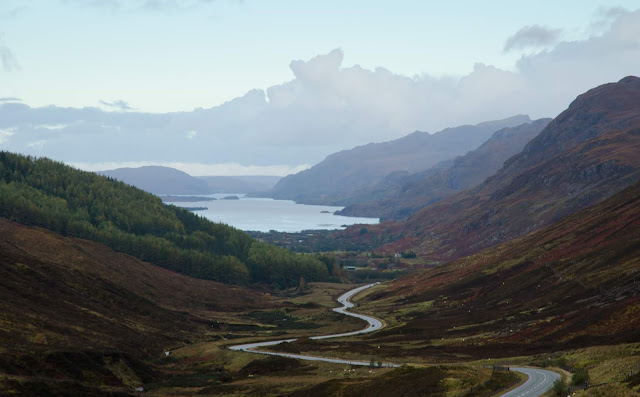 After what has been far too long, due to either work commitments or poor weather, I planned a day kayaking - but on this occasion not sea kayaking.  Mid to late October sees the very best of the autumnal colours in Scotland and I wanted to experience the colour show from the water.

A drive across northern Scotland on an early morning brought me to the head of the road which snakes down Glen Docherty to the small village of Kinlochewe.  The prefix "Kin" is an anglicisation of the Gaelic Ceann, indicating the head of a loch or glen.  Kinlochewe is a bit of an anomaly, because the village sits not at the head of Loch Ewe, but at the head of Loch Maree.  Loch Maree is drained by the River Ewe which does lead to salt water in Loch Ewe - confused?! 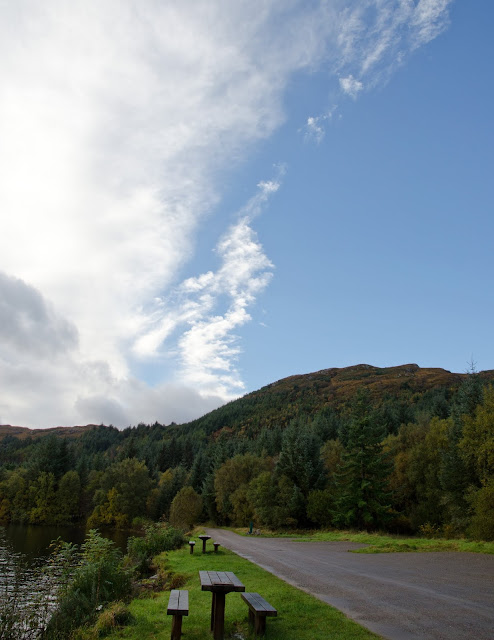 It had been a grey morning all the way over from Aberdeenshire but the forecast was for clear skies and sunshine - and sure enough as I got ready at Slattadale on the shore of Loch Maree the cloud sheet was peeling away. 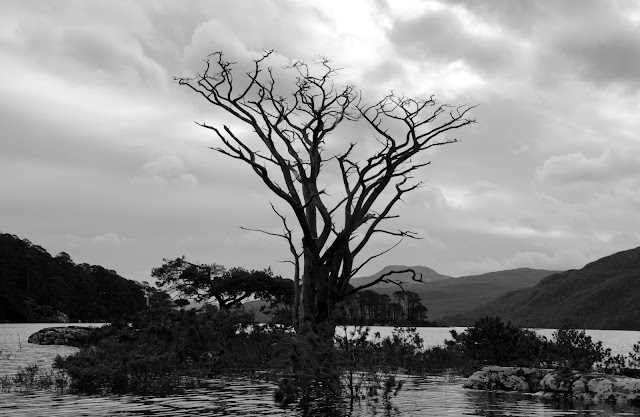 During the previous days Scotland had seen a real east/west weather split with truly torrential rain deluging the western side of the country while the east remained fairly dry.  Such was the volume of rain that Loch Maree was a good way above its usual level - by some half a metre. 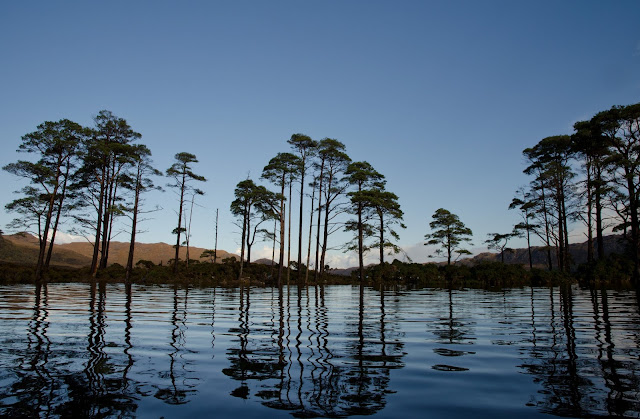 I headed out to the nearest of the islands which are such a feature of Loch Maree, and into a seemingly drowned landscape where one could paddle among the bases of tall pines. 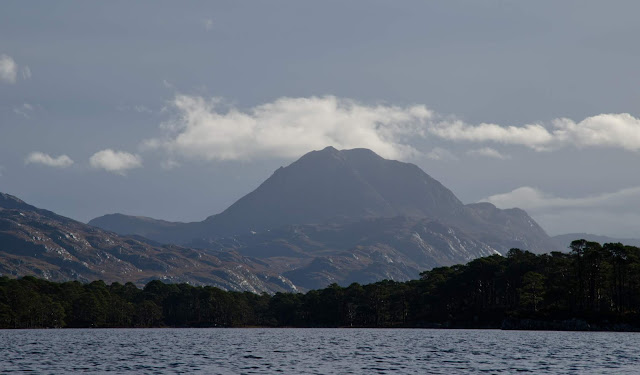 The other great feature of Loch Maree is the grand backdrop of Slioch (the spear), one of the most prominent Munros and adding so much to the character of Loch Maree. The clearance in the weather hadn't yet reached that end of the loch and Slioch was just emerging from cloud, backed by a solid grey wall. 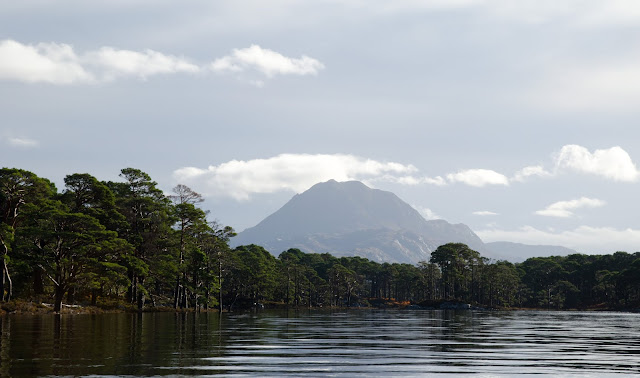 Add in the pines of the islands and you have a quintessentially Highland scene.  I set out to paddle through, around and among the islands as my route for the day. 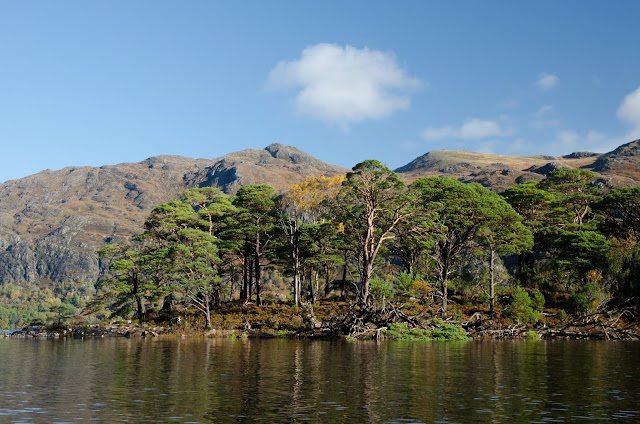 There was real warmth in the sunshine and with no wind it was turning into a beautiful autumnal day.  Thus far the colours had been predominantly the rich dark green of the pines and the warm brown of the hillsides....... 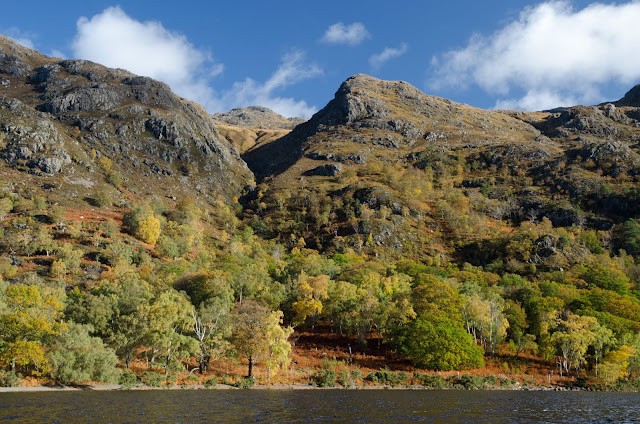 .....but that all changed as I passed around the outside of the islands and the view to the north eastern shore opened up - a riot of gold and yellow with the russet of bracken below; just stunning. 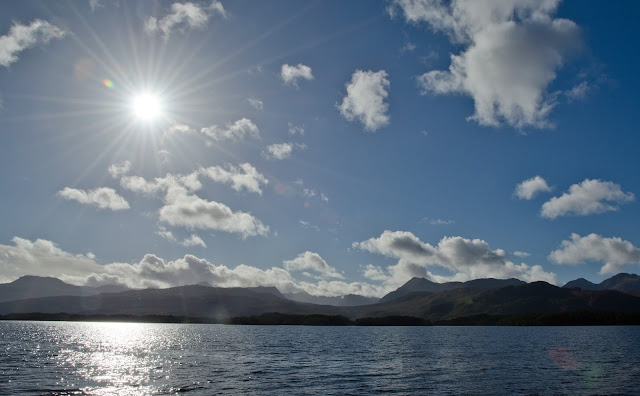 On the opposite side of the loch a searing brilliance of sunlight rendered everything into silhouette. 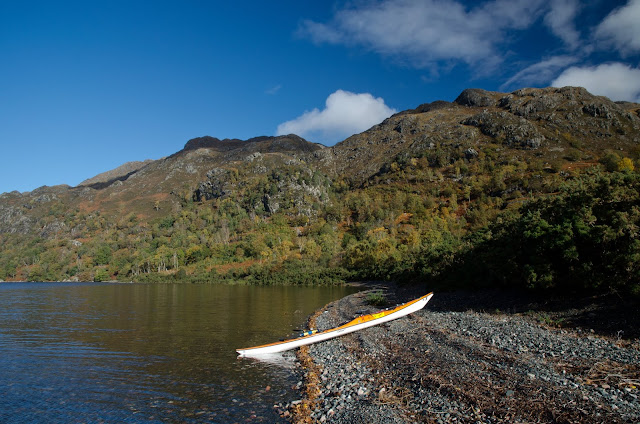 Amongst all this dazzling light and scenery, I found a lovely spot to land and enjoy a leisurely late breakfast.
Posted by Ian Johnston at 21:28