"It's too early in the year!" - an island journey

The next series of posts will cover a winter journey around the Small Isles of the Inner Hebrides undertaken with my good friend Douglas during the last few days of February and into early March - very much winter in Scotland. We'd had this trip planned since the previous summer, but due to either unsuitable weather or our various commitments it hadn't been possible until a weather window of sustained high pressure was forecast for late in February.  We'd not long returned from a couple of days in Arisaig, so "Brownie Points" had to be earned prior to being allowed out to play....

We hoped to visit four islands in our five day journey; to paddle as much of the coastline of each as we could and also to explore a little more of each island on foot where possible.

Douglas will also be  telling the story of this trip on his blog with some wonderful images.  The story starts here - well worth checking out! 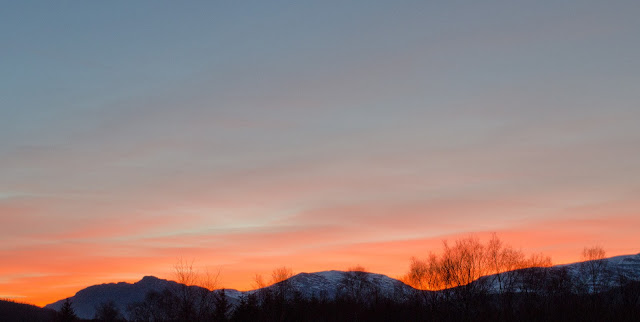 I left home at 4am to meet up with Douglas at Mallaig - the timing was necessary as we had a ferry to catch.  It was well below freezing when I left home in Aberdeenshire to cross the spine of Scotland to the west coast.  Dawn washed across the sky in my rear-view mirror as I passed Loch Laggan; I hoped that the clear sky was a good omen. 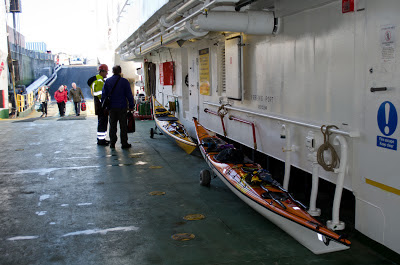 We packed our boats with food and gear for five days and left our cars in the car park.  Kayaks go free on Caledonian MacBrayne's (Calmac) ferry services, which is a real bonus for travelling to and between islands.

This is probably the right point in the story to note some of the approach Douglas and I used in planning this journey.  We would use the ferry for the initial crossing to Rum.  This is a long-ish crossing and although well achievable by paddling, would take a full day - we preferred to paddle the islands instead!

We were fully prepared to camp or use bothies on each night of our journey, though we would use other accommodation options if available.  The overriding planning principle was flexibility - in timings, route and where we ended up.  The trip was carefully timed with the Calmac winter timetable - by leaving on a Tuesday, we could paddle our hoped for journey from the northernmost island to the southernmost (which was with the predicted wind direction), with the option, if weather-bound on any one island, to wait just one day to use the ferry to reach the next island.  This flexible approach meant that we didn't pre-book any accommodation.  As it turned out, this added tremendously to the experience.

We were fully self-sufficient for food but hoped to spend some money on meals in the communities we visited if possible.  The end of winter is a marginal time for many small businesses in these communities, and besides, what better way to experience the best of the islands?

We pulled our boats onboard the MV Loch Nevis on trollies - if you do this trip or similar; a trolley is a must to move a heavily loaded boat on and off the link-spans.  On the vehicle deck, the crew were  welcoming and genuinely interested in our plans.  Kayakers are not uncommon in the summer, but no-one could recall kayaks attempting an inter-island trip in the winter.  The title of this post is a reference to the ground-breaking journey undertaken by Seamas Adam and Alastair Dinnet ("The Canoe Boys") in the autumn of 1934.  On their epic journey from Bowling in Glasgow to Kyle of Lochalsh they were continually told that it was "too late in the year".  If you haven't read this classic, Douglas and I would heartily recommend it!  One really nice aspect of our short journey was that, from the outset on the Loch Nevis, our plans were known, and our journey remarked upon in the islands we visited.  Not in any way comparable to the fame of the Canoe Boys, but it was fun! 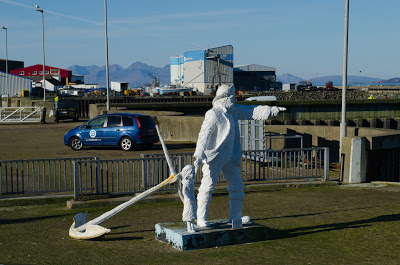 As the Loch Nevis left Mallaig we passed the statue of a fisherman and his daughter pointing the way to the sea.  This statue by Mark Rogers of Knoydart has been cast with concrete legs to keep it in place in gales! 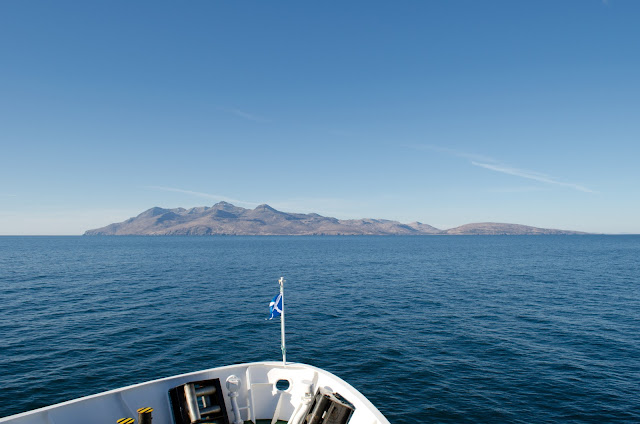 We took second breakfast on the Loch Nevis then went out on deck to watch the approach of our stepping-off point of the Isle of Rum.  The hills of Rum would be our constant skyline companion over the next five days - a reassuring sight. 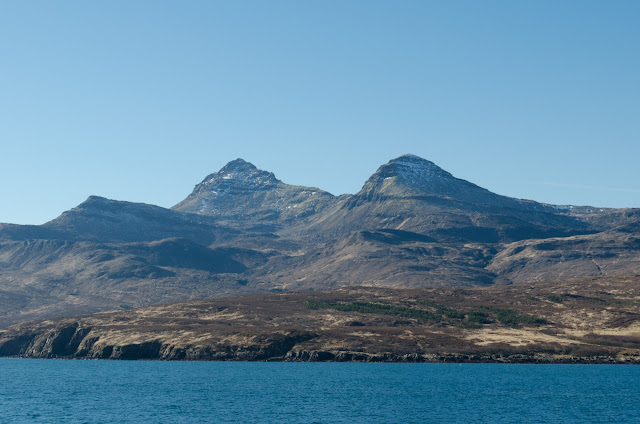 As we sailed into Loch Scresort, the grand Norse-named hills of Askival (Ash tree hill) and Hallival (? sloping hill) dominated the skyline.  the name "Rum" itself seems to be pre-Gaelic and possibly a Norse-derived "broad" island. 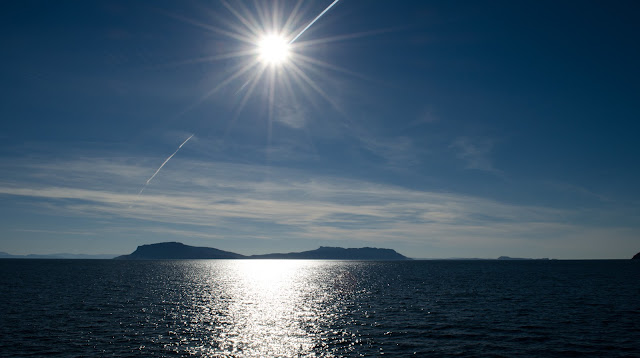 To the south and in the eye of a glittering sun lay the island of Eigg.  If all went well we hoped to visit Eigg two days later, but for now our eyes were on Rum.... 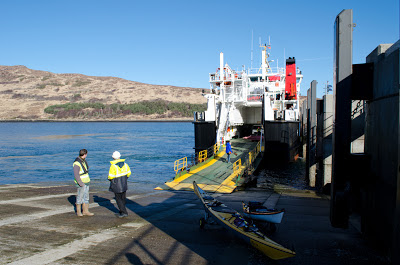 We disembarked from the MV Loch Nevis at the ferry slip in Kinloch and waited for her to depart on her onward journey.  Our own journey was about to start in earnest!  But before we set out we had the first of a series of coincidental meetings which did much to shape our journey.  A lady came down to the slip and asked jokingly if we were, by chance, the Doctor she was expecting on his rounds?  Well,  Douglas is indeed a Doctor - but not the expected one...   It turned out that Rachel was the manager of the Rum hostel.  She asked about our journey and let us know that although the hostel didn't really open until April it was open to accommodate seasonal workers, and that there were beds available should we need them.

We've always believed that you can do much to create the conditions in which good luck might happen - this was one such occasion.  We now had an option for future nights, although our plan was to spend the night on the far side of the Isle of Rum - time to get on the water!
Posted by Ian Johnston at 22:25