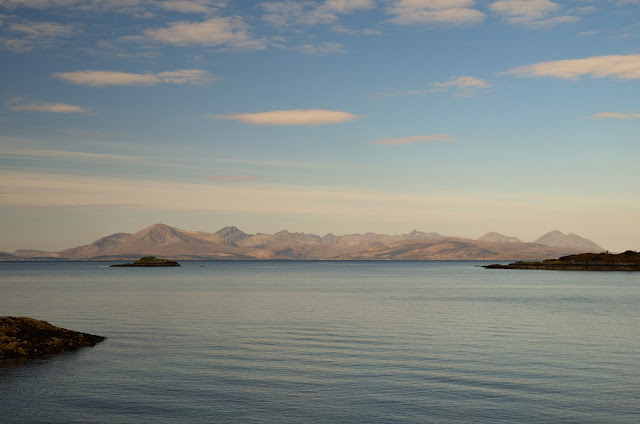 The morning weather was as lovely as the evening had been, clear and calm.  The view to the Cuillin of Skye was our constant companion on this trip and one of the highlights with changing light and angles subtly altering the colour and form.  We've all got great memories of climbs on that great arc of ridge - exhilarating and sometimes downright frightening! 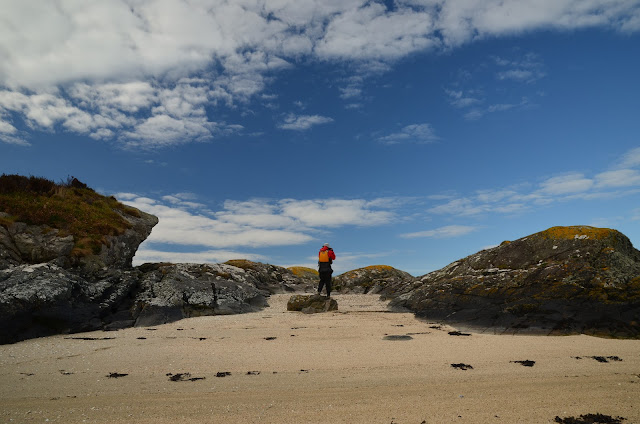 We had a leisurely breakfast and got on the water - within a few minutes we were back ashore on a tiny island with a "now you see it, now you don't" sandy beach which disappears at higher states of the tide.  We'd wanted to stop here because it's rather a fine viewpoint; the first image in this post was taken from the beach. 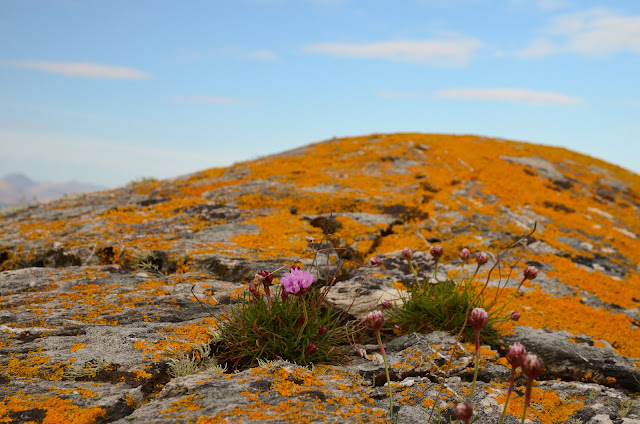 The view near to hand wasn't bad either - vivid orange lichens glowing in the morning sunshine, set off by a few Thrift flowers.

Orange seemed to be the theme of the morning; we returned briefly to Kyleakin to collect some things and whilst preparing to get back underway we noticed a bright orange vessel passing under the Skye bridge. 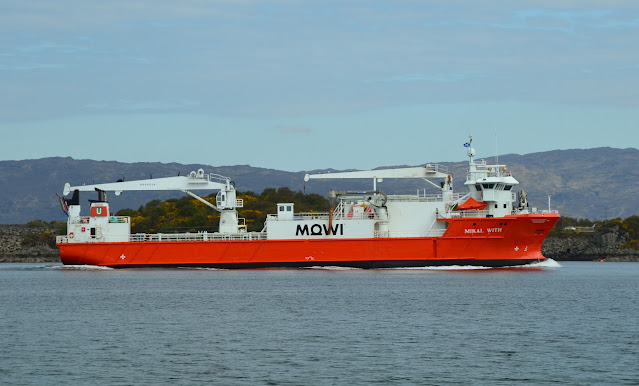 She's the "Mikal With", a 67 metre long palletised cargo vessel.  On most marine vessel websites she has a blue hull and a different owner than recently.  She's either owned or on charter to MOWI, a Norwegian aquaculture company. 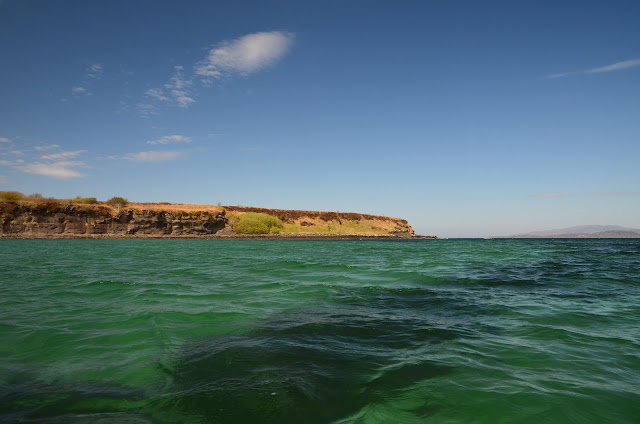 We set out again from Kyleakin and aimed for the island of Pabay, which we intended to use as a stepping stone on our way to an intended camp on Scalpay.  The breeze had been slowly building and once clear of Kyle Akin it became quite strong from straight off the Skye coast (our port quarter).

We put our sails up to take advantage of the push and were absolutely blasted across towards Pabay.  I found this a really great sailing run, but was certainly not prepared to stop paddling in order to take photos!  Our average speed on this blast was 9.4km/h, or nearly twice cruising speed..... 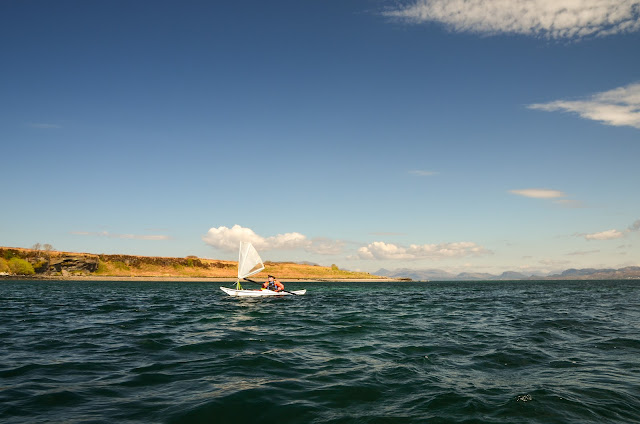 Although a fast passage, it had been an energetic one - it is paddle sailing rather than just sailing!  We were all ready for a lunch stop by this point. 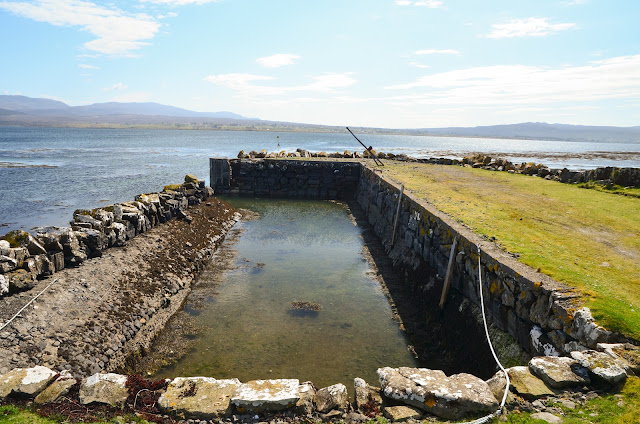 Approaching Pabay the wind seemed to ease  a little and we dropped our sails to paddle into the tiny harbour area.  Donny had motored along to Broadford in his F-RIB and made a direct crossing from there to Pabay; he had a pretty wet ride! 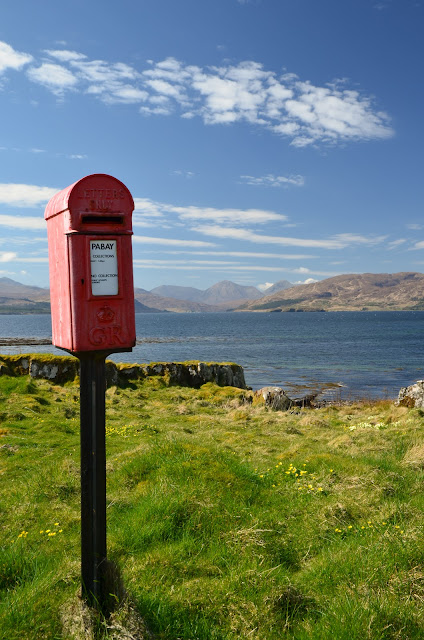 One of the iconic sights on Pabay (Norse: Priest Island) is this post box.  It seems incongruous since there are only a couple of houses on the island but is here because the island issues it's own postage stamps for mail which is transferred into the Royal Mail system in Skye (from where it needs Royal Mail stamps). 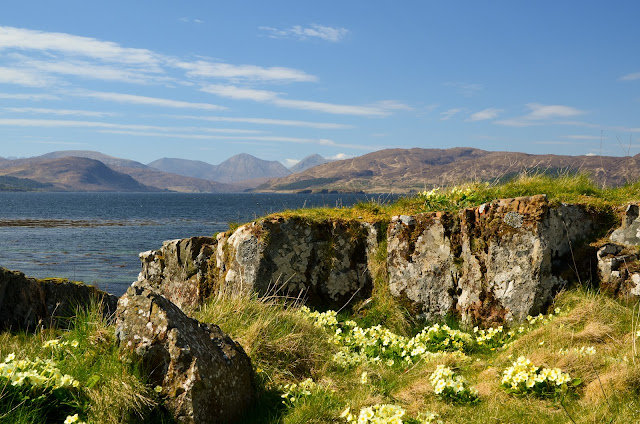 Sheltered from the breeze (which was becoming stronger) we lazed in warm sunshine, surrounded by clumps of Primroses.  The pale yellow of the flowers set against the blue of sky and sea was gorgeous. 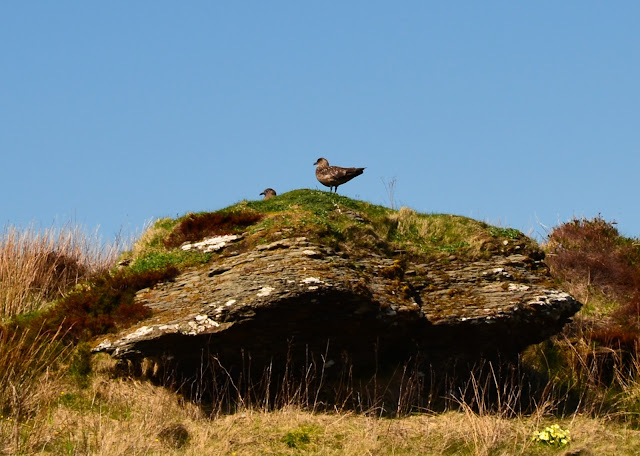 Above where we lunched a pair of Bonxies (Great Skuas) watched us warily.  These impressive piratical predators had picked a nest site with a great view over the low lying island. 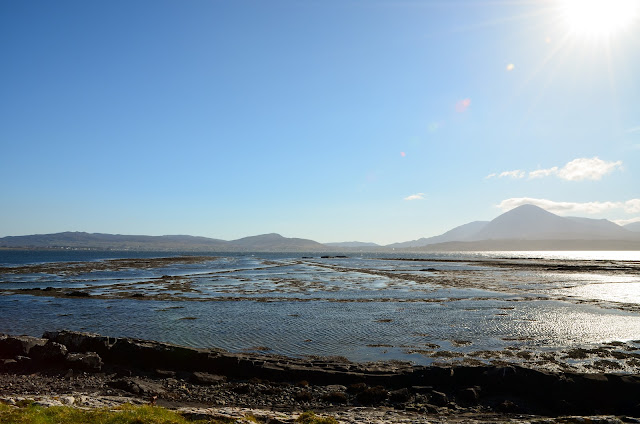 One of the features of Pabay is its geology which is shales intersected by dykes of harder rocks.  The whole island is almost flat and nearly doubles in size as the tide falls from high to low water, leaving the geometric patterns of dykes.

Another feature is that, despite being flat the island has virtually no wild camping spots accessible from the water.  The rock layers from a barrier and the softer rock gives good growing conditions for brambles and tangled low undergrowth.

This gave us a problem; we were pretty much pinned on Pabay.  The wind had continued to rise and in the Sound between Pabay and Scalpay was approaching a Force 6.  None of us was keen on trying the paddle across unless we really had to, but despite trying along the sheltered parts of Pabay by kayak we could find nowhere to camp.  We returned to the harbour to have a re-think.  Douglas and I walked up to the "big house" which is undergoing renovation by a new owner of the island.  We explained our situation and asked if we might camp near the harbour.  The Access provision in the Land Reform (Scotland) Act is wide ranging but does not cover access near to houses or infrastructure.  The owner was most kind in allowing us to camp for the night and it was really appreciated by us. 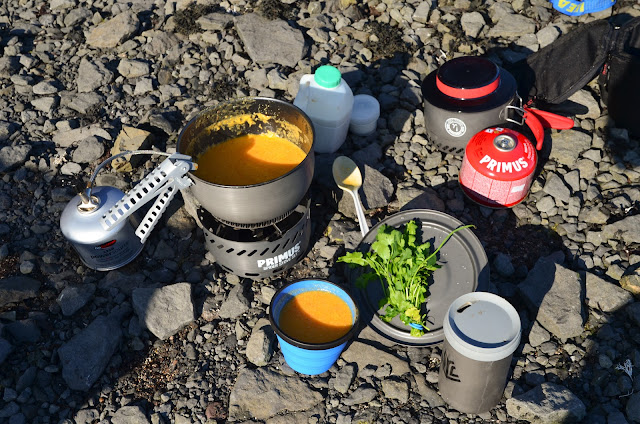 We pitched our tents in areas which wouldn't affect access to and from the harbour itself and found a spot out of the wind to cook dinner - preceded by fresh soup.  The day had been recovered but our plans would need to be altered.  The forecast was for the wind to drop almost completely by morning, so we decided on a paddle to the Applecross shore via the Crowlin Islands. 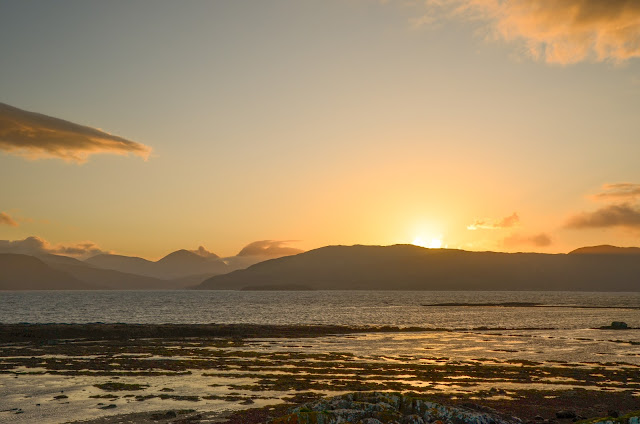 As the sun set, the wind came around a couple of points and seemed to drop by several degrees in temperature - it was pretty cold within minutes.  Dinner done, we retired to the tents (which we'd pinned very securely to Pabay) for an early night.