Convergence point: the point of converging, a meeting place, the meeting point of two converging lines, the point at which two sight lines meet on a distant object


A spell of relatively settled weather in mid October 2016 found four of us making for Glenfinnan at the head of Loch Shiel. Douglas and Mike travelled from the south west, Lorna and I travelled from the north east of the country - our point of convergence was to be the Glenfinnan House Hotel, where we'd arranged to leave a car for a modest parking fee.  We'd also been given permission to launch from the hotel, which greatly simplified setting out.

You will be able to follow our trip in "Seakayak Stereovision" by reading Douglas' account starting here. 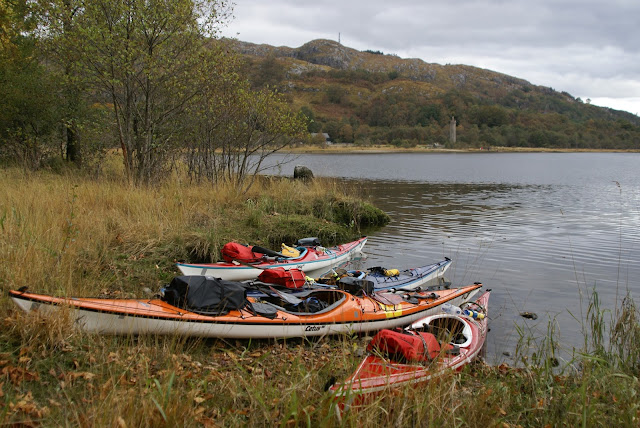 Mike and Douglas arrived first, and while Lorna and I packed our boats they ran the shuttle down to Glenuig.  Our plan was to repeat a trip that Douglas, Mike and I had enjoyed in March 2015; paddling the length of freshwater Loch Shiel and then the River Shiel to salt water Loch Moidart and on to Glenuig.  The distance by road between Glenfinnan and Glenuig is relatively short; our route would be much longer and we planned to spend two nights camping en route.  Our boats were laden with goodies and each had a kayak trolley strapped to the rear deck for the portage we'd need to make around the exit of the river.

Allan and Lorna had been keen to do this trip; and Mike, Douglas and I were very keen to experience it in what we hoped would be great autumnal colours.  Unfortunately Allan was unwell and wasn't able to join us - which means we have it on our list for a future adventure with him! 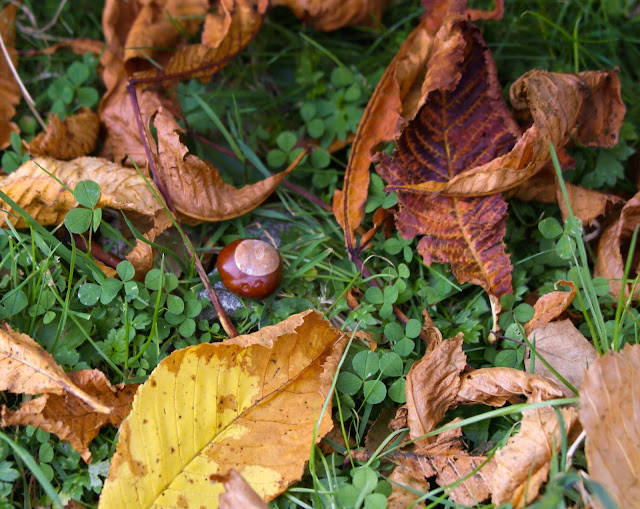 We set out on an overcast morning, but with a forecast of two fine days prior to the arrival of a deep Atlantic low pressure system.  The cloudy sky had the effect of enriching the browns and yellows of fallen leaves through which we rustled our way to the shoreline.  Our launching point was beneath a large Horse Chestnut (Aesculus hippocastanum) tree, with fallen "conkers" scattered below it. 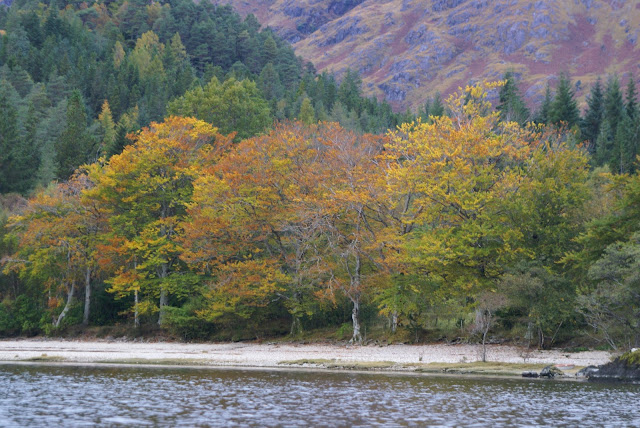 We hoped to enjoy the best of the autumn colours; both Loch Shiel and the river are lined with deciduous woods for much of the way.  Our late winter trip in 2015 had taken place well before the leaves were on the trees, so this would be a contrast.  Beech trees along the shore were in various stages of colour set off by the dark green of conifers on the hillside - a good start we thought.....

By contrast the south east shore is bare in the upper part, with steep mountain slopes dropping directly to the shore of the narrow loch.  We weren't complaining; the view was grand and we were off on another adventure!

We found ourselves moving out to the centre of the loch and lining up with the convergence point of the ridges on either side - a subconscious process and exactly the same as we'd previously experienced here.  With views ahead down many kilometres of paddling, it was a good place to be.
Posted by Ian Johnston at 20:59