A meeting of waters 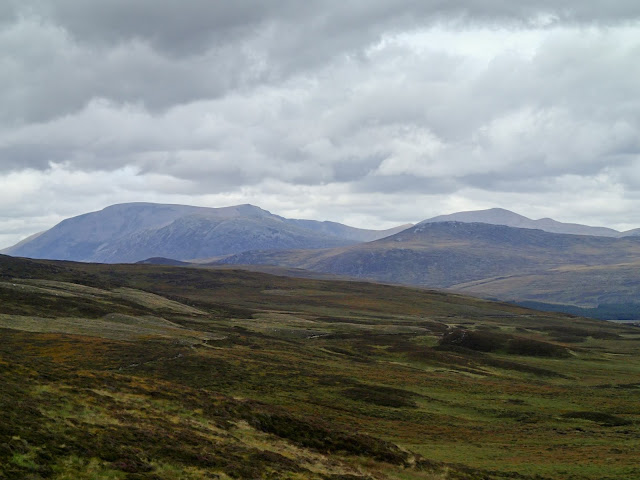 Climbing up beyond Bynack Lodge, there's a last long view over towards the main Cairngorm group; Beinn Bhrotain in the middle distance, Cairn a Mhaim and Ben Macdui beyond.  The camera hasn't caught it, but I could clearly make out the cliffs of Coire Sputan Dearg (corrie of the red spouts) to the right of the summit cone of Ben Macdui. 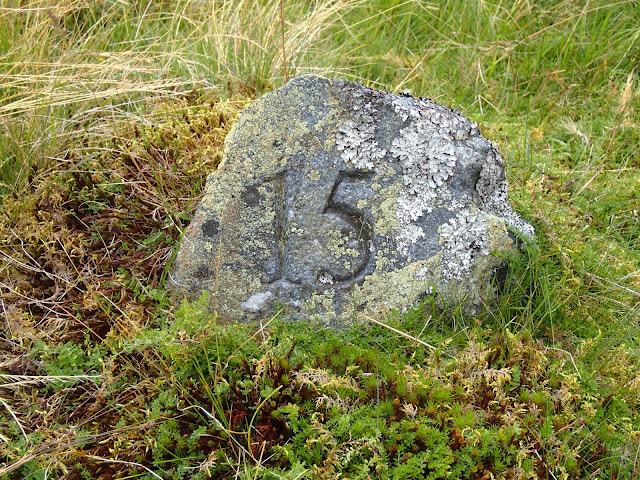 The path towards Glen Tilt then enters a green valley below the hidden Loch Tilt known as Bealaidh Sidhean (fairy pass) , which probably recalls the grim Celtic "Sithean" (pronounced Shee-an) rather than the type of fairies with twinkly green outfits.  I've walked this stretch several times but hadn't previously noticed the small milestone in the mossy ground.  Just about 15cm tall, I think the 15 refers to the miles from Blair Atholl to this point.  It's also just about at the county boundary where one steps from Aberdeenshire into Perthshire. 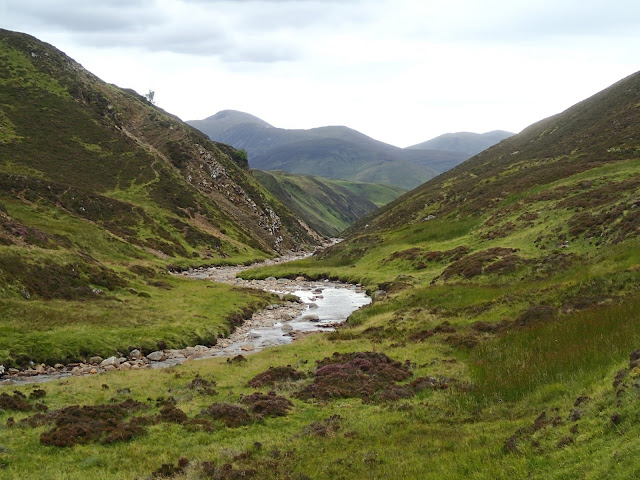 Having crested the rise and gone "over the hill", the way ahead follows the clear stream of the Allt Garbh Bhuidhe (rough yellow stream) as it enters a narrow valley - ahead there's a glimpse of one of Perthshire's best hills, the multi-summited Beinn a'Ghlo which has three Munros.  I tried to recall the last time I'd climbed that fine ridge and decided it's too long ago....another one to go back to soon!

The Garbh Allt Bhuidhe runs through quite a remarkable gorge which looks like a glacial breach.  The path traverses close to the burn, sometimes at a level with the water and sometimes quite high above across steep slopes. 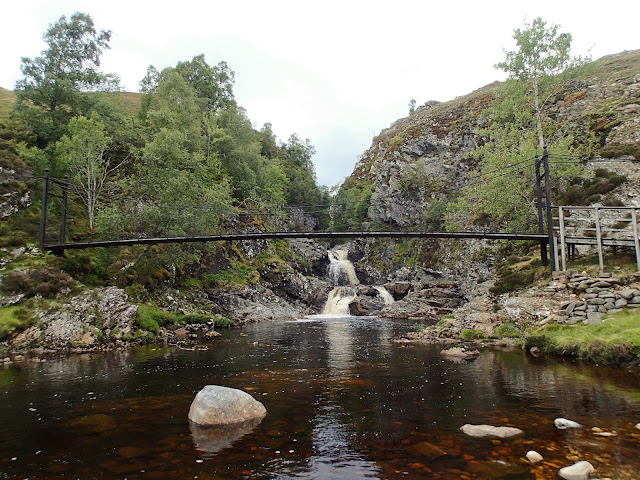 Eventually the burn is joined by the larger Tarf Water at Falls of Tarf, spanned by an elegant iron and timber bridge.  In dry conditions in one of the driest summers for years this is a quiet, pleasant spot; in spate these falls are an impressive sight. 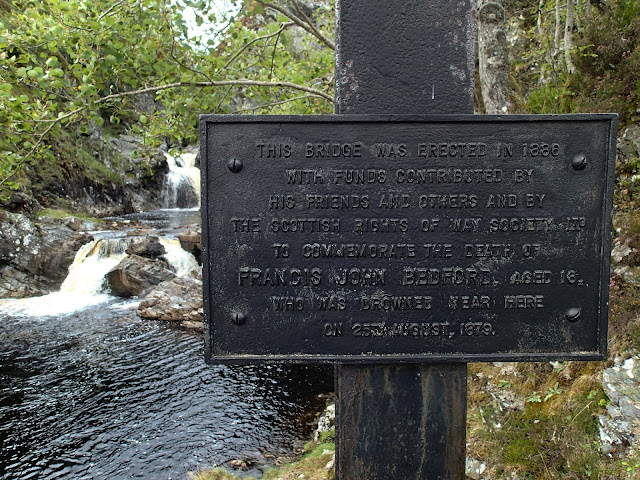 The bridge is known as the "Bedford Memorial Bridge" and commemorates a young man drowned trying to cross the Tarf here in August 1879.  This is a slightly unusual meeting of waters; the Garbh Allt Bhuidhe is joined from the west by the Tarf Water and from the east by the Allt a'Ghlinne Mhoir (stream of the big glen), but from this point the combined waters enter Glen Tilt and are known as the River Tilt.

My route now left the main Braemar to Blair Atholl path and headed up the north bank of the Tarf Water.  There's a path shown on the OS 1:50,000 map, but it's a figment of the cartographical imagination.  The going was terrifically hard on rough and boggy ground, and I wouldn't wish to walk this section again any time soon. 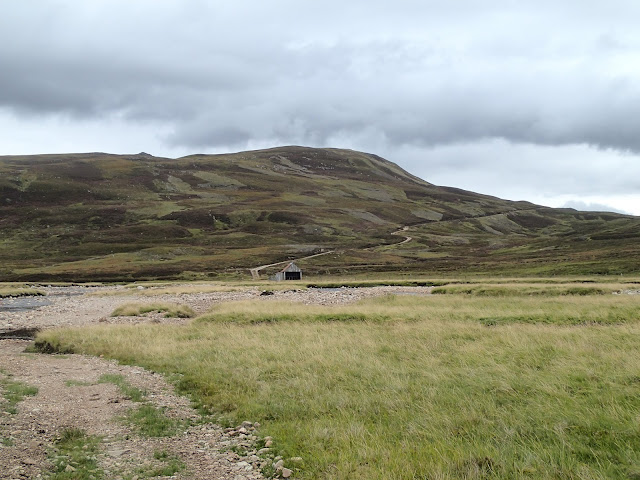 Eventually I arrived at a much flatter area with better walking ground, near the pony stable below Dun Mor.  THe track coming in around the hill can be accessed from Glen Tilt some 3 kilometres down Glen Tilt from the Bedford bridge and if coming this way again I'd use this longer option.

I now had to decide which side of the Tarf Water to use in order to reach my destination for the night; settling for the south side which gave reasonable walking partly on a vehicle track.  After what seemed a long time, my planned accommodation came into view...... 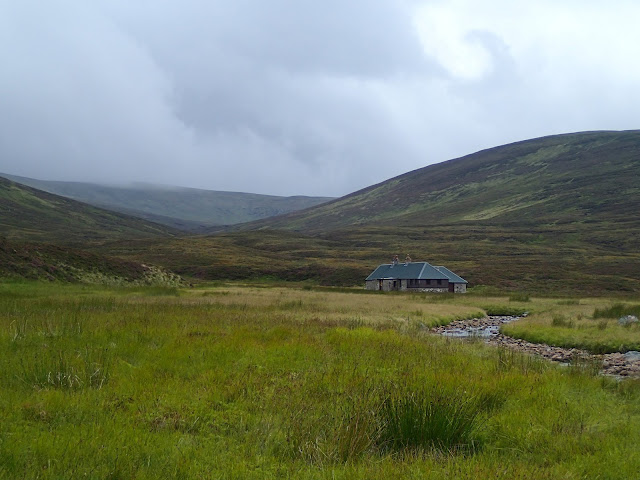 .....and after a long and exhausting day, it was a welcome sight - a building standing in splendid isolation in true "mamba" country.
Posted by Ian Johnston at 22:00