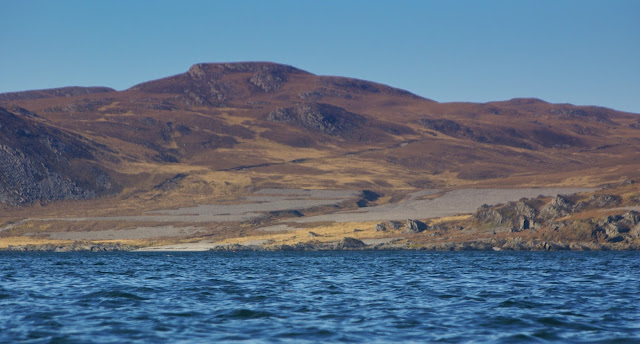 As we paddled into West Loch Tarbert, the sea loch which almost bisects Jura we got a helpful push from a breeze at our backs.  Across on the north side of the loch we could see a huge raised beach system, and we were heading for an even more remarkable example.

The beaches and terraces above the present-day shoreline are a legacy of the last ice age. As the ice sheet melted the immense weight pressing down on the land was released and the land began to rise in a process known as "isostatic rebound".  The north of the UK is still undergoing this process and there's an opposite sinking effect in the south east of the British Isles.  Isostatic changes are quite independent of the major (eustatic) changes in sea level - it's the land itself which is changing level. The resultant landforms such as raised beaches, dry stacks, arches and raised beaches can be be found in many places around the Scottish coast and on many of the islands. 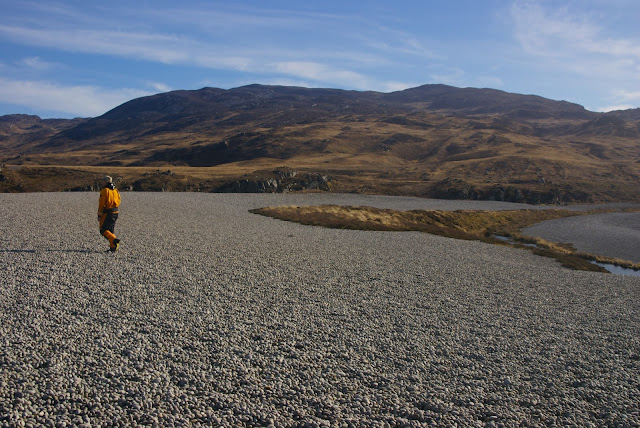 But this beach in West Loch Tarbert is perhaps the most remarkable I've ever visited.  A 750 metre crescent of pebbles rising 15 metres above the current sea level, the scale is quite difficult to convey without a very wide angle camera lens. 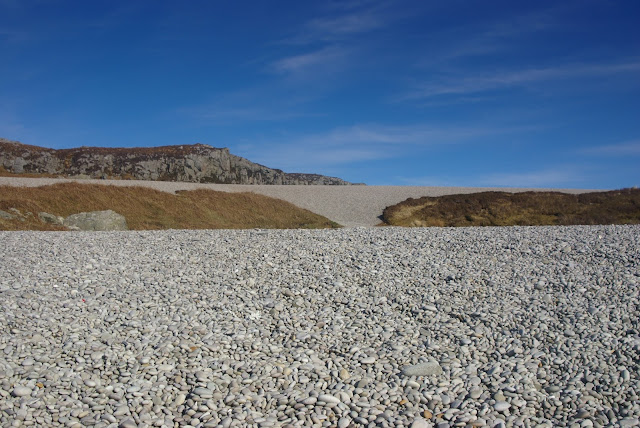 The very top of the beach has a narrow strip of vegetation, mainly heather with some grasses. 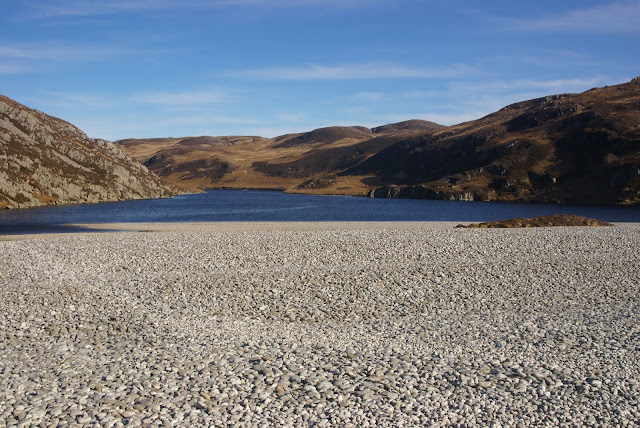 Behind the beach is a lochan held back by the pebble ridge; it has no visible outflow and the nearby burn of Abhainn Liundale also disappears into the pebbles- the water reaching the sea by filtering down the beach.  In this image there's a pale line across the pebbles which is one of the tracery of deer tracks heading to and fro.....

...clearly visible if this Google Earth image is enlarged. 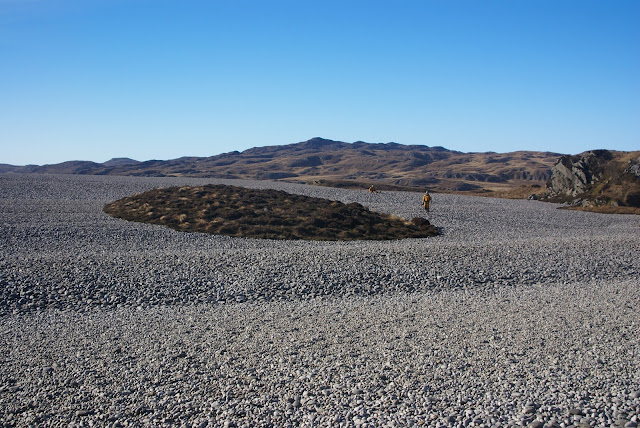 The whole beach looks as if it has been recently raked over, the pebbles are uniform and the surface smooth.  On the slope above the lochan there are a number of strange circular or oval patches of heather, arranged as if the whole beach were a vast Zen garden - and that's the feeling I had whilst wandering around.

Douglas captured the sense of the place during a previous visit in this image from above the beach and this one using a wide angle lens - in my opinion two of the most striking images from his very large portfolio. 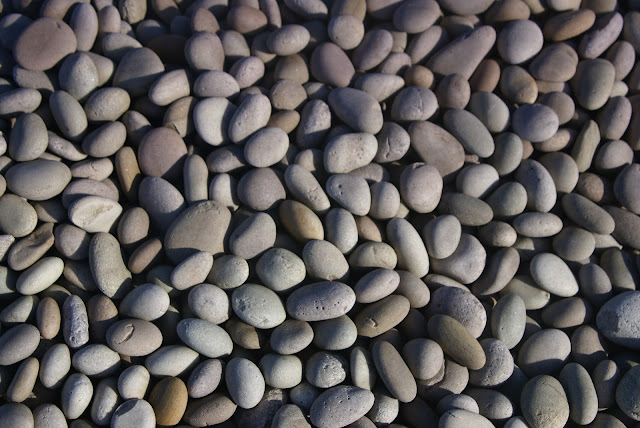 From a distance the beaches look ash grey, while close up the water washed pebbles seem to have little variation - they are left just as they were at the last high tide several thousand years ago - a remarkable relic. 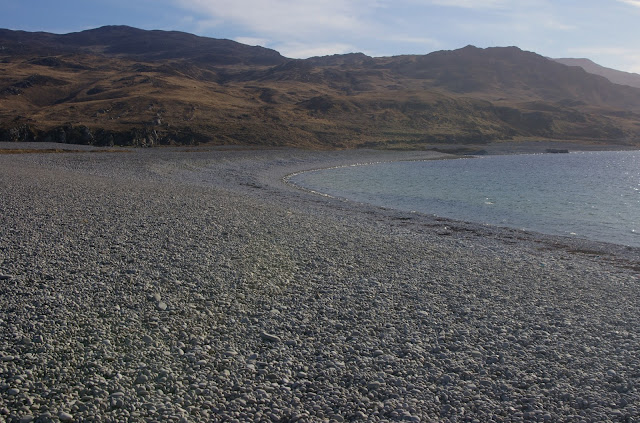 But down on the present-day high water mark a hidden beauty is revealed.... 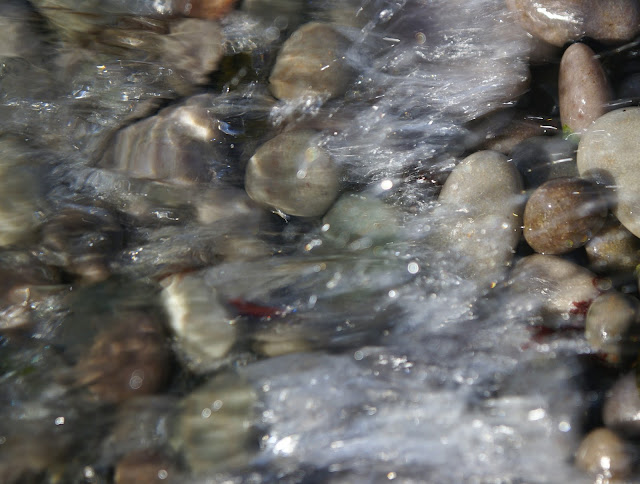 as the little waves rushing over the pebbles recede.... 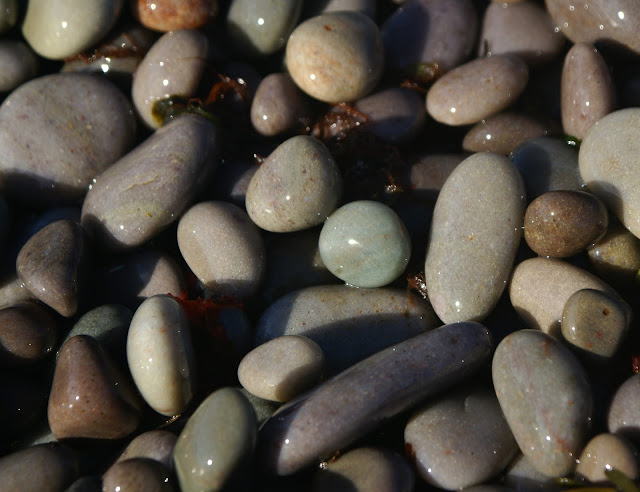 ...to reveal a subtle palette of greens purples and browns, a reflection of the landscape from which the pebbles have been drawn.

I left this beach with a feeling of having been in a unique and special place, perhaps all the more a privilege due to the difficulty of getting to it.  With an atmosphere all it's own, the "Zen beach" of West Loch Tarbert is a truly amazing place.
Posted by Ian Johnston at 10:51