An evening out on the Sound of Islay 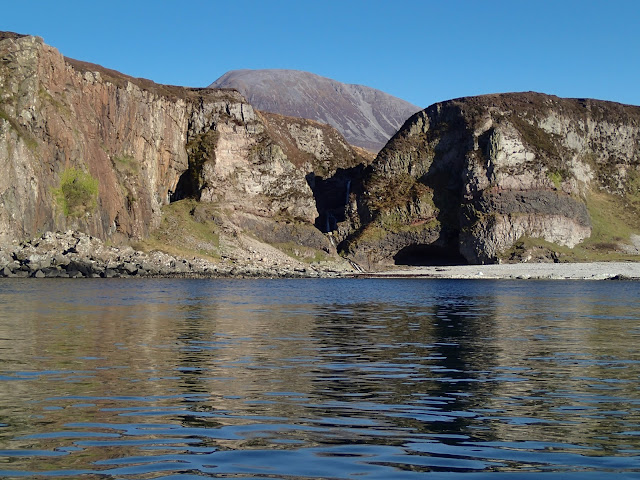 Almost as soon as we were back on the water from "Dyke beach" we passed this series of waterfalls cascading from the raised beach to the shore in three distinct bounds.  We marked this spot mentally as a potential stopping place for the following day, a beach with inbuilt shower! 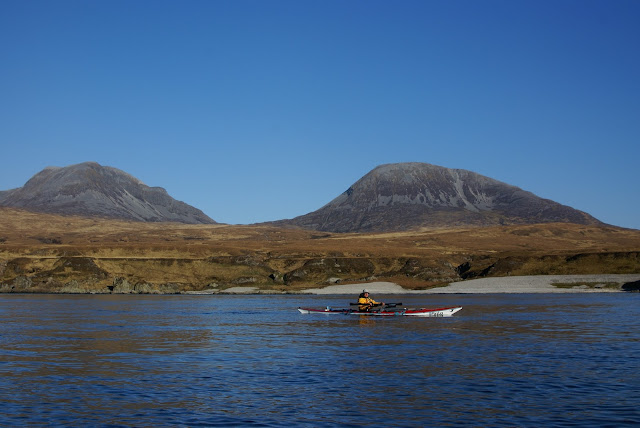 The late afternoon sun really enhanced the views as we paddled towards the Sound of Islay; two of Jura's great hills - Beinn an Oir (mountain of gold) and Beinn a' Chaolais (mountain of the narrows) were lit beautifully.  Gradually we were beginning to feel the pull of the south-going tidal stream as it poured into the narrowing mouth of the Sound of Islay and we hoped for a fast ride to our destination. 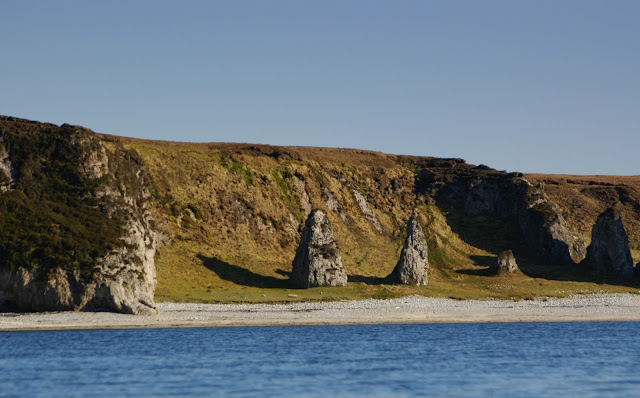 The rock formations continued to entertain  we weren't sure whether this pair of stacks looked more like fangs or dog's lugs! 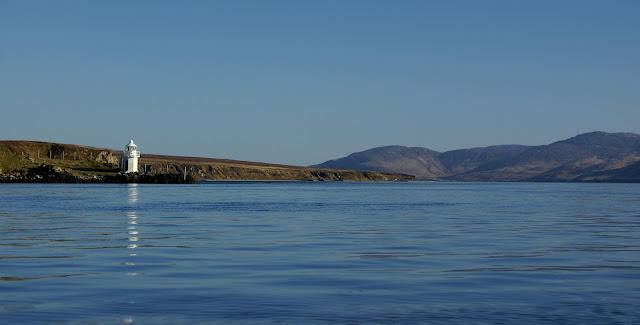 Soon we were approaching the narrowest part of the Sound, marked on the Jura shore by the light at Carragh an t-Sruith (pillar of the stream (current)) and really beginning to pick up speed..... 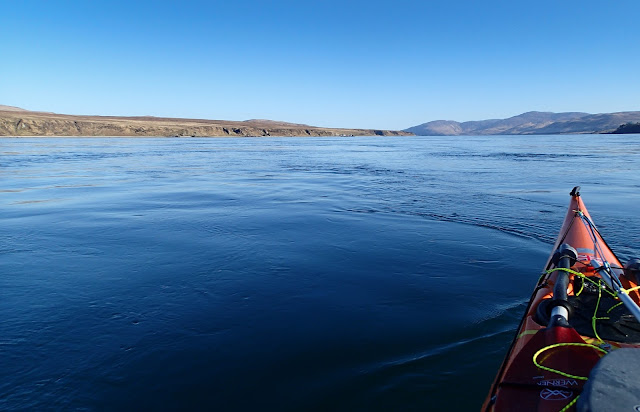 ..we were now well onboard the south-going tidal stream and it was running like a river.  The Sound of Islay has none of the underwater obstructions which cause turbulence in the Gulf of Corryvreckan, so in the absence of wind the flow is fast and smooth. 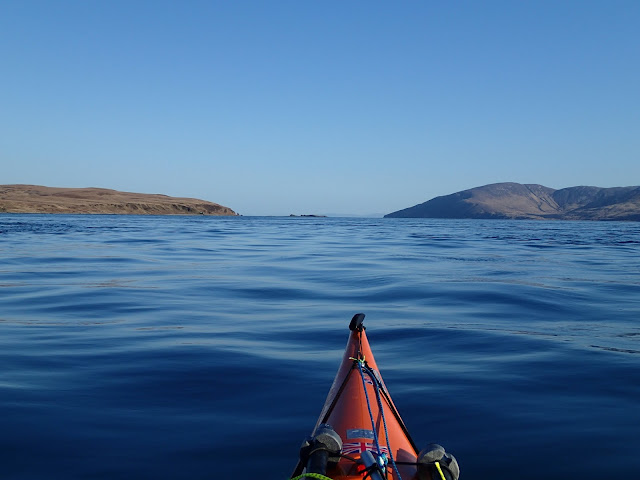 The view opened up as we sped south, reaching 16.4km/h or over 8 knots - this was great fun and I took almost no photographs, concentrating on catching the next accelerating swirl of the powerful tidal stream.  Our destination for the evening was on the Islay side of the Sound, below the prominent gully in the distance. 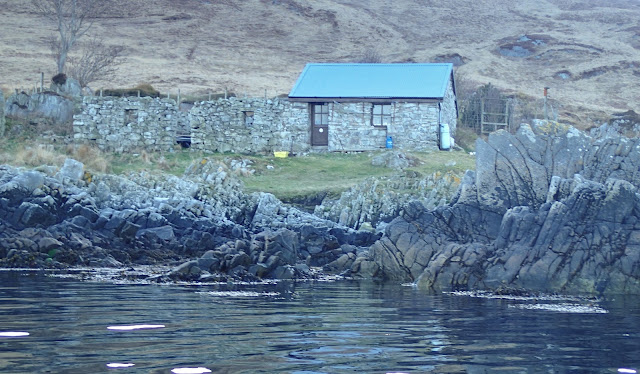 It seemed no time at all until we broke out of the tidal stream to paddle in towards An Cladach bothy. Noted as one of the very best coastal bothies, it's somewhere which has been on my "to stay in" list for some time.  If it has a drawback it's that the bothy can really only sleep four people - and a smell of smoke as we landed told us that it was already occupied.  The folk inside were clearly planning to be in residence for some time - piles of food and clean boots indicated a drop-off by boat.  No matter, we were equipped and prepared to camp - but we did wonder what the residents would have done if we'd been first to arrive! 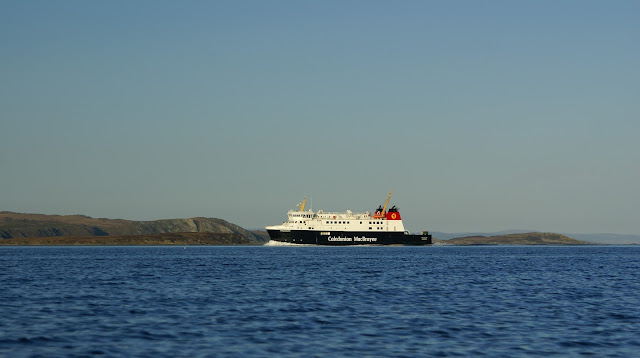 Time was short to find a suitable spot to land and camp as the evening was drawing on.  All of a sudden the Sound of Islay seemed a busy place as first the Calmac ferry "Finlaggan" steamed north towards Port Askaig...... 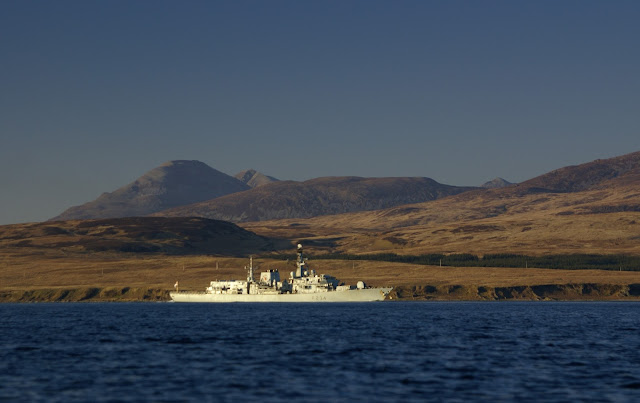 ...and passed HMS Iron Duke, one of the Royal Navy's Type 23 frigates on her way south through the Sound having participated in the Joint Warrior military exercise.

Once the wash from these vessels had passed we spied a patch of ground suitable for camping, but the nearest feasible landing was a few hundred metres away.  We transferred the kit we needed, got our tents up and our evening meal underway - we even managed a small fire around which to reflect on the day.  We may have missed out on the bothy, but our wild camp was very comfortable and we chatted late into the evening, our recollections of the day accompanied by a dram distilled not very far from where we sat.

And what a superlative day's sea kayaking it had been!  Since setting out from Glengarrisdale that morning we'd paddled 48 kilometres in 12 hours, visited gorgeous beaches, enjoyed an exhilarating swim and explored one of the finest, wildest and best coastlines anywhere; all in the most brilliant weather....... 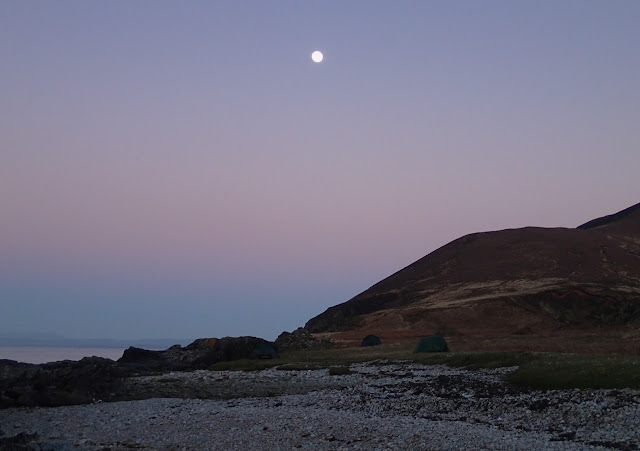