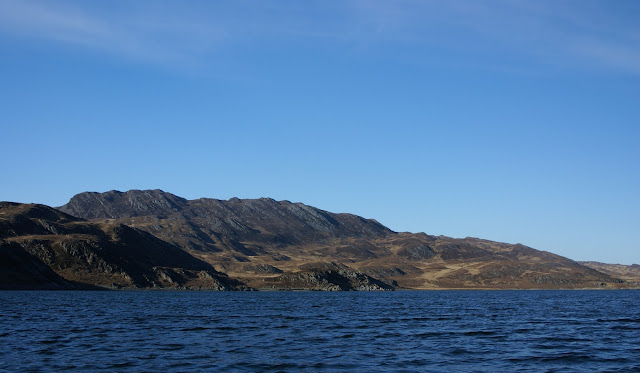 After leaving the "Zen garden" raised beach we continued through the narrows and into the middle part of Jura's West Loch Tarbert.  It was now early evening and we were keen to get to our planned overnight stop.  A light breeze helped us, we were able to use our sails in addition to steady paddling for much of the way.

Loch Tarbert has three sections; a wide outer section open to the prevailing swell and weather passing between the islands of Colosay and Islay, a sheltered middle section and a smaller inner loch accessed vai the most unlikely of channels.  We were heading for a bothy in the middle section which remains hidden on approach........ 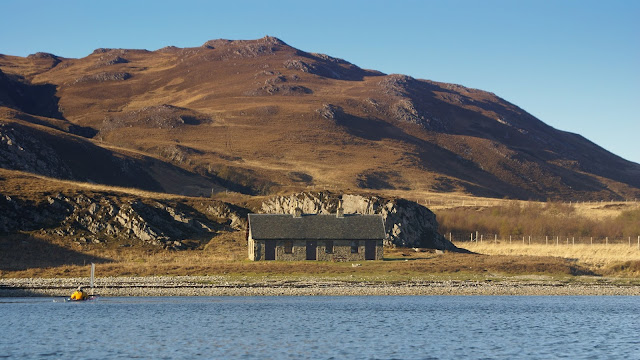 ...until a final corner is turned and the neatly kept bothy appears at the head of a small bay.  Our planned arrival time coincided with high water which meant that we had only to lift the boats from the water with no carrying involved.  This convenience did have a consequence though....we needed to be at the very head of the inner loch right on high water the following morning to avoid a long carry over mud.  As HW would be at 0641 we needed to be underway by 0600, but that was tomorrow's issue - for now we could enjoy being in this superb location and in warm evening sunshine. 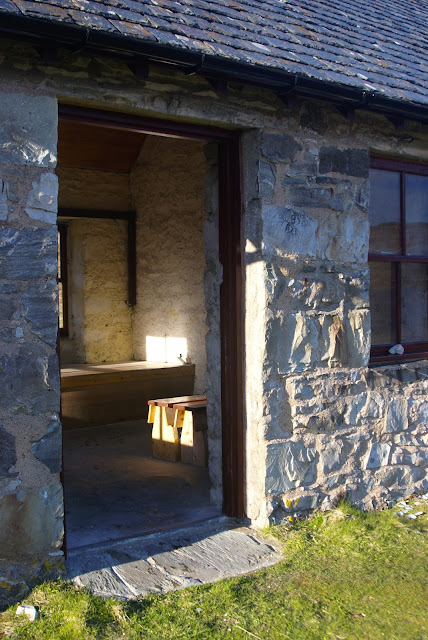 It takes a deal of faith and trust for estate managers and owners to permit use of buildings as open bothies - and a good deal of work and cooperation to keep the buildings in good shape.  The trust, reputation and experience which the MBA has built up over 50 years is critical in maintaining the unique bothy tradition - and it's why I'm a member.  Membership gives no "rights" to bothies or any particular privilege other than contributing to something which is a national treasure.

The estate end of Cruib Lodge appears to have originally been a deer larder.  The hooks for hanging carcasses are still in place on large overhead beams and the large apertures now glazed with sash windows would have contained not glass but slatted wooden covers to allow airflow whilst the carcasses were hung and butchered.  The amount and size of the windows in this end of the bothy make it perhaps one of the lightest and airiest of all bothy rooms; Mike and I chose to put our sleeping things in this end, while Douglas chose the other room which would be warmer as we lit a fire in the grate with the wood we'd gathered earlier in the day. 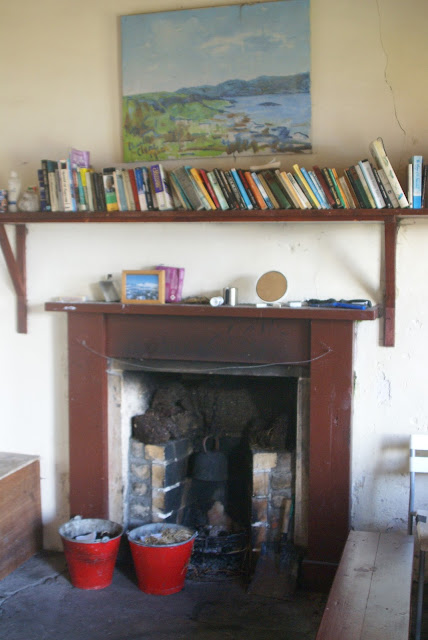 Above the fireplace is a well-stocked library, and it's the mark of a remote and well kept bothy that the books haven't been used as firelighters.  The peats placed around the fireplace were cut by Douglas' friend Tony who had visited some weeks previously and had left an entry in the bothy visitor's book.  After enjoying a great fire through the evening, we were able to add a good deal of dry logs to leave for the next occupants. 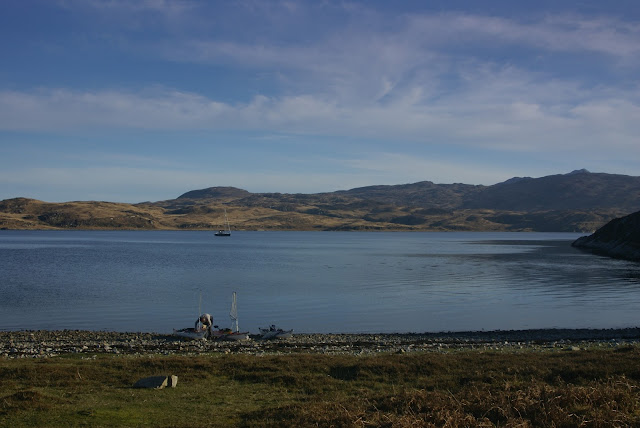 A yacht which had passed whilst we were exploring the raised beach in the outer loch was anchored in the bay and other than that there was no sign of any other human activity - it's a truly remote and wild spot.  After sorting out our kit and changing into evening attire (not vastly smarter than our paddling attire!) we cooked our dinner....... 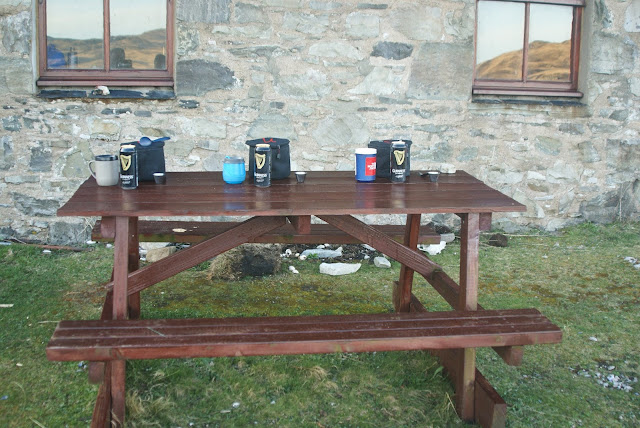 .....which was served, accompanied by frothing sports recovery drinks and a post-prandial dram of Jura Superstition distilled just 15km from where we were dining, at a table on the terrace with marvellous views...... 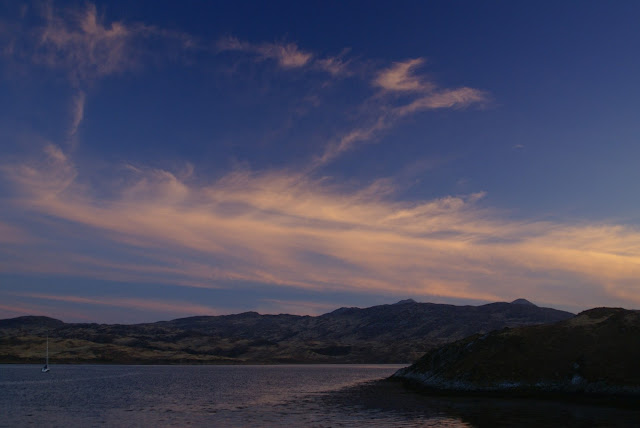 .....over the bay and of a sunset lighting up the clouds in ever changing shades. 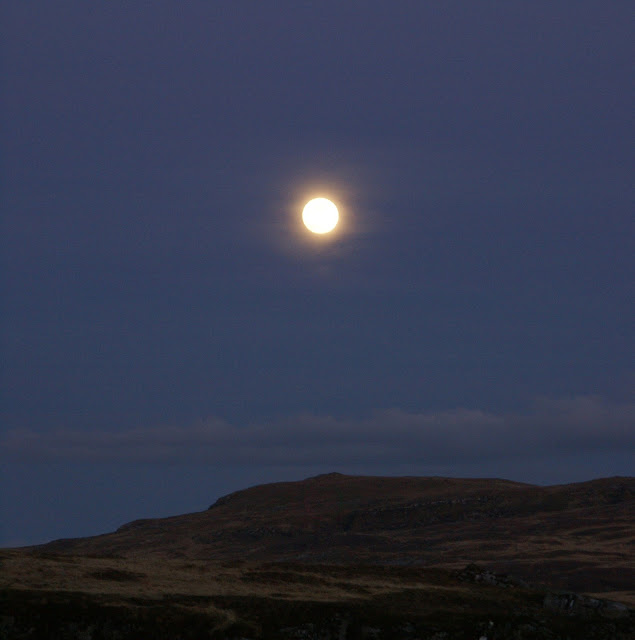 After dinner we got our fire going and sat chatting about this and other trips into the long Hebridean evening.  A glance outside showed a hazy full moon rising; a reminder that the following day would be Spring tides and that we needed to get an early start.

Alarm clocks set for 0500, we retired early and slept well after another great day on the west of Jura.
Posted by Ian Johnston at 10:38