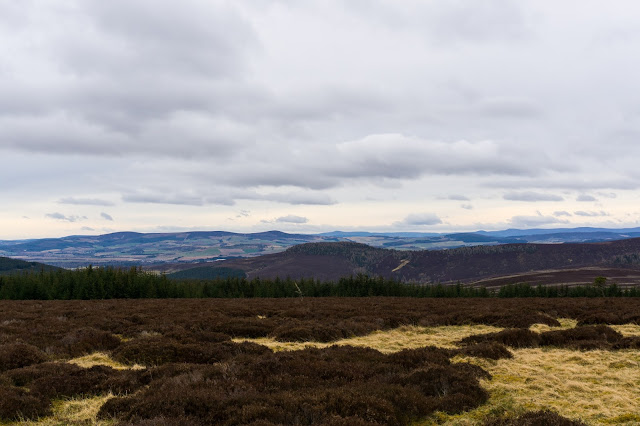 I was able to take a longer walk today, though still directly from home.  As last weekend, the Correen Hills were chosen to give good exercise with some wider views.  Pulling out of the forest, the light was dull and flat and a southerly wind which was the opposite direction from the previous week was quite raw.  Everything looked muted and dull and I wondered if I'd made the right choice. 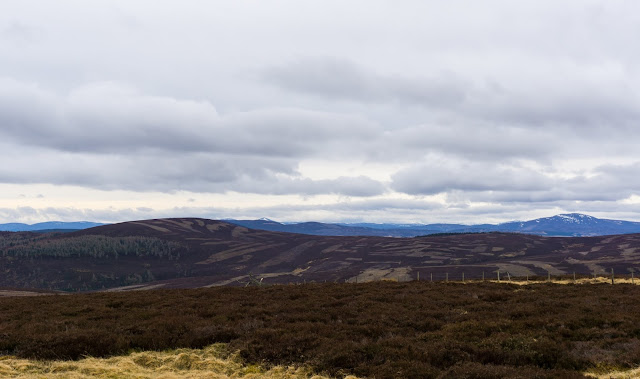 But then I stopped and listened.  Meadow Pipits were singing on their parachuting display flights, Snipe were making their "chip chip" ground calls and several overhead were in full display and making the weird noise with their outer tail feathers which gives them the nickname "air goats".  Skylarks were pouring out a torrent of cascading song from high above me, clear and carrying despite the wind.  A little further on and a Red Grouse burst from cover with it's distinctive "go-beck, go-beck" call.  And almost immediately, a gruff bark gave away a Roe buck bounding away; usually found in or near cover, I often see them on the open moor here.

A dull day was transformed by the sounds around me, the walk enhanced and enlivened.
Posted by Ian Johnston at 19:41 No comments:

Today's good and positive thing has been the sense of community which is being reinforced by adversity and challenge.  This is Thursday and at 8pm there was a tremendous racket from a scattered community applauding the efforts of NHS staff - pans clanging, car horns and applause.  All over the country pipers were also encouraged to play "Scotland the Brave" in their own addition to the support.

In smaller ways the sense of community is also being reinforced too.  Our small rural community has a network and people are organising for each other. 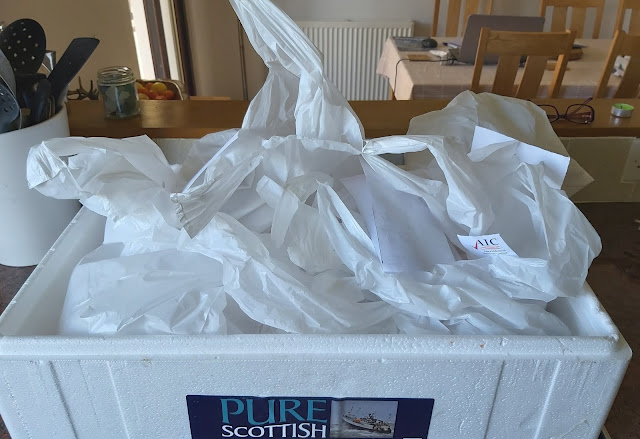 This box was delivered today and contains a pre-order of fresh fish delivered to one point for our community to collect.  Twelve orders of fish - landed last night and really fresh, as well as making good wholesome meals it will maintain small businesses and fishermen in a small way
Posted by Ian Johnston at 20:15 No comments:

Email ThisBlogThis!Share to TwitterShare to FacebookShare to Pinterest
Labels: "One Good Thing", food and drink, home 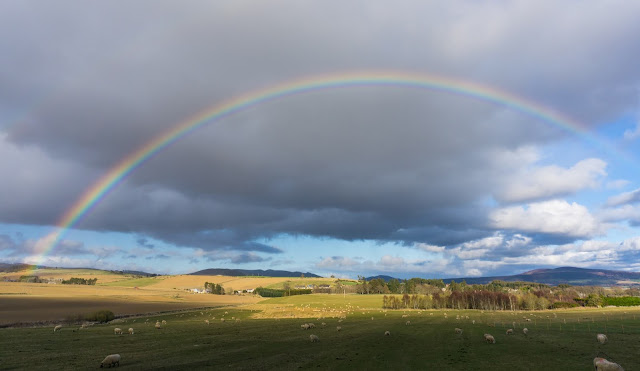 After a cold front passed over northern Scotland overnight, the air has been superbly clear.  A day of bright sunshine and some late showers produced a nice rainbow over the farmland and hills - very appropriate as the rainbow has been adopted as a symbol of both hope and to show support for the UK National Health Service during the Coronavirus pandemic..
Posted by Ian Johnston at 19:01 No comments: 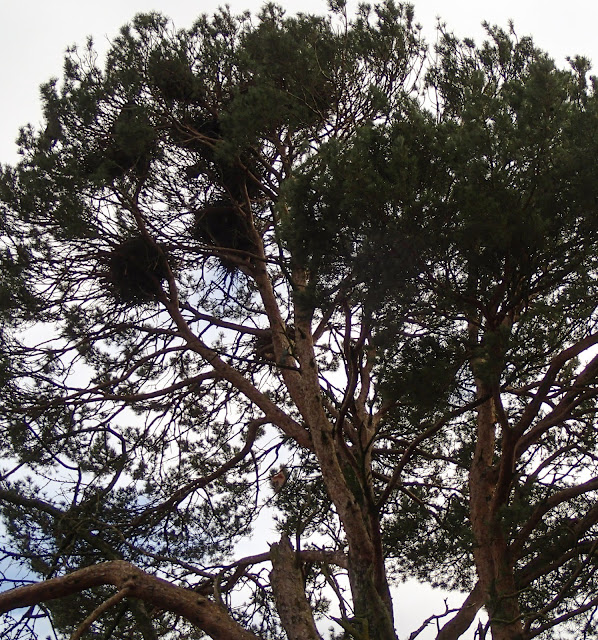 Just across from our house a group of Rooks (Corvus frugilegus) have built nests in the upperworks of a Scots Pine tree.  We've watched these fascinating and characterful birds in flocks through the winter, then as they re-established their pair bonds - one particular pair use a tree in our garden to display to each other; they are an obvious pair and it's possible to distinguish male and female by appearance as well as behaviour.

The birds usually nest in early February but were held back by the series of violent storms which crossed the UK.  Things are well underway now though, and today we thought that we heard the first higher pitched "caah" of a tiny young Rook...new life emerging.
Posted by Ian Johnston at 20:43 No comments: 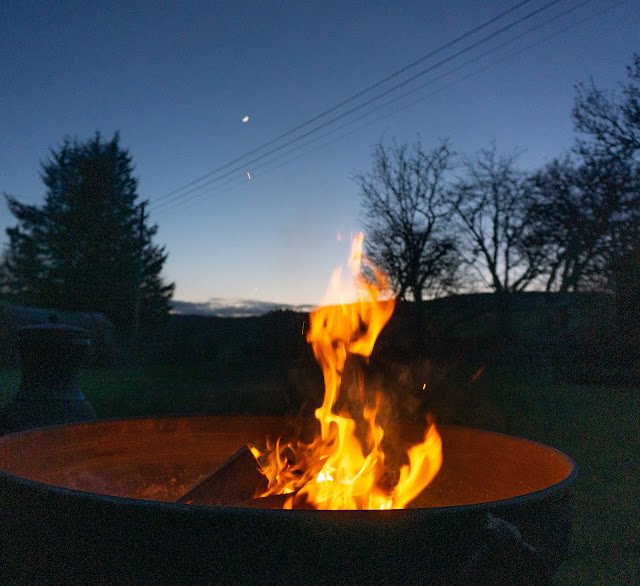 With the change to British Summer time early on Sunday 29th March, the evenings seem so much brighter and lighter.  Whilst we have to spend evenings at home, longer evenings are a boost.
Posted by Ian Johnston at 20:26 No comments: