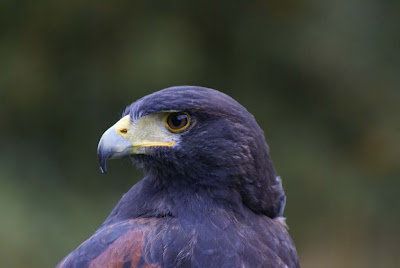 A highlight of the MOB weekend was a display of Falconry by one of the members, Theron. This is the gorgeous Ellie, a Harris's Hawk (Parabuteo Unicinctus). She's just over a year old and is still in training, but was beautiful to watch in action. 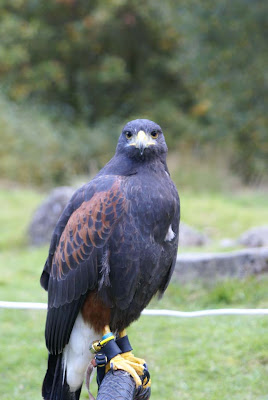 A Top Bird in every respect!
Posted by Ian Johnston at 14:46 No comments:

MOB Handed at a Birthday Party 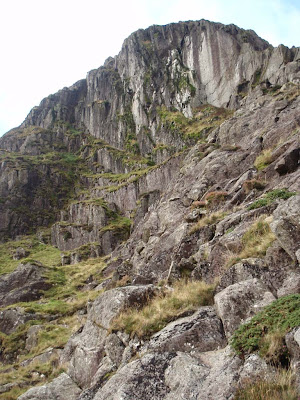 I've been in the English Lake District for a birthday party. It's the 30th birthday of my club, the Mountaineering Club of Bury (the MOB). I've been a member for nearly 20 years, and although I no longer live down in that area, have stayed a member. 86 members and families turned up at Borrowdale YHA for the meet. After socialising on Friday evening (where a moderate quantity of strong drink was taken) groups set out with a variety of plans on the Saturday. There were groups climbing, walking, scrambling, mountain biking and paragliding. I elected to join a group doing a walking and scrambling route from Borrowdale to Great Gable and back.

After walking to Seathwaite, where upwards of 200 cars were parked along the farm road, we climbed up Sour Milk Gill and into the vally of Gillercombe. Ahead lay the main scrambling, on Gillercombe Buttress. 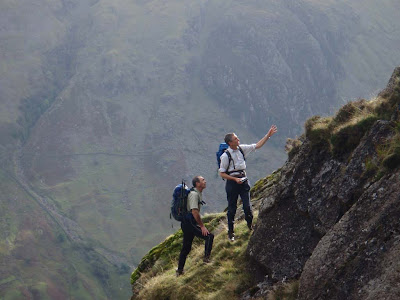 The scrambling on this buttress is in a really nice situation, and various combinations can be linked. Here Ian (our walking machine) points the way. 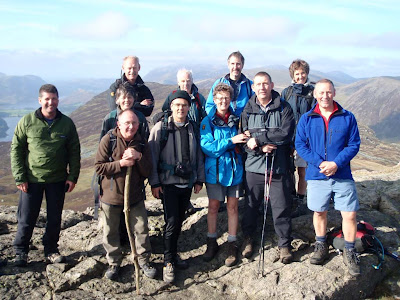 After topping out on Grey Knotts, we went over Brandreth and Green Gable to Great Gable. The group now comprised 11; here pictured on the return route at the summit of Brandreth. 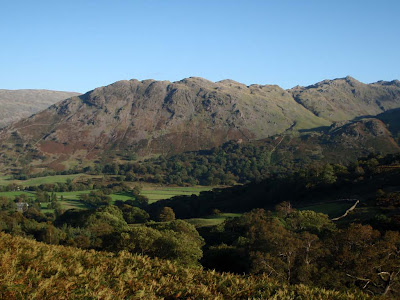 Our return then went via Honister Pass, where a cafe, slate mine visitor centre and the UK's only via ferrata are located. A moderate amount of strong coffee was taken.

The descent back to borrowdale was blessed with superb late sunshine and nice views - here across the head of Borrowdale towards Heron Crag. 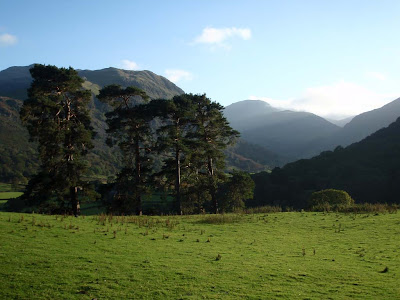 The evening light brought out the early autumn colours as we descended to Borrowdale. Shafts of low sunlight were flooding the vally with mellow golden colours.

An evening's entertainment, fine food and a moderate quantity of strong drink followed!
Posted by Ian Johnston at 13:19 No comments: 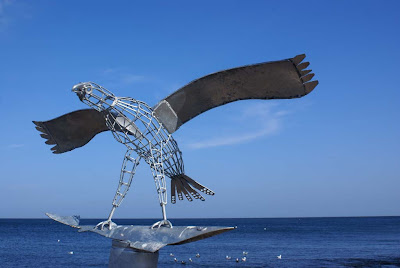 This striking sculpture is on the shore at Stonehaven. Although it's clearly an Osprey, we couldn't help thinking of the Iron Chicken, a character in the 1970's childrens programme "The Clangers"!
Posted by Ian Johnston at 13:39 2 comments:

NEOS - Art in the North East 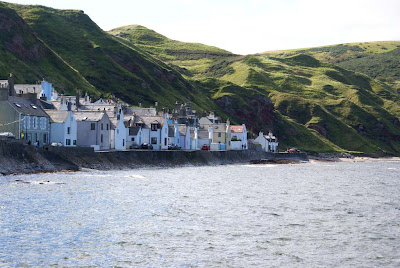 There's an annual arts festival in the northeast of scotland called NEOS (North East Open Studios). We visited some of the studios and galleries on a fine weekend. Many artists choose to live and work in fishing villages like Gardenstown. It's typical of fishing villages on this coast, built on a narrow strip of land between the sea and the cliffs with the gable ends of the houses facing the sea. Some of the villages originated as a result of people being cleared from the inland areas to the coast - a process more usually associated with the west coast. 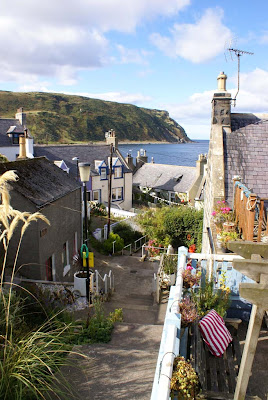 Gardenstown is a fascinating warren of narrow passages and steps on a steep slope. Between the houses there are tiny but sheltered areas where subtropical plants can be grown. 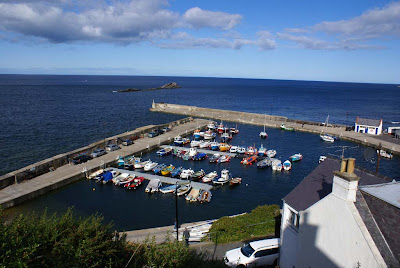 The harbour is comparatively large, and these days has more leisure craft than fishing boats. 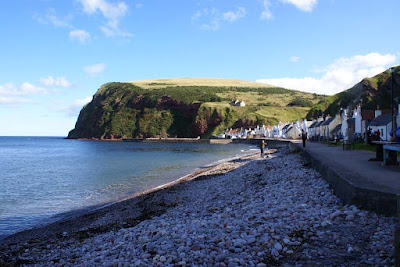 This is Pennan. The village is famous as the setting for the film "Local Hero". Most of the houses seem to be holiday homes now.
Posted by Ian Johnston at 13:22 2 comments: 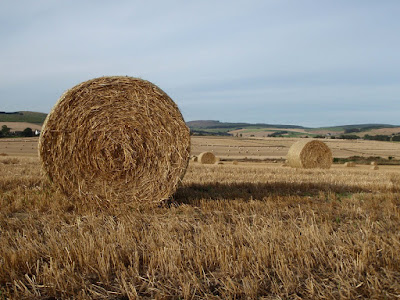 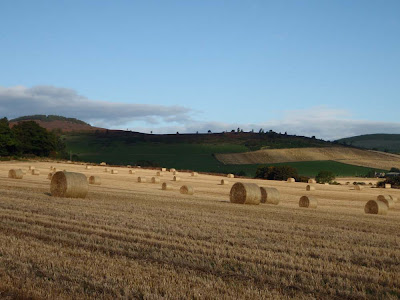 It's the autumnal equinox today. On the farms near where we live, all the barley is harvested and the fields are full of circular bales of straw. It's a pivotal point in the rural calendar.
Posted by Ian Johnston at 09:20 No comments:

The season is turning from late summer to autumn. A few weeks ago, green was the prevalent colour. This is the River Dee, downstream from it's confluence with the Geldie Burn

On a walk this weekend, we noticed that autumnal colours are here. We walked up the gorgeous Glen Quoich,then through to Glen Lui by the gash of the Clais Fhearnaig "notch of the Alder trees"

The lochan is artificial; there's a small earth dam at the north eastern end. It was dammed to provide fishing.

Looking back to Glen Quoich, the browns of autumn contrast with the dark green of the Caledonian Pine forest. The colours will develop in the coming weeks, especially once the frosts arrive.
Posted by Ian Johnston at 14:01 No comments:

We had a short break over in Arisaig during the middle of September. It was the start of a period of calm, settled weather, so we took our sea kayaks.

We stayed at the rather splendid Arisaig House Cottages

Our apartment was actually in the Clock Tower - very atmospheric, and fortunately the clock didn't chime between 10pm and 8am!

The paddling among the Arisaig Skerries is a bit special - it's been described as being like the Caribbean; and on days like this one can see why

The beaches are made of white shell sand

The scenery changes by the minute with the ebb and rise of the tide, and the water takes on wonderful colours

There are hundreds of Common Seals around here. They're incredibly curious and will come really close - they don't see paddlers as a threat. They're quite variable in colour, this one gracefully leaping to the water is particularly pale

And after a perfect day's paddling, the evening light was pretty special too

Posted by Ian Johnston at 20:34 No comments:

The 3rd and 4th of september 2009 were very wet. Heavy rain fell continuously for 36 hours, and the city of Aberdeen recorded it's wettest day for 60 years, with over three inches of rain.

We live near the River Don, which flows from the hills of the northeastern Cairngorms to the North Sea at Aberdeen. It's normally a fairly placid river

But by the afternoon of the 4th, it had become a broad torrent of brown water roaring down the valley - the difference in level can be seen from the post on the bank, normally the base is well clear of the water.

The water was between three and four feet higher than normal; in nearby Morayshire, the River Lossie burst its banks and flooded many homes and businesses. We're fortunate that there are relatively few flood prone areas in Scotland; most of the topography is arranged in a way that can shift large volumes of floodwater quickly.

Two days later, the river Don was back to its normal levels.
Posted by Ian Johnston at 10:14 No comments:

A hard winter to come?

The Rowan tree in our garden is absolutely laden with berries. Traditionally this is supposed to indicate a hard winter to follow. We'll see whether or not it's correct!

Posted by Ian Johnston at 15:57 No comments:

Back at the end of July there was a brief gap in the long series of Atlantic low pressure systems which have characterised the summer of 2009. I took the opportunity to get a couple of days sea kayaking at Arisaig. I left home at 5.45am and was paddling from Glenuig on Loch Ailort by lunchtime.

I headed east along the shore of Loch Ailort, then crossed the mouth of the loch and on across the mouth of Loch nam Uamh (loch of the caves). It was from this loch that Prince Charles Edward Stuart finally left Scotland in 1746 on a French ship after being on the run from the Hanoverian troops after the disaster of Culloden.

The weather was fine, but a NW'ly F4 was making for hard going. The wind was backing westerly and increasing as I paddled along the north shore of the Sound of Arisaig. Eventually I arrived at my camp site for the night - there have been worse spots!

I pitched up and paddled back a couple of kilometers to get additional water from a burn; the wind was still much in evidence

The view from above my tent took in Ardnamurchan Point in the south, Eigg and Rum in the west and Skye to the north

Sure enough, the morning dawned fine and with just enough breeze to keep away the midges

I've rarely had such a nice camping spot...

I headed off to the skerries off Loch na Ceall, where somebody has been relocating the road signs!

On the way back south I stopped by my camp spot for lunch. A guided group arrived soon after. If a day like this doesn't hook them on sea paddling, they have no soul!

An open crossing south across the Sound of Arisaig brought me to Smirisary, and another great view

And some nice pebble art

Just before arriving back at Glenuig, I had a close encounter of the Basking Shark kind. This chap was about 4 metres long, so by no means fully grown

There's a video clip of him at

Al in all, it was a cracking overnight trip
Posted by Ian Johnston at 19:51 No comments: