Per mare per terram - across an island 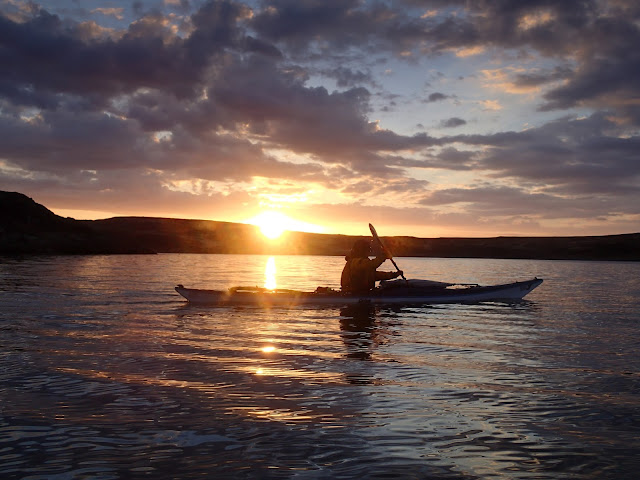 We slept well at Cruib Lodge, waking at at 0500.  After packing our boats and tidying the bothy ready for the next visitors we were pleased to be on the water as planned by 0600.  Unusually for us, first breakfast was postponed in order to get to the head of Loch Tarbert at high water.  The last morning of our Jura adventure began with a searingly bright sunrise...... 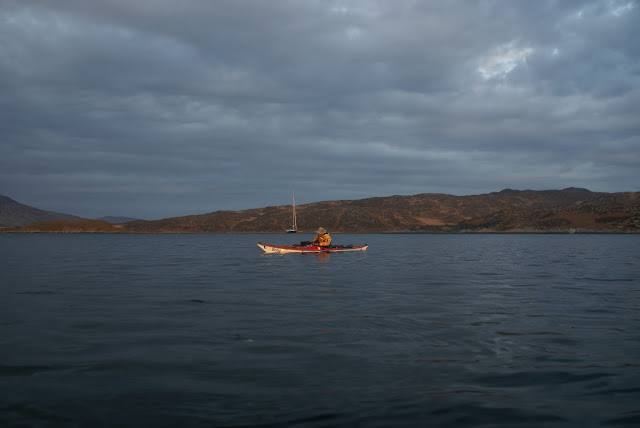 ...and a lovely quality of early morning light.  There was no sign of life on the yacht anchored in the bay, the only sounds were the dip of our paddles and the distinct calls of shorebirds creating a slight echo from the hills surrounding the middle part of the loch. 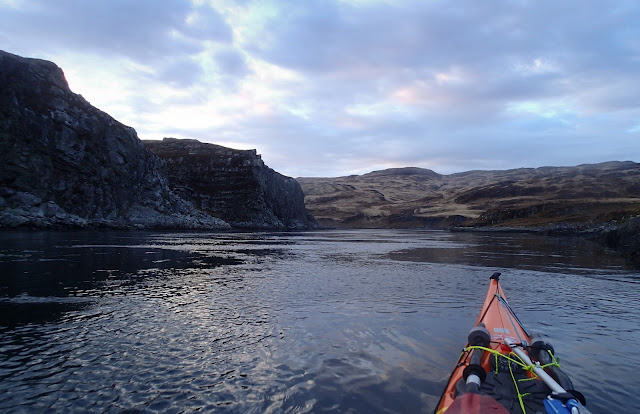 The channel connecting the middle section of West Loch Tabert with the hidden inner section is called the Cumhann Beag (Little Narrow) and that just about sums up this unlikely passage.  The entrance is very difficult to see and the passage itself is more like a canal than a channel.  Tidal streams can run at up to 8 knots (16 km/h) on Spring tides, one of the main reasons we'd started so early was to get the last of the flood through here.

The stream was still pushing though as we paddled the narrows; remarkably in this age of digital charts and maps when everything would seem to be well explored, the first survey of the Cumhann Beag was only undertaken in 2006 and even that may not be comprehensive.  The inner loch was historically used as a concealing base for longships and their Scottish equivalent, the Birlinns of sea raiders.  It's more peaceful today but remains a challenging anchorage for adventurous yachtsmen. 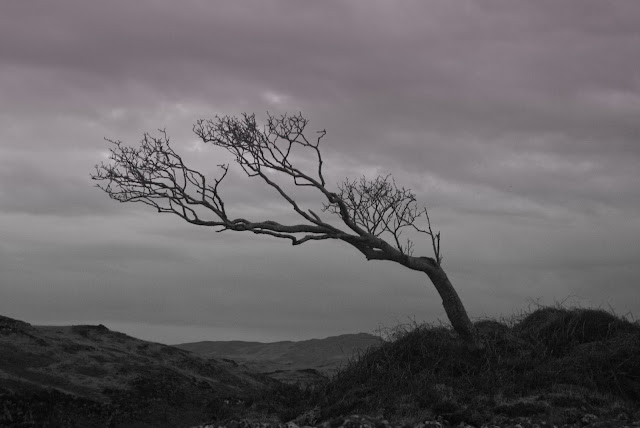 This tree growing from the west side of the channel clearly shows that it's not always calm in this part of the world! 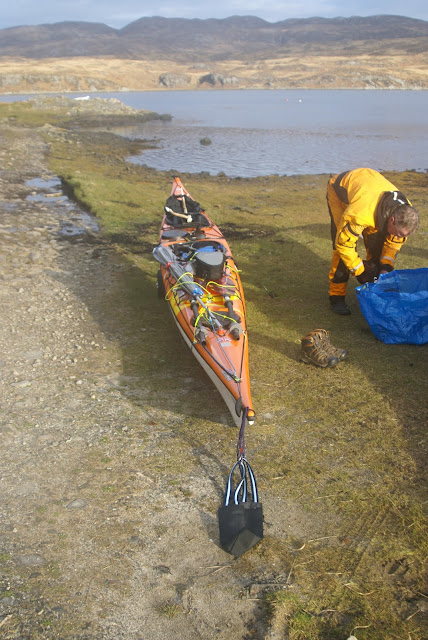 We reached the head of inner Loch Tarbert right on the time of high water, although the tide actually rose for some 40 minutes after this.  We were pleased to have avoided having to carry the boats over the mud which is revealed at lower states of the tide - this day was going to be energetic enough without an additional "plowter" through sticky mud!

The most important priority was to get tea and coffee brewed, after which our belated first breakfast was taken.  Then we rigged our boats for the next stage of the journey and changed out of drysuits into walking gear.

Between Loch Tarbert and Tarbert Bay, the island of Jura is less than 2km wide.  The name "Tarbert" is found in several places around the west of Scotland and derives from a Norse phrase meaning "draw boat"; a Tarbert being a place where a longship could be hauled overland from one body of water to another.  In at least one place, pulling a boat over a Tarbert was used to gain control over a large area of the mainland following an agreement that a Norse king could claim ownership of anything he could take his longship around!

This amphibious ability would have been most useful to seafarers in case of stormy weather, or as a flanking manoeuvre.  The Norse warbands were true "marine" fighters, using their shallow draught and manoeuvrable ships to access far inland, an amphibious ability which led them from their Scandinavian bases as far as North America, across the Arctic, down the Atlantic and Mediterranean coasts of Europe, to the Middle East and even far into Asia via river systems.  The motto "per mare per terram" (by sea and by land) is that of the UK's elite Royal Marines, and sums up this amphibious fighting capability.

In addition to sea raiding, the Tarbert was used to transport a range of goods and even bodies bound for burial on Iona as it avoided the fast tidal streams of the Corryvreckan and the Sound of Islay which flank Jura to north and south.

We aimed to emulate the Viking example (minus the raping, burning and pillage or course!....) by putting our boats onto the trollies for the 2km pull.  Douglas has been testing an Easy Haul Portage Strap made by Kayak Carrier Systems this year, and it works really well on a long portage such as this.  I tried out an arrangement using the short tow-line attached to the deck of my boat (which is one of those things which can be used in all sorts of ways) attached to a spare portage strap.  Once I'd adjusted for legth I found this worked very well, but is obviously less adjustable than the KCS shoulder strap.

The track across the Jura Tarbert is notoriously rough. The track is bumpy, stony and rises to around 30 metres above sea level before heading down to the east side of the island.  It's a noted destroyer of sea kayak trollies, but I'm pleased to report that our KCS Expedition trollies once again proved their worth; the addition of the rear extension prevented any movement of the trolley beneath the boat and all three made the crossing without a hitch - a truly tough piece of kit. 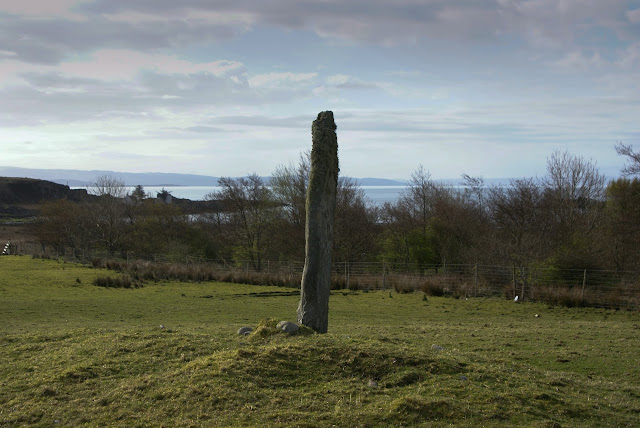 After crossing the high point of the crossing the track descends to cross the island's only road and enters the narrow strip of good agricultural ground on the east coast.  The underlying rock here is a schist which breaks down into much more fertile soils than the volcanic rocks elsewhere on the island.  It's land which has been farmed and lived on for thousands of years.  This slender 2.5m high standing stone is aligned N-S and is at the end of a low ridge near the remains of a later chapel and burial ground, indicating an ancient, continuing use.

Soon after, we arrived at Tarbert Bay on the east coast of Jura, and although the portage itself had been strenuous, it had presented little difficulty.  The final 10 metres to the sands of Tarbert Bay were another matter altogether though.....

Barring the way to the water was a wide swathe of rotting seaweed which was a calf-deep slime and absolutely stank - quite the worst example I've experienced for years.  We changed into drysuits and paddling boots before attempting this obstacle.  The stench was such that it attacked in a multisensory way and I found myself having to resist the urge to retch as we crossed it six times to move our three boats - fairly minging!  As soon as we reached the water we washed our drysuits and equipment clean of the vile residue. 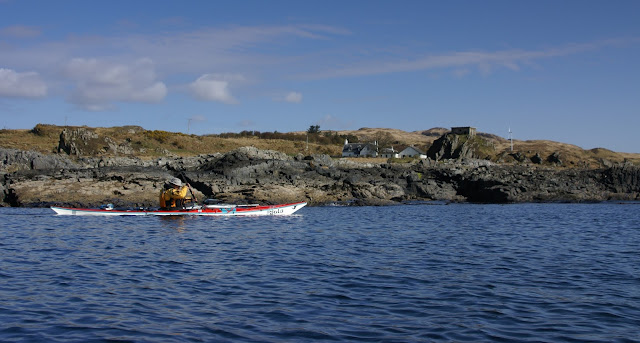 At last cleaned off, we set out from Tarbert Bay into the Sound of Jura "per mare" for the final leg of our adventure...
Posted by Ian Johnston at 20:57